We are happy to review queries for prospective articles. Please include a short summary, your name and email address with your submission.

IPDefenseForum.com provides U.S. Indo-Pacific Command a medium to provide information to senior members of foreign militaries and defense officials and security professionals, in many of our partners’ native languages and in an accessible format, to address issues of mutual concern and facilitate regional stability.

IPDefenseForum.com also serves as a venue for foreign contributors to express their opinions on military and security matters in the Indo-Pacific. These opinions do not necessarily represent the policies or viewpoint of this Command or any other agency of the U.S. Government.

Feedback: To contact the IPDefenseForum.com editorial staff, use the “About Us” tab, (https://ipdefenseforum.com/about-us/).

Corrections: To correct any errors of fact, please submit a request for a correction via the “About Us” link. We strive to promptly correct errors in material published digitally or in print. 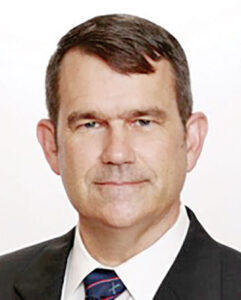 DR. ARTHUR N. TULAK is a research faculty member at Georgia Tech Research Institute and serves as advisor on information operations for the U.S. Indo-Pacific Command in Hawaii. His military experience as an executive-level leader in the U.S. Army and the U.S. Defense Department includes 18 years as an infantry officer and 14 years in information operations before retiring as a colonel. He holds a doctorate in education from the University of Southern California and master’s degrees in defense and strategic studies from Missouri State University and military arts and sciences from the U.S. Army Command and General Staff College.  Featured on Page 8 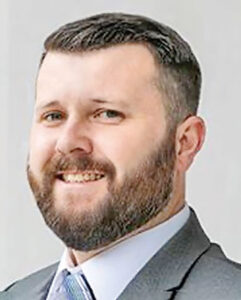 GREGORY B. POLING is a senior fellow with the Southeast Asia Program and director of the Asia Maritime Transparency Initiative at the Center for Strategic and International Studies (CSIS). He is an expert on South China Sea disputes and conducts research on United States alliance relations, democracy and governance in Southeast Asia and maritime security across the Indo-Pacific. 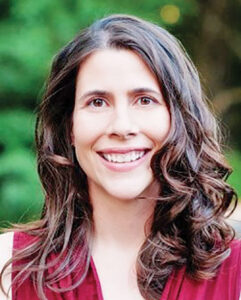 TABITHA GRACE MALLORY is founder and CEO of the China Ocean Institute and affiliate professor at the University of Washington Henry M. Jackson School of International Studies. She specializes in Chinese foreign and environmental policy, is conducting research on the People’s Republic of China (PRC) and global ocean governance and has published work on the PRC’s fisheries and oceans policy. 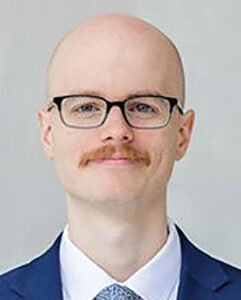 HARRISON PRÉTAT is an associate fellow with the Asia Maritime Transparency Initiative at CSIS. His research includes maritime disputes, U.S.-China relations, international economic engagement in Asia and challenges to international institutions in the 21st century.  Featured on Page 24 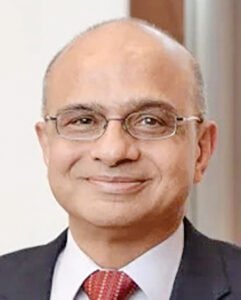 BRAHMA CHELLANEY is a geostrategist, scholar, author and commentator. He is professor emeritus of Strategic Studies at the Center for Policy Research in New Delhi; a Richard von Weizsäcker Fellow of the Robert Bosch Academy in Berlin; and an affiliate with the International Centre for the Study of Radicalization at King’s College London. He is the author of nine books, including the international bestseller, “Asian Juggernaut: The Rise of China, India, and Japan,” and award winners such as “Water: Asia’s New Battleground,” published by Georgetown University Press, and “Water, Peace, and War: Confronting the Global Water Crisis,” published by Rowman & Littlefield.  Featured on Page 30 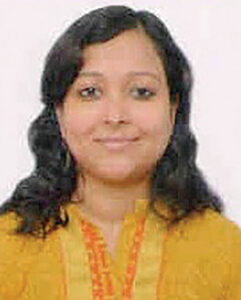 SAHELI CHATTARAJ is an assistant professor of China Studies at the Academy of International Studies, Jamia Millia Islamia University, New Delhi. She holds bachelor’s and master’s degrees in Chinese Language, Literature and Cultural Studies from Jawaharlal Nehru University and a Master of Philosophy in Chinese Studies from the School of International Studies, Jawaharlal Nehru University. Her research interests include contemporary India-China relations, politics and state and society relations in China, environmental governance in China and contemporary Chinese literature.  Featured on Page 36 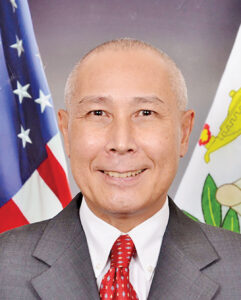 DR. ALFRED OEHLERS joined the Daniel K. Inouye Asia-Pacific Center for Security Studies (DKI-APCSS) in March 2007. Specializing in the political economy of economic growth and development in the Indo-Pacific region, he has taught and written extensively on a range of issues, many connected with the rapid development of East and Southeast Asia, as well as the Pacific islands region.
Featured on Page 10 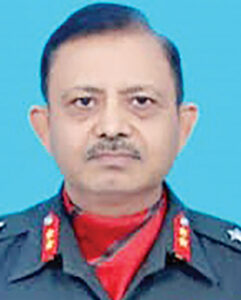 RETIRED INDIAN ARMY MAJ. GEN. S B ASTHANA is chief instructor of the United Service Institution of India, the nation’s oldest think tank. A strategy and security analyst, he is a decorated infantry general with 40 years of experience in national and international assignments, including at the United Nations. He has written over 400 articles about strategy and the military. Featured on Page 14 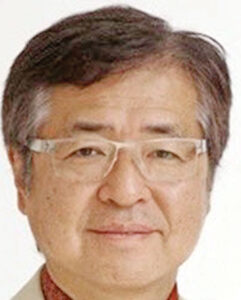 NOBUKATSU KANEHARA is a professor at Doshisha University in Kyoto, Japan. He was assistant chief cabinet secretary to then-Japanese Prime Minister Shinzo Abe from 2012-19. In 2013, he became the inaugural deputy secretary-general of the National Security Secretariat and also served as deputy director of the Cabinet Intelligence and Research Office. His career includes stints in the Ministry of Foreign Affairs as director-general of the Bureau of International Law and deputy director-general of the Foreign Policy Bureau. Featured on Page 20 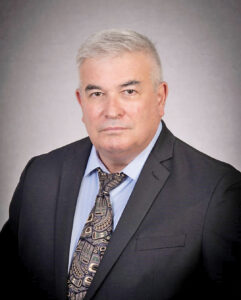 RETIRED UNITED STATES NAVY CAPT. RAUL PEDROZO is the Howard S. Levie professor on the Law of Armed Conflict at the U.S. Naval War College’s Stockton Center for International Law. He served in numerous positions advising senior military and civilian defense officials, including as special assistant to the U.S. undersecretary of defense for policy and senior legal advisor to the commander of U.S. Indo-Pacific Command. He has lectured at myriad academic institutions and written extensively on maritime security and South China Sea issues and is the co-author of several books, including “International Maritime Security Law.” Featured on Page 42 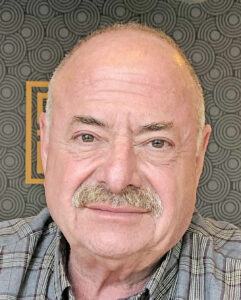 RETIRED U.S. NAVY REAR ADM. MICHAEL BAKER has experience in strategy, contingency planning, overseas deployment operations and multinational exercises. He has taught combat casualty care, triage and trauma care, and response to complex disasters and humanitarian emergencies. He has published over 70 peer-reviewed articles and has lectured at numerous international conferences. 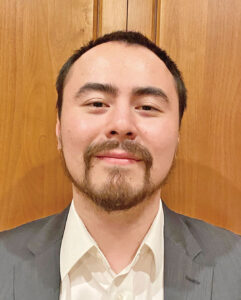 JACOB BAKER earned a Master of Professional Studies in the Applied Intelligence Program at Georgetown University School of Continuing Studies. He has co-authored articles on the intersection of intelligence, global health, pandemic surveillance and national security. 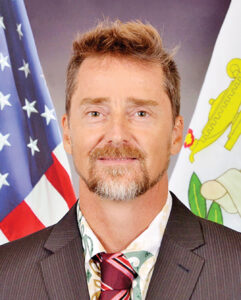 DR. DEON CANYON, a professor at DKI-APCSS, specializes in crisis management, biosecurity, the Pacific islands region and gray-zone gaming. His research focuses on understanding, managing, controlling and preventing complex and dynamic security threats with innovative approaches. He has authored hundreds of articles during his 29 years at DKI-APCSS and other U.S.and Australian institutions. 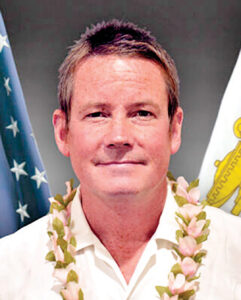 DR. SEBASTIAN KEVANY, a professor at DKI-APCSS, is a specialist in health security, health diplomacy, health as foreign policy, international relations, epidemics, pandemics and global public health. He has also done extensive fieldwork as part of more than 100 missions to Africa, the Middle East and the Pacific island region.  Featured on Page 46 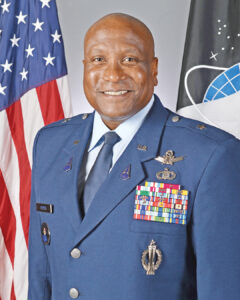 BRIG. GEN. DEVIN R. PEPPER is deputy director of the Strategy, Plans and Policy Directorate (DJ5), United States Space Command. He is responsible for developing military strategies, issuing strategic guidance, planning military campaigns and contingency operations, and formulating policy in support of combatant commanders’ responsibilities outlined in the Unified Command Plan. He enlisted in the U.S. Air Force in 1989 and received his commission through the Officer Training School in 1996. He is a graduate of the U.S. Air Force Weapons School (Space Superiority Squadron) and has commanded at the squadron, group, Air Force wing and Space Force garrison levels. Prior to his current position, he was commander of Buckley Garrison at Buckley Air Force Base, Colorado.  Featured on Page 24 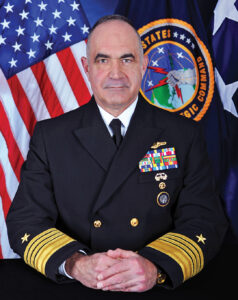 U.S. NAVY ADM. CHARLES “CHAS” A. RICHARD is the commander of United States Strategic Command and is responsible for the global command and control of U.S. strategic forces. He graduated with honors from the University of Alabama in 1982 before earning master’s degrees with honors from Catholic University of America and the Naval War College. He recently served as commander of Submarine Forces in Norfolk, Virginia. Other flag assignments included deputy commander, U.S. Strategic Command; director of undersea warfare at the Pentagon; deputy commander of Joint Functional Component Command for Global Strike at U.S. Strategic Command; and commander of Submarine Group 10 in Kings Bay, Georgia.  Featured on Page 28 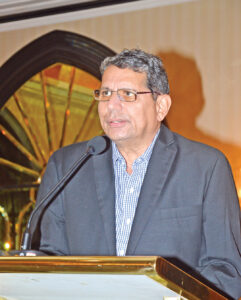 SAROSH BANA is the executive editor of Business India in Mumbai; regional editor, Indo-Pacific region of Germany’s Naval Forces journal; and the India correspondent for the Sydney-based cybersecurity journal Asia Pacific Security Magazine. His work focuses on defense and security, cybersecurity, international affairs, policy and strategy, space, power and energy, and environment and conservation. He studied in India, Switzerland and Germany and has been a board member of the East-West Center Association, a Hawaii-based think tank.  Featured on Page 42

DR. DEON CANYON, a professor at the Daniel K. Inouye Asia-Pacific Center for Security Studies (DKI-APCSS), focuses on crisis management, biosecurity, the Pacific islands region and gray-zone gaming. His cross-disciplinary research concentrates on understanding, managing, controlling and preventing complex and dynamic security threats with innovative approaches. He has authored over 240 publications during his 29 years at  several Australian and U.S. universities and institutions, including DKI-APCSS.

DR. SEBASTIAN “BASS” KEVANY, a professor at DKI-APCSS, is a specialist in health security, health diplomacy, health as foreign policy, international relations, epidemics, pandemics and global public health. Within these realms, he is experienced in the fields of monitoring and evaluation, cost-effectiveness analysis, diplomacy, national and international security, conflict resolution, and the use of public health and epidemic control programs to prevent or resolve international conflict. He also has fieldwork experience from more than 100 missions to the Middle East and North Africa, the Pacific islands and Sub-Saharan Africa.  Featured on Page 60

Back to top button
Close