The 21st century has proved to be big business for the organ transplant industry in China, which gained a reputation as the go-to country for medical tourists. Though documented cases of organ donations were few, the list of available organs for transplant remained plentiful, and the wait for a suitable match was as short as a few days to a couple of months. That type of availability and speed doesn’t happen in other countries.

“In China, the organs come easy,” an unnamed senior nurse said in Killing to Live: The Dark Side of Transplant Tourism in China, a 2017 documentary investigating Tianjin First Central Hospital, an organ transplant center in China. “It takes just two hours for them to bring the fresh organs here,” the nurse said, reporting that a liver costs U.S. $130,000, according to The Epoch Times newspaper, which was founded by Chinese-American Falun Gong practitioners.

Mounting suspicion and scrutiny concerning China’s organ transplant business prompted the Chinese Communist Party (CCP) to create a national organ distribution system in 2013. Medical experts had long suspected that the sources of the abundance of organs available for transplant in China were political prisoners — practitioners of the forbidden spiritual movement Falun Gong, Uighur Muslims, Tibetan Buddhists, underground Christians and other supposed dissidents — who had been subjected to medical testing behind bars and whose organs were forcibly removed. 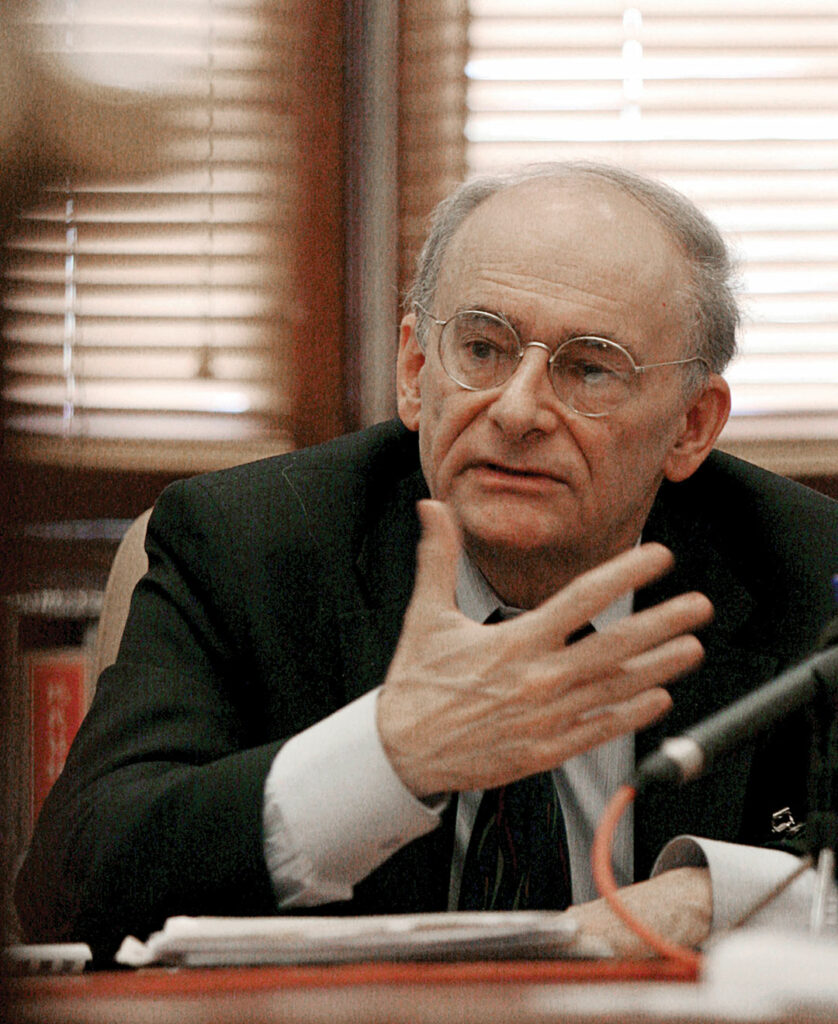 David Matas, who co-authored reports on organ harvesting in China, speaks about his research at a conference in Hong Kong. AFP/GETTY IMAGES

The CCP continues to deny claims that its authorities forcibly removed organs, and as recently as April 2019, ignored yet another request to appear before the tribunal in London regarding these accusations.

The denials haven’t stopped researchers such as David Matas, David Kilgour and Ethan Gutmann from continuing to ask questions. Matas, an international human rights lawyer; Kilgour, a former Canadian parliamentarian; and Gutmann, a China analyst and human rights investigator, published in June 2016 a nearly 700-page update to investigations and reports they produced 10 years prior.

The latest report, “Bloody Harvest/The Slaughter,” examines the transplant programs of hundreds of hospitals in China, media reports, official propaganda, medical journals and other materials. Their research exposes data that prove Chinese officials perform upward of 60,000 to 100,000 transplants per year, contradicting official government claims that it only performs 10,000 and casting doubt that the PRC’s revamped organ distribution center has slowed its abhorrent practices.

“The fact that the evidence we have now examined shows much larger volumes of transplants than the government of China has asserted points to a larger discrepancy between transplant volumes and government of China-identified sources than we had previously thought existed. That increased discrepancy leads us to conclude that there has been a far larger slaughter of practitioners of Falun Gong for their organs than we had originally estimated,” the “Bloody Harvest” report stated. “Even with the volumes of transplants the Chinese government has asserted in the past, there is a substantial discrepancy between the number of transplants and the number of sources which the government of China has identified — prisoners sentenced to death and voluntary donors. This discrepancy is one reason, among several, that led us in the past to the conclusion that the above groups have been the source of many, and indeed most, organs for transplants.”

Matas, Kilgour and Gutmann notably use the term “organ harvest” — which denotes the illegal practice of removing organs from individuals — dead or alive — without their consent. 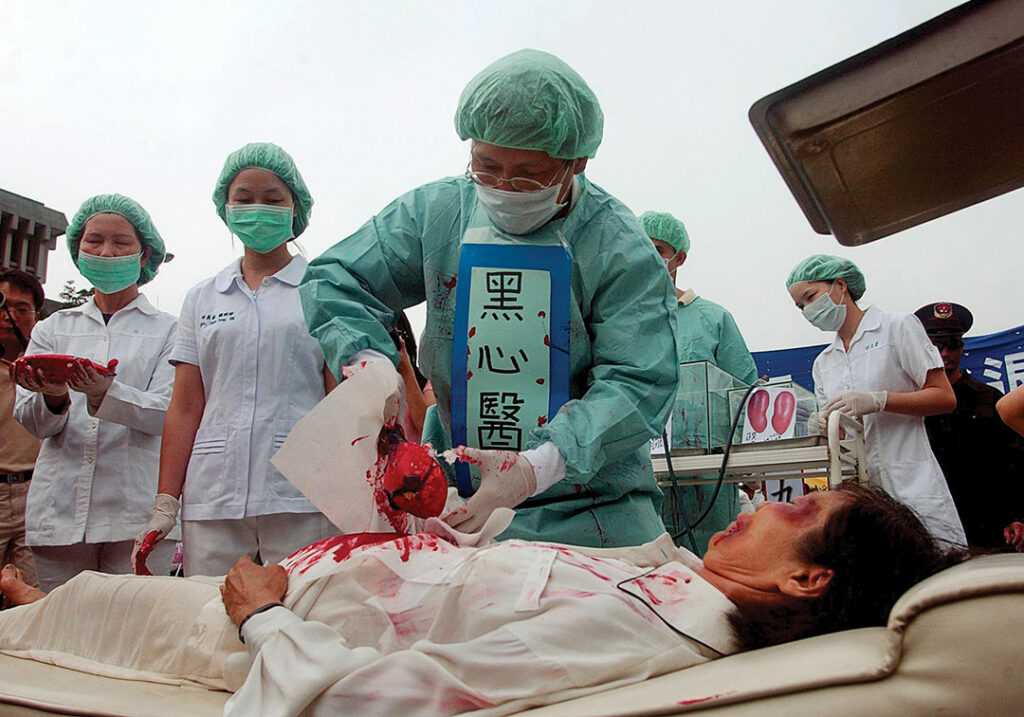 Falun Gong members demonstrate an organ harvesting procedure as they protest the alleged practice by the Chinese Communist Party. THE ASSOCIATED PRESS

International norms, however, do exist. The World Health Organization (WHO) published “Guiding Principles on Human Cell, Tissue and Organ Transplantation” that clarifies the international standards for transplanting organs. Endorsed in May 2010, the principles preserve essential points of a 1991 version while incorporating new provisions in response to current trends in transplantation, particularly the protection of the living donor, and the increasing use of human cells and tissues.

“The work of promotion of respect for human rights is not solely or even primarily the work of governments. It is the work of individuals everywhere, those to whom human rights belong. The killing of innocents in China for their organs is an atrocity which must concern us all,” Matas, Kilgour and Gutmann wrote.

Through their research, the men identified transplant recipients who later learned their donor had died during the extraction procedure and have expressed their shock over the gruesomeness of organ harvesting. “I was astonished to hear about the source of the organs. I felt very sad that I participated in such [a] thing,” Taiwanese resident Rourou Zhuang, who received a new kidney in China, said in the documentary Human Harvest, according to The Epoch Times. “I want to tell my story so that people can know about it.”

Hokamura Kenichiro, a Japanese patient, was shocked at how easy it was to get a new kidney. Ten days after he spoke with a Japanese broker in China, he found himself on a Shanghai operating table with a doctor who had only examined him the morning of the procedure.

“It was so fast, I was scared,” he said, according to The Epoch Times.

Oftentimes, people travel to China in groups for organ transplants. In 2001, for example, a broker arranged for nine patients from Southeast Asia to travel to Taiping Hospital for procedures. Doctors completed all nine transplants in two days, according to “Bloody Harvest/The Slaughter.”

In another instance, seven patients traveled from Hong Kong to China for kidney transplants. Doctors performed them all in the same day, and the patients went home a week later, the report said.

“Considering transplant volumes, hospital by hospital, doctor by doctor is, in China, a mammoth task. There are almost nine hundred hospitals and between nine and ten thousand medical personnel engaged in transplants. Moreover, cover-up is not just in China an aggregate, national phenomenon. It exists as well at the doctor and hospital level,” Matas, Kilgour and Gutmann noted. “Nonetheless, to get a grip on transplant volume figures, it is a task which must be undertaken.”

Several countries have held hearings on CCP organ harvesting. Spain, Italy and Israel are among those that prevent their citizens from traveling abroad for transplants.

In the absence of any official Chinese response or evidence to the contrary, the Independent Tribunal Into Forced Organ Harvesting from Prisoners of Conscience in China has entered an interim judgment against the CCP condemning the Chinese government of illegal organ harvesting based on witness accounts and reports it has reviewed.

“The tribunal’s members are all certain — unanimously, and sure beyond reasonable doubt — that in China, forced organ harvesting from prisoners of conscience has been practiced for a substantial period of time involving a very substantial number of victims,” reads the interim judgment published by the tribunal in December 2018. A final judgment is expected in June 2019.

“We will deal in our final judgment in detail with our findings as to whether any international crimes have been committed by this practice, if so by whom and with detail as to time periods and numbers of victims. This final judgment will be derived from our further analysis of present material and other material yet to be provided and to legal advice yet to be received,” the interim judgment stated. “But — to repeat — it is beyond doubt on the evidence presently received that forced harvesting of organs has happened on a substantial scale by state-supported or approved organizations and individuals.”

The tribunal stressed that its conclusion is driven by evidence. Should evidence come later — from doctors, academics or Chinese government officials — the tribunal has said it would weigh that evidence just as if it had been presented in due course during the regular hearings with other evidence.

“We have to have in mind how the repeated accounts in reports of forced harvesting of organs in the PROC [People’s Republic of China] — even those reports that have touched on possible criminality — have not, so far as is known, had any or much effect on transplant practices in the PROC,” the tribunal said. “It is possible that the clear and certain finding — beyond reasonable doubt — that we make about forced organ harvesting, although not by itself and at this stage a finding of international criminal liability, will have a direct effect on the PROC or on those with whom it interacts. They should, once aware by our judgment or otherwise of the practice in China of forced organ harvesting, reflect on any support they effectively give by engaging with the PROC.”

In the meantime, and in another attempt to continue shedding light on this once secretive Chinese practice, authors of “Bloody Harvest/The Slaughter” urge anyone with further knowledge of China’s organ harvesting techniques to share that information — anonymously if necessary — by contacting ChinaOrganHarvest.org in either Chinese or English, Doctors Against Forced Organ Harvesting, or EndOrganPillaging.org in English.