Can the success story be applied to Southeast Asia?

The increased dependency and density of the shipping trade has fueled the rise of maritime crime around the globe. Threats such as piracy, maritime terrorism, drug trafficking and gun running have become more potent and given rise to strident calls for effective law enforcement and maintenance of maritime order.

These challenges highlight the need for cooperating across political boundaries along with the necessity of sharing intelligence. This holds special significance for anti-piracy patrols off the Horn of Africa. They operate in a vast area looking for small bands of pirates that attack from highly maneuverable and powerful skiffs, under the umbrella of nearby mother ships. Without intelligence sharing between patrols, it is unlikely they would have much success in achieving their objectives.

The Shared Awareness and Deconfliction (SHADE) initiative was born out of this necessity as a number of foreign navies operated in the Gulf of Aden to prevent attacks from pirates from Somalia and Puntland.

Individual navies such as those from China, India and Japan became part of the initiative in 2012, when it was first implemented. They coordinated their merchant vessel escort convoys through the Internationally Recognized Transit Corridor, with one country being “reference nation” for a period of three months on a rotational basis. In June 2012, South Korea joined the initiative.

SHADE was not designed to coordinate any naval or military operations; instead, it has held meetings in Bahrain attended by military and civilian representatives from 33 countries, 14 international organizations, maritime industry groups and several governments. The meetings are co-chaired on a rotational basis by three key groups: Combined Maritime Forces, NATO, and EU NAVFOR. The idea is to share information and intelligence and best practices against the scourge of piracy.

Two types of intelligence have been shared at these meetings: strategic and tactical long-term information and data. Immediate tactical intelligence, however, is shared between ships on secure communication networks such as the Mercury platform for providing assistance in convoy security. 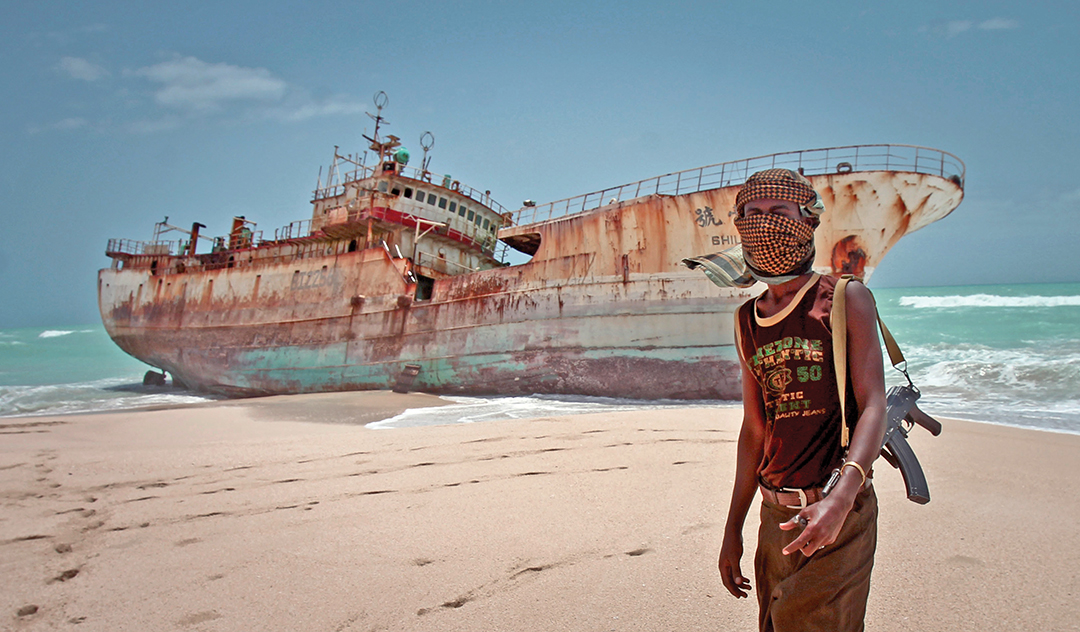 Masked Somali pirate Abdi Ali stands near a Taiwan fishing vessel in September 2013 that washed ashore in Hobyo, Somalia, after pirates were paid a ransom and released the crew. [THE ASSOCIATED PRESS]

Dubbed the Facebook of counterpiracy, Mercury provides chat facilities as well as daily operational updates. This network led to the formation of an Escort Convoy Coordination Working Group primarily to hold regular meetings and communicate on Mercury if required.

In addition to sharing information, SHADE has also provided support to the implementation of the fourth version of the shipping industry’s Best Management Practices (BMP4) for Protection against Somali Based Piracy, which was also endorsed by EU NAVFOR.

Since joining the initiative, the Indian Navy participated in SHADE meetings despite reservations from certain sections in the Indian government. Those sections were keen to broaden the fight against piracy, and Indian delegates also attended meetings of the United Nations contact group on piracy in New York. This was obviously a preferred destination for the delegates.

However, for the Indian naval warships in the region, SHADE provided an opportunity to imbibe information for their piracy patrols, and active participation by the delegates was the norm. In most cases, the inflow of information was much more than the outflow, given the variety of inputs available to the initiative.

The importance of SHADE increased recently when it was tasked to provide an expert opinion about the feasibility of reducing the high-risk area (HRA) for piracy as denoted in the BMP4 document.

The number of piracy attacks has dropped precipitously in the region, but due to the denoted HRA, merchant ships traversing the area continue to pay higher insurance premiums. This has led to demands for a drastic reduction and a reappraisal of the denoted HRA.

While a debate exists about the suitability of using SHADE for such an exercise, the salience of the initiative has greatly been enhanced from the perspective of the Indian government. As it awaits the initiative’s report on the sensitive HRA issue, it is evident that SHADE wields considerable influence in determining the economic compulsions of commercial shipping — an aspect that may well go beyond its charter.

While the initiative for exchange of information/intelligence is an essential tool against transnational crimes like piracy, all such efforts are essentially constrained by certain systemic gaps.

Basic trust is a bedrock of any cooperation or information exchange, but such exchanges may suffer in the Southeast Asian region where mutual trust is at a low level and the universal “need to share” policy followed at a minimum by most navies. 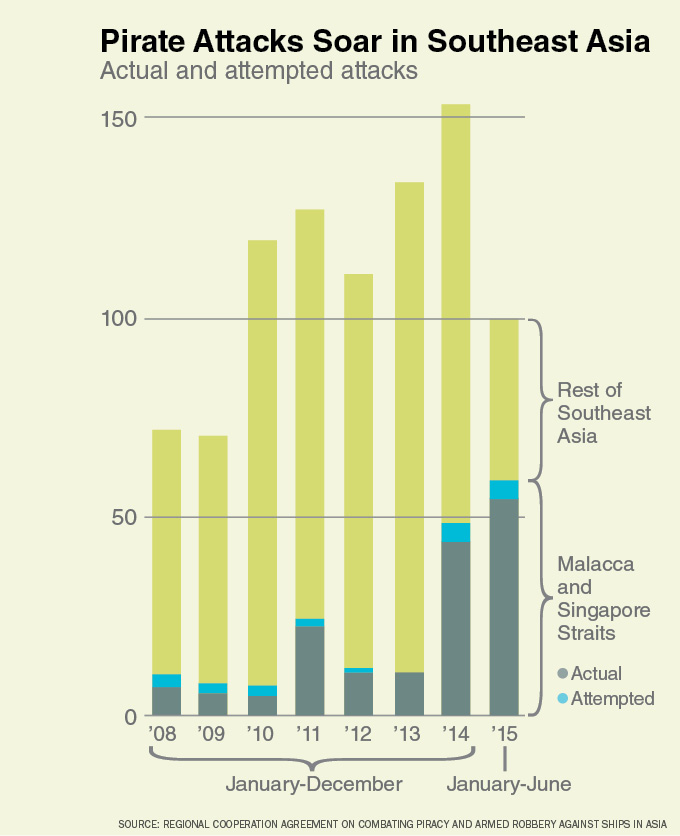 All navies operating in the Gulf of Aden have their own rules of engagement that reflect national priorities and are mostly classified. This causes barriers to the exchange of information and the ability to act in consonance with provided intelligence.

Most naval forces are loathe to consider the personal ambition among young “upcoming” warship captains on patrols as a factor in information sharing. They fail to realize that many captains would often prefer to carry out operations against pirates themselves (unless acting in a formation under a superior officer present afloat), thus bringing personal glory rather than providing information for other foreign navies to act.

Moreover, navies have a particular ethos of operation and a methodology of working that is unique to that force. Frequent combined or joint exercises can bridge these gaps, but they are unlikely to eliminate them altogether. Hence, achieving a degree of interoperability between coalitions and between ships on independent patrol is dependent on assorted variables, such as the degree of professionalism displayed and interoperability achieved.

Given these inherent gaps in such initiatives, it is worth looking at the viability of applying SHADE in the other regions of Asia such as Southeast Asia.

The rising number of piracy incidents in Southeast Asia has undoubtedly created a dire need for a formalized information-sharing mechanism, such as SHADE. The region, however, is congested by littorals with a strong sense of sovereign responsibility and is home to some of the most contested waters in the world. That was likely the reason programs such as the Malacca Strait Coordinated Patrol by Malaysia, Singapore and Indonesia and various phases of Eyes in the Sky air patrol suffered serious problems in the initial years apart from operational availability. These problems were subsequently overcome.

Given the possible hurdles that initiatives could face in the region, it is pertinent to examine issues that still need to be overcome.

a) Regional rivalries between nations often erode trust between the littorals. For example, Malaysia and Indonesia are still at odds despite having an effective Prevention of Incidents at Sea Agreement between the navies. Thus, with the waxing and waning of mutual trust despite having the Malacca Strait patrol in place, exchange of active intelligence may prove difficult at times.

b) All the littorals have widely differing maritime capacities, which is likely to produce friction between the navies when they are operating in close quarters and acting on the available intelligence.

c) Differing national geostrategic priorities naturally assume significant proportions in any joint operations at sea. This would have an effect on exchange of information and intelligence. It’s important to develop a common matrix and find a common interest to help in information exchange.

While these hurdles may be faced by any new, well-intentioned initiative in the region, others could affect its operation:

1.  The region already has the Information Fusion Centre operating from Singapore successfully since April 2009. The charter of the new initiative would do well not to duplicate its task.

2.  As part of anti-piracy measures in the region, the Regional Cooperation Agreement on Combating Piracy and Armed Robbery against Ships in Asia (ReCAAP) has been particularly active. Its success has fostered the growth of an expanded ReCAAP, which is likely to have a wider geographical range and more members. The new initiative should not duplicate the task of the existing systems and should help in anti-piracy measures.

3.  The formalized information exchange architecture of the Association of Southeast Asian Nations (ASEAN) could also function under the aegis of the existing ASEAN Defense Ministers Meeting (ADMM), which is the highest defence consultative and cooperative mechanism in ASEAN. It could also work for the bigger ADMM plus, which is a platform for ASEAN and its eight dialogue partners to strengthen security and defence cooperation for peace, stability and development in the region.

Cooperation between maritime forces, along with an active exchange of information and intelligence, are potent weapons to fight against the rise of transnational maritime crimes, including terrorism, illegal migration, drug/arms running and piracy. SHADE has been particularly successful in the Gulf of Aden in fighting piracy.

Given the spurt of maritime crimes in Southeast Asia, such an effort would not only improve maritime domain awareness but also help stabilize this turbulent region and serve as a practical confidence-building measure. The new initiative could help overcome the various gaps and prove beneficial for the common good while helping to maintain order at sea.