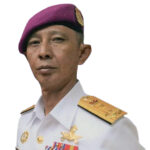 First Adm. Dato Anuar bin Hj Alias of the Royal Malaysian Navy Special Forces spoke with FORUM on the sidelines of the Pacific Area Special Operations Conference (PASOC) in April 2019 in Honolulu, Hawaii. He has held several posts in Pasukan Khas Laut (PASKAL), the main special operations force for the Royal Malaysian Navy, including commanding officer and chief of staff at the Naval Special Forces headquarters, during his 38 years of service.

FORUM: Please tell us more about your career path. Why were
you attracted to a naval career, and what do you think enabled
you to succeed?

Alias: I wanted to join the Navy since I was a child. One fine day during an exhibition in 1972, I was exposed to naval forces for the first time. I saw the white uniform and fell in love and knew I wanted to be in [the] Navy. I joined in 1981, and my qualification allowed me to join as a cadet officer. I immediately loved the job. I think that is the recipe that made me succeed. The chemistry was right, and I made a career as a naval officer. 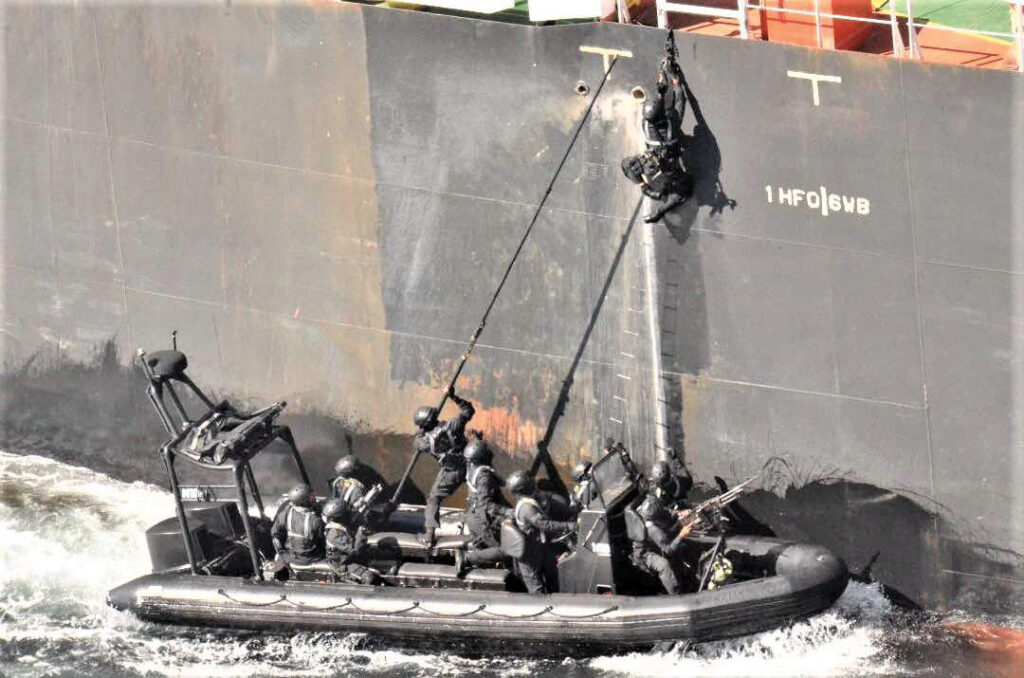 FORUM: What attracted you to special operations forces?

Alias: It was a long journey. I learned about the small wing of officers who were doing something special, more than just ordinary personnel. I was drawn to the challenges of special warfare, being tasked and pushed to the limit. I joined special forces in 1986. I completed the diving, parachuting and other special training within a year. I love to do the diving, parachuting, activities that ordinary officers cannot do. That is the challenge. After serving five years onboard ships, I rose to the level of squadron leader in Naval Special Forces.

FORUM: What are some of the highlights of your career before you assumed the role of first admiral?

Alias: I was chosen to be part of the naval special task force for the United Nations Operations in Somalia known as UNOSOM II in 1995 and be part of a special mission. Then, I was selected as military observer officer in 1998 in Angola, MONUA [U.N. Observer Mission in Angola], for one year. At that time, I was still a major or lieutenant naval commander. During my tour of duty, I had encountered at least four times close-quarter situations in a mine area and surrounding village that was under attack. I countered the attack on the civilians during the worst part of the rebellion when insurgents wanted to kill the children and women. I managed to save 20 lives, and for that I was awarded a prestigious medal for bravery and valor [Panglima Gagah Berani Medal] in 2000 by our king. 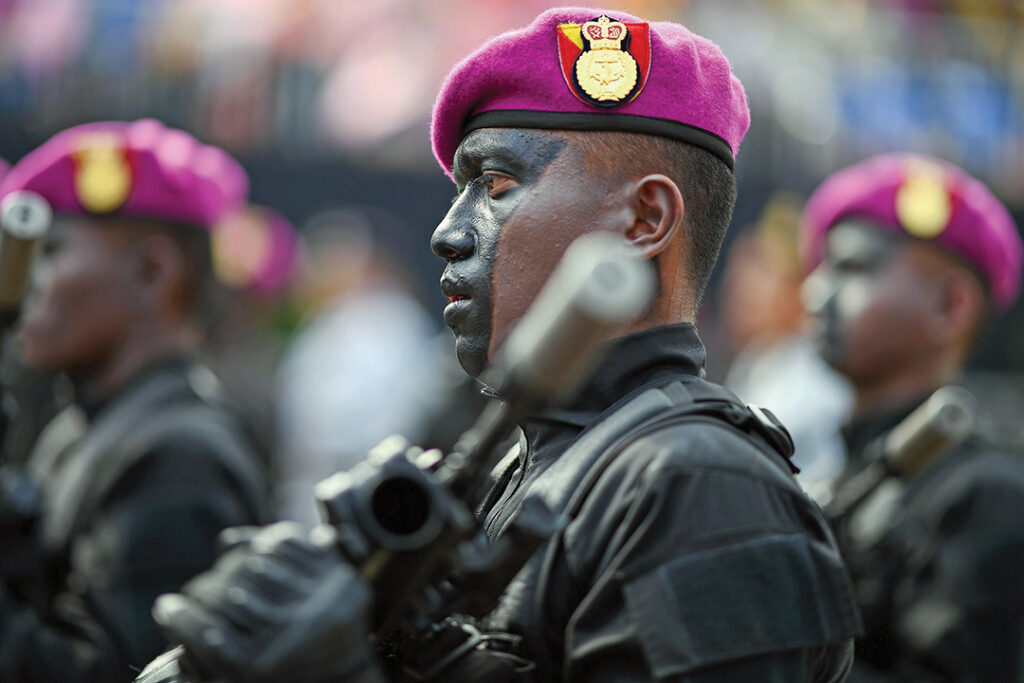 FORUM: And that was just the beginning of your career?

Alias: Special operations forces offer many opportunities, and I had the chance to continue my military career in Australia, the U.S. and Indonesia. I was sent abroad for my study. In 2006, for example, I attended the Naval War College in Rhode Island. I was appointed director of J3 [operations] joint force headquarters in Kuala Lumpur for about five years [from 2011 to 2015]. During that appointment, I was given a chance to be a subject matter expert in maritime counterterrorism and special warfare and involved actively and engaged with defense ministers in various countries. I also served as director of the multimission counterterrorism exercise in Langkawi and the Langkawi International Maritime and Aerospace Exhibition in 2015. I went to Indonesia a second time in 2016 to attend the National Resilience Institute of the Republic of Indonesia, known as Lenhannas, for my studies. After I returned from Indonesia, I was promoted in June 2017 to first admiral and assumed command as the Naval Special Operation Forces commander.

FORUM: What are the biggest challenges the Royal Malaysian Navy faces today?

Alias: One of the biggest challenges we face today is modernizing our fleet. We have a 15-to-5 armada transformation plan of the Royal Malaysian Navy. The plan will transform our Navy from an old, aging fleet to the new fleet for the emerging environments and the future. [The 15-to-5 program is a centerpiece plan that will reduce the current 15 classes of vessels to just five categories: littoral mission ships, multirole support ships, littoral combat ships, new generation patrol vessels and submarines.]

Due to change of government and economic challenges, there are many pressures on the Navy and the special forces. Special forces exist because of the fleet, and the right level of special forces must be determined. Knowing that Malaysia is a very hot country, bounded by the sea, we need a level platform to defend our borders. Our 15-to-5 plan is a very good plan. But if it is not executed properly, if new ships are not delivered according to the time plan, it will affect the cost of maintaining the old aging fleet. Sometimes, it can become more expensive to maintain older ships. The cost of an aging fleet can be higher because the cost of obsolete equipment becomes higher. It is also challenging, given the Malaysian defense agency makes the decisions.

The government insists that most ships be built by locals, so that is one of the challenges. It’s a good challenge because making our own submarines is better for our country. It’s a good move and good role model for other neighboring countries to follow our mission. For developing countries, it is very important for countries, especially in the southeast, to pursue a defense industry. It is important to be proud to produce our own defense equipment. That is among the challenges of what the Royal Malaysian Navy needs to do to be prepared defensively for 2030. New ships will be coming into our inventory and old ships will be decommissioned, but a delay in the delivery of ships promised by the manufacturer could present a challenge.

FORUM: What else does Royal Malaysian Navy need to do to be prepared for the coming decades?

Alias: New dimensions of security are constantly changing the playing field. I do believe social media and cyber will be game changers. Already, social media is playing important roles, and the rules will keep changing. It can benefit the good guy, but it can also benefit the bad guy. That’s already been proven as ISIS [Islamic State of Iraq and Syria] used it to recruit newcomers. The future generations must be educated and trained for the new world. Cyber warfare will be nothing like what we are seeing today. The military needs to be educated on new technologies. Cyber troopers can win elections. I do believe before we go to war, cyber troopers will do their part. Cyber troops will conduct this type of warfare combined with information warfare. Even today, sometimes people mix up information with intelligent information and make decisions without actually knowing the facts or reality of what is true.

FORUM: What are the top goals that you hope to achieve as first admiral?

Alias: I’ve done my best during my tenure of duty to promote PASKAL to the world. In 2018, I became advisor on a film that occurred with my approval and approval of the Malaysian chief of Navy. They came and met me and incorporated my story in Angola and filmed it as part of PASKAL The Movie. You can find it on Netflix. I followed its development. I’ve worked to promote PASKAL to the world. It is a super story not only for the Malaysia military but to outside countries. It’s one of action and shows how there are always many challenges ahead. Everything does not go as planned, but it works out.

FORUM: What do you think are the top security concerns for the Indo-Pacific in the coming years?

Alias: The South China Sea and China’s claim of the resources. The American concern is shifting, balancing Asia. There will be a clash of strategies between China and the U.S., two big powers, where other militaries will be in the middle. Border conflict will be among the top security concerns in the Indo-Pacific in the coming years. The Spratly Islands plus the South China Sea globally. They are of interest for us and regionally and the area of East Sabah with kidnappings for ransom, piracy and illegal immigrants and Saba. PASKAL’s Unit 1 will handle issues west of Malaysia. PASKAL Unit 2 is dealing with counterpiracy east of Sabah, working directly with my men.

FORUM: Do you believe multilateral approaches are important for security in the region? And why?

Alias: Yes, I do believe multilateral approaches are important because most of the problems are universal. It is important to develop a model for translation and interoperability. Countries that look for peace should be commited to developing joint solutions that are a win-win for countries involved. There should be mutual trust and understanding among the countries in order to give the best multilateral approach to security in the region.

FORUM: How do you see definitions of sovereignty evolving in the Indo-Pacific?

Alias: Each country has different definitions of sovereignty. It depends on each nation’s interests and priorities and how the government functions; each have conditions.

We need flexibility, trust and confidence. I agree with the approach to a free and open Indo-Pacific. Most countries are small countries and should work with countries that have a big capability.

There needs to be a means to work together to do something in order to curb all these activities that have a potential threat. As long as there are potential volatile situations such as that in North Korea or possible threats from extremists, nations need to work together to protect sovereignty.

FORUM: What is the value of conferences such as PASOC?

Alias: People who were invited were likely specially selected based on the topic [resiliency in sovereignty] and current involvement in their own countries, so hopefully I can contribute my ideas. I don’t come here as the policymaker; I just follow the orders. But here we have some freedom. We can express our ideas, and maybe our ideas are worthwhile to be explored and maybe used to start a good discussion. We try to be good Soldiers. This conference enables special forces from all over the world to meet together. We get to know each other. I met the commander of special forces from Thailand here for the first time. That is the beauty of PASOC. He is just next door, but we never met. There is opportunity for good discussion.