The members of the Association of Southeast Asian Nations (ASEAN) are developing naval strategies and modernizing their navies. This presents opportunities for South Korea and Australia to build special complementary relationships with ASEAN members as they seek to improve their defense-industrial capabilities.

ASEAN’s defense-industrial capabilities are expected to see a boost from centralized military procurement and expanded cooperation on developing affordable new naval weapons and systems as part of their naval modernization programs. The recent conspicuous expansion of the People’s Liberation Army Navy (PLAN) in the sensitive seas of the region — most obviously in the South China Sea — has prompted a general reform of national defense industries, with the emphasis on consolidating and centralizing fragmented defense industries, establishing self-sufficient domestic industrial capabilities, diversifying research and development investment, pursuing defense cooperation agreements and jointly developing or acquiring next-generation assets. Achieving these aims will require ASEAN members to coordinate their defense policies
and to collaborate with other regional states,
which presents significant challenges. 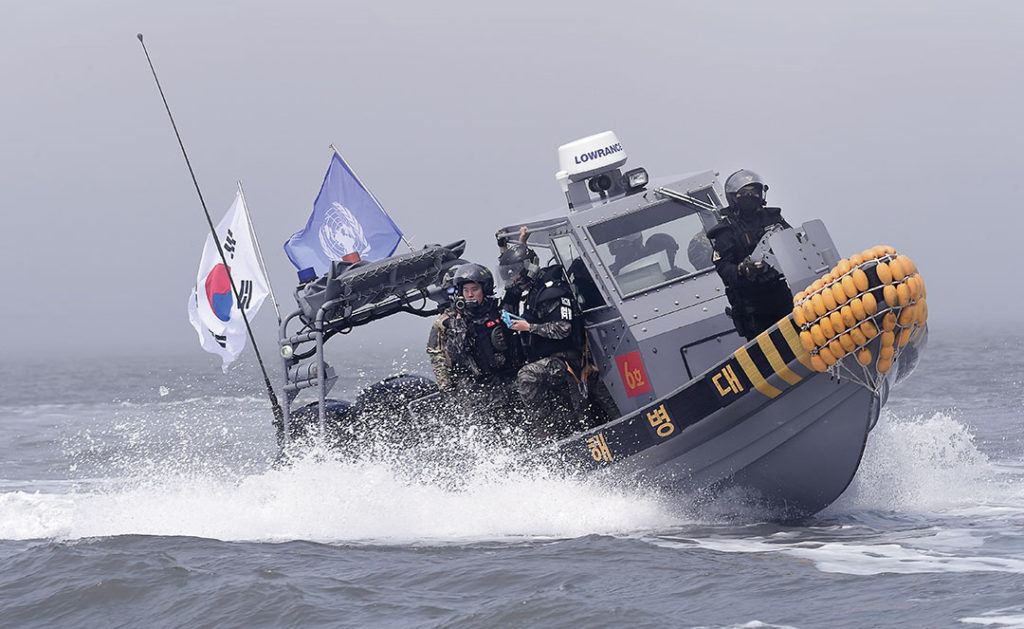 Republic of Korea Marines and Navy personnel conduct a crackdown against China’s illegal fishing in the Han River Estuary Neutral Zone off Ganghwa Island, Republic of Korea. The area has been a neutral zone since the end of the Korean War and is off-limits to all civilian vessels. GETTY IMAGES

ASEAN members disagree on defense procurement policy. Some Indo-Pacific partners and others want to look outside the region. Facing the urgent need to deal with a perceived maritime threat from China, the choice of partners to enhance Southeast Asia’s defense-industrial capabilities impacts national sovereignty as well as national security. Some ASEAN members would like to demonstrate their freedom and independence to cooperate with whichever partners they choose, but others fear that diversification could undermine their long-standing security partnerships with the United States and Europe. To integrate their defense-industrial programs with their national security priorities, ASEAN members must balance geopolitical factors against their need for affordable defense capabilities.

The Southeast Asian states thus face a choice: Is it more important to maintain historical relationships with Western defense suppliers, as part of a broader geopolitical alignment with the West, or should ASEAN members seek defense-industrial cooperation with the middle powers of the region? The latter option would allow for an emphasis on capability-based defense-industrial cooperation, and there would be significant economic advantages accruing from a common security and defense policy at the national and regional levels, with high-quality technology-based jobs and potential spin-offs from military investment. National sovereignty issues are also reflected in a desire to pursue a distinctive “Asian way,” with some aspiring to an Asian echo of Europe’s “ever closer union.” Most agree on the need to deter the threat from China, but ASEAN members remain split on which defense partners would best achieve this aim.

If ASEAN members are ready to change their mindset by shifting their defense-industrial cooperation from the United States and Europe to the middle powers of the region, then the best available partners for affordable naval modernization are South Korea and Australia. Both countries have sophisticated research and development capabilities, strong and supportive foreign/naval policies and are capable of large-scale naval production programs. Collaboration with South Korea and Australia offers many advantages: Rich cultural interactions with ASEAN members including appreciation for “Asian values,” timely replacement of older naval assets, competitive pricing, reliable and transparent naval acquisition processes and the prospect of future defense-industrial development and ensuing spin-offs from naval modernization.

The Republic of Korea Navy (ROKN) and Royal Australian Navy (RAN) have long been recognized as agile and effective naval forces, with considerable experience of maritime security cooperation with other partners, including the U.S. Navy and the Japanese Maritime Self-Defense Force. Their multinational naval cooperation has been demonstrated in maritime security exercises and in responding to regional maritime emergencies requiring search and rescue, humanitarian assistance, and disaster relief operations, often collaborating with the PLAN. They are now seeking to further develop their roles as established strategic middle powers in the Indo-Pacific region. They are widely admired for their cooperative strategic approach and have made great efforts to remain on friendly terms with both the United States and China. In this, South Korea and Australia are role models for many other countries in the region, which are hoping to avoid having to choose between the great powers. 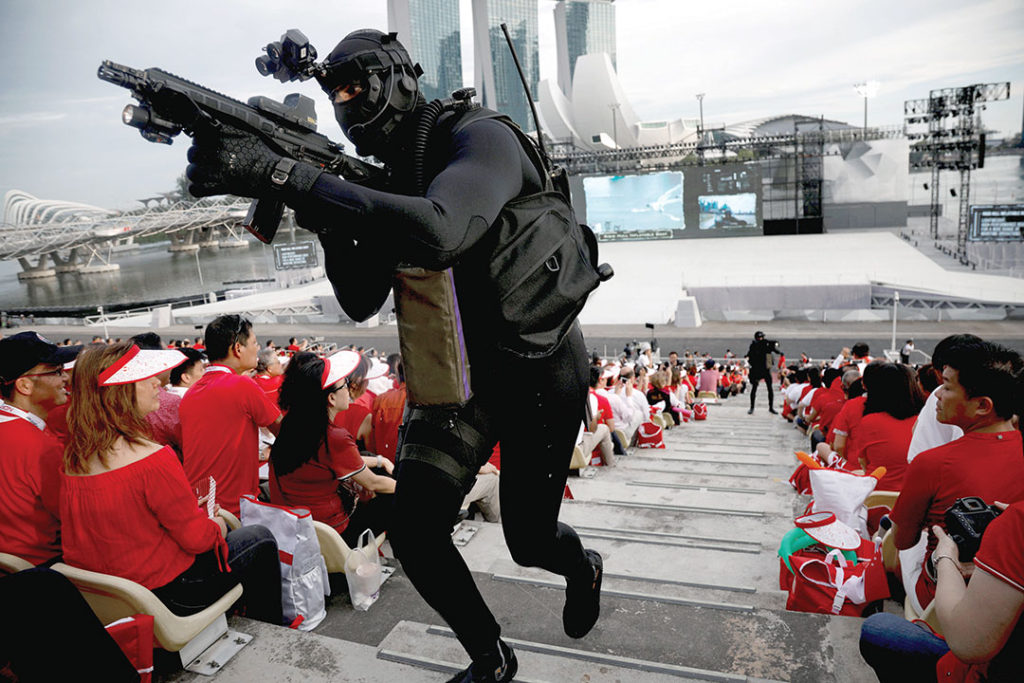 A Singapore Navy diver storms into the gallery during a military display at Singapore’s 52nd National Day celebration at Marina Bay. REUTERS

It is natural for the ROKN and the RAN to sustain close interoperable partnerships with the Southeast Asian navies of Indonesia, Malaysia, Singapore and the Philippines. Some of these countries participated in the United Nations forces that fought in the Korean War against North Korea and China. ASEAN members have already benefited from coastal patrol vessels supplied by the ROKN and the RAN to enhance capabilities to resist Chinese maritime assertiveness in the South China Sea. There are also broader collective advantages accruing from developing a complementary relationship between ASEAN members and the ROKN and the RAN. Naval modernization is a useful stepping stone toward realizing a much wider range of shared interests.

South Korea and Australia have an opportunity to build a regional system of defense-industrial cooperation that can last for decades, developing skilled workforces, advanced manufacturing bases and military technological capabilities. All these factors will facilitate entry into the global supply chain of the defense industry, and the ROKN and the RAN will be simultaneously working with ASEAN for the common security of the region. Indeed, bilateral defense- and naval-industrial cooperation is already expanding. For example, Daewoo Shipbuilding and Marine Engineering and Hanjin Heavy Industries are working with Indonesian domestic shipyards to build landing helicopter docks and submarines.

Although South Korea and Australia can provide naval and coast guard assets that are cheaper and more specific to ASEAN’s requirements, this is unlikely to be a game-changer in the maritime disputes between China and ASEAN, nor will it provide much impetus for a transformation of the regional maritime security environment. 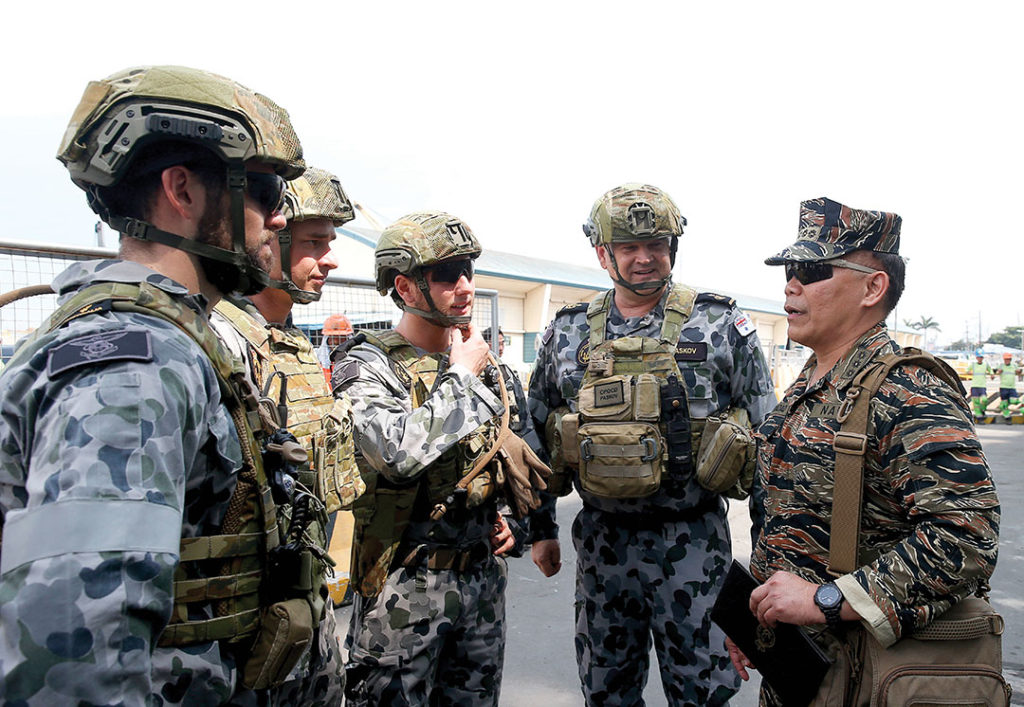 China continues to destabilize the maritime good order of the region, and the best option for improving maritime security is surely to establish broader networks of maritime cooperation among the middle powers of the region and between these and the weaker powers. Concrete suggestions to bring South Korea and Australia closer include:

Of course, South Korea and Australia should be simultaneously seeking to deepen their relationship with ASEAN.