A Symbol of freedom

U.S. Army Japan’s commander shares how his family’s rescue from Saigon fuels his desire to serve 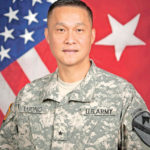 The events and images of April 30, 1975, remain fresh in Maj. Gen. Viet Xuan Luong’s mind. History books denote the date as the fall of Saigon, the day Communist North Vietnamese and Viet Cong captured the South Vietnamese capital, forcing South Vietnam to surrender and bringing an end to the Vietnam War.

For Luong, commander of U.S. Army Japan, it will forever be known as the day his life and the lives of his family changed forever. It was on that date that a 9-year-old Luong and his family found themselves at Saigon’s Tan Son Nhut airport in what appeared to be a dead-end situation. By the time American friends of Luong’s father, a Vietnamese Marine infantry officer, had helped secure paperwork for his family to leave, the airport had shut down.

“We thought we were doomed,” Luong recalled in December 2018 during an interview with History Channel Japan and FORUM at Yama Sakura, an annual bilateral exercise between Japan and the United States. “We were getting bombarded not only with airstrikes and aircraft bombing but also artillery and mortar fires as well. We thought for sure we were doomed.”

Unbeknown to the Luong family, Operation Frequent Wind was underway. The U.S.-led operation is the largest helicopter evacuation in history. In less than 24 hours, 81 helicopters carried more than 1,000 Americans and almost 6,000 Vietnamese to the safety of aircraft carriers offshore, according to History.com.

The Luong family was among those transported to the USS Hancock.

Luong remembers “very clearly” disembarking on the aircraft carrier. Most people thought they had been taken to some island off the coast of Vietnam because the ship was so big, he said.

“I tugged at my dad’s shirt, and I said, ‘Where are we at?’” Luong recalled, trying to hold back tears as they began to fall down his cheek. “And he said, ‘Well, you’re on the USS Hancock, a carrier from the 7th Fleet.’

“And as a kid, I just didn’t know what that meant. I asked my dad, ‘What does that mean?’” Luong’s father looked at his son and replied: “That means that nothing in the world can harm you now.”

“It may seem a little far-fetched, but I knew based on my experience back then that I was going to repay the debt to our nation, and I knew I was going to be in the military to be able to meet that debt,” Luong said. “I love what I’m doing. I continue to serve every day and do the best I can, and I do recognize that I sort of am a symbol of who we are as a nation in terms of the price of freedom, in terms of the duty concept, in terms of having to step up to do what we do.”

He assumed command of U.S. Army Japan (USARJ) in August 2018, after having served as deputy commanding general for operations at Eighth Army in South Korea. As USARJ commander, he is responsible for 2,500 Soldiers, civilians and family members throughout 16 installations in mainland Japan and Okinawa.

Luong commended the Japan Ground Self-Defense Force (JGSDF) for its professionalism and standout Soldiers and equipment. Exercises like Yama Sakura underscore the strength of the close, long-standing relationship the United States has with Japan and the JGSDF.

“We are resolutely committed to the defense of Japan,” Luong said. “Not only are we bound by our treaty, but by our presence here for over 70 years. We have an outstanding relationship military to military, but more importantly, our nations have a great relationship that has gone on for many years.”

Luong acknowledged that Japan’s latest National Defense Program Guidelines will allow the JGSDF to be more responsive, more lethal in terms of weapons purchases and retool how they organize.

“It’s all fairly brand new to the Japanese forces, and it’s only going to get better,” Luong said.

Luong drew comparisons between the U.S. and JGSDF. For the U.S., he said, high priority is placed on the quality of people and the way forces operate — with trust and allowing junior leaders to make decisions.

“The Japanese in a lot of ways are similar,” he said. “If they’re not there, they’re getting there, and it’s really a joy to work with them.”

Luong wants Japan to know that U.S. troops are committed to serve alongside them and defend the concepts of a free and open Indo-Pacific.