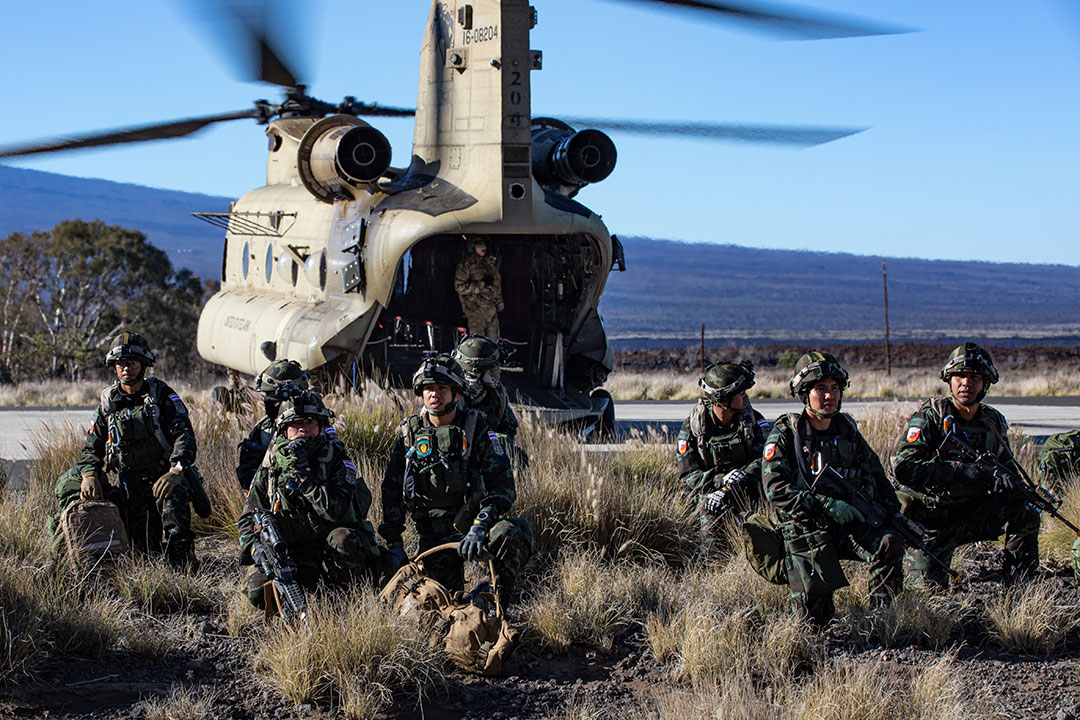 Simulating battlefield conditions helps ensure readiness of multinational forces preparing for a crisis or conflict. That was the purpose of Joint Pacific Multinational Readiness Center (JPMRC) Rotation 23-01 in Hawaii, featuring more than 6,350 military personnel from Australia, Indonesia, the Philippines, Thailand and the United States.

Observers from a half-dozen other Indo-Pacific nations — Bangladesh, Brunei, Malaysia, Mongolia, New Zealand and Singapore — were on hand for the large-scale exercises from October 20 through November 10, 2022. A Thai prince serving in the Royal Thai Air Force was among them. (Pictured: Royal Thai Armed Forces personnel participate in Joint Pacific Multinational Readiness Center 23-01 at Pohakuloa Training Area, Hawaii, in late October 2022.)

The aim was to provide all-domain training challenges in an Indo-Pacific environment with features such as jungles, hills and open water while improving readiness and interoperability, the U.S. Army reported. Partners must understand how each other operates and have equipment for effective communication, exercise leaders said.

The U.S. Army 25th Infantry Division, based in Hawaii, hosted the exercise on the islands of Oahu and Hawaii, with participation by the U.S. Air Force, Marines Corps and Navy.

“Over the next three weeks, we will sweat together, bust through gulches together, learn together, fight the enemy together and win together,” Col. Graham White, commander of the 2nd Infantry Brigade Combat Team, 25th Infantry Division, said at the event’s launch.

The multilateral approach to military training reflects a shared vision to uphold the rules-based order that has served the Indo-Pacific for decades, with allies and partners working together to foster stability and prosperity, according to a U.S. Defense Department news release.

“Our mission … is to provide a world-class training exercise — a crucible experience — in terrain and operational conditions that replicate the conditions that we expect in combat in this theater,” said Brig. Gen. Jeffrey VanAntwerp, deputy commanding general-operations, 25th Infantry Division. “We’re going to do that by stressing every warfighting function.”

In addition to boosting interoperability, the JPMRC strengthens defense relationships, increases U.S. readiness and reinforces the unified regional land-power network that supports a Free and Open Indo-Pacific, officials said. There are three campuses — in Hawaii, Alaska and a deployable location in the region — with exercises staged at each annually, allowing forces to simulate theater-level operations and planning in jungle, arctic and archipelago environments. The first rotation was in Hawaii in October 2021.

“There’s a reason we have a training center in Europe, and we don’t bring tactical forces back from Europe to the continental United States to train,” Gen. Charles Flynn, commander of U.S. Army Pacific said, according to the Army Times website. Until recently, “we just never created a combat training center out here in the Pacific.”