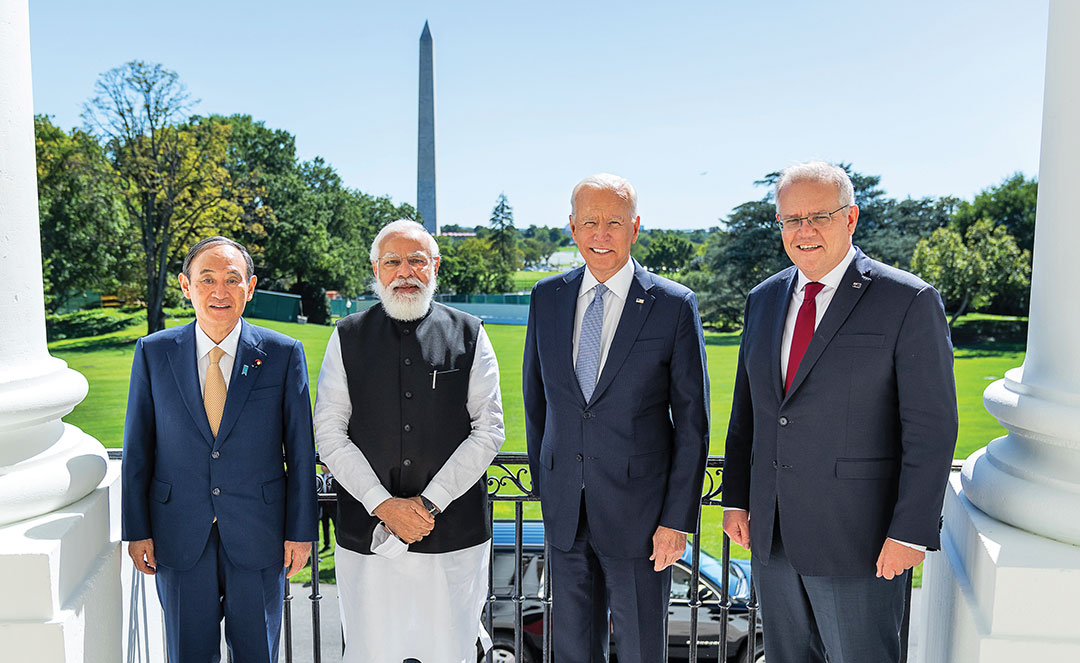 Understanding the New Era of Indo-Pacific Alliances and Partnerships

The past year saw much media coverage of newer strategic partnerships in the Indo-Pacific. The Quadrilateral Security Dialogue, or Quad — whose members are Australia, India, Japan and the United States — continued to figure prominently, with September 2021 witnessing further maturation of this forum with the first Quad Leaders’ Summit in Washington, D.C. Underscoring the innovative tilt in security arrangements was the announcement of the Australia, United Kingdom and U.S. security partnership, known as AUKUS, earlier that same month. Analysts described AUKUS, which will deepen defense science, technology and industry integration among the partners, as a harbinger of many similar trilateral or mini-lateral pacts to come. Commentators quickly seized on this, highlighting the uptick in security arrangements as the dawn of a new era of alliances and partnerships in the Indo-Pacific. Whether this will be the case remains to be seen. For now, it may be instructive to delve deeper into understanding what might be driving this wave of reconfigurations in strategic relationships by the U.S. and like-minded partners in the region.

There already exists a rich tapestry of alliances, partnerships and relationships in the Indo-Pacific developed by the U.S. and partners since the end of World War II. This overarching architecture has enabled the navigation of successive geopolitical and security challenges and the establishment of an international rules-based order providing decades of stability, security and prosperity for much of the Indo-Pacific. The U.S. alliances with Australia, Japan, the Philippines, South Korea and Thailand are widely seen as cornerstones of this architecture. But these alliances are nested in a wider, dense network of bilateral security relations that enmesh nearly every nation in the Indo-Pacific. Underpinned by robust civil and military diplomacy and extensive security assistance and cooperation programs, such outreach has expanded over the years to include key regional multilateral organizations and mechanisms. The Association of Southeast Asian Nations (ASEAN) and the ASEAN Defense Ministers Meeting-Plus are noteworthy examples, as are engagements with the Pacific Islands Forum and a range of other Indo-Pacific political-security arrangements, often with a specialized service or functional focus.

If these arrangements have served well in the past, why the impulse toward reconfigurations? Quite simply because times have changed. The post-WWII security architecture largely developed in a different context, addressing different conditions and circumstances. The security solutions the architecture was designed to facilitate related initially to the challenges of the Cold War and confrontation with the Soviet Union. The eventual disintegration of the Soviet Union and end of the Cold War saw a short interval of “drift” in the U.S., which was soon replaced by a focus on the war on terror and security capacity and institution building to address extremist challenges to state stability. Reflecting this trajectory, much of the thinking around security architecture engagement and development until recently has drawn on some amalgam of themes associated with countering extremism and terrorism, security or defense capacity development and institutional enhancement, or more ambitious nation building.

The current context is a dramatic departure from this past, defined by the rapid emergence of the People’s Republic of China (PRC) as a pacing competitor to the U.S. and a force undermining the international rules-based system and sovereignty of partners in the Indo-Pacific. Although on the surface the challenges posed by the PRC might invite comparison with the Soviet era, this can be deceptive. The PRC represents a different entity than the Soviet Union, making the task of addressing it much more complex. Far from being independent, it has immersed itself in the international political and economic system and turned this to its advantage. Leveraging all elements of national power in state-led programs such as the One Belt, One Road infrastructure scheme, the PRC has subverted, cajoled and coerced nations of lesser means. Meanwhile, through a panoply of insidious gray-zone tactics just short of the threshold of war, it has strengthened its hand without triggering conventional security responses capable of inflicting punishing costs. These challenges are neither comparable to Cold War confrontation nor soluble in the same ways that allies countered terrorism and built partner nation security capacities. How we have configured alliances and partnerships needs to be revisited while new configurations are explored to better meet current challenges.

The relentless march of technology makes this reconfiguration more crucial. Tech-enabled domains such as cyber and space are now pivotal for national security and strategic competition. When fused with advanced capabilities in artificial intelligence, quantum computing and 5G or 6G telecommunications, the prospects for highly sophisticated multidomain operations are increasingly feasible. Yet, such technologies and capabilities were hardly imaginable when the foundations of much of the Indo-Pacific alliance and partnership architecture were evolving during the second half of the 20th century. It is imperative to reassess the adequacy of our security partnerships and arrangements to not only foster such readily accessible capabilities for the collective security and defense of like-minded partners but also to head off the threat they pose when developed and deployed by malign actors. Updating an inherited architecture may get us partway in this effort. Likely, newer partnership constructs will be needed that are unique to these technology fields and the requirements of all-domain operations.

Today, the Indo-Pacific faces an expanded threat spectrum that challenges the relevance and effectiveness of our alliances and partnerships. Involving diverse elements of state power — and with the private sector and even nongovernmental and criminal groups dragooned into service — the PRC’s gray-zone tactics and multidimensional threats typically bring to bear much more than military force on any matter of consequence. Increasingly, it is rare that anything is purely a security or defense issue, especially when political, diplomatic, legal, economic, financial, technological and information considerations are added to the mix to convolute and confound. Yet, we remain wedded to alliances and partnerships that historically rest on pristine and narrowly conceived notions of security or defense. No matter how exquisite this partnership architecture might be, it risks paralysis in the face of ambiguous situations where no definitive “smoking gun” can be identified to trigger mutual defense or security obligations. How many incursions by maritime militias amount to an act of war? How many state officials or political representatives need to be corrupted and influenced before a national security threat is recognized, invoking treaty provisions? To counter the prospect of such paralysis, it is timely to reframe the nature and scope of such partnerships to reflect the subtleties of the strategic competition being waged, where things are often won or lost without a shot being fired. Updating the old and finding new, more effective partner configurations is essential.

Issues of strategic competition aside, the 21st century has already shown a future likely to be characterized by threats of a severity, magnitude and complexity that outstrip the capacities of existing multilateral cooperative mechanisms. The enduring COVID-19 pandemic is a case in point, but so, too, is the challenge of climate change. Each has greatly exacerbated insecurities in the Indo-Pacific and will continue to do so for years to come. They both have also severely tested international cooperative mechanisms, prompting urgent efforts to develop options for dealing with priorities. COVID-19, for example, prompted arrangements of varying scale and scope to address issues such as personal protective equipment shortages, and vaccine research, development and distribution. Related to climate change, innovative partnerships continue to emerge to serve urgent priorities in humanitarian assistance and disaster relief. They will likely expand to strengthening resilience in partners and exploring scientific, technological and organizational solutions. Alongside mature alliances and partnerships, cooperative arrangements unique to these and other crises will likely develop, sometimes of an ad hoc nature with specific objectives and priorities and varying life spans.

Partnerships have always mattered. However, owing to the security solutions needed now — and in the future — some aspects of partnership development are likely to have more exacting requirements and expectations. As the example of AUKUS suggests, a qualitatively deeper level of commitment and integration is required to decisively address challenges with agility, speed and impact. By necessity, some future partnerships may be more selective and tailored, bringing together a narrower range of partners with closely aligned interests and complementarities. This may cause apprehension. Proponents of regional and subregional multilateralism, for example, may fear a dilution of commitment. Such alarm is misplaced. There will always be a place for inclusive and representative pan-regional or subregional arrangements, and the commitment to these is unlikely to diminish. That said, there must also be an increasing scope for smaller arrangements that allow groups of nations to move with speed and agility to solve urgent challenges or needs. Offering an additional dimension, such mini-laterals need not detract from or undermine the alliance and partnership architecture. In fact, they have the potential to strengthen the overall architecture to better fulfill the aspirations of regional peace, security and prosperity.

In a commentary on AUKUS for Defense News in December 2021, then-Australian Minister for Defence Industry Melissa Price singled out Australia’s rapidly deteriorating strategic environment as a major factor behind the pact. Most Indo-Pacific nations may share such pessimistic strategic assessments. Allies, partners and like-minded countries would be remiss if they did not take stock of their readiness to face this troubling context. A robust reassessment of the adequacy of alliance and partnership arrangements must be a high priority. Given the strategic competition, the question must be: “Is what we have now in our alliances and partnerships enough?” Likely, the answer will be: “We have to do more.”