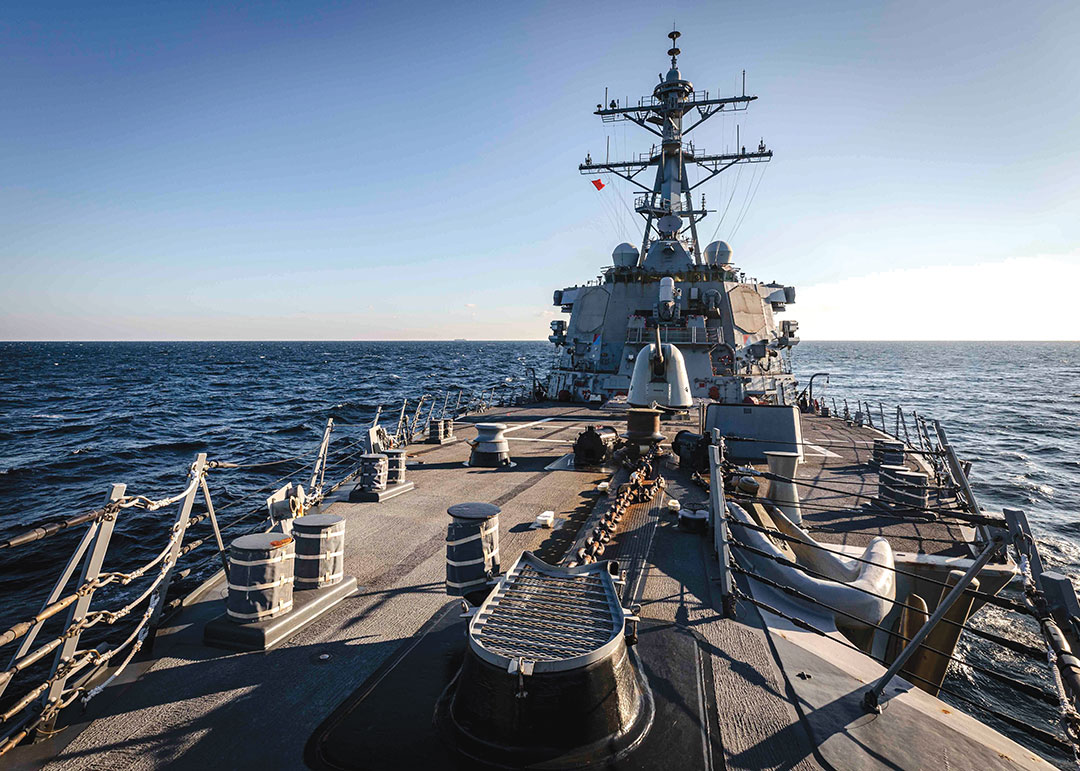 All nations benefit from a Free and Open Indo-Pacific region governed by the rules-based maritime order that sets out an acceptable legal framework for all uses of the world’s oceans. Despite the vital role this order plays in promoting peace and security and advancing economic prosperity in the region, the international order is under serious attack. States such as  the People’s Republic of China (PRC) and Russia seek to impose a new order — one based on “might makes right” — advancing maritime claims that are inconsistent with international law. The United States’ freedom of navigation (FON) program is one available tool to counter these attacks on the established international order, and it underscores the U.S. commitment to preserving a stable legal system for the world’s oceans for all nations.

The FON program was initiated in 1979 after then-U.S. President Jimmy Carter’s administration determined that written diplomatic protests were ineffective in reversing excessive maritime claims and that a more tangible demonstration of U.S. resolve was needed to influence nations to either avoid new unlawful assertions or renounce existing ones. The adoption of the United Nations Convention on the Law of the Sea (UNCLOS) in 1982 was touted as a comprehensive, widely accepted international framework governing uses of the oceans that carefully balanced coastal and maritime states’ interests.

Although the U.S. was instrumental in developing most of the convention, then-U.S. President Ronald Reagan declined to sign it because of untenable flaws in Part XI on deep seabed mining. Nonetheless, President Reagan indicated in his 1983 Ocean Policy Statement that the U.S. would recognize the rights of other states in waters off their coasts, as reflected in UNCLOS, so long as such coastal states recognize the rights and freedoms of the U.S. and other nations under international law.

President Reagan, however, also issued a warning to states that, despite being a party to UNCLOS, continued to assert maritime claims that were inconsistent with the convention. Reiterating the importance of the FON program, the Ocean Policy Statement indicated that the U.S. would not acquiesce in illegal acts by states designed to restrict the international community’s navigational rights and freedoms, and that the U.S. would “exercise and assert its rights, freedoms, and uses of the sea on a worldwide basis” consistent with the balance of interests reflected in UNCLOS.

The FON program operates along three tracks: diplomatic communications by the U.S. State Department, bilateral consultations with other governments, and operational assertions by U.S. naval ships and military aircraft. Since the program’s inception, the U.S. Navy and U.S. Air Force have conducted hundreds of operational assertions globally to demonstrate U.S. nonacquiescence in excessive maritime claims designed to restrict navigational rights and freedoms and other internationally lawful uses of the seas.

Contrary to allegations that the FON program is provocative and could result in unintended consequences, freedom of navigation operations (FONOPS), in essence, are a nonprovocative exercise of rights, freedoms and lawful uses of the sea and airspace guaranteed to all nations under international law, including UNCLOS. FONOPS are deliberately planned, legally reviewed, properly approved by higher authority, and safely and professionally conducted in a nonescalatory manner. The program is applied globally and is not based on political events or the identity of the nation advancing an illegal claim. In 2020, for example, the U.S. challenged the excessive claims of 19 nations, including adversaries (e.g., Iran and the PRC), allies and friends alike. Routine application of the program to all nations maintains its legitimacy and nonprovocative intent and demonstrates U.S. resolve to preserve access to the world’s oceans for ships and aircraft of all nations.

The PRC and Russia also routinely contend that they have “expelled” U.S. warships conducting FONOPS from their claimed territorial waters. Such disingenuous assertions are cheap propaganda designed to inflame nationalist sentiment at home and misrepresent lawful U.S. maritime operations. In the 40-plus years of the FON program, no U.S. warship has been expelled from a coastal state’s waters. If challenged by coastal state authorities, U.S. warships reply that they are simply conducting a lawful operation in accordance with international law and then continue on their designated course until the mission is complete. In 1988, two Soviet warships intentionally rammed the USS Caron and USS Yorktown while they were conducting a FONOP off the Crimean Peninsula. Despite the collision and repeated threats from numerous Soviet vessels, the U.S. warships continued their track until they exited the Soviet-claimed territorial sea after completing a 75-minute transit.

The 1988 Black Sea incident is a vivid example of how the FON program can be used to preserve navigational rights and freedoms. It reinvigorated bilateral discussions between the two superpowers regarding the legal aspects of innocent passage that had been ongoing since 1986. The discussions led to the signing of the 1989 Uniform Interpretation of Rules of International Law Governing Innocent Passage, known as the Jackson Hole Agreement, in which the Soviets agreed with the U.S. position that “all ships, including warships, regardless of cargo, armament or means of propulsion, enjoy the right of innocent passage through the territorial sea in accordance with international law, for which neither prior notification nor authorization is required.”

The U.S. Secretary of the Navy’s new Strategic Guidance, issued in October 2021, reiterates that the U.S. will expand its “global posture to ensure the presence of naval forces with the right mix of platforms, capability, and capacity to maintain freedom of the seas, support international law and norms, stand by our allies, and continue to fly, sail, and operate wherever international law allows.” A robust FON program is one pillar of that expanded global posture, which aims to counter the proliferation of excessive maritime claims that restrict access to the world’s oceans. Left unchallenged, these excessive maritime claims can infringe the rights, freedoms and lawful uses of the sea enjoyed by the U.S. and other nations. In short, the FON program underscores the U.S.’s willingness to fly, sail and operate wherever international law allows and exemplifies its unwavering commitment to a stable, rules-based legal system for the world’s oceans.

This is particularly true in the South China Sea where the PRC routinely flouts international law and engages in dangerous and provocative actions to advance its unlawful maritime claims and intimidate smaller states from lawfully exploiting their maritime resources. In 2016, an international tribunal ruled unanimously that there was no legal basis for the PRC to claim maritime rights in the South China Sea based on its infamous nine-dash line. The tribunal also determined that the PRC’s large-scale land reclamation and construction of artificial islands at the seven features it occupies in the Spratly Islands caused severe harm to the marine environment and violated the PRC’s obligation to preserve and protect fragile ecosystems. The ruling is legally binding, but Beijing has refused to comply with it. Since 2016, the U.S. has conducted more than 30 FONOPS challenging the PRC’s excessive maritime claims in the Spratly and Paracel islands.

The international community has an enduring obligation and responsibility to preserve the freedom of the seas, which is critical to global security and prosperity. The U.S., therefore, encourages nations to conduct their own freedom of navigation operations and to publicly oppose excessive maritime claims that impede navigational rights and freedoms. In as much as some countries continue to claim and assert restrictions on navigational rights and freedoms that exceed what is provided for under international law, the U.S. will continue to demonstrate its resolve to uphold the rules-based order that has proven essential to securing global security, stability and prosperity for all nations.