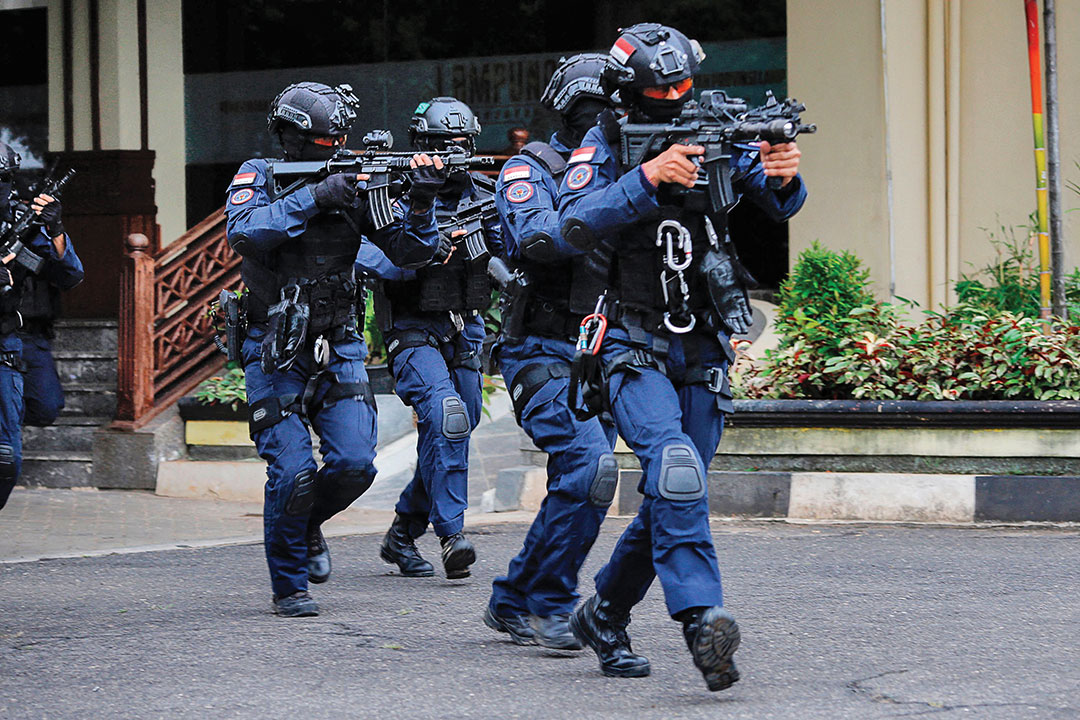 Terrorist threats in Southeast and South Asian countries declined in 2021, a Singapore think tank said in its annual threat assessment published in January 2022, noting that COVID-19 movement restrictions had “flattened the curve of terrorism.”

There were fewer terror-related incidents in Bangladesh, Indonesia, Malaysia and the Philippines as governments battled the pandemic, according to the “Counter Terrorist Trends and Analyses” report published by the S. Rajaratnam School of International Studies.

In Thailand in 2021, meanwhile, violent incidents connected to an insurgency in the far south were similar to those in 2020, researchers found.

“Ultimately, the 2021 survey underscored the continuing imperative for states to address the longer-term underlying grievances that fuel violent extremism,” the analyses said.

In Indonesia, Southeast Asia’s largest country, the number of attacks and plots by extremist Islamic militant groups dipped during the two years spanning 2020 and 2021 compared with before the outbreak of COVID-19, according to the report. Jamaah Ansharut Daulah’s (JAD’s) relatively stagnant activities in 2020-21 and the decline of East Indonesia Mujahideen’s (MIT’s) terror activities in 2021 “can be partly attributed to movement restrictions and higher costs associated with domestic travels due to the pandemic,” the report said.

In 2021, JAD was involved in at least nine incidents, including five using explosive materials. Those included two suicide bomb attacks and a suicide bomb plot, compared with 11 incidents the previous year.

Police were terrorists’ most common target in Indonesia, the analyses found. Others targeted by Indonesian extremists in 2021 were “civilians, including Christians, as well as both Indonesian and mainland Chinese,” the report said.

In early January 2022, Indonesian security forces announced they had killed Ahmad Gazali, a suspected MIT member, in the mountains of Central Sulawesi province, cutting MIT’s membership down to only three.

The analyses specifically linked the pandemic and the drop in terror activities in Malaysia in 2021. “The pandemic-driven movement restrictions that hampered inter-state and international movements also ‘flattened the curve of terrorism’ in Malaysia.”

“The government-imposed lockdowns have forced people to spend more time online, raising the likelihood of vulnerable individuals being exposed to radical ideologies in the cyber domain. Around the region, groups such as IS [Islamic State] have increased their recruitment and radicalization efforts through social media during the pandemic,” it said.

Elsewhere, the Armed Forces of the Philippines drew praise for capturing terror bases in the southern region of Mindanao. Nationwide, the number of successful terrorist incidents dropped from 134 in 2019 to 59 in 2020 and 17 in 2021, the analysts said, defining a successful incident as an attack that injured or killed others.

The analyses noted that government-imposed COVID-19 lockdowns affected terror operations. “Given they significantly limited the movements of the general population, as well as those of terrorists, this has rendered terrorist logistics vulnerable to being detected more readily,” it said.

In Bangladesh in 2021, “there were two failed attacks compared to four successful ones in 2020,” the report said, adding that authorities arrested about 130 terrorist suspects nationwide.

It also said that Neo-JMB sought to train its members how to produce improvised explosive devices, as well as “chloroform bombs to target buses, classrooms and public places in its bid to kill silently.”

In Thailand’s insurgency-hit southern border region, 423 violent incidents were recorded, with 104 people killed and 169 injured, through November 2021, according to the report. The scale was similar to 2020 when 335 violent incidents occurred, killing 116 and injuring 161.

In the Muslim-majority Deep South, as the region is known, more than 7,000 people have been killed since separatist groups resumed an insurgency against the Buddhist majority 18 years ago.

The Barisan Revolusi Nasional (BRN), the Deep South’s largest separatist group, scaled down its militant operations on humanitarian grounds in April 2020 because of the pandemic. The analyses said this led to a “significant decline in violence.”

“In 2021, the BRN maintained low-level operations, so as not to aggravate the already perilous situation for southern residents,” it said.

After avoiding peace talks with government officials, in early 2020, BRN rejoined the efforts brokered by Malaysia. A government source said the two sides met virtually in 2021 and the BRN submitted a cease-fire proposal in May 2021, according to the analyses.