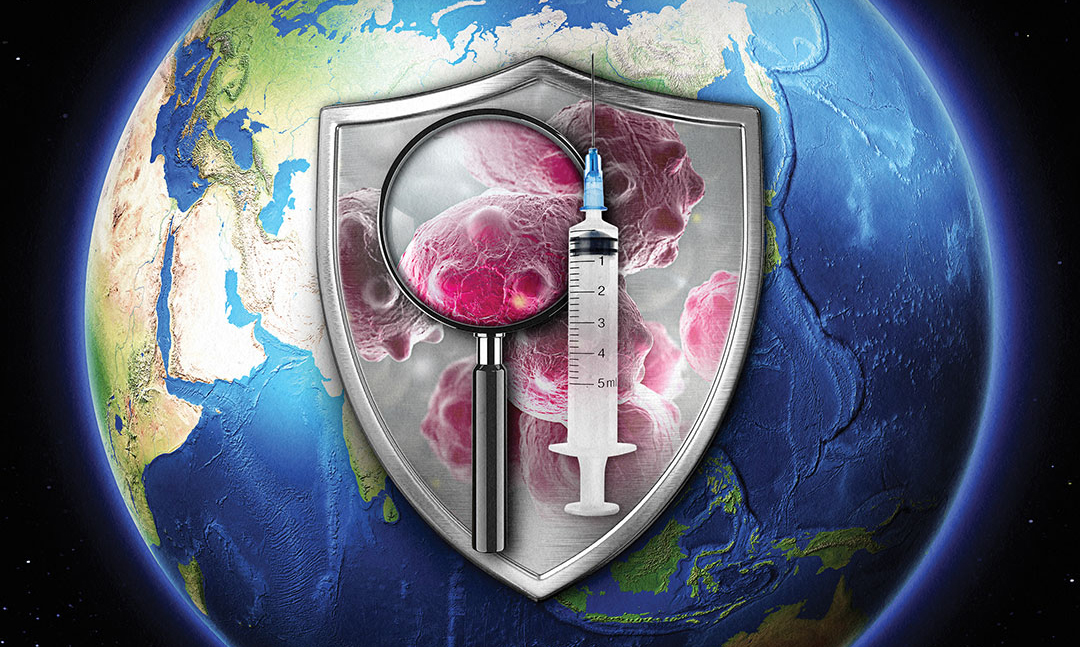 Intelligence gathering that includes disease surveillance is an important early warning tool that strengthens decision-making capability and national security. United States military forces, medical assets and intelligence agencies — and those of its allies — are crucial for early detection and response in the fight against emergent disease outbreaks. These factors underscore the need to establish a biodefense fusion center.

U.S. intelligence agencies, laboratories, civilian institutions, assets of U.S. allies and partner nations, social media and data mining can be interwoven with technology and leveraged for mutual defense. The basic pillars of an early warning system are already in place and must be better funded and coordinated going forward.

Alliances, partnerships and interconnectivity need to be improved and coordinated among governments, independent social media data miners and other assets that can support this mission. These efforts need increased funding and intensive collaboration to weave their information into an international biodefense shield with U.S. security partners.

Zoonotic transmission from animals to humans, lab accidents or biowarfare can trigger an outbreak, and disease can quickly spread globally as experienced with the COVID-19 pandemic. COVID-19 has also shown crucial U.S. national security vulnerabilities and shortfalls in the response capability of the U.S. and its allies and partners. Adversaries have likely taken note.

As the U.S. Department of Defense’s (DOD’s) lead agency for producing medical intelligence, the NCMI is responsible for coordinating and preparing integrated, all-source intelligence on foreign health threats and other medical issues to protect U.S. interests worldwide for the DOD and other government and international organizations.

Given that diseases are transboundary in nature, it is essential that the U.S. can detect them before they reach U.S. soil. The problem is that many closed nations, such as China, Iran, North Korea and Russia, are not transparent about medical issues that affect their citizens and could affect other nations, such as a disease outbreak. Information about transmissibility, genome data and virulence statistics is crucial for combating disease outbreaks but characteristically difficult to obtain.

The value of these tools was evident in November 2019 when the U.S. intelligence community and the NCMI began to warn of a global epidemic, saying that the COVID-19 outbreak in China could develop into a cataclysmic event. Policymakers, decision-makers and the U.S. National Security Council were repeatedly briefed on the issue. By early January 2020, the COVID-19 outbreak had been mentioned in the U.S. president’s daily brief of national security matters. In this pandemic, government intelligence agencies and military medical intelligence gatherers were well ahead of the curve in raising the alarm.

Synthetic bioweapons (SBWs) are weaponized biological vectors modified through synthetic biology for novel effects, mechanisms or processes. For example, CRISPR-Cas9, an acronym for clustered regularly interspaced short palindromic repeats (CRISPR) and CRISPR-Associated Protein 9,
is a genetic editing technique that has cured diseases in humans, but it can also be used to create SBWs. In addition, SBWs could enable a new capability — weapons that render threat detection difficult, have no conventional equivalent and are harder to counter.

Doctrinally, China has recognized the critical role that unconventional weapons might play, and some Chinese have already rejected moral limits on SBWs. China must be prepared to synchronize all government capabilities at all levels of competition, with all tools considered legitimate, according to the 1999 book “Unrestricted Warfare” by Qiao Liang and Wang Xiangsui, colonels in the People’s Liberation Army
Air Force.

The U.S. military, in conjunction with its intelligence resources, a revitalized U.S. Centers for Disease Control and Prevention and global institutions, can provide the building blocks for an early warning and rapid response system woven into a national biodefense fusion center. The DOD has forward-deployed bases, forces, labs, hospitals, intelligence assets and surveillance resources, all backed by an agency that has demonstrated success in early warning, testing and response measures. In 1998, five organizations within the DOD collaborated to create the Defense Threat Reduction Agency (DTRA) to better synchronize plans and actions for nuclear deterrence, weapons of mass destruction and biothreats. The DTRA quickly provided subject matter expertise, portable lab testing facilities, vaccines and treatments for an Ebola outbreak in West Africa.

These overseas military facilities form the basis for an effective international infectious disease surveillance effort, especially when collaborating with civilian health agencies such as the WHO, partner nations and nongovernmental disease outbreak search platforms.

The Epidemic Intelligence from Open Sources (EIOS) program is a collaboration among public health stakeholders globally for early detection, verification, assessment and communication of public health threats by using publicly available information. EIOS is based on the early alerting and reporting project of the Global Health Security Initiative and the hazard detection and risk assessment system (HDRAS), as well as work with global initiatives such as the Program for Monitoring Emerging Diseases (ProMED), the Global Public Health Intelligence Network (GPHIN), HealthMap and the Europe Media Monitor.

The GPHIN is a web-based program established in the late 1990s that uses a network of multinational and multilingual professionals to rapidly detect, identify, assess and mitigate threats to human health. It is a crucial part of the WHO-developed HDRAS, which uses web-based epidemic intelligence tools and collects information from HealthMap and ProMED, among others. HealthMap uses informal online sources for disease outbreak monitoring and real-time surveillance of emerging public health threats, including the mobile app Outbreaks Near Me. The International Society for Infectious Diseases launched ProMED in 1994 as an internet service to identify unusual health events related to emerging and reemerging infectious diseases and toxins affecting humans, animals and plants.

Open-source intelligence tools used for health surveillance automatically collect and collate data, thereby evaluating much larger quantities of information with algorithms and producing relevant reports. GPHIN, ProMED and HealthMap have provided alerts on some of the most serious disease outbreaks in the past two decades. For example, despite its earlier experiences with severe acute respiratory syndrome (SARS), China did not report a November 2003 human H5N1 influenza case until 2006. Yet, by evaluating content from Chinese media and low-level online chatter, ProMED provided the first English-language alert of SARS and prompted confirmation by the Chinese government. Similarly, indicators of a recent Ebola outbreak were detected by HealthMap before any announcements by officials or the WHO. And EIOS picked up the first report of a cluster-type pneumonia outbreak in Wuhan, China, on December 31, 2019 — an outbreak that would become the COVID-19 pandemic.

The U.S. National Security Strategy (NSS) provides a framework for protecting the nation and ensuring its freedom, security and prosperity in a rapidly changing, complex world. Consistently and innovatively translating the NSS blueprint into action remains a core function of government.

It is time for the U.S. to spearhead the development of a biodefense fusion center. This initiative is urgently required to meet growing transboundary infectious disease threats to international security.

National biodefense must not be exclusively reactive. Research needs to be undertaken by organizations such as the DOD’s Defense Advanced Research Projects Agency’s (DARPA’s) biotechnology office. DARPA will need the resources — more funding and personnel — to drive the development of advanced biosensors, diagnostics, countermeasures and other defenses to keep pace with changes in diseases. This has become even more urgent now that designer weapons can be created. Another asset is the DTRA, whose mission “enables DOD and the U.S. government to prepare for and combat weapons of mass destruction and improvised threats,” including those of biological origin.

A comprehensive counterpandemic and counter-SBWs plan would look for and respond to clear and present biological dangers while advancing the operating country’s knowledge about disease potential and emerging threats. The U.S. government must develop flexible, rapid and effective response plans that include well-maintained stockpiles of specialized sensors, protective equipment and medications.

The U.S. could advance disease surveillance, reporting and early response with a biodefense fusion center by leveraging existing security relationships with regional allies and partners in a coordinated approach to improve domain awareness and communication. Intelligence asset reporting, health and lab information, and social media and big data searches from an array of sources must be collated, validated and rapidly disseminated to provide biodefense.

Partner nations could help build a disease early warning system, as demonstrated by Indo-Pacific countries that have a major stake in disease surveillance and early warning. These nations are already significantly aligned with the U.S. through organizations such as the Daniel K. Inouye Asia-Pacific Center for Security Studies.

Health surveillance and security can be quickly interconnected by leveraging the member states of the Quadrilateral Security Dialogue, or Quad — Australia, India, Japan and the U.S. — and the Five Eyes intelligence-sharing alliance of Australia, Canada, New Zealand, the United Kingdom and the U.S. This can form the basic pillars of a biodefense shield as information is directed to the biodefense fusion center. In much the same way, national and international maritime fusion centers are being proposed to reduce transnational threats at sea.

Potential partners in a more robust, regional biodefense fusion center and biodefense shield could include Japan, South Korea, Taiwan and Vietnam. Other nations such as India, Israel and NATO and European Union member states could be included to form a global and comprehensive disease surveillance enterprise. Current events have demonstrated that such alliances are both proactive and successful at mitigating pandemic problems.

The next iteration of U.S. strategy must focus on key collaborative initiatives that collate and fuse data from intelligence sources, health assets and social media web crawlers to tease out new or evolving threats to health and security. Drawing on the strength and strategic alignment of existing relationships will only be effective with rapid intelligence sharing across platforms. Therefore, the U.S. approach needs to be innovative and ensure that critical instruments of alliance power are leveraged quickly to facilitate appropriate responses to health threats with adequate scope and focus.

Global health intelligence in the 21st century is an increasingly important part of national security, strengthens national defense and requires a greater share of the resources committed to conventional warfare. Through soft power and health security functions, it also protects national security directly and indirectly.

Even in extremely challenging operational theaters, the use of medical diplomacy initiatives through military global health engagement has been a highly effective peacekeeping tool. Medical and disease threat intelligence is, thus, vitally important to the safety and security of a nation and its people. Military forces, health departments, labs and civilian intelligence agencies need funding and staffing beyond the levels seen during the COVID-19 pandemic.

Infectious diseases are evolving and disrupting nations at a faster pace. This is exacerbated by demographic, political and climate change pressures that push populations into wilderness or other areas once considered uninhabitable. Thus, potential exposure to novel agents rises with population growth. The next pandemic may strike a human population exposed due to rapid, unsustainable urbanization, climate change, destructive food harvesting and production practices, globalization and reliance on other nations for essential items.

The development of effective global systems for managing infectious disease surveillance and health intelligence is challenging, but excellent tools and agencies are available, and new tools are constantly emerging. The goal is to establish a global, collaborative surveillance and reporting mechanism, fund it generously and staff it with the best talent. This is not a project that needs to be started from the ground up, as many of the necessary assets and partnerships to build a collaboration already exist. The U.S. is well-positioned to grasp the baton, reframe military and security thinking and resource allocation in the health security context, and lead the next steps in global early warning and biodefense.

This article was originally published in September 2021 by the Daniel K. Inouye Asia-Pacific Center for Security Studies (DKI-APCSS) publication Security Nexus. It has been edited to fit FORUM’s format. The views expressed are the authors’ alone and do not necessarily reflect the official position of DKI-APCSS.