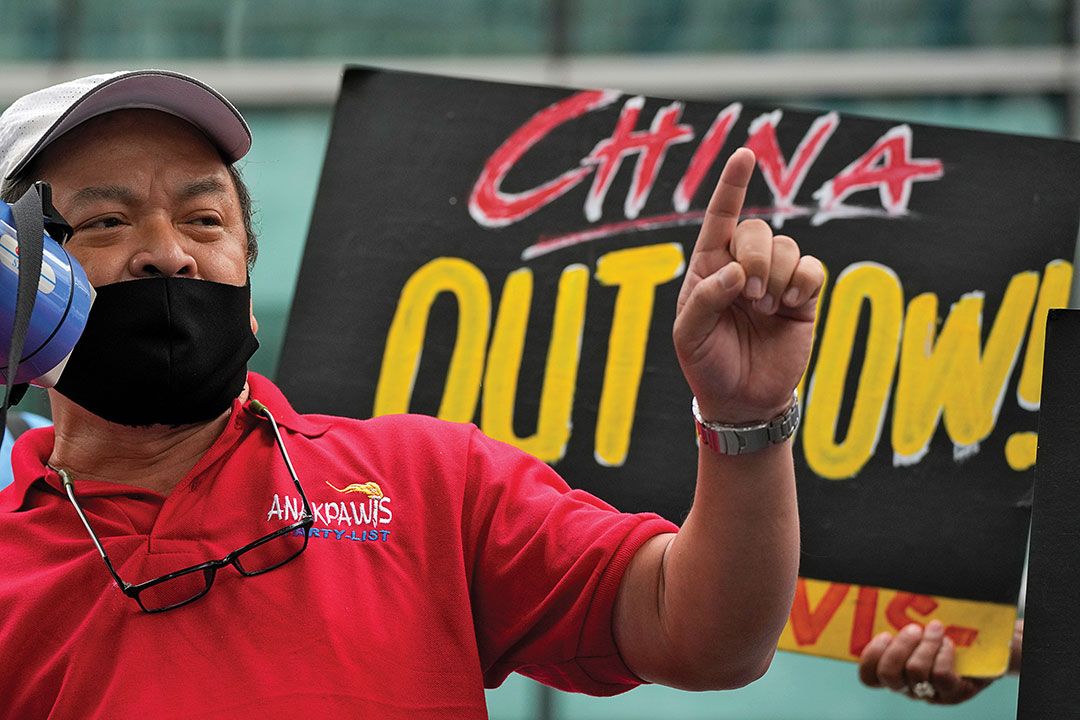 During a conversation with United States President Joe Biden, Chinese Communist Party (CCP) General Secretary Xi Jinping attempted to create the impression that a bipolar world order exists. Xi’s aggressive posturing during that November 2021 virtual summit was likely rejuvenated by his unchallenged mandate in the sixth plenary session of the CCP’s 19th Central Committee, despite that nations worldwide continue to rebalance among unipolar, bipolar and multipolar global orders, depending on their varying perceptions.

Unless the global community generates a realistic response across all domains — land, sea, air, space and cyberspace — Beijing will use all of its instruments of power — ethically and unethically — including exploiting the COVID-19 pandemic to become the sole superpower on the global stage and to establish a China-centric Indo-Pacific region.

Defining the Multidimensional Threat of China

The People’s Republic of China (PRC) has employed a strategy to incrementally encroach on the sovereign territory of other nations. This extension of the CCP’s “active defense” strategy, released in a 2015 white paper that called for a greater Chinese naval presence farther from the PRC’s shores, has led to the creation of artificial maritime features converted into military bases in the Indo-Pacific, proving that previous freedom of navigation operations and naval posturing by other nations were not adequate to deter the CCP from disturbing the rules-based order. The PRC has incrementally extended its sovereignty claims based on its one-sided interpretation of history in the South and East China seas and Taiwan, among other territories. A similar encroachment in India’s Ladakh region proved that the PRC will violate any signed agreement or treaty with other nations if the CCP requires.

When an international tribunal declared the PRC’s nine-dash line claims legally invalid in its territorial dispute in the South China Sea with the Philippines, the CCP ignored the ruling. The CCP showed that any verdict by any international institution that doesn’t suit the party’s strategic interests will be scrapped. With the expansion of its so-called comprehensive national power, the CCP started strengthening its military in all domains of warfare. It has already developed its navy to become the largest in the world in terms of fleet size. It has also taken steps, such as passing its China-centric Coast Guard Law in 2018 and its amended Maritime Traffic Safety Law in 2016, to challenge the international order by threatening the use of the global commons and the exclusive economic zones of countries with overlapping claims and access to one of the busiest global sea lines of communication (SLOC) in the Indo-Pacific.

In developing its multidomain warfare capabilities, the CCP has made rapid strides in space warfare in terms of assets and disruptive technology. The CCP has also boosted its conventional capabilities and plans to expand its nuclear arsenal to about 1,000 warheads by 2030. The list of the CCP’s force multipliers seems dangerously impressive with the application of artificial intelligence, quantum computing, long-range vectors, hypersonic systems and cyber capabilities. Although the quality of the CCP’s military hardware, which has historically been suspect, was achieved largely as a result of pirated technology or reverse engineering, it’s adequate to deter some potential adversaries and achieve the CCP’s longtime objective of “winning without fighting.”

The most concerning aspect of China’s capacity building is in the sphere of nonkinetic warfare capabilities, which entail the application of military capabilities in a cohesive manner while ensuring minimum physical contact of forces. Chinese economic, technological and digital offensives against other countries have rendered those nations increasingly dependent on China, eroding their independence and muting their responses to the CCP’s unethical overreach. With investments from the West, the PRC became a global manufacturer and supplier, gaining supply chain dependencies to an extent that the responses by individual countries will remain muted unless alternative resilient supply chain and manufacturing hubs are established. The PRC’s economic encroachment is mixed with an economic offensive on countries that don’t toe the CCP’s line, such as Australia. The CCP’s digital offensive is even more targeted, and its biological warfare capabilities have already shaken the world.

The CCP’s strategic use of the “three warfares” — namely media or public opinion, psychological and legal — is evidenced in its exhibition of newly acquired combat capabilities in terms of military hardware, technology, exercises and buying opinions. Its three warfares tactics appear to be gaining ground in election-oriented segments in politically active democracies.

The challenge presented by China is significant but not insurmountable because it has major vulnerabilities. Its long SLOC that passes through various chokepoints in the Indo-Pacific is a vulnerability. The PRC has sought to mitigate its risks through connectivity projects, such as the China-Pakistan Economic Corridor, the China-Myanmar Economic Corridor and its overall strategy to develop a network of Chinese military and commercial facilities, including ports and airfields, that extend from the Chinese mainland across Southeast Asia to the Horn of Africa, and develop diplomatic relations with the host countries to ensure its energy supply. The nodes of the necklace connect mainland China to the Arabian Sea and Persian Gulf via the South China Sea, the Malacca Strait and the Indian Ocean. Lately, the PRC seems to be seeking to extend the chain to Africa and Central Asia. Yet all the nodes potentially could be exploited.

Cracks are emerging in the Chinese economy after the failure of many One Belt, One Road (OBOR) infrastructure investment projects, the bursting of the real state economic bubble and the CCP’s cleansing, or “common prosperity,” drive to redistribute wealth that shook up capitalists and investors. The CCP’s attempts to crush dissent in regions such as Xinjiang, Tibet and Hong Kong also reveal its fear of losing control, evident in its domestic surveillance budget and use of techniques such as profiling. To quell dissent, the CCP spends more on internal security than on national defense. China’s economy and its SLOC are the center of gravity in tackling the challenges posed by the PRC because China’s people will continue to tolerate Xi’s autocratic regime as long as it keeps delivering economically. Without economic successes, however, China has few friends internally or externally. Targeting human rights abuses may cause the CCP leadership discomfort, but the issue falls short of a strategic vulnerability at least for now. 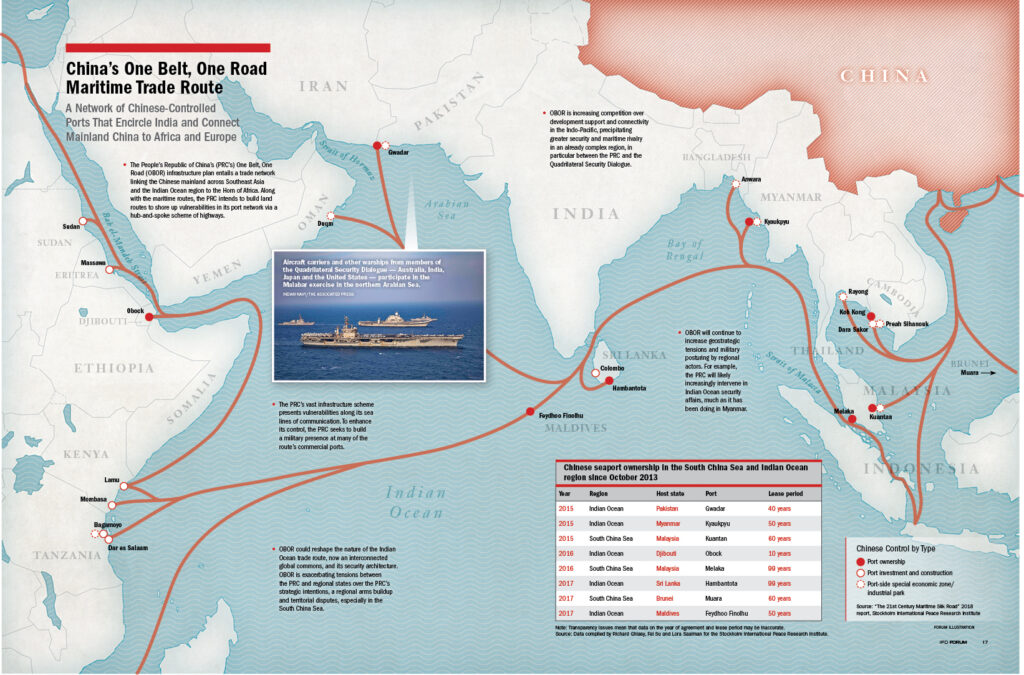 Why Democracies Need to Unite

China has been trying to sell the narrative that its system of governance is better than democracy based on its claims that it has fared better during the COVID-19 pandemic in terms of public health outcomes and economic recovery. The PRC’s OBOR scheme, while increasing China’s strategic footprint globally, has pushed many needy countries into its unsustainable debt structures and restricted their sovereign choices in the absence of better financing alternatives, notwithstanding the many problems with OBOR projects. To impose the CCP’s concept of “unrestricted warfare,” the PRC is seizing real estate, exploiting host countries’ critical mineral resources such as rare earth minerals, installing dual-use bases worldwide for potential military purposes and manipulating the global financial system. The CCP is also increasingly confident that democracies won’t be able to come together on many issues because they often have dissenting views and groups that are easy to exploit. The China challenge has become big enough for a collective response by like-minded democracies.

The Indo-Pacific is the economic, trade and population hub of the future, with the largest markets, some of the busiest SLOCs and vast natural resource potential. All of the world’s powers seem to be gravitating toward the region, which also possesses some of the most dangerous flashpoints, such as the Korean Peninsula, the South and East China seas, and Taiwan. It also is where Chinese influence is approaching a maximum. To take on the Chinese challenge, regional partners along with like-minded democracies need to synergize their actions, as Xi tries to force the nine-dash line on members of the Association of Southeast Asian Nations (ASEAN) and the CCP becomes increasingly emboldened to alter the global balance. The United Nations can do little to stymie the PRC, given its veto power as a U.N. Security Council permanent member and its growing clout in other U.N. organizations. Other multilateral, issue-based organizations will be required to deal with segments of the CCP’s multidimensional threat, including kinetic and nonkinetic warfare elements.

Notwithstanding the Chinese threat, a direct military confrontation is cost-prohibitive for all, given the destructive potential possessed by major world powers. As a result, bilateral and multilateral groupings assume even greater significance, among them: the Quadrilateral Security Dialogue, or Quad, which includes Australia, India, Japan and the U.S.; the new security alliance of Australia, the United Kingdom and the U.S., known as AUKUS; the Five Eyes (FVEY) alliance of intelligence agencies from Australia, Canada, New Zealand, the U.K. and the U.S.; and NATO.

Countering Chinese maritime threats requires collective action by like-minded democracies, strategic partners and allies to create a multifront approach that can threaten the PRC’s SLOC at various chokepoints and draw the People’s Liberation Army Navy (PLAN) as far from China’s eastern seaboard as possible. That would overextend the PLAN as it sought to protect the SLOC, thus creating vulnerabilities along its network of Chinese military and commercial facilities across Southeast Asia, which could be blockaded.

The Quad’s March 2021 statement calling for a free, open, inclusive and healthy Indo-Pacific “anchored by democratic ideals and unrestrained by coercion” presented the CCP with a fundamental challenge to its dream of a China-centric region. The Quad’s highlighting of freedom of navigation and overflight did not go unnoticed — the CCP is fully aware that it is being referred to as a threat to a Free and Open Indo-Pacific.

Although a nonmilitary grouping, the Quad has shared security challenges to address, including in cyber, space, critical technology, counterterrorism, infrastructure and health security. The Quad members, for example, are collaborating to provide 1 billion COVID-19 vaccines globally.

India’s location makes it crucial to the global response to the challenge of the PRC, on the continent and in the maritime domain. India is in a long-running standoff with China over their shared border and also dominates the most vulnerable segment of China’s SLOC in the Indian Ocean. The military capacity building of India is important for a strong response to China across all domains; therefore, strategic partners need to collaborate in developing India’s military capacity.

Through AUKUS, Australia eventually will acquire nuclear-powered submarines, which will help blunt Chinese expansionism in the Indo-Pacific. Similarly, efforts by the U.S. and other Quad Plus members to collaborate with global stakeholders, including ASEAN members facing Chinese coercion, are a positive step. Beijing cannot miss the message: Military interoperability among like-minded nations will prove a powerful deterrent should Chinese aggression cross the threshold of global tolerance.

There also is a need to establish alternative supply chains and trade and technology ecosystems that are independent of China, such as initiatives launched by the Quad. These can be supplemented by economic partnerships such as the Build Back Better World involving the Group of Seven industrial nations and other cooperative efforts to counter China’s OBOR scheme, such as the Blue Dot Network established by Australia, Japan and the U.S., and the European Union’s Global Gateway program, valued at U.S. $340 billion.

Cyber, space, artificial intelligence, hypersonic weapons, quantum technologies, undersea capabilities, biological threats and nuclear expansion require a coordinated global response, with technological development and sharing. The Quad has the potential to become one of the most effective tools for resisting Chinese adventurism. Expanding the Quad Plus with a formalized structure, meanwhile, will be critical for dealing with the challenges posed by an aggressive China.