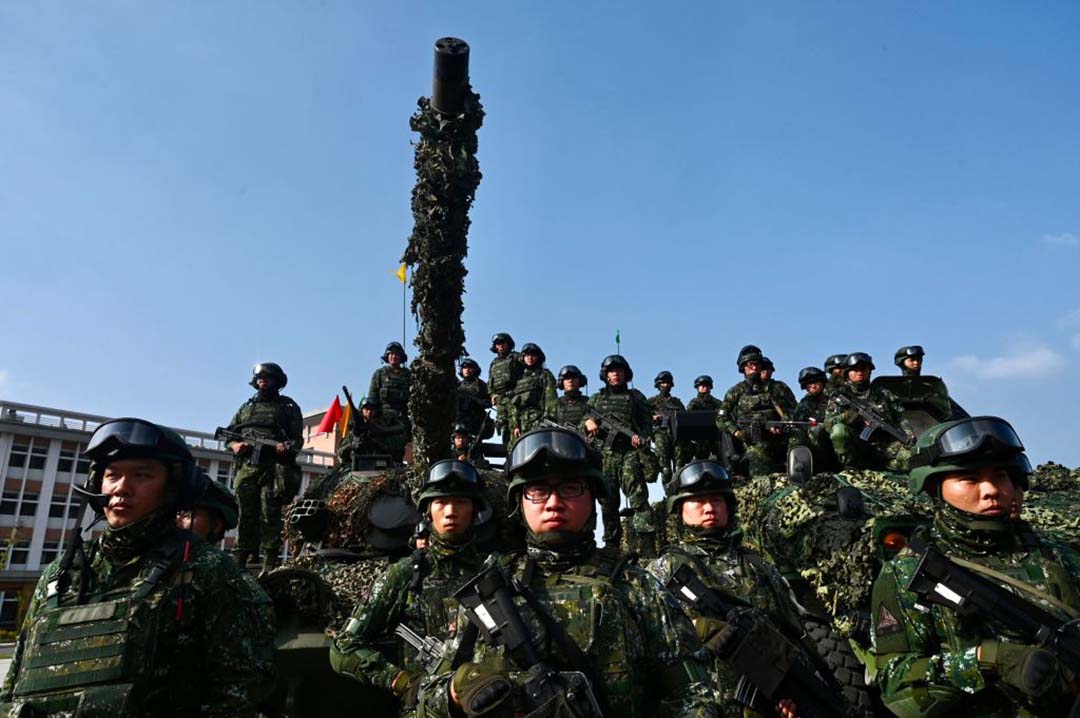 Among other preparations, Taiwan forces repelled a mock invader at a harbor near Taipei, the capital, and moved fighter jets to remote mountainside bunkers to survive enemy missile strikes, Reuters reported. Nearly two dozen warships, including destroyers and frigates, intercepted a would-be invasion force off the island’s northeast coast as domestically manufactured Ching-kuo fighters and other aircraft launched strikes. (Pictured: Taiwan Soldiers pose with a CM-11 battle tank during an exercise at a military base in Kaohsiung, southern Taiwan.)

Taiwan’s Navy also spotlighted its new minelayer and a stealth corvette with an array of anti-ship missiles dubbed the “aircraft carrier killer.”

With “authoritarian forces” threatening to undermine the status quo in the Indo-Pacific region, Taiwan stands on the geopolitical front-line to “fight against the authoritarian aggression,” Taiwan President Tsai Ing-wen said at a security forum during the exercise, according to Reuters.

Those concerns came into sharp focus just days later as the People’s Liberation Army (PLA) staged its largest-ever drills in the Taiwan Strait, the 160-kilometer-wide waterway separating the democratic island from communist China, which claims Taiwan as its territory. Taiwan’s Defense Ministry said the PLA launched and number of Dongfeng ballistic missiles in waters around the island August 4, the first such live-fire exercise by the Chinese military since 1996, an incident that came to be known as the Third Taiwan Strait Crisis, according to Reuters. A number of Chinese ballistic missiles landed in waters within Japan’s exclusive economic zone (EEZ), drawing condemnation from Tokyo, Reuters reported. “To have five Chinese missiles fall within Japan’s EEZ like this is a first,” Japanese Defense Minister Nobuo Kishi said. “We have protested strongly through diplomatic channels.”

Beijing routinely threatens to use force to seize control of Taiwan, which has never been part of the People’s Republic of China.

As part of the multiday PLA maneuvers, military planes and navy ships repeatedly crossed the Taiwan Strait median line, Reuters reported. Taiwan’s military deployed missile systems and scrambled fighter jets to track PLA aircraft breaching the line. “They flew in and then flew out, again and again,” a Taiwan source said. “They continue to harass us.”

The hastily scheduled PLA drills were seen as the CCP’s overwrought response to the visit of a United States delegation that included House Speaker Nancy Pelosi to Taiwan in early August as part of an Indo-Pacific tour. The drills violate United Nations rules and threaten freedom of navigation on the sea and in the air, Taiwan officials told Reuters. Leaders from Europe, North America, Southeast Asia and elsewhere warned of the risk of miscalculation and cautioned against any attempt to change the status quo in the region by force.

A two-year pattern of repeated incursions into Taiwan’s air defense identification zone by Chinese fighters has already spiked tensions in the strait. Taiwan says the intrusions are part of the CCP’s gray-zone warfare to wear out and, eventually, overwhelm the island’s defenses.

Russia’s invasion of Ukraine in February 2022 and its ongoing assault, meanwhile, have exacerbated fears of the CCP storming Taiwan. Beijing has refused to condemn Russia or join international sanctions against Moscow. Rather, CCP General Secretary Xi Jinping and Russian President Vladimir Putin have touted a “no limits” partnership, with the authoritarian regimes conducting joint military drills in mid-2022.

Faced with a much larger CCP military, Tsai has prioritized modernizing Taiwan’s forces, including through domestic development of weaponry and other defense assets. Taiwan is considering a 4% increase in defense spending to almost U.S. $12.8 billion for the next fiscal year, as well as additional funding to buy F-16V fighter jets, domestically produced missiles and other advanced weapons systems, the Taipei Times newspaper reported July 31, 2022.

The island’s focus on asymmetric defense, known as the “porcupine strategy,” seeks to deter invaders by promising to impose a heavy toll. Analysts have noted how Ukraine’s success in slowing, halting and reversing Russian offensives has turned the conflict into a war of attrition.

Taiwan is analyzing the war in Europe, as well as the CCP’s military maneuvers, said Maj. Gen. Lin Wen-huang, who oversees combat and planning affairs for the island’s Defense Ministry. “We will take reference of the lessons from the Russian-Ukrainian war to continue to improve our capabilities in asymmetric warfare, cognitive warfare, electronic warfare and the reserve force,” he said, according to the India-based news website Firstpost.

As Taiwan’s military drilled, a group of Japanese lawmakers visited the island to discuss regional security with Tsai, including preparations for potential conflict, The Associated Press (AP) reported. “We need to think ahead about what kind of situations could happen, what kind of laws and agreements we should prepare, and what kind of armaments we could use,” former Japanese Defense Minister Shigeru Ishiba said. “We need to work together to reach consensus on this ahead of anything that could happen.”

Ishiba said Japan is working closely with the U.S. to prevent conflict in the region.

Taiwan “is a very critical line of defense of the first island chain,” Tsai said, according to AP. “We will continue to deepen our cooperation with Japan and other democratic partners to uphold the Indo-Pacific area’s peace and stability.”