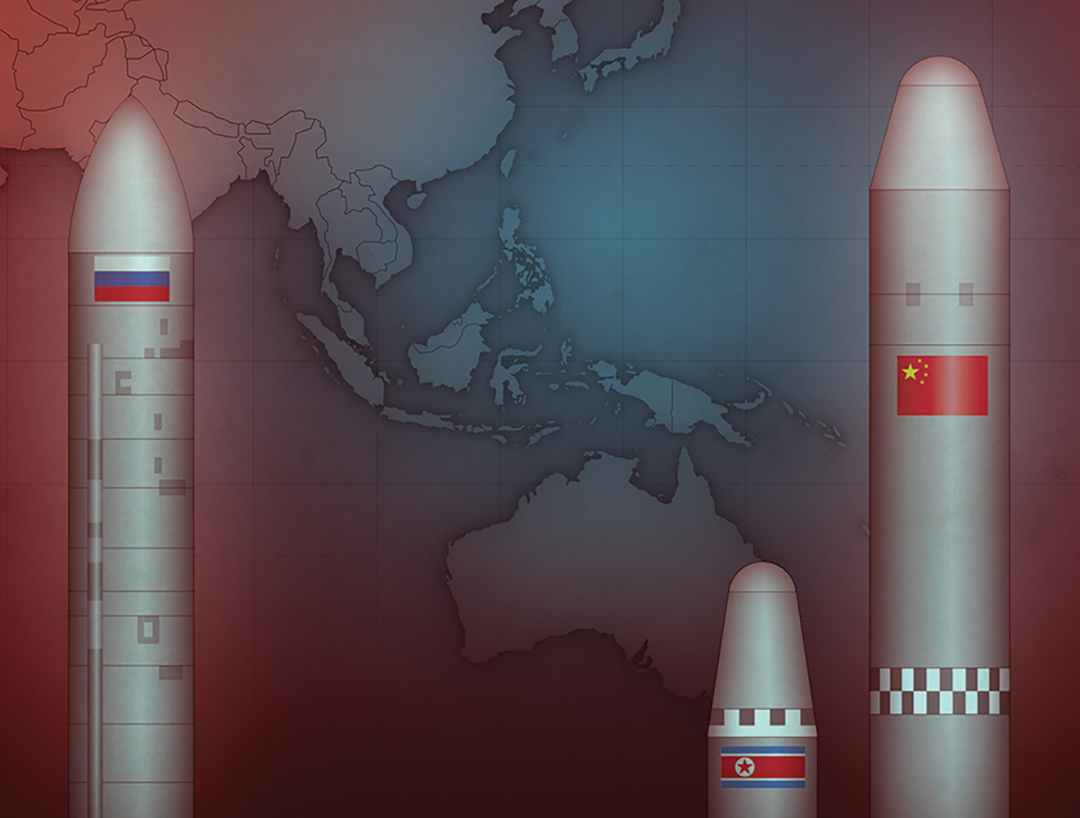 United States Strategic Command (USSTRATCOM) at Offutt Air Force Base near Omaha, Nebraska, combines the U.S. nuclear command and control mission with the global responsibility for strike missions and missile defense. The command is responsible for providing U.S. leadership a greater understanding of threats from around the world and viable means and options to rapidly respond to them.

USSTRATCOM deters strategic attacks and employs forces to guarantee the security of the U.S. and its allies. It is responsible for prevailing in any strategic conflict and for developing the intellectual capital to forge 21st century strategic deterrence.

The command’s nerve center is the Global Operations Center, which provides situational awareness and gives the USSTRATCOM commander the mechanism to command and control the nation’s strategic forces. FORUM recently interviewed the commander, U.S. Navy Adm. Charles “Chas” A. Richard, and discussed deterrence in an era of strategic competition.

FORUM: What challenges does the global strategic environment present to deterring aggression and coercion? Can you expound on how security challenges have evolved in the Indo-Pacific region in terms of technologies and weapons systems?

Adm. Richard: For the first time in our history, the nation is on a trajectory to face two nuclear-capable, strategic peer adversaries at the same time, who must be deterred differently. Today, both China and Russia have the ability to unilaterally escalate a conflict to any level of violence, in any domain and in any geographic location. We have not faced competitors with this ability in over 30 years.

As outlined in the most recent Interim National Security Strategic Guidance, China, in particular, has rapidly become more assertive. They should no longer be viewed as a lesser-included case to Russia but as a pacing nuclear threat. Collectively, China’s strategic nuclear modernization expansion raises troubling concerns and complements the conventional capability growth reported by U.S. Indo-Pacific Command (USINDOPACOM) and other combatant commands.

In addition, over the past decade, Russia has recapitalized roughly 80% of its strategic nuclear forces, strengthening its overall combat potential with an imposing array of modernization efforts and novel weapons programs designed to ensure a retaliatory strike capability by all three triad legs.

The basic deterrence fundamentals against such threats have not changed. We strive to deny any adversary their aim or impose a cost greater than what they seek, such that the benefit of restraint outweighs the perceived benefit of their possible action. These deterrence fundamentals apply from the gray zone throughout the spectrum of conflict that today is neither linear nor predictable. Deterrence operates continuously from peacetime, through the gray zone, worldwide, across all domains and into conflict. It requires integrated planning and resourcing from the entire [U.S. Defense] Department, across the whole of government and in cooperation with allies and partners.

FORUM: What is USSTRATCOM’s role in providing strategic deterrence and maintaining security in the Indo-Pacific region?

Adm. Richard: U.S. Strategic Command’s mission is to deter strategic attacks and employ forces as directed to guarantee the security of the nation and assure our allies and partners. In that role, USSTRATCOM sets the conditions necessary for joint force operations around the world. Every operation plan in the department and every capability assumes that strategic deterrence will hold. None of our plans and no other capability will work as designed if strategic deterrence, and in particular nuclear deterrence, fails.

In addition, the command’s capabilities also support the nation’s formal extended deterrence commitments that assure European, Asian and Pacific allies and partners. No country should doubt the strength of our extended deterrence commitments or the strength of U.S. and allied capabilities to deter, and if necessary defeat, any potential adversary’s nuclear or non-nuclear aggression.

FORUM: Why are multilateral approaches important for regional security? Do you have a unique approach for China? North Korea? Russia?

Adm. Richard: Multilateral approaches are important for security as our allies add breadth, depth and resolve. Their resistance to authoritarian visions of the world order strengthens the rules-based international system and magnifies the benefit of restraint among our competitors.

We must maximize our ability to prevent strategic deterrence failure and find ways to reduce the risk of miscalculation in a crisis by engaging all elements of national power to effectively communicate our resolve to potential adversaries. The command stands ready to support diplomatic efforts as a tool of first resort, using innovative and reliable ways to deter strategic threats and set favorable conditions to shape the global environment.

FORUM: How would you define 21st century strategic deterrence?

Adm. Richard: The U.S. Interim National Security Strategic Guidance highlights that, “We must also contend with the reality that the distribution of power across the world is changing, creating new threats.” China and Russia are challenging our strength through a wide array of activities that warrant a concerted and integrated whole-of-government response.

This strategic competition demands we be ready for any threat in any domain at any time. Potential adversaries are building advanced nuclear capabilities, fielding increasingly capable conventional forces and exploiting seams below the level of armed conflict in an attempt to gain strategic advantages in pursuit of their national objectives.

The U.S. and our allies and partners must also account for the possibility of conflict leading to conditions which could very rapidly drive an adversary to consider nuclear use as their least bad option.

FORUM: What must the U.S. do to maintain its strategic advantages in the near and the long terms?

Adm. Richard: The nation requires a fully modernized nuclear force and supporting infrastructure to ensure the solemn obligation to protect the security of the American people is upheld.

As reaffirmed by every presidential administration over the past 60 years, a safe, secure and effective nuclear force remains the most credible combination of capabilities to deter strategic attack. Current programs of record have been repeatedly shown to be the best way to meet those requirements.

Additionally, our strength is in our ability to work together. Integrating our plans and resources around a commonly defined, threat-based military strategy that includes inputs from across all elements of our national power will posture us against our long-term threat.

FORUM: How would you describe your priorities for achieving integrated strategic deterrence and for globally integrated operations?

Adm. Richard: USSTRATCOM will continue to engage with other combatant commanders to integrate planning, operations and activities and highlight the importance of synchronization among all instruments of national power for strategic deterrence.

The importance of our allies in the strategic deterrent equation must not be understated; the threat can manifest in space or cyberspace, and allied participation in developing tailored deterrence achieves our collective security.

FORUM: How important are submarines to the defense of the Indo-Pacific?

Adm. Richard: The nuclear triad is made up of three attributes (land-based, sea-based, and air-delivered). The nuclear-powered ballistic missile submarine (SSBN) is the nation’s most survivable and enduring nuclear strike platform. The SSBN, which stands for submersible ship, ballistic-nuclear, contributes to deterrence and assurance messaging through partial or full generation of our fleet. With the intercontinental-range Trident II D5 missile, our SSBNs patrol the world’s oceans virtually undetected, providing an assured response capability in any scenario.

This assured second-strike capability addresses deterrence gaps in ways unique from other legs of the triad. When paired with its survivability, this crucial capability gives the U.S. president significant latitude for response options.

FORUM: How do you plan to modernize the land-, sea- and air-based components of strategic deterrence?

Adm. Richard: USSTRATCOM utilizes capabilities provided by the individual services. The command works with the services to ensure necessary requirements are met when elements of the triad are recapitalized and stands ready to command and control these new weapons systems as they become available.

FORUM: What are your goals for hypersonic strike technologies? Are we behind our greatest competitors?

Adm. Richard: Hypersonic weapons show promise to be the conventional complement the nuclear force needs to continue deterring adversaries and offer an opportunity to take further steps to reduce the number of nuclear weapons in our national security strategy. Conventional hypersonic weapons will fill an important role by providing the president with options on holding high-value, time-sensitive and other targets at risk without crossing the nuclear threshold.

Our potential adversaries have dramatically increased their emphasis on weaponization of hypersonic technologies, creating a potential capability gap we must not allow to stand.

Developing and fielding hypersonic weapons has long been a USSTRATCOM requirement and a department priority. They will enable responsive long-range, conventional strike options against distant and defended threats when other forces are unavailable, denied access or not preferred.

FORUM: What about missile defense?

USSTRATCOM executes its responsibilities for coordinating global missile defense planning and operations support, including advocacy for capabilities and enhancements, and joint training and education in coordination with combatant commands, services and agencies.