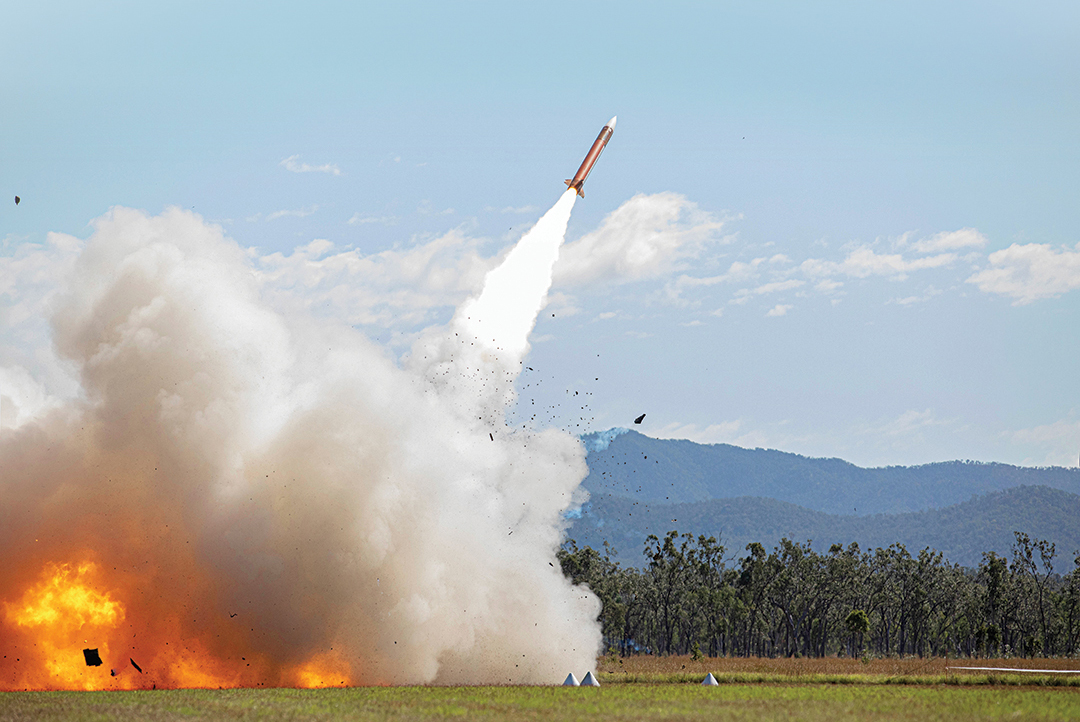 hen North Korea tested ballistic missiles seven times in less than a month in January 2022, it violated several United Nations Security Council resolutions. Pyongyang kicked off the record month of testing by launching a hypersonic missile capable of maneuvering at high speeds, and it followed that up with a flurry of ballistic missile launches into the Sea of Japan.

North Korea’s self-ascribed deterrent programs, coupled with the snowballing military buildup of the Chinese Communist Party, have the United States and its allies doubling their deterrence efforts. In an age of hypersonic weapons that can travel at five times the speed of sound and long-range missiles that can change trajectory, today’s threats require what U.S. Secretary of Defense Lloyd Austin calls “integrated deterrence,” a security approach tailored to the region’s landscape with a partnership of allies and friends working together.

“The cornerstone of America’s defense is still deterrence, ensuring that our adversaries understand the folly of outright conflict,” Austin said in an April 2021 change-of-command ceremony at U.S. Indo-Pacific Command in Hawaii. “Throughout American history, deterrence has meant fixing a basic truth within the minds of our potential foes: And that truth is that the costs and risks of aggression are out of line with any conceivable benefit.”

Going forward, that deterrence philosophy must be highly integrated across all services and domains and with allies and partners, Austin said. Nowhere is this integrated deterrence philosophy more apparent than in the Indo-Pacific, where the U.S. and its allies are working together on everything from small satellites to nuclear submarine technology to deter potential adversaries.

A Patriot surface-to-air missile pierced the skies over Queensland, Australia, in July 2021, marking the first time the technology had been used in Australia and signaling the type of deterrence the U.S. is trying to achieve. U.S. Soldiers from the 38th Air Defense Artillery Brigade, 94th Army Air and Missile Defense Command, destroyed two unmanned aerial vehicles with Patriot missiles while operating with Australian Defence Force personnel during exercise Talisman Sabre 21, which involved more than 17,000 participants from seven nations.

In addition to demonstrating how U.S. forces can rapidly deploy anywhere in the region, the exercise showed a technological integration the allies believe is key in 21st century warfare. “We successfully demonstrated that we can operate with Australian weapons systems, that we can coordinate communications and engage targets in the sky together,” U.S. Army Capt. Phillip Le, commander of Alpha Battery, said in a news release.

The historic Australia launch was “just tremendous and a real privilege to see in action,” said Maj. Gen. Jake Ellwood, commander of Australia’s Deployable Joint Force Headquarters, according to Australian Security Magazine. The MIM-104 Patriot missile can travel at about 1,715 meters per second and strike targets that include aircraft and ballistic and cruise missiles.

Such military exercises involving the U.S. and its Indo-Pacific partners hone technological expertise and generate “signaling” value to potential adversaries, Bruce W. Bennett, a defense analyst with the Rand Corp., told FORUM. “North Korea in particular would love to see the Republic of Korea-U.S. alliance broken,” Bennett said. “That’s one of their key objectives — to break the alliance if they can. And they’re doing a lot of work to that end. China would also be happy to see U.S. alliances in the region broken. China is trying to establish a degree of leverage or, eventually, dominance over all of its neighbors.”

By sharing technology with its regional partners, the U.S. is offering an alternative that involves partnership rather than subjugation, he said. “The U.S. isn’t trying to dominate those alliances,” Bennett said. “Instead, it’s giving out its most modern technology in many cases to its allies. The U.S. is simply trying to make it clear that in a world where China would like to dominate, Washington is trying to maintain an ability to provide an alternative to Chinese dominance and maintain a good relationship with the regional countries without trying to double the U.S. defense budget.”

Integrated deterrence isn’t only about signaling, however. It’s about mission success. Bennett offered the hypothetical example of North Korea firing one of its Nodong intermediate-range ballistic missiles into South Korea. “If you’ve got a radar for a Patriot interceptor that’s looking at the missile coming in, it’s looking down the barrel of the gun, so to speak,” Bennett said. “It’s relatively hard to tell the exact trajectory and that sort of thing. But if that radar is keyed to a radar sitting in Japan, looking at the trajectory from the side, it is far easier to determine exactly what maneuvers or what the trajectory itself looks like because you’re getting both the ‘down the barrel’ and ‘from the side’ perspectives. And that makes it a lot easier to be effective in intercepting it.”

If Australia, Japan, South Korea and the U.S. operate radars in concert, there is a cost-sharing benefit, too, Bennett said.

When Austin talks about integrated deterrence, he points out that integration needs to occur across services, with allies and partners and beyond the traditional domains of air, land and sea. Space and cyberspace are where 21st century conflicts could begin, and partnerships in those domains are critical for detecting and deterring attacks.

To that end, Japan and the U.S. plan to collaborate on the deployment of a network of small satellites in low Earth orbit to detect and track next-generation missiles, the Nikkei Asia website reported in August 2020. The U.S. $9 billion project is expected to be operational by the mid-2020s. The evolving nature of the region’s missile threat requires more space-based sensors, the article concluded. The PRC possesses about 2,000 medium-range missiles capable of striking Japan, according to the Nikkei report, and it has hundreds of nuclear warheads. North Korea has hundreds of medium-range missiles and continues in its quest to miniaturize nuclear warheads. These missiles fly in parabolic trajectories, which makes them easier to track and intercept with satellites and radar systems operated by Japan and the U.S.

North Korea, the People’s Republic of China (PRC), and Russia, however, are developing weapons designed to evade these shields. The PRC and Russia are testing hypersonic missiles, which fly at more than five times the speed of sound and at low altitudes, and North Korea is experimenting with long-range missiles that can change trajectory.

The ballistic missiles North Korea fired into the Sea of Japan in September 2021 flew at low altitudes and irregular trajectories, making them difficult to intercept, according to a report by Jiji Press. “It’s clear that the missiles were designed to evade missile defense systems of Japan and the United States,” an official at Japan’s Defense Ministry said, according to the report.

In another historic move, the United Kingdom and the U.S. announced in September 2021 that they would help Australia acquire nuclear-powered submarines as part of a trilateral security partnership. Known as AUKUS, the partnership will establish channels of information sharing and foster joint efforts to develop advanced technologies in cybersecurity, artificial intelligence, quantum computing and undersea capabilities, the news website Axios reported.

Teams from the three countries will work for 18 months to identify the best way to deliver nuclear-powered submarines to Australia. The U.S. had previously only shared its nuclear submarine technology with the U.K.

U.S. President Joe Biden heralded the pact as strategically necessary. “Our nations and our brave fighting forces have stood shoulder to shoulder for literally more than 100 years, through the trench-fighting in World War I, the island-hopping in World War II, during the frigid winters in Korea and the scorching heat in the Persian Gulf,” President Biden said at a news conference, flanked virtually by U.K. Prime Minister Boris Johnson and Australian Prime Minister Scott Morrison. “Today we take another historic step to deepen and formalize cooperation among all three of our nations. Because we all recognize the imperative of ensuring peace and stability in the Indo-Pacific over the long term,” he said.

Bennett explained that geography plays a key role in the decision. Diesel submarines create toxic exhaust that must be evacuated from the vessel periodically, so diesel subs must “snorkel” or surface to do that. “If the Japanese or South Korean submarines have diesel technology, well, they’ve got lots of islands that they can go to in their territorial waters and snorkel or surface, and then go back underwater and disappear,” Bennett said. “But if a submarine from Australia is trying to get up to Japan or South Korea, it has to transit a very long distance in front of the east coast of China. And as China’s surveillance technology gets better, China’s potentially able to detect those submarines and potentially intercept them. Today it’s probably not such a big deal. But in 20 years, which is roughly when the nuclear submarines for Australia will become available, it probably will be a very big deal.”

From missile technology to nuclear propulsion, the U.S. is demonstrating its commitment to a Free and Open Indo-Pacific. The integrated deterrence approach relies not only on technology sharing but also intelligence and information sharing. That, defense officials said, may require economic and diplomatic efforts in some instances. “If we are really going to deter countries that are rising as fast as China, or are getting as assertive and aggressive as Russia, we’re going to need friends,” Colin Kahl, U.S. undersecretary of defense for policy, told colleagues during a June 2021 meeting at the Pentagon, according to Department of Defense News. “We’re going to need to integrate them into our understanding of what deterrence means.”