United States joint forces in the Indo-Pacific combined across multiple warfighting domains in June 2022 to sharpen regional and global power projection capabilities and to ready for crises ranging from armed conflict to disaster relief.

“This training builds real-world proficiency in sustaining joint forces through detecting, locating, tracking and engaging units at sea, in the air, on land and in cyberspace in response to a range of mission areas,” according to a U.S. Indo-Pacific Command (USINDOPACOM) news release.

Under the nations’ Compact of Free Association, the U.S. is responsible for the defense of Palau, which gained independence in 1994.

“What we do to ensure we have a free Indo-Pacific is very important, which is why we train very hard every single day,” U.S. Army Lt. Col. Tony Falcon, commander of the 1st Battalion 1st Air Defense Artillery Brigade, told The Guam Daily Post. “It’s very important for us to fire a missile, or to engage a target, to demonstrate that we can do it any location anywhere … with very short notice.”

In another first, U.S. Marines executed rapid infiltration of a high mobility artillery rocket system (HIMARS) on the Palauan island of Angaur, with the I Marine Expeditionary Force providing command-and-control functions for the infiltration, known as a HI-RAIN, from a forward location in Guam. (Pictured: A high mobility artillery rocket system launches during exercise Valiant Shield 2022 in Angaur, Palau.) 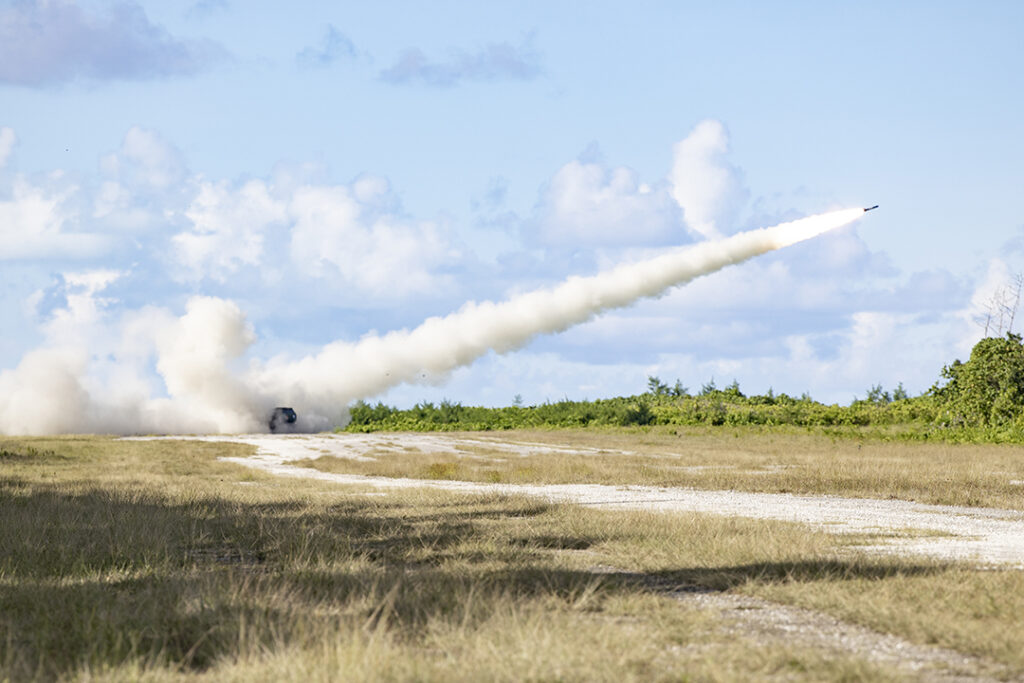 “This process is based on a multitude of interoperable systems involving intelligence, communications, and command and control,” U.S. Marine Corps Capt. Andrew Richards said in a news release. “The ability to do a HI-RAIN on expeditionary airfields, such as Angaur, means there is a variety of terrain that we can posture fires assets on across the Indo-Pacific. The use of Air National Guard air assets to insert HIMARS on the island required detailed planning and coordination between Marine Corps and Air Force personnel.”

U.S. joint forces have routinely trained across the Indo-Pacific for more than 75 years in accordance with international law, demonstrating their ability to project power while simultaneously defending the homeland. “Integrated training provides a full range of options to succeed in defense of U.S. interests and those of its allies and partners around the world,” according to USINDOPACOM.

“We’re here to promote a Free and Open Indo-Pacific region and operating out of Palau makes it possible to accomplish that goal,” 1st Lt. Joshua “Super” Novick, of the 356th Expeditionary Fighter Squadron, said in a U.S. Air Force news release. “We have a great relationship with Palau, so it’s awesome to be able to come here and work with them to build our relationship with one of our allies in the region.”