Valiant Shield 2022 offered more than just a chance for United States joint forces to exercise their cross-domain capabilities and test emerging technologies, military leaders say. It presented an opportunity to collaborate with Indo-Pacific partners and reinforce relationships through transparent and inclusive operations designed to minimize potential disruptions to host communities. (Pictured above: A PAC-2 Patriot interceptor missile is launched at a Kratos Defense Firejet cruise missile surrogate target during the Patriot live-fire exercise as part of Valiant Shield 22.)

“These types of exercises are a great opportunity to learn from one another about cultures, interests and shared values,” Maj. Nicholas Chopp, a spokesman for the 94th Army Air and Missile Defense Command, told the Pacific Island Times magazine in Guam.

The 12-day biennial exercise took place in June in Guam, the Northern Mariana Islands and Palau. With 15 ships, more than 200 aircraft and 13,000 personnel from the U.S. Air Force, Army, Marine Corps, Navy and Space Force, Valiant Shield was the biggest exercise held in Palau since World War II, officials said.

“It has been a great privilege to spend time with the people of Palau, who have been amazingly welcoming, friendly and interested in what we do,” Chopp said.

The 94th Command, which is headquartered at Joint Base Pearl Harbor-Hickam in Hawaii, conducted the first Patriot missile live-fire in Palau, successfully launching two PAC-2 Patriot interceptor missiles to destroy a simulated cruise missile target at an altitude of 3,000 meters, about 35 kilometers off Palau’s coast. It was also the first operational live-fire incorporating cuing data from a U.S. Air Force F-35A fighter jet, a new capability that officials said extends the Patriot system’s range for detecting and engaging enemy missiles and drones. (Pictured: A U.S. Air Force B-1B Lancer assigned to the 34th Expeditionary Bomb Squadron flies over a MIM-104 Patriot missile launcher assigned to the Charlie Battery, 1-1 Air Defense Artillery Battalion at Palau International Airport in support of Valiant Shield 22 on June 12, 2022.) 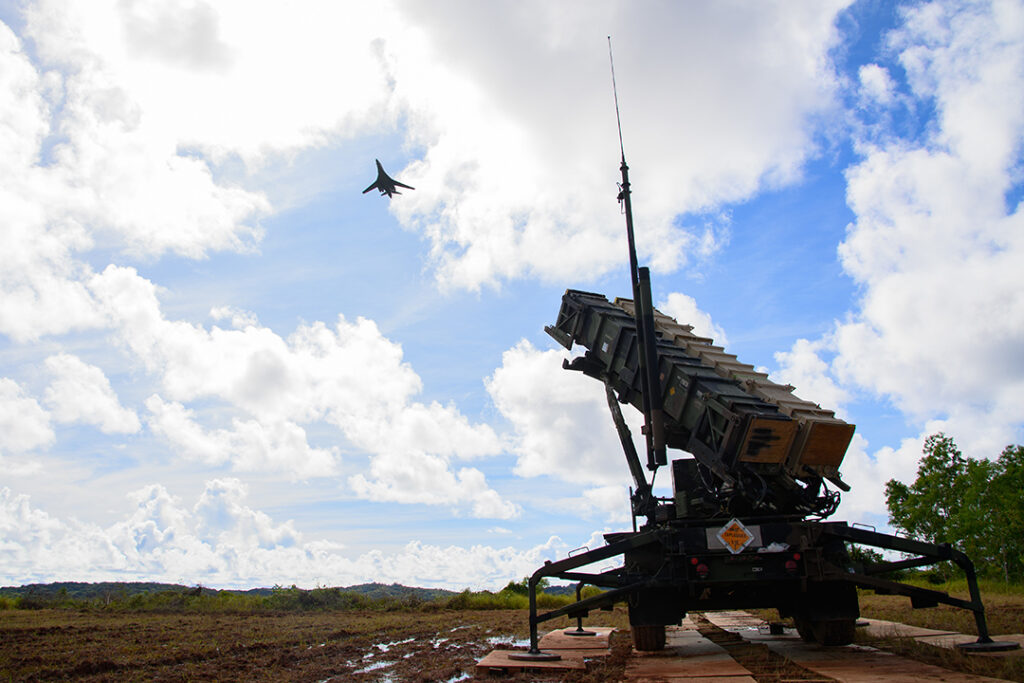 The 94th Command coordinated air space clearance with the Palauan government, and vessels from the Pacific island nation’s Marine Law Enforcement Division established a perimeter to ensure the area was clear of mariners and marine animals before the live-fire exercise. Local media representatives were invited to view the launch.

“Safety is our No. 1 priority for every live-fire exercise,” Chopp said, noting that the U.S. Army had conducted four such exercises in the past two years without incident.

Other than some complaints about the temporary increase in noise from aircraft and other military assets, residents reacted positively to Valiant Shield, Jennifer Anson, Palau’s national security coordinator, told The Guam Daily Post newspaper.

Under the nations’ Compact of Free Association, the U.S. is responsible for the defense of Palau, which gained independence in 1994. “We look forward to continuing to build relationships with the people of Palau, and the dozens of our other partners and allies in the Indo-Pacific region,” Chopp said.

The advanced level of coordination between U.S. forces and local authorities to ensure Valiant Shield’s success was in stark contrast to recent joint military drills by Russia and the Chinese Communist Party (CCP), which sparked concern in Japan and South Korea.

The Japanese Defense Ministry announced in late May 2022 that six CCP and Russian nuclear-capable bombers had flown near the Japanese archipelago, and that a Russian electronic intelligence aircraft was spotted over the Sea of Japan, The Diplomat magazine reported. The Japan Air Self-Defense Force scrambled fighter aircraft in response to the Russia-CCP drill, which occurred as the leaders of Australia, India, Japan and the U.S. met for a Quadrilateral Security Dialogue summit in Tokyo.

More than 10 CCP and Russian warships, meanwhile, sailed near Japan in what officials there called a “show of force.”

Chinese and Russian claims that the joint drills were held in accordance with international law failed to sway Tokyo, which conveyed serious concern to both nations through diplomatic channels, The Diplomat reported.