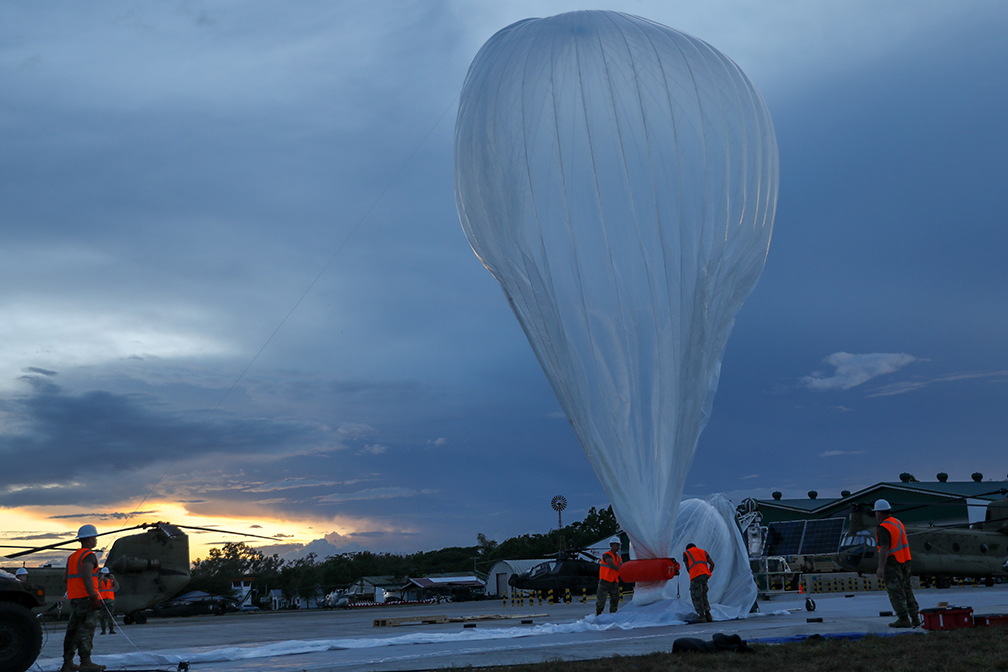 The Armed Forces of the Philippines and United States forces used high-altitude balloons to enhance combined maritime domain awareness during Balikatan 2022, a large-scale bilateral exercise that showcased cooperation and partnership between the two joint forces and was held in March 28-April 8 in the Philippines.

Soldiers shared information collected from the balloons to identify and mitigate potential threats and improve collective understanding of the operating environment during Balikatan, which means “shoulder-to-shoulder” in Tagalog. About 9,000 Air Force, Army, Marine and Navy personnel from the two nations participated in this year’s exercise along with 45 Australian special operators. (Pictured: Philippine and U.S. Soldiers prepare to launch a high-altitude balloon system at Fort Magsaysay in Central Luzon during Balikatan 2022.)

The use of balloons in military operations dates to the late 18th century. The French Committee of Public Safety established the Corps d’Aerostiers in 1794 to use hot-air balloons for reconnaissance during the French Revolutionary War, according to the U.S. National Park Service website. During the American Civil War from 1861 to 1865, balloons were used for surveillance and other military purposes such as directing artillery fire on enemy positions, the website said. Operators flew the balloons, which were usually tethered to the ground, to elevations of about 305 meters and used signal flags or telegraphs to relay information to forces below. The largest balloons, which held up to 906 cubic meters of hydrogen gas, could carry up to five people, the website said.

During Balikatan, Philippine and U.S. operators tested and trained with unmanned high-altitude balloons for similar purposes but at elevations of 15,000 to 21,000 meters above sea level, well above the operating altitudes of commercial airlines.

The flights demonstrated that the balloons could support maritime domain awareness and contribute to multidomain operations. The combined forces also launched the balloons from Central Luzon to rehearse presenting a targeting dilemma for a potential adversary.

Not only balloon technology but international flight safety and legal compliance also have come a long way since the French Revolution and American Civil War.

“As with any emerging capability, adherence to international rules and norms is critical to ensuring responsible, safe, and lawful operations,” explained Commander Tim Boyle, a Navy Judge Advocate and Chief of National Security Law at U.S. Indo-Pacific Command (USINDOPACOM).

The U.S. and its allies and partners continue to respect international rules and norms when conducting military operations across the Indo-Pacific.

The Armed Forces of the Philippines and USINDOPACOM ensured their cooperative use of the high-altitude balloons during Balikatan conformed to international law and standards governing navigational freedoms and safety of flight, given that balloons operated by military forces are state aircraft under international law and subject to the same requirements as other state aircraft.

USINDOPACOM coordinated extensively with Armed Forces of the Philippines authorities and air traffic control to ensure the safety of people on the ground and civil and military aircraft operating nearby. Before the exercise, U.S. Army Pacific received authorization from the Philippine government to operate the balloons in Philippine national airspace as required by international law and Philippine domestic law.

The U.S. has codified requirements under international law relating to airspace and the Convention on International Civil Aviation, known as the Chicago Convention, in U.S. domestic regulations. These requirements are also reflected in U.S. law, which prohibits foreign military aircraft from navigating within the U.S. unless authorized by the Secretary of State.