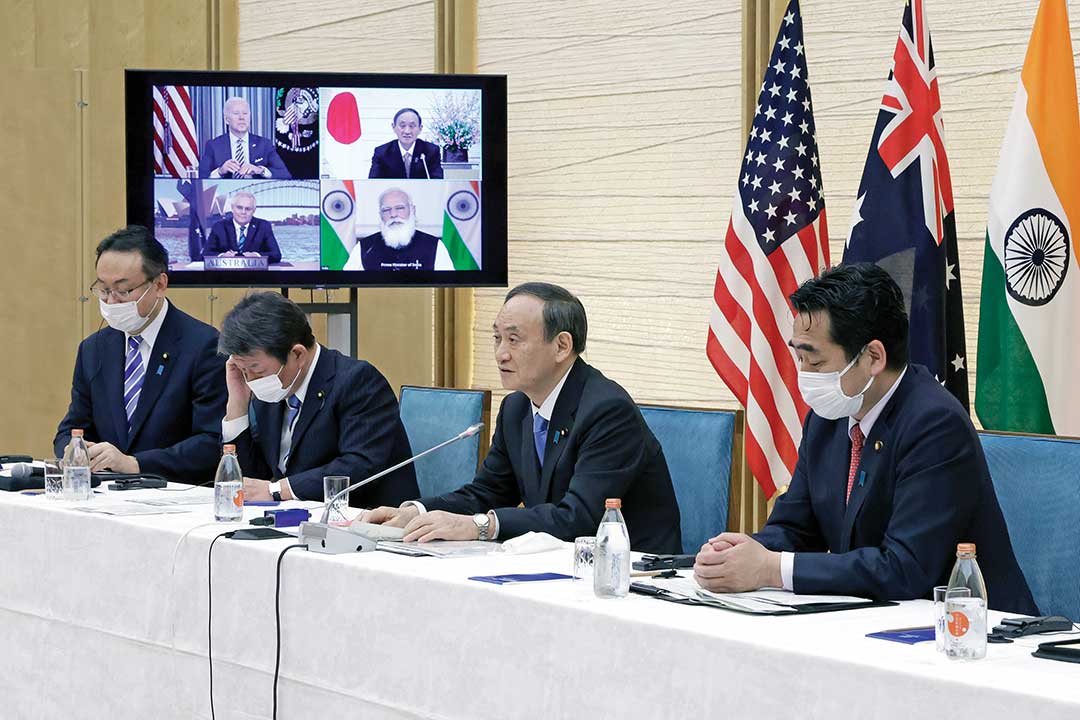 The Quadrilateral Security Dialogue (Quad) summit in March 2021 did not name the People’s Republic of China (PRC) directly, but Beijing seemed rattled by the event, with its mouthpiece, the Global Times newspaper, speculating that Quad members Australia, India, Japan and the United States were hyping the “China threat” even before the event. Apparently, China saw a major challenge to its dream of a China-centric Indo-Pacific in the Quad’s call for a free, open, inclusive and healthy region that is “anchored by democratic values and unconstrained by coercion.” The PRC’s hope that the four-country group hasn’t formed a cohesive force may need revisiting: Quad leaders attended a summit in September 2021 at the White House and have agreed to pursue important agendas through three focused working groups.

The Quad’s efforts expressed unanimity in the need for a free, open, rules-based order, rooted in international law to advance security and prosperity and to counter threats to the Indo-Pacific and beyond. But the agenda item that attracted global attention was the call for a collective response to the COVID-19 pandemic in terms of synergizing vaccination efforts, with India as a manufacturing hub and assisted by others, to roll out 1 billion vaccines by 2022. The other two working groups focused on emerging critical technologies and climate change.

The agenda seemed benign, but Beijing did not miss the connection in the Quad’s first summit to issues such as freedom of navigation and overflight and to concerns about “aggression” and “coercion” against Quad members by the PRC. No one called out China directly during the summit, but the PRC knows that it challenged the rules-based order by junking the Permanent Court of Arbitration’s 2016 ruling dismissing its expansive maritime claims in the South China Sea and that it continues to coerce Indo-Pacific nations. The Chinese response of calling the Quad meeting “selective multilateralism” and “COVID politics” shows its frustration with the emergence of an alternate global vaccination collaboration, something that China sought to unilaterally reserve for itself for profiteering.

The list of shared challenges to be addressed by the Quad includes cyberspace, counterterrorism, quality infrastructure investment, and humanitarian assistance and disaster relief (HADR), some of which entail alleged Chinese involvement, such as cyberattacks and the lack of transparency of the World Health Organization.

The Quad’s assertion to support the rule of law, freedom of navigation and overflight, democratic values and territorial integrity has added to the frustration of Beijing, which has started firing propaganda salvos through the Global Times newspaper, calling India a “negative asset” for groups such as BRICS (Brazil, Russia, India, China and South Africa) and the Shanghai Cooperation Organisation and saying that it fails to understand Chinese goodwill.

China wants the world to believe that there are wide divergences in four democracies getting together. As it evolves, however, the Quad seems to be getting over some of those differences. There is much more acceptability regarding divergent definitions and focus areas within the Indo-Pacific, with the Indian focus on the western Indian Ocean touching African and Gulf countries along with other areas of the Indo-Pacific, which remains the focus of all Quad members.

Foundational agreements signed by India and the U.S., such as the Communications Compatibility and Security Agreement and the Basic Exchange and Cooperation Agreement, as well as joint naval exercises, have improved the interoperability of India with other Quad members, operating within the NATO military-alliance framework.

India is the only Quad member that shares a land border with China, a source of tension for decades. The PRC has done its best to create apprehension among Quad members by keeping China-India relations fluctuating between tension and harmony. After military border standoffs at Doklam and Ladakh, it’s quite clear to Indians that China can’t be trusted, which has brought relative clarity to the Indian position. The economic entanglement of each Quad member with China necessitates a resilient supply chain, digital and technological ecosystem, with minimal dependence on China.

There has been consensus among Quad members regarding support for the Association of Southeast Asian Nations’ (ASEAN’s) centrality in the region, but its inclusion in the Quad’s considerations will be debated, given China’s influence over ASEAN. Generally, some ASEAN members have occasionally raised a feeble voice against Chinese aggression (the Philippines, Vietnam), expecting world powers to check Chinese adventurism because they find it difficult to stand up against China’s might by themselves. This has emboldened China to continue incremental encroachment in the South China Sea and the region. The PRC has always tried to deal with countries on bilateral terms, using its power to its advantage. In its individual engagements with Australia, India, Japan and the U.S., the PRC will continue to aim for weakening the Quad through bilateral concessions.

Will the Quad’s Evolution Continue?

The Quad emerged after the devastating tsunami in the Indian Ocean in 2004 as the Tsunami Core Group, which executed a credible HADR response. The series of multilateral Malabar naval exercises gave the group a sense of interoperability for anti-piracy, HADR and other maritime missions. The Quad members project themselves as committed to an open and transparent network that “will allow people, goods, capital and knowledge to flow freely.”

The Quad is yet to acknowledge that it has a role to play in checking Chinese adventurism in the Indo-Pacific or that it could ever operate as a joint military force. In fact, the Quad has chosen to be diplomatic in saying that it is not directed toward any particular country.

China’s incremental encroachment strategy in the South and East China seas and in Ladakh on the disputed India-China border is a serious concern not only to the countries directly affected by overlapping exclusive economic zones (EEZs) or unsettled borders but also to the rest of the world. The PRC continues to convert maritime features and atolls into military bases and expects other nations to accept them as islands, despite China’s improper application of the United Nations Convention on the Law of the Sea (UNCLOS) to claim 200 nautical miles of EEZ around the features, thus converting the South China Sea into a “Chinese lake” over a period of time.

The PRC’s encroachment threatens freedom of navigation and overflight along global sea lines of communication and may lead to restrictions such as the creation of an air defense identification zone in the South China Sea. Any such action by any country to restrict freedom of navigation and overflight or to violate the rule of law must be challenged in the U.N. Security Council, with the backing of the Quad.

Implementation of the vision of a Free and Open Indo-Pacific on a rules-based, legal framework is needed. All Quad members except the U.S. have ratified UNCLOS; hence, the U.S. needs to do the same to have the moral high ground. The PRC is reasonably confident that neither the U.S. nor any other country will use military force to dismantle its infrastructure in the South China Sea.

The PRC is also increasing its naval capability at an unprecedented pace. In this context, it is necessary for the Quad to strengthen itself beyond the Malabar exercises and to add teeth in the form of maritime capacity-building, further improvement of interoperability and increased capacity to dominate chokepoints sensitive to China. The Quad is not a military alliance, so it will need a formal structure and a secretariat to take it forward.

The Way Ahead for the Quad

COVID-19 vaccines will be manufactured in India and financed by Japan and the U.S. with logistical support from Australia. The intention of the Quad to synergize medical, scientific, financial, manufacturing, critical emerging technology and developmental capabilities in the future is a step in the right direction. The sharing of innovative technology and capacity building for climatic challenges will also serve the interest of humanity. If implemented, these measures will certainly make the Quad an effective grouping.

Quad members must continue freedom of navigation and military exercises in the Indo-Pacific, as China continues to do so. If the strategic situation worsens, there may be a need to position a so-called U.N. Maritime Military Observers Group to prevent an accidental triggering of conflict, which is possible in a region with a high density of combat ships on freedom of navigation missions.

The Quad summit did not signal expansion, but the group needs to have flexibility to incorporate like-minded democratic countries, as many would be keen to join the Quad because the Indo-Pacific is becoming the economic center of gravity and the manufacturing hub of the world. The support of other navies, such as those of France, Germany, the United Kingdom and other NATO members, would deter peace spoilers. The Quad in its present form may not be structured to check Chinese adventurism, but it certainly has the potential to become one of the most effective instruments to do so. Chinese reactions indicate that the Quad certainly has put China on notice, without even naming it.