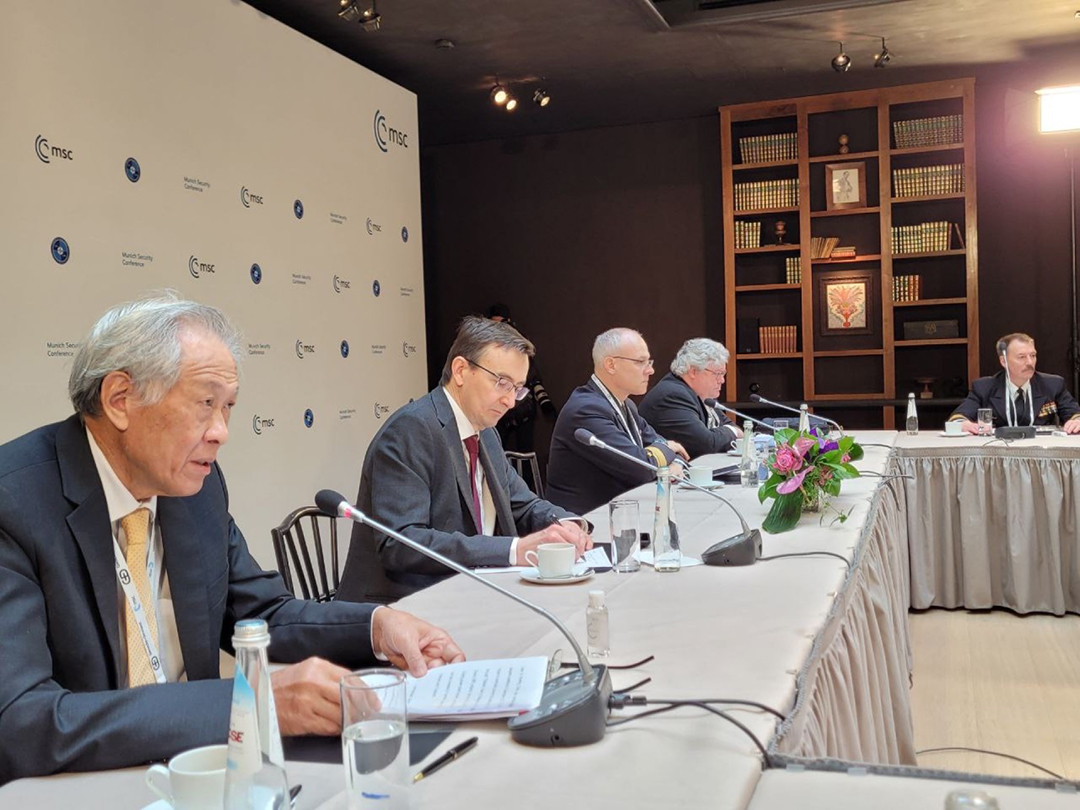 Inclusive military partnerships, multilateral agreements and international law are vital to maritime security cooperation in the Indo-Pacific, Singaporean Defence Minister Dr. Ng Eng Hen emphasized during the 58th Munich Security Conference in mid-February 2022. Ng also demonstrated the city-state’s commitment to partnership by engaging with defense officials and experts with interests in the region during the annual conference in Germany.

The event drew more than 30 heads of state, 100 government ministers and the leaders of several major multilateral organizations, including the European Union, NATO and the United Nations. During a roundtable discussion on maritime security, Ng noted that Singapore is located “at the crossroads of Asia and the rest of the world,” alongside the world’s second-busiest shipping lane and the globe’s largest fishery. (Pictured: Singaporean Defence Minister Dr. Ng Eng Hen, left, participates in the Munich Security Conference in February 2022.)

“For us, it is vital for stability that international laws like the United Nations Convention on the Law of the Sea [UNCLOS] are upheld,” he said. “Together with like-minded ASEAN [Association of Southeast Asian Nations] countries, we do our part such as in the Malacca Straits Patrol and support efforts like the Trilateral Cooperative Agreement [TCA] in the Sulu-Celebes seas to address common security threats like terrorism and piracy.”

UNCLOS, signed in 1982 and enacted in 1994, provides a legal foundation for marine and maritime operations globally. Among other provisions, it grants nations exclusive economic zones (EEZs) extending 200 nautical miles from their shores and sole rights to all natural resources within the EEZ.

The Malacca Straits Patrol is a series of cooperative measures adopted by Indonesia, Malaysia, Singapore and Thailand to protect the security of the strait, according to Singapore’s Defence Ministry. The TCA among Indonesia, Malaysia and the Philippines, signed in 2016, encourages standardization for maritime patrols and for rendering emergency assistance. It led to trilateral sea and air patrols beginning in 2017 and has been credited with bringing a sharp fall in the number of attacks on maritime vessels, according to Singapore’s ISEAS-Yusof Ishak Institute.

Ng credited military partnerships in the region with enabling cooperation on shared and pressing concerns. A key example, he said, is the Code for Unplanned Encounters at Sea, which provides guidelines for naval vessels of its 21 signatory nations to avoid and de-escalate incidents. He also cited facilities in Singapore serving the armed forces of ASEAN member states, such as the Information Fusion Centre, the Changi Regional Humanitarian Assistance and Disaster Relief Coordination Centre, and the Counter-Terrorism Information Facility.

“We are grateful for the partnerships and contributions of many countries in these initiatives,” he said.