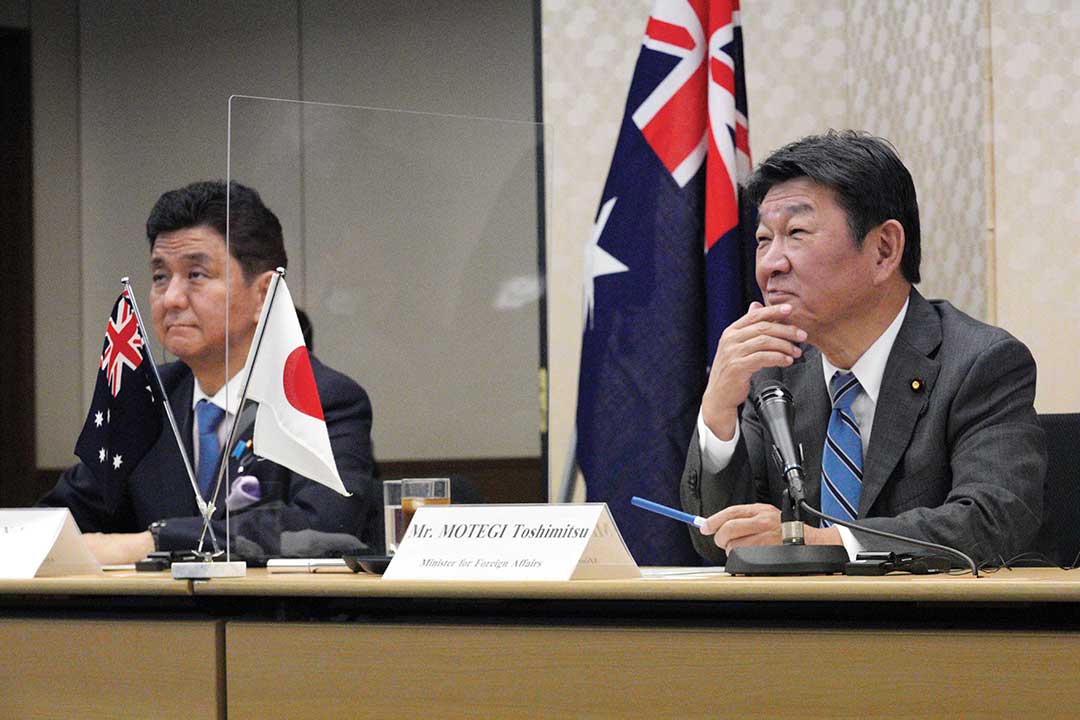 Foreign and defense ministers from the two countries agreed in June 2021 to strengthen their security ties as the PRC presses its claims to contested areas in the Indo-Pacific region.

Japanese Foreign Minister Toshimitsu Motegi, pictured at right, told reporters that the officials shared their concerns about Chinese activity in the East and South China seas as a challenge to the international community. Motegi was joined by Japanese Defense Minister Nobuo Kishi and their Australian counterparts, Marise Payne and Peter Dutton.

Japan and the PRC also disagree on the development of undersea resources in the area.

“We reinforce our strong opposition to any destabilizing or coercive unilateral actions that could alter the status quo and increase tension in the East China Sea,” Japan and Australia said in a statement released after the talks. The behavior “undermines the rules-based international order.”

In the South China Sea, the PRC’s sweeping maritime claims have clashed with those of its neighbors, which accuse Beijing of militarizing one of the world’s busiest sea lanes.

The joint statement expressed “serious concerns about the recent negative developments and serious incidents in the South China Sea, including continuing militarization of disputed features, dangerous use of coast guard vessels and ‘maritime militia,’ and efforts to disrupt other countries’ resources exploitation activities.”

“We reaffirmed our strong opposition to any unilateral attempts to change the status quo” by the PRC, Motegi said. He added that the four ministers shared “grave concern” over the PRC’s human rights abuses in Hong Kong and the western Xinjiang region, home to Uyghurs and other Muslim minorities.

The statement called on the PRC “to grant urgent, meaningful and unfettered access to Xinjiang for independent international observers including the U.N. [United Nations] high commissioner for human rights.”

The meeting also reaffirmed the importance of maintaining peace and stability in the Taiwan Strait, where the PRC has stepped up a campaign of pressure on the self-ruled island of Taiwan.  Reuters