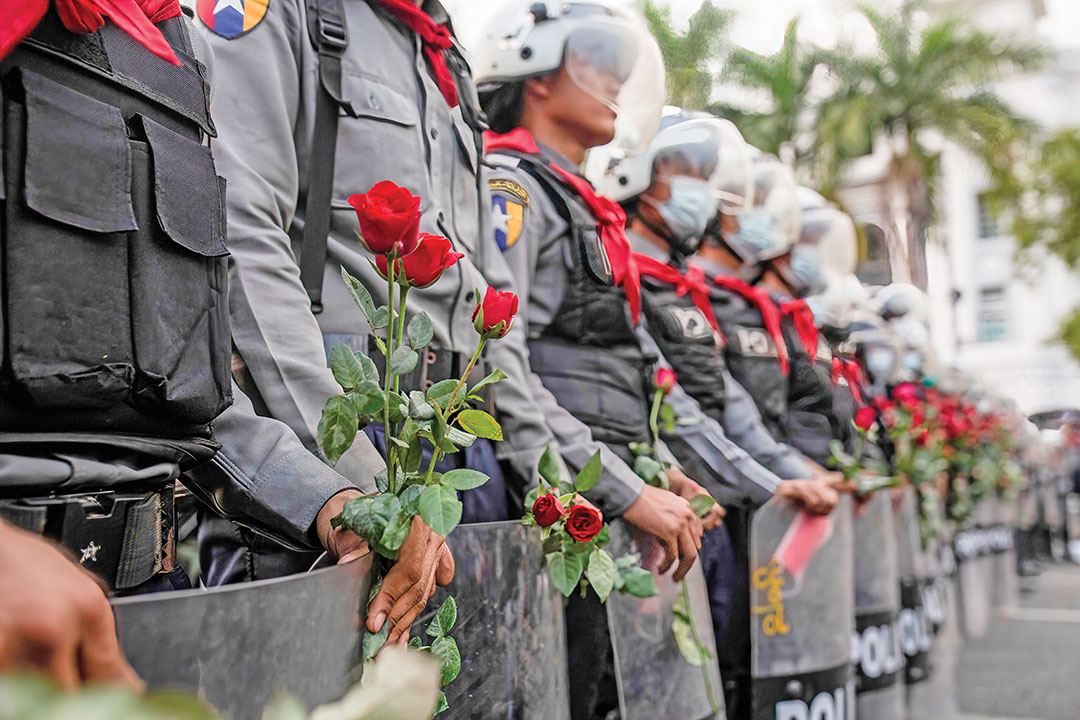 A growing stream of Myanmar (Burma) armed forces personnel are defecting in disgust over the military junta’s coup and ruthless crackdown on the nation’s people. As many as 800 Soldiers and officers from all components of the military, known as the Tatmadaw, had refused to participate in the brutal dictatorship as of mid-June 2021, with many joining the pro-democracy movement, according to one defecting officer.

“That’s about the size of five battalions in Myanmar’s military structure,” Army Capt. Lin Htet Aung told Radio Free Asia. “Some of them were from the army and many are from the navy, the air force, artillery units, the defense service factories, etc.” He is among those who have posted to a Facebook page called People’s Soldiers, which was created in mid-May to encourage defections and drew more than 25,000 followers within its first two weeks. “Changing sides is an important tactic for this revolution,” he said. “At first, we had hoped about 4,000 of the … military would change sides. But now we are expecting more than 4,000 will come to the aid of the people.”

The Tatmadaw is estimated to have about 350,000 members. Its leaders seized control of the Southeast Asian nation of 57 million people in February 2021, claiming that the November 2020 election won by Daw Aung San Suu Kyi’s party was fraudulent and jailing the deposed leader and other elected representatives. Four months into the coup, nearly 900 people had been killed by military and security forces, some of them from torture, according to the Association for Political Prisoners. Most of the victims were peaceful protesters and bystanders. Thousands of people had been detained, according to the activist group, and tens of thousands of citizens had been displaced from their homes across the country.

The world has reacted with outrage, with nations, including the United States, imposing sanctions against the Tatmadaw’s leaders and military-controlled entities and demanding the release of political prisoners and the return to power of the civilian government. The United Nations General Assembly in mid-June adopted a resolution calling for an arms embargo against Myanmar; the country’s two biggest weapons suppliers, China and Russia, abstained from the vote. “The international community needs to unify in its demand that the Tatmadaw cease the outrageous use of heavy artillery against civilians and civilian objects,” U.N. High Commissioner for Human Rights Michelle Bachelet said. “The military leadership is singularly responsible for this crisis and must be held to account.”

Despite the threat of reprisal against them and their families, defecting Myanmar military personnel are speaking out to oppose the junta’s bloody tactics and express support for the growing civil disobedience movement. “Instead of protecting the people after taking their taxes as salaries, this institution is committing all these atrocities, so I no longer want to be a part of it,” Army Lt. Htet Nay Bala told the Myanmar Now news service. “Everyone felt their future being taken away when the coup happened. As a youth who loves my country, I’ll continue with the revolution. There’s no turning back.”  FORUM Staff