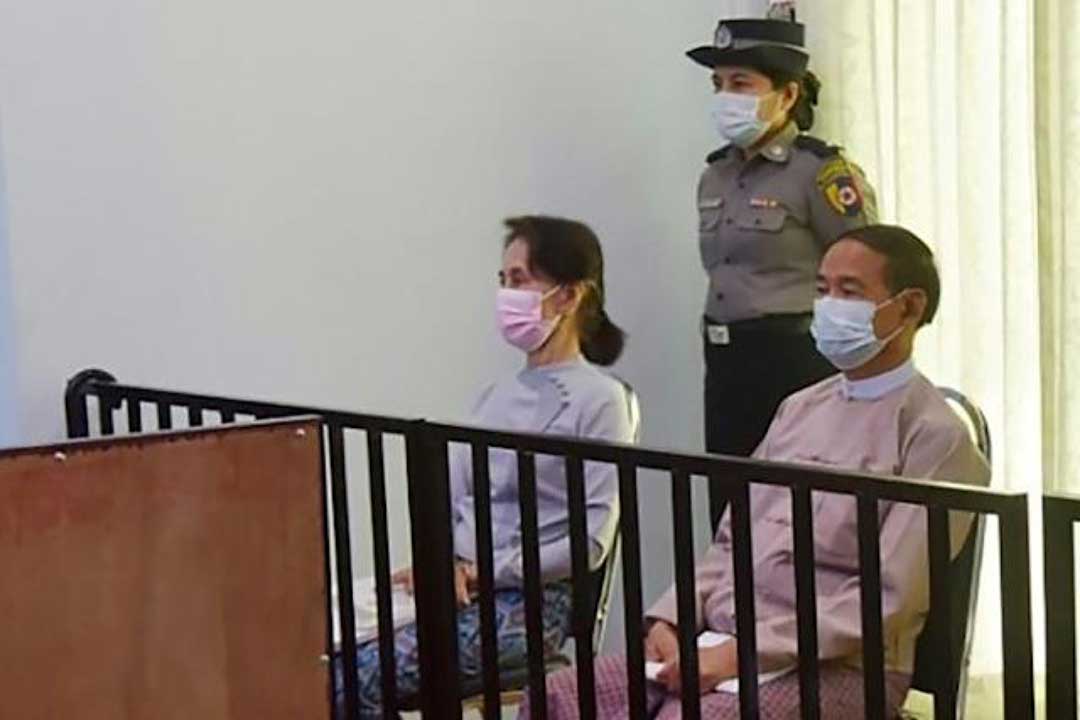 More than three-quarters of the members of Myanmar’s deposed National League for Democracy (NLD) arrested by the junta remain in detention more than 11 months after the military seized power, according to the party.

Since the February 1, 2021, coup, security forces have arrested 649 NLD members, including leader Aung San Suu Kyi and former President Win Myint, the party said in a statement in early January 2022. While some have been released, at least 489 are still in prisons throughout the country, the NLD said. (Pictured: Myanmar’s ousted leader Aung San Suu Kyi, left, and former President Win Myint attend a court hearing in Naypyitaw, Myanmar, in May 2021.)

NLD Central Committee member Kyaw Htwe said that while the party’s top leaders and Cabinet members were arrested on the day of the coup, several lawmakers and other party members were later detained.

“Most of the regular party members were later arrested under the pretext that they had taken part in anti-coup protests,” he said. “They were sent to interrogation camps, police detention centers and various prisons. Some are now under house arrest.”

The junta says voter fraud led to the NLD’s landslide victory in the country’s November 2020 election but has yet to provide evidence for its claims and has violently suppressed nationwide protests calling for a return to civilian rule, killing 1,398 people and arresting 8,376 since the coup, according to the Bangkok-based Assistance Association for Political Prisoners.

Junta spokesman Maj. Gen. Zaw Min Tun said the military is “not targeting the party” and does not intend to dissolve it ahead of a planned general election in 2023 — a vote the NLD has said will be rigged if it proceeds under military rule. The NLD has labeled the arrests of its party members “illegal” because they were carried out by an illegitimate regime.

“The Union Parliament has already said the arrests were illegal since the coup itself and [the military’s] actions are all illegal activities,” said Bo Oo, a member of the NLD’s Yangon Region Hluttaw.

According to the NLD, 92 members of Parliament remain in detention and at least one lawmaker died while in custody due to injuries suffered during an interrogation. It says as many as 14 party members were killed during interrogations and imprisonment.

The NLD also reported at least 86 cases of vandalism on party offices nationwide, including its headquarters in Yangon’s Bahan township.

One NLD member from Yangon, who spoke on condition of anonymity, said the ongoing crackdown against the party has prevented members from participating in political activities and forced many to flee.

“The junta’s main goal is to disband the party, so party members just need to be resilient,” he said. “As long as we are not arrested, we will continue to do what we need to do.”