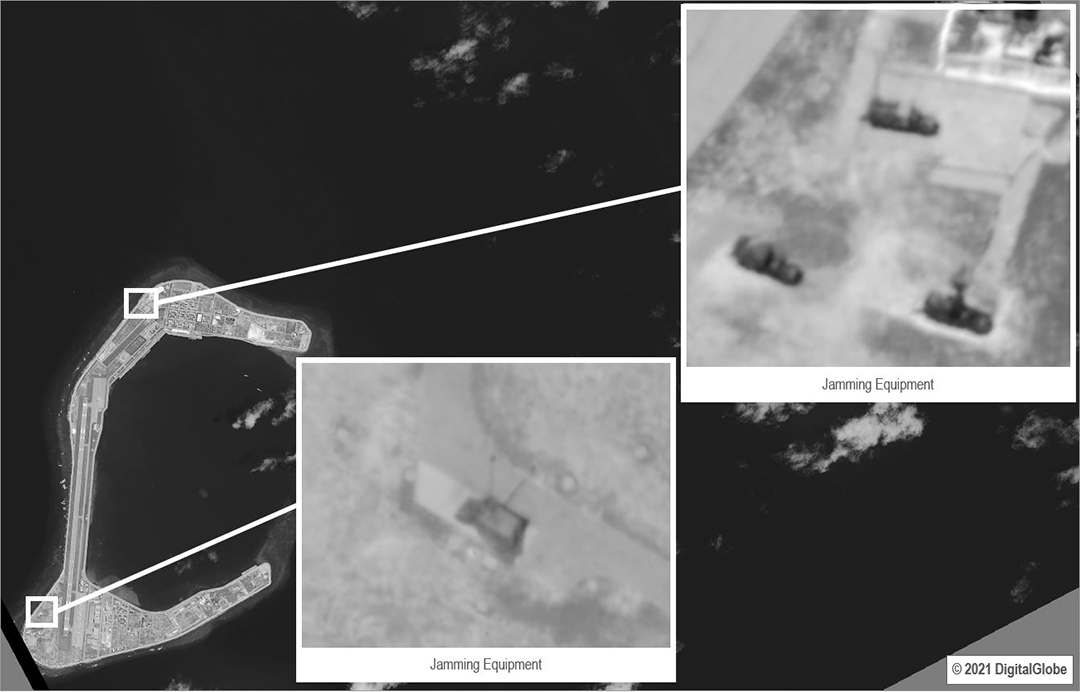 Documented use of electronic warfare in the battlespace predates World War I, but the prolific deployment of signal jamming and spoofing by the People’s Republic of China (PRC) has spilled beyond its borders and into areas of contention, threatening the safety of military, commercial and civilian air navigation and endangering military and commercial shipping.

“GNSS [Global Navigation Satellite System] trustworthiness is under increasing threat from natural signal interference, deliberate jamming, ‘spoofing,’ or interception,” according to an April 2021 report in The Maritime Executive. “The scale of this threat was highlighted by research in 2019 showing thousands of ships affected by shipping incidents around the busy port of Shanghai.”

Data showed that 300 ships had their GNSS locations replaced with fake coordinates in a single day, according to The Maritime Executive. One container ship’s GPS equipment, automatic identification system transponder and emergency distress signals were all affected, The Maritime Executive reported. “And its true position and speed were falsified without the user being alerted to the fact, illustrating the extent to which relying on PNT [position, navigation and timing] data without adequate integrity protection can form a single point of failures across all maritime navigational aids.”

GPS spoofing has proved to be more menacing than GPS jamming. When jamming occurs, signals sometimes alert navigators to an issue. Spoofing is more insidious and doesn’t provide clues that the GPS signal has been replicated and is providing incorrect location information, according to IFR magazine, a publication for accomplished pilots.

Definitive answers about who is responsible for the Shanghai spoofing incidents remain elusive, but analysts formed theories based on the locations and patterns of the incidents. “These ships could be unwilling test subjects for a sophisticated electronic warfare system, or collateral damage in a conflict between environmental criminals and the Chinese state that has already claimed dozens of ships and lives,” MIT Technology Review reported in November 2019. “But one thing is for certain: there is an invisible electronic war over the future of navigation in Shanghai, and GPS is losing.”

Heightening the already elevated risks is that GPS and PNT jammers are cheap, small and readily obtainable, making them easy to deploy by criminals — and even governments — around the world. “Despite the importance of GPS, the relative weakness of GPS signals [is] vulnerable to interference,” according to a report published by the Journal of Strategic Security, titled “The Global Positioning System and Military Jamming: The Geographies of Electronic Warfare.”

“This weakness provides a range of opportunities for criminals, terrorists and state actors using GPS jamming devices. Different types of jammers can cause varying degrees of interference, but the use of powerful military jammers [is] becoming more prevalent.”

“It is likely the kinds of disruptions seen in Russian and Chinese maritime regions are occurring elsewhere,” GPS World magazine reported in December 2019, although many are reluctant to report the incidents. “Yet, it is clear that thousands of vessels have been impacted in ways that must have been quite evident to their captains and crews.”

The Chinese Communist Party (CCP) has used GPS and signal jamming in contested areas such as the South China Sea. Information surfaced in 2018, for example, that the CCP had landed aircraft and moved electronic jamming equipment, surface-to-air missiles and anti-ship missile systems to new facilities on artificial features of the Spratly Islands in the South China Sea, according to an October 2021 report by the United States Congressional Research Service.

These CCP actions are in stark contrast to Chinese government statements, such as one its transport ministry made in October 2015 claiming that a lighthouse the PRC was constructing on an artificial feature in Subi Reef would “help China better perform international responsibilities and obligations in maritime search and rescue, prevention and elimination of natural disasters, marine environmental protection and navigation safety,” the online news magazine The Diplomat reported. In fact, electronic warfare vehicles have been captured in satellite imagery of Subi Reef, pictured.

Other intelligence previously revealed a suspected Chinese jammer system with its antenna extended on Mischief Reef, where the CCP has been building artificial features since 2014, according to The Wall Street Journal newspaper. CCP use of jamming and spoofing hinders a Free and Open Indo-Pacific.

While the potential for bad actors to use jamming exists, it’s important for militaries to train and understand how jamming and spoofing work. The U.S. military, for example, sometimes pauses GPS jamming activity when private pilots call for a “cease buzzer” so they can navigate safely.

GPS saves lives by preventing transportation accidents, assisting in search and rescue operations and hastening the delivery of emergency services. It also improves productivity through applications in farming, construction and package delivery. With pressures on the supply chain due to COVID-19, more commercial and cargo freights are relying on GPS for safe passage.

“Trustworthy precision navigation is more essential than ever, with shipping lanes increasingly squeezed by the growth in the size and volume of vessels at sea, the necessary expansion of offshore windfarms, sea space designated for environmental protection, and areas dedicated to ‘blue economy’ uses like aquaculture,” according to The Maritime Executive. “With global seaborne trade set to double by 2030, accurate and reliable PNT data will become even more pivotal to the safety, efficiency and reduced environmental impact of trade flows.”

The continued use of jamming and spoofing in China and Russia prompted a protest letter by 14 maritime organizations to the U.S. Coast Guard commandant requesting more awareness about the threat to navigation. The industry has also increasingly issued warnings.

“If nothing else, the GPS spoofing that has been occurring in Shanghai only further underscores that the manipulation of GPS connectivity is a very real threat,” according to TheDrive.com, “and is a wakeup call regarding just how rapidly GPS denial and spoofing tactics are evolving.”