Weaponizing the One Belt, One Road Scheme

Despite the People’s Republic of China (PRC) branding it as an economic and development initiative, the One Belt, One Road (OBOR) investment scheme is, in fact, the embodiment of a whole-of-government effort to develop the “close coordination between military struggle and political, diplomatic, economic, cultural and legal endeavors” that Chinese Communist Party (CCP) General Secretary Xi Jinping has called for to foster a strategic environment conducive to China’s rise.

Integrating the civilian and military sectors is a pillar of the CCP’s defense policy strategic framework. It allows China to obtain benefits from national defense resources in peacetime and from civilian infrastructure projects in the event of conflict.

Given that Xi has championed the “unified military-civil system of strategic capability,” it should come as little surprise that major components of OBOR infrastructure, including the port-park-city model, the digital silk road and the space information corridor, are designed with dual-use features that bolster a range of potential military and intelligence capabilities. 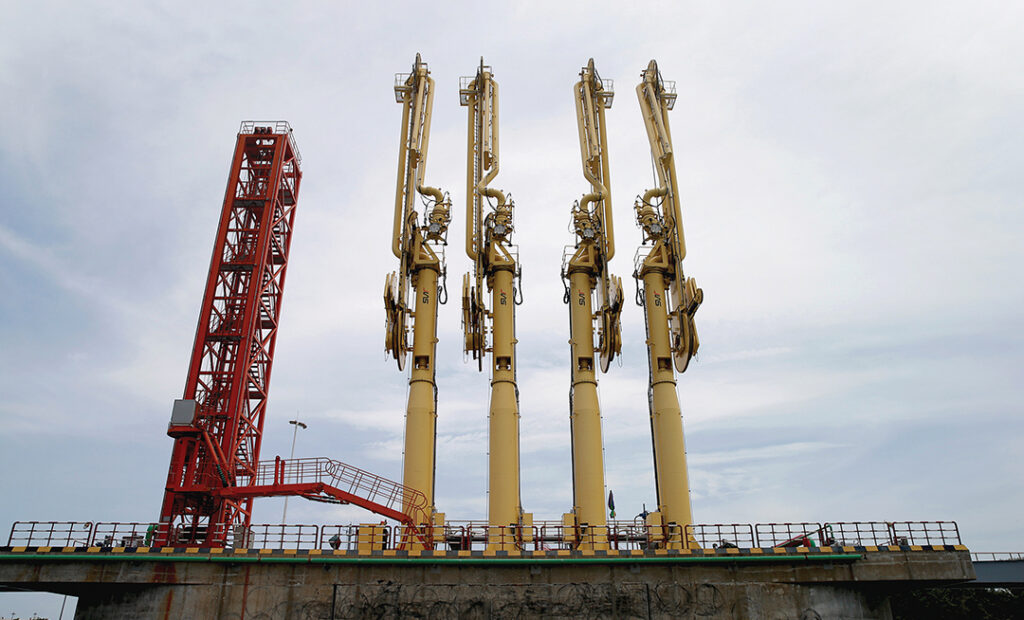 A Chinese port terminal on Made Island near Kyaukpyu, Burma, is a strategic strongpoint that bolsters the People’s Liberation Army’s ability to safeguard the Malacca Strait, a critical chokepoint, and offers valuable logistics support in the Indian Ocean. REUTERS

Beijing’s win-win rhetoric about the peaceful and benign nature of OBOR notwithstanding, a deliberate military and strategic functionality seems clearly entrenched in the program. The security challenge to United States or regional interests, however, does not lie in the risk of a string-of-pearls-type chain of overseas coastal fortifications from which the People’s Liberation Army (PLA) can wage war and that it will defend.

There is little evidence so far of the PRC constructing full-blown overseas military bases on the U.S. model, but there is abundant evidence that it is developing a network of strategic strongpoints that can significantly raise the costs of any U.S. military intervention and lower the willingness of OBOR host governments to offer the U.S. access or assistance.

This network, embedding the military within the civilian, harnesses financial, technological, trade and development tools in service of strategic and defense goals. It directly supports PLA power projection through enhanced operational, logistics and information network capabilities centered on OBOR platforms. It aims at creating an environment conducive to CCP interests and inhospitable to those of the U.S.

The gains to the PRC from OBOR-related leverage come largely at U.S. expense. They are, as a former U.S. defense official put it, “a suite of capabilities that are intended, clearly … to defeat American … power projection.”

China’s technological exports under the digital silk road and widespread adoption of the Beidou satellite network are important components of this suite of capabilities. When Chinese technologies such as fiber-optic cables and 5G networks are baked into OBOR packages, host states’ de facto reliance on Chinese companies increases exponentially. In addition to promoting digital governance with Chinese characteristics, the spread of Chinese technology, particularly tools for surveillance and repression, favors authoritarian regimes — governments with which Washington is more likely to clash over undemocratic behavior.

Not only does this disadvantage the U.S. and its companies as well as its allies and partners, it also strengthens the PRC’s ability to seize and cement advantages by setting the standards for next-generation technology. Thus far, U.S. countermeasures such as the Digital Connectivity and Cybersecurity Partnership announced in 2018 with a modest U.S. $25 million budget are woefully inadequate.

The nascent trend seems to be toward an increasingly Chinese-dominated political, economic, technological and strategic ecosystem in the Indo-Pacific. If there is a challenge posed by OBOR for the U.S., it lies not in enhanced PLA capabilities per se, but in the CCP’s enhanced ability to project its sovereignty, rules or undue influence based on a unilateral assertion of core interests. The exercise of this power will challenge the U.S.-led open, rules-based international order. 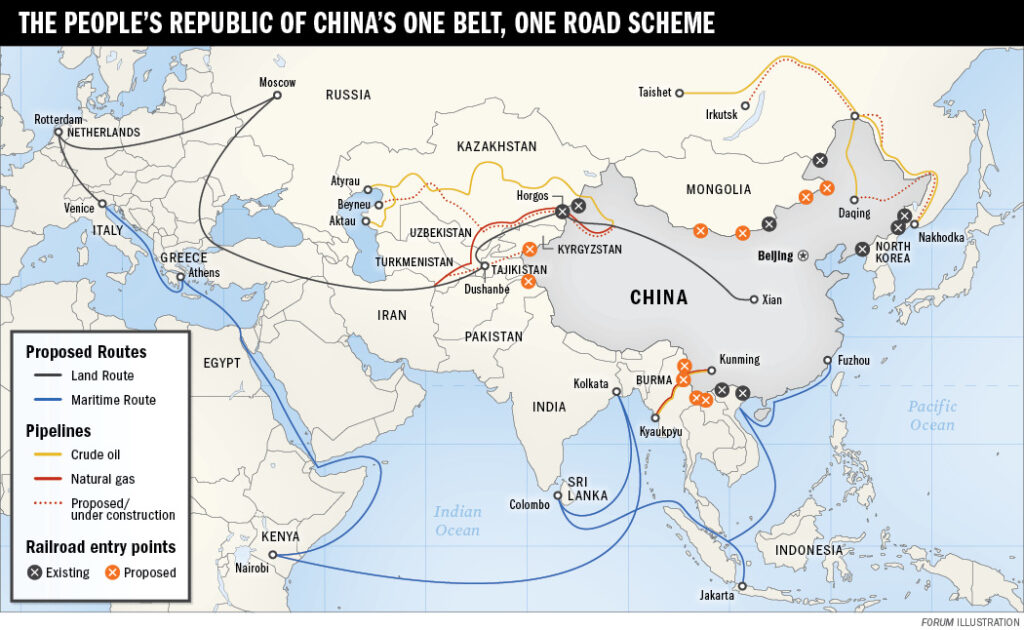 Should the PRC be successful in leveraging OBOR for preeminence in the Indo-Pacific, the U.S. role as the guarantor of regional peace and stability would be undermined. Movement toward a Sino-centric regional ecosystem represents a fundamental change in the regional balance of power between the PRC and the U.S.; there have been echoes of a “sphere of influence” strategy in Xi’s public statements calling for “Asia for Asians.” It is implicit in his pledge to build a “new architecture of regional security cooperation that reflects Asian needs.”

The PRC’s creation of regional multilateral fora that exclude the U.S. indicates that it is laying the foundation for a more China-centric regional security and economic order. This, in turn, would have significant implications for the international rules-based order.

It is by no means a foregone conclusion that this nascent ecosystem underpinned by OBOR will ultimately be realized. It is true that U.S. policies and diminished diplomatic engagement in the region over the past several years have not aided the U.S. cause. Yet, the CCP confronts a range of countervailing forces that could derail its plans. The CCP is not offering a global vision that other countries seem eager to embrace. The PRC’s double-digit growth has steadily slowed, and the aftereffects of the COVID-19 pandemic reduce the resources that the CCP can bring to bear.

The PRC’s economic conditions are vastly different today than in OBOR’s first five years, making unclear how financially and politically feasible it will be for the CCP to pump massive capital into the plan. OBOR projects have rarely proven commercially profitable, and the global economy, ravaged by the pandemic, exacerbates this problem.

Despite the drums of increasing military-civilian fusion, developers in some cases have either not followed plans or cut corners in port construction, resulting in maritime assets that may not meet PLA standards. Some OBOR projects have been halted or scrapped, and others will languish on the drawing board as host countries retrench financially.

Many OBOR host states are unable to service their existing debts to the PRC, presenting the Chinese government with an unpalatable choice between the expensive options of debt forgiveness or restructuring at a time when the PRC’s economy is distressed versus pressing for repayment or another form of compensation — risking criticism for “debt-trap diplomacy” and local backlash.

While the PRC has gone along with a G-20 moratorium on debt service payments by the world’s poorest countries, mostly in Africa, it does not have a similar policy on OBOR debt. Pakistan, which has already requested relief on U.S. $30 billion in loans, is a high-risk borrower, according to an Organisation for Economic Co-operation and Development classification.

So, too, are other major OBOR host countries such as Bangladesh, Laos and Sri Lanka. Chinese officials, acknowledging that debt relief is not simple, have ruled it out for preferential loans made by China’s Export-Import Bank, which has financed more than 1,800 OBOR projects worth an estimated U.S. $149 billion.

Other officials have cautioned that “OBOR loans are not foreign aid” and made clear that the PRC expects to recoup its principal plus at least modest interest. 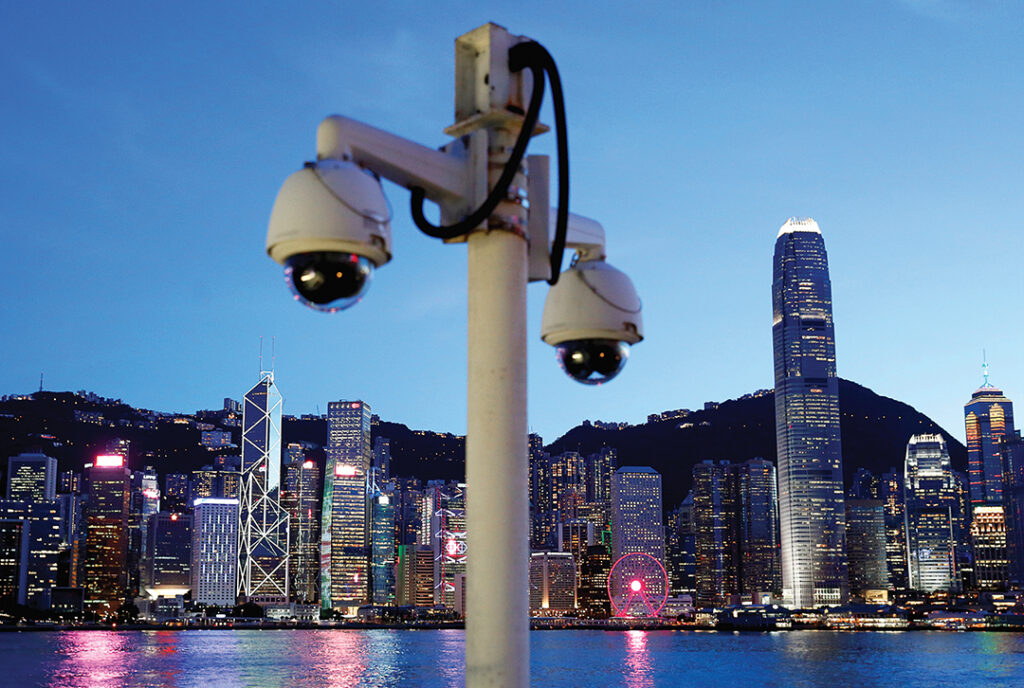 As part of its One Belt, One Road scheme, the People’s Republic of China seeks to export its smart cities and smart ports programs, whose networked cameras, pictured in Hong Kong, sensors and location services can be used for legitimate policing or for repression. REUTERS

The PRC’s OBOR projects have long sparked concerns in host countries over issues ranging from corruption and land grabs to environmental damage and worker rights and safety. Assertive Chinese government behavior toward neighbors over territorial disputes has generated mistrust and resentment in the region.

Heavy-handed wolf warrior diplomacy has undercut the PRC’s claim to be a benevolent and peaceful rising power. Exploitative behavior by Chinese companies in Africa has fueled resentment and, in some cases, a violent backlash against Chinese workers. It stands to reason, therefore, that a hard push by the CCP on debt repayment by cash-strapped states in a global recession caused by a pandemic that originated in China is unlikely to sit well with partner countries and could undermine the PRC’s image and strategy.

Criticism of OBOR emanates not only from project hosts and concerned states but also more frequently from the Chinese population itself. As the PRC’s economy suffers and its population feels the pinch from the U.S.-China trade war and the fallout from COVID-19, Chinese citizens have increasingly taken to the internet to voice displeasure at these loss-making grand projects.

Chinese academics, economists and businesspeople have argued that the resources being dedicated to OBOR could be put to better use at home. Whether the PRC can effectively “weaponize” OBOR by creating a Sino-centric ecosystem of trade, technology, finance and strategic strongpoints — undermining U.S. influence and its role as a security guarantor — will be a function of CCP choices — and those made in Washington as well.

The ability of the U.S. to serve as an active and credible partner across multiple sectors and regions seems a necessary precondition for OBOR target countries to resist the Chinese carrots-and-sticks strategy. It will also be a function of the ability of like-minded Indo-Pacific states, including Australia, India, Japan and Association of Southeast Asian Nations members, to contribute and provide practical alternatives to what the PRC is offering.

This article is excerpted from the Asia Society Policy Institute’s report “Weaponizing the Belt and Road Initiative,” published in September 2020. It was edited to fit FORUM’s format.