Speaking Up For Sovereignty

Persistent aggressive behavior by the People’s Republic of China (PRC) in the South China Sea is galvanizing Southeast Asian nations to defend their maritime sovereignty, other rights and freedom of navigation. Although confronting an economically powerful neighbor requires a careful balancing act, nations that ring the South China Sea have been shoring up maritime defenses, speaking out against aggression and defending their territorial waters.

Vietnam, which chaired the Association of Southeast Asian Nations (ASEAN) in 2020, rallied the defense ministers of member nations in a December 2020 declaration that called for the region to “exercise self-restraint in the conduct of activities and avoid actions that may further complicate the situation, and pursue peaceful resolution of disputes, without coercion, in accordance with international law.”

The 10 ASEAN members as well as the PRC and the United States agreed to the declaration. It did not mention the South China Sea. Vietnam took the message a step further, however, with a news release that said the ministers agreed “to use peaceful means and abide by the international law to settle divergent issues, especially the issues related to disputes over territory and sovereignty, including disputes in the South China Sea.”

In an era in which the PRC is militarizing artificial features in the South China Sea, illegally fishing in other countries’ territorial waters and exclusive economic zones (EEZs) pressuring neighbors not to extract natural resources, the unspoken target of the message was clear. For Vietnam, defending its natural resources and territorial waters is an act of survival, one expert said. “The South China Sea is almost an existential issue for Vietnam,” Derek Grossman, a senior defense analyst for the Rand Corp.,  told FORUM. 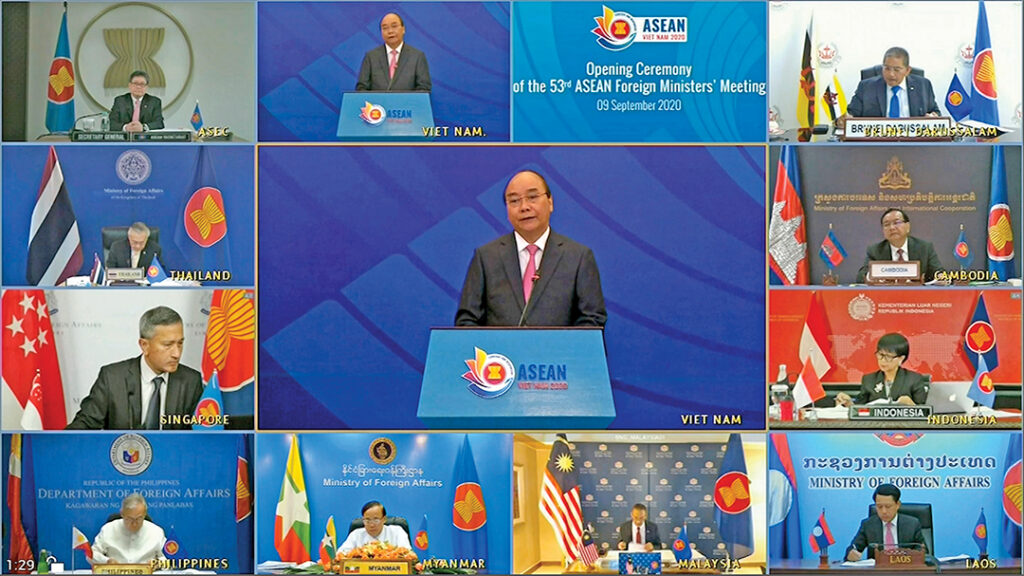 Pushing back against its larger neighbor, however, is difficult for Vietnam. “On one hand, China is certainly an adversary of Vietnam in the South China Sea,” Grossman said. “Vietnam is also very suspicious of the One Belt, One Road [infrastructure scheme] and the damming of the Mekong River and how that affects Vietnam in the lower Mekong Delta.”

Yet, the PRC is what Vietnam refers to as a comprehensive strategic cooperative partner, which is the highest distinction it gives a foreign country. The PRC is also Vietnam’s No. 1 trading partner. “They realize that China isn’t going anywhere in the region,” Grossman said. “It’s a careful balancing act that Vietnam needs to play.”

Vietnam has quietly endorsed the U.S. strategy of a Free and Open Indo-Pacific because it takes a hard line against Chinese aggression in the South China Sea “and suggests Washington’s intent to sustain a presence in the region for years to come,” Grossman wrote in a January 2021 article for the online news magazine The Diplomat.

Chinese interference with Vietnam’s oil exploration in the South China Sea has already exacted a financial toll. Vietnam paid a total of U.S. $1 billion to two international oil companies after canceling their South China Sea projects due to pressure from the PRC, The Diplomat reported in July 2020.

Vietnam’s state-owned energy company, PetroVietnam, was expected to pay Repsol of Spain and Mubadala of the United Arab Emirates. Two of Repsol’s development prospects were at the edge of Vietnam’s EEZ but within the legally unfounded nine-dash line claimed by Beijing. Vietnam’s decision to cancel the contract came after the PRC assembled 40 naval ships off the coast of Hainan island, which is a two-day voyage from the drilling site.

Vietnam has not lost its desire to extract resources within its EEZ, however. It is working with the Japanese energy firm Inpex on a deal to drill in offshore fields. The move will surely be contested by the PRC, the South China Morning Post newspaper reported in January 2021.

An official with PetroVietnam, who declined to be named, told the newspaper he believed that drilling would begin in 2021. “We have calculated the reaction from China, but we have not done anything wrong. We will just drill within our exclusive economic zone,” he said.

Malaysia is also speaking up to defend its maritime rights. The country’s foreign minister announced in August 2020 that Malaysia had submitted a document to the United Nations to clarify its rights over the remaining portion of the continental shelf beyond 200 nautical miles from the country’s baselines, Minister of Foreign Affairs Hishammuddin Hussein told Parliament in August 2020, Bloomberg reported.

“Malaysia opposes China’s claim that they have historic rights over those waters,” Hishammuddin said. “The Malaysian government also considers China’s claims over maritime features in the South China Sea to have no basis whatsoever under international law.” The rebuke was an unusual move by Malaysia, which had avoided criticizing the PRC by directing its comments toward ensuring that the waterways remain open for trade, Bloomberg reported. 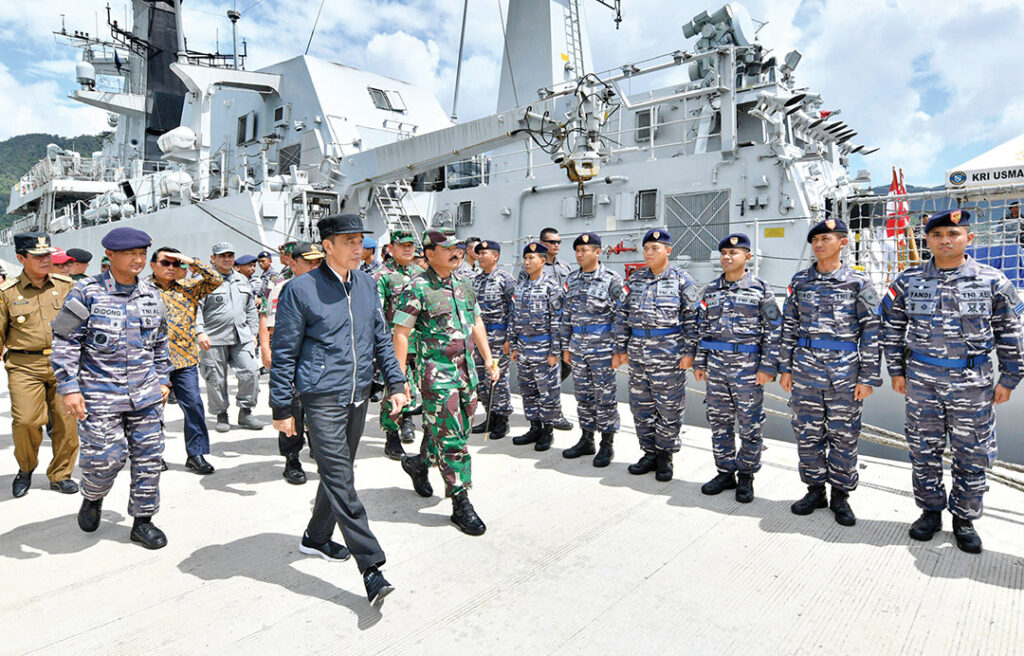 The PRC has constructed military bases and outposts on reefs, rock formations and shoals and claims it has rights to almost 80% of the South China Sea. Brunei, Malaysia, the Philippines, Taiwan and Vietnam claim parts of the same area. An international tribunal in 2016 rejected most of the PRC’s extensive claims as inconsistent with international law.

Although Malaysia’s economy remains tightly connected to the PRC, it is working with defense partners to defend its maritime interests. It is one of four Indo-Pacific militaries that will receive unmanned aerial vehicles (UAVs) from the United States to patrol and conduct reconnaissance over the South China Sea. Malaysia received six ScanEagles in May 2020 and will eventually receive a total of 12, while Indonesia and the Philippines will receive eight apiece. Vietnam is scheduled to receive six. All recipients said they will use the UAVs to support maritime security in the South China Sea.

The U.S. is fully funding the program at a cost of about U.S. $1.4 million per vehicle. Delivery of the six remaining UAVs to Malaysia and the 22 bound for the other countries is expected by 2022.

When Indonesia’s Maritime Security Agency intercepted a Chinese survey ship in its EEZ in January 2021, it was merely the latest encounter in a string of conflicts with Chinese vessels over the past few years. The Xiang Yang Hong 03 had turned off its tracking system, so Indonesian government vessels escorted it out of Indonesia’s EEZ, Radio Free Asia (RFA) reported.

“If they had sailed continuously without carrying out suspicious activities, it wouldn’t have been a violation. But during this voyage, their AIS [automatic identification system] was turned off, and this raised suspicion,” First Adm. Suwito, director of operations for Indonesia’s Maritime Security Agency, told reporters. “We asked why the AIS was turned off, and their answer was that it was broken.”

Indonesia has had multiple standoffs with the PRC over allegations that Chinese fishing boats, escorted by Chinese coast guard ships, operated in its EEZ off the Natuna Islands. The Indonesian Coast Guard has been hardening its defenses as the conflicts persist. In early January 2021, Indonesia acquired 20 submachine guns for 10 patrol boats, RFA reported. In addition to the 12.7 mm guns, the Coast Guard has also received approval from the Ministry of Defense to purchase 30 mm submachine gun systems for shipboard defense.

Southeast Asian nations also rely on international defense partners to enforce the sovereignty of their maritime domains. In April 2020, the Australian warship HMAS Parramatta conducted exercises with the U.S. Navy in disputed waters of the South China Sea. The U.S. Navy sent three of its warships to the South China Sea “in support of security and stability in the Indo-Pacific region.”

The deployment occurred during a period of heightened tensions. Only days before, the PRC had set up administrative bodies on islands in the South China Sea and had a month earlier launched two new research stations on artificial reefs in territory claimed by the Philippines and others.

In the context of those controversial actions, nations in the region welcomed the stinging condemnation in July 2020 of the PRC’s maritime claims by then-U.S. Secretary of State Mike Pompeo, Grossman said.

“The world will not allow Beijing to treat the South China Sea as its maritime empire,” Pompeo said in the statement. Newly confirmed U.S. Secretary of State Antony Blinken voiced a consistent stance when he spoke with Philippine Foreign Minister Teodoro Locsin in late January 2021. “Secretary Blinken pledged to stand with Southeast Asian claimants in the face of PRC pressure,” the U.S. Department of State said in a news release.

South China Sea nations engaged in maritime disputes with the PRC appreciated the support, defense analyst Grossman said. In the case of Vietnam, the country “probably felt just more confident that the U.S. planned to support Hanoi in defending Spratly Island claims within its EEZ. Significantly, Washington specifically highlighted Vanguard Bank — the scene of the last major China-Vietnam standoff in 2019 — as indisputably part of Vietnam’s EEZ,” Grossman wrote in The Diplomat.

Grossman told FORUM that Vietnam would like to see a long-term engagement from the U.S. in the South China Sea and that leaders were pleased with the statements by U.S. leaders. “Even though Vietnam could not vocalize its ecstatic response to Pompeo’s announcement, it’s clear Vietnam was privately happy about that,” Grossman said.

The strategy of a Free and Open Indo-Pacific requires allies and partners to work together to keep international sea lanes open and territorial waters protected, he said. “I think that’s the U.S. hope, and the Free and Open Indo-Pacific strategy lays that out. The U.S. wants like-minded partners who are also facing Chinese assertiveness in the South China Sea. That’s where the rubber meets the road.”