The People’s Republic of China has ambition, but does it have the money?

The newly installed Chinese Communist Party chief, Xi Jinping, visited Central Asia in September 2013 to attend the annual summit of the Shanghai Cooperation Organization, a political, economic and security alliance that at the time included Kazakhstan, Kyrgyzstan, the People’s Republic of China (PRC), Russia, Tajikistan and Uzbekistan. Along the way, he dropped in at Nazarbayev University in Kazakhstan, the eponymous university founded by Kazakh strongman Nursultan Nazarbayev. There, Xi gave the kind of speech that will be familiar to anyone who has attended such events in the post-Cold War world, emphasizing that youth are the future, people-to-people ties will preserve global peace and what the world needs now is win-win cooperation. To these second-world shibboleths, Xi added a principle that is obligatory when speaking in Central Asia: a call for the revival of the ancient Silk Road.

“Silk Road” wasn’t even in the title of the speech, which the Chinese Ministry of Foreign Affairs still calls the “Promote Friendship Between Our People and Work Together to Build a Bright Future” speech. It also wasn’t the first New Silk Road. Then-U.S. Secretary of State Hillary Clinton launched a U.S. New Silk Road infrastructure strategy in July 2011 with the support of U.S. Army Gen. David Petraeus and U.S. Central Command.

The PRC’s New Silk Road caught the imagination of academics and the media, however, prompting Xi and his Foreign Ministry to transform a platitude into a pronouncement. When Xi traveled to Jakarta, Indonesia, in October 2013 to give a speech to the Indonesian parliament, the Silk Road took center stage. China would have not just one Silk Road but two: the Silk Road Economic Belt across Central Asia and the 21st Century Maritime Silk Road to Southeast Asia, the Indian Ocean, the Middle East and East Africa. 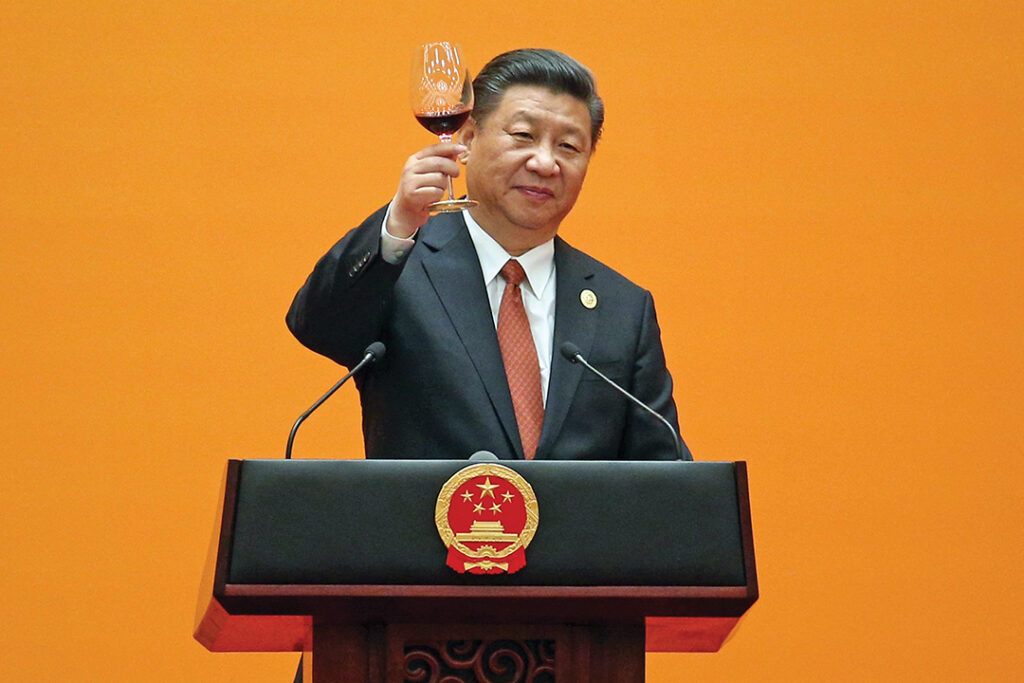 Chinese Communist Party General Secretary Xi Jinping makes a toast during a welcome banquet for the Belt and Road Forum at the Great Hall of the People in Beijing in May 2017.

The terrestrial “belt” caught the world’s imagination, but the maritime “road” attracted far more of the PRC’s diplomatic, financial and military resources. In fact, the land route between Europe and China is wildly uneconomical, but the sea lanes connecting China to Singapore, Australia, the Persian Gulf, the Suez Canal and Western Europe are crucial for the PRC’s survival as a trading nation. Were the route around the bottom of Eurasia ever to be shut down, the United States economy would endure. The PRC’s would be strangled to death.

Thus, it should come as no surprise that as reform-era China has been transformed from a continental empire into a trading nation, it should seek command of the seas through which its imports and exports flow. The PRC’s ambition is to secure its trade against interference from the U.S., but intelligent Chinese theorists understand that to be a 22nd century ambition. In the meantime, the PRC could face many other potential threats: an Indian blockade, a conflagration at the Strait of Hormuz or even a closure of the Suez Canal. Chinese-sponsored development projects in South Asia and East Africa have given the country more reasons to prepare for potential military intervention across the region. Although the People’s Liberation Army (PLA) Navy is still far from being able to challenge the U.S. Navy globally, it might hope to interfere with U.S. operations, particularly through submarine warfare.

The PRC certainly has the motive to militarize the Maritime Silk Road, and its promises of extravagant no-strings-attached foreign aid to governments in the region give it the opportunity. However, what about the means? Will the PRC really be able to develop the naval forces needed to project power into the Indian Ocean and beyond? Perhaps more important, can it afford to?

Based on ambitions and announcements, the answer to both questions would seem to be yes. The PRC has two aircraft carriers and another under construction. Its third carrier will feature electric, integrated power system propulsion of the type used on the U.S. Navy’s advanced Zumwalt-class destroyers. Its fourth will be nuclear-powered, featuring an electromagnetic launch system, fifth-generation stealth fighter planes and a railgun. Each of the PRC’s aircraft carriers will be surrounded by a full battle group, complete with destroyer escorts, attack submarines and support ships. At least, that’s the ambition.

The reality of the PLA Navy is much more mundane. It possesses a former Soviet converted cruiser (the Liaoning), which is essentially a training ship, an indigenous copy (the Shandong), which spends its time sailing between the East and South China seas, and an underpowered air wing that can only take off from carrier flight decks by shedding fuel and armaments. The PRC suffers from a chronic lack of aerial refueling capacity, which limits Chinese carrier-based aircraft to operations within a narrow radius of their home ships. Future generations of carriers and aircraft may solve these problems, but news reports suggest that the PRC has already decided to scale back its third and fourth carriers from electric and nuclear power, respectively, to steam propulsion. Plans for the fifth and sixth carriers have reportedly been scrapped. 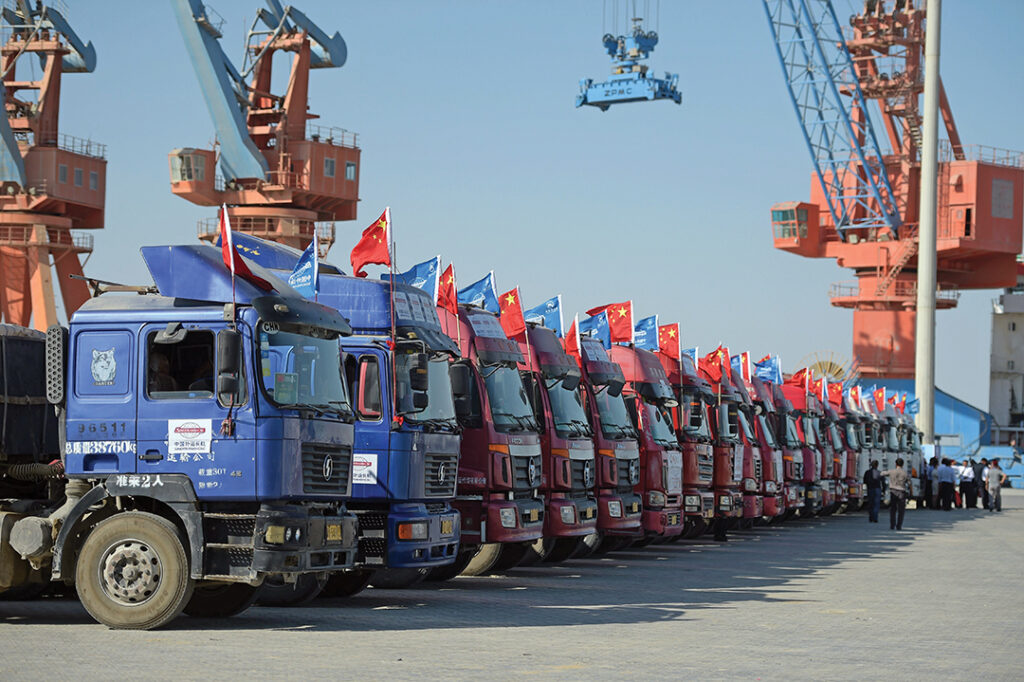 Although the PRC’s military ambitions remain undiminished, its fiscal resources have become increasingly constrained. Government budget figures, while suspect, are perhaps indicative. Throughout China’s period of rapid growth from 1980-2015, the consolidated (central and local) government budgets tended to show a deficit, but revenue growth was so rapid that each year’s spending levels were eclipsed by the next year’s tax receipts. For example, the PRC’s 2015 outlays of 15.2 trillion yuan (U.S. $2.34 trillion) outstripped its 2015 revenues of 14 trillion yuan (U.S. $2.15 trillion) but were themselves covered by China’s 2016 revenues of 16 trillion yuan (U.S. $2.46 trillion). Double-digit revenue growth meant that all budget constraints were soft, since China’s leaders knew that the money to pay for today’s promises would be available soon, if not tomorrow.

All of that changed after 2016, when spending continued to increase but revenue started to level off. Annual revenue growth, which used to average about 20%, has recently fallen into the low single digits if official figures are to be believed. All of this was before the coronavirus pandemic. Given that aircraft carriers and their air wings and associated battle groups are some of the biggest defense expenditures, it should come as no surprise that the Chinese government might seek to economize. Even if the PRC can master the technical challenges of developing nuclear aircraft carriers, it may blanch at the expense of building them, never mind equipping them.

It’s the same story with the PRC’s much-hyped “string of pearls” around the Indian Ocean. There is no doubt that the PRC has the strategic ambition to ring the region with naval, air and electronic warfare bases. It has already spent vast sums militarizing the South China Sea, building artificial islands on which it has installed harbors, runways and radars. The South China Sea, however, is close to home, and the land acquisition cost for these bases was nil (the land creation costs are another matter entirely). Overseas bases in sovereign countries are potentially much more costly.

Consider China’s only major overseas military base, in Djibouti. Nominally, this East African base cost the PRC about U.S. $20 million a year to lease the land, plus construction costs. This seems to compare favorably with the U.S. lease terms of U.S. $63 million a year for a much larger footprint. For the U.S., the contract terms represent the full cost: Countries such as Djibouti value U.S. bases for the implicit security guarantee they provide. The PRC, by contrast, must pay countries much more to persuade them to allow a Chinese military presence. In the case of Djibouti, that includes U.S. $590 million for a port, U.S. $490 million for a railway and U.S. $450 million for an airport.

It’s the same story in Pakistan, where the China-sponsored Gwadar Port project lacks any real commercial rationale. Reportedly priced at over U.S. $1 billion, it’s unclear how much the PRC has actually spent on Gwadar. When and if it is finished, the port may become a refueling point for Chinese naval vessels or a base for Chinese marines. Whatever use the PRC finds for Gwadar, it certainly won’t justify the cost. The same might be said for the underused Hambantota port in Sri Lanka and the prospective Kyaukpyu port in Burma, each with a price tag upward of U.S. $1 billion. Taken together, these three Indian Ocean pearls cost the PRC more than U.S. $3 billion before a single PLA Navy ship has had the chance to use them. Yet instead of resolutely pushing forward to future development phases, the PRC is in all three cases demanding additional contributions from the host countries. 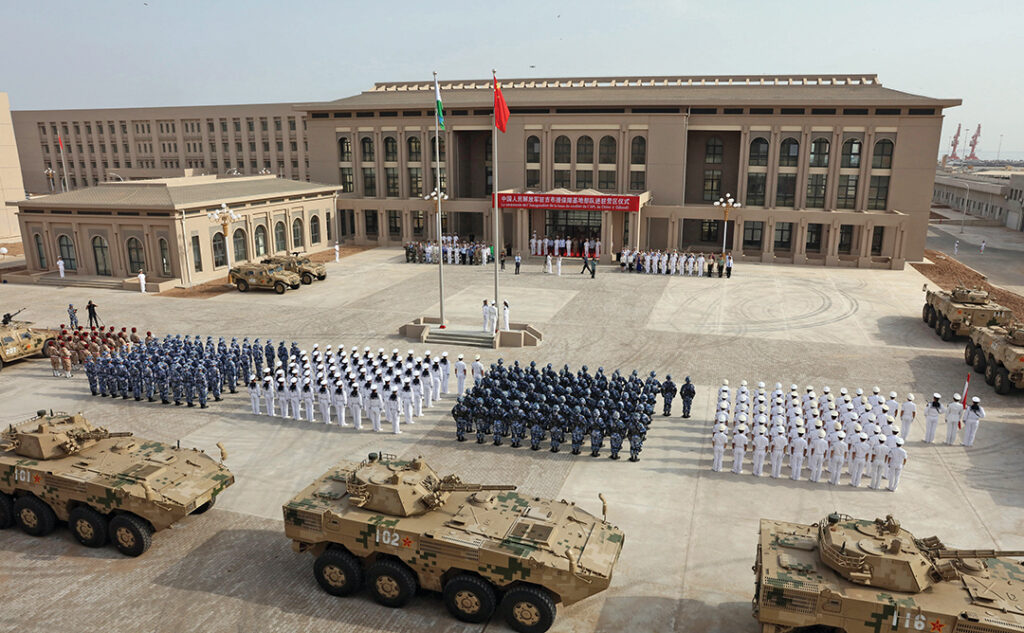 People’s Liberation Army personnel attend the opening ceremony of the People’s Republic of China’s military base in the East African nation of Djibouti in August 2017.

As the PRC’s economy has stalled, the country’s leadership can no longer make outlandish spending commitments, confident that future growth will generate the resources needed to make good on past promises. For the first time in four decades, the PRC faces hard budget constraints. At a time when the PRC is allowing strategic firms such as semiconductor designer Tsinghua Unigroup and carmaker Brilliance Auto to default on bond payments, it is clear that state subsidies are no longer as forthcoming as they once were. The Chinese government is starting to make the difficult choices about spending priorities that other governments have long been used to, and the military budget is not immune.

The seriousness of the China challenge has always been premised on the PRC’s seemingly bottomless military budgets and its penchant for rapid technological upgrading. Today’s PLA Navy is primarily a small-ship force, consisting of large numbers of relatively simple, inexpensive destroyers, frigates and corvettes. Like the Soviet Union’s once-mighty 1,000-ship navy, it’s a fleet on the cheap. To challenge the U.S. Navy, or even to emulate the U.S. Navy’s capacity to project power far beyond America’s shores, the PLA Navy would require an extraordinary long-term financial commitment from the Chinese government.

In isolation, that’s a commitment the PRC could probably afford. In the context of its many other military and diplomatic commitments, it is perhaps not first on the PRC’s list. The PRC could only afford to dominate the maritime trade route if it gave up on other budgetary priorities, such as jet fighter development, anti-ship ballistic missiles, artificial intelligence and the space program. At the same time, the U.S.-China tech war has catapulted indigenous semiconductor development, which will be costly, to national defense priority No. 1. That’s not to mention the myriad financial emergencies looming in China’s banking sector. Given that kind of competition, the militarization of the Maritime Silk Road, however desirable to PRC military planners, might just have to wait.

Share
Previous Speaking Up For Sovereignty
NextAnchored in Partnership