The Philippines faces a large array of security issues, including kidnappings that fund terrorist activities; piracy in an area in which over U.S. $40 billion worth of cargo flows; trafficking of drugs, weapons and people; cigarette, alcohol and fuel smuggling; and illegal fishing that not only destroys marine habitats but damages the nation’s economy.

At a policy level, however, the Philippine government and Navy continue to focus on traditional areas of geopolitics — primarily concern about the People’s Republic of China’s overlapping claims in the South China Sea. This can divert attention from the wide range of transnational organized crimes taking place in the waters of the Philippines.

The diversity of maritime threats complicates enforcement. The Navy, Coast Guard, National Police Maritime Group and National Coast Watch Center (NCWC) form the core of a web of institutions mandated to contribute to aspects of maritime security. They are unified by their primary concern: a lack of capability, mainly understood as physical assets. Lobbying for greater resources is often difficult, and maritime security budgets remain dominated by the Navy. In consequence, Coast Guard and Navy members have suggested that education and advocacy are required to raise awareness of the scope of maritime security issues. So far, this has been done through a Maritime and Archipelagic Nation Awareness Month campaign, led by the National Coast Watch Council.

All agencies involved recognize that better cooperation could help mitigate the capability gap through pooling resources. However, there continue to be coordination challenges and confusion about overlapping roles. The Navy and Coast Guard were separated in 1998 and often find themselves competing for resources. This can lead to a lack of transparency and, sometimes, tension between the agencies.

Recently, there has been promising movement concerning coordination despite these issues, and there is a sense of optimism among the agencies that relations are heading in the right direction. Two developments stand out. 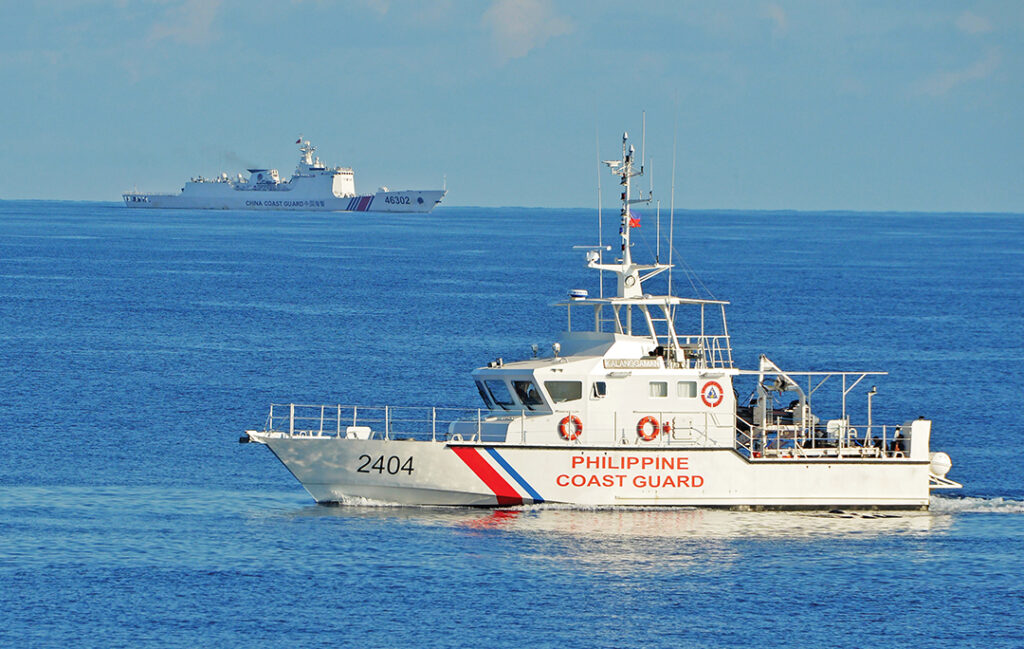 A Philippine Coast Guard vessel sails past a Chinese coast guard ship during a search and rescue exercise between the Philippine and U.S. coast guards near Scarborough Shoal in the South China Sea. AFP/GETTY IMAGES

First, the NCWC was implemented in 2015 as a point of contact for maritime security coordination. While the NCWC lacks command potential (compared with Thailand’s Maritime Enforcement Coordinating Center, for example), it could enhance interagency coordination by serving as a focal point and knowledge source concerning the Philippines’ territorial waters. The NCWC operates an expanding coast watch system, which forms the core of the Philippines’ maritime domain awareness.

Second, an interagency protocol has been drafted to further facilitate cooperation. This is perceived as a significant step toward defining agency responsibilities in the Philippines’ maritime security policy, though it falls short of a full national maritime strategy.

International cooperation around maritime security has also become a focus for the Philippines. The Coast Guard has led initiatives including the Contact Group on maritime crime in the Sulu and Celebes seas, co-hosted by the United Nations Office on Drugs and Crime Global Maritime Crime Programme and bringing together maritime security actors from across the region, and it also signed a memorandum of understanding with the Indonesian Maritime Security Agency. A trilateral cooperative agreement among Indonesia, Malaysia and the Philippines — incorporating coordinated patrols in the Sulu and Celebes seas and information sharing — is maturing despite ongoing sovereignty disputes.

As a result of these initiatives, there is increasing, yet still cautious, optimism that despite expected capability gaps in terms of assets, the Philippines will be able to better achieve maritime security if it continues to strengthen coordination domestically and internationally.

Members of the National Police Maritime Group, NCWC, Navy and Coast Guard have argued that the most important step would be a strategy that clearly identifies the problems and priorities of the Philippines’ maritime security and delineates maritime agencies’ roles within this. This would help bring forward wider maritime security issues beyond geopolitics. It could also ease obstacles to coordination by demonstrating nodes of common interest, establishing areas of responsibility and offering a clearer basis for action going forward.

Dr. Scott Edwards is a research associate with SafeSeas, a network of researchers who investigate maritime security, ocean governance and crimes at sea. He produced this article following a research visit to the Philippines, where he focused on security practitioners. SafeSeas originally published this article in October 2019. It has been edited to fit FORUM’s format.