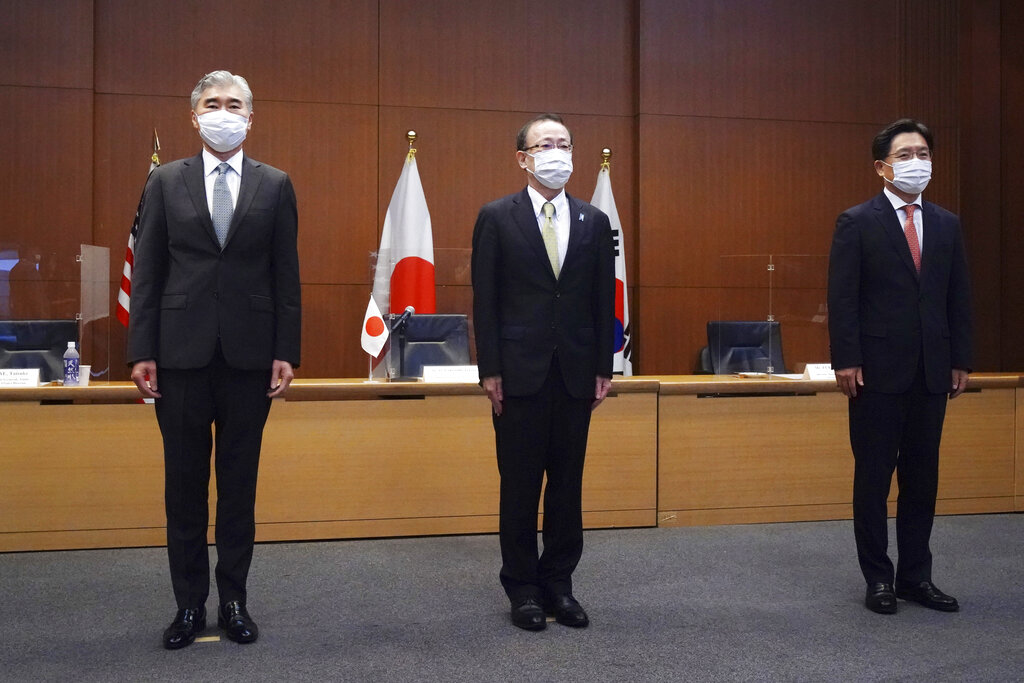 Senior diplomats from Japan, South Korea and the United States called on North Korea to return to talks over its missile and nuclear development, a day after Pyongyang announced it successfully tested new long-range cruise missiles on September 13, 2021, suggesting advancement of its military capabilities. Two days later, on September 15, both North and South Korea each fired missiles. The North fired two additional ballistic missiles off its east coast and the South said it carried out a successful test of a submarine ballistic missile.

Kim said the three countries were open to diplomacy with the North “as we seek to make tangible progress that increases the security of the United States and our allies.” He called on North Korea to “respond positively to our multiple offers to meet without preconditions.”

Washington and its allies will continue to work to fully implement all United Nations Security Council resolutions in addressing North Korea’s missile development, he added.

The North hailed the missiles as a “strategic weapon of great significance,” suggesting that they were developed with the intent to arm them with nuclear warheads. North Korea says it needs nuclear weapons to deter what it claims is hostility from Washington and Seoul.

Japanese officials and some experts said North Korea’s missile test was a “new threat” to the region. Chinese Foreign Minister Wang Yi traveled to Seoul for talks with South Korean officials over bilateral relations and the freeze in nuclear diplomacy with North Korea.

Wang met with South Korean Foreign Minister Chung Eui-yong, where Chung is sought a more active role from Beijing, Pyongyang’s main ally and economic lifeline, in persuading the North to return to negotiations.

Japanese Foreign Minister Toshimitsu Motegi told reporters that the trilateral meeting, which was scheduled before North Korea’s September 13 missile test, would be a “good occasion to reconfirm close cooperation among the three countries and discuss the latest North Korean situation.”