Illegal, unreported and unregulated (IUU) fishing threatens resource sustainability and equity. A major challenge with such activity is that most fishing vessels do not broadcast their positions and are “dark” in public monitoring systems. Combining four satellite technologies, we identified widespread illegal fishing by dark fleets in the waters between the Koreas, Japan and Russia. We found more than 900 vessels of Chinese origin in 2017 and more than 700 in 2018 fished illegally in North Korean waters, catching an estimated amount of Todarodes pacificus (Japanese flying squid) approximating that of Japan and South Korea combined (more than 164,000 metric tons worth over U.S. $440 million). Furthermore, we found 3,000 small-scale North Korean vessels fished, mostly illegally, in Russian waters. These results can inform independent oversight of transboundary fisheries and foreshadow a new era in satellite monitoring of fisheries.

In October 2018, world leaders pledged more than U.S. $10 billion to protect the world’s oceans. A major objective of this initiative is to reduce IUU fishing, which results in the loss of billions of dollars, threatens fish stocks and marine ecosystems, and jeopardizes the livelihoods and food security of legitimate fishers and communities. IUU fishing, however, is often conducted by “dark fleets” — vessels that do not appear in public monitoring systems— and is therefore difficult to guard against.

Although many dark vessels broadcast their positions on country-mandated vessel monitoring systems, these data are often tightly guarded, limiting usability for third-party oversight or transboundary management. Revealing the activities of dark vessels could address this information gap, improving transparency and accountability.

These challenges with dark fleets and IUU fishing are epitomized in the waters surrounded by North Korea, South Korea, Japan and Russia, where geopolitical tensions and disputed boundaries create a vacuum of shared data and management. In these poorly observed waters, the same stocks of Japanese flying squid are targeted by several fleets, including the Chinese distant-water fleet. Although the Chinese fleet has fished in North Korean waters since 2004, its fishing activity and catches are only intermittently published, and not since 2016. 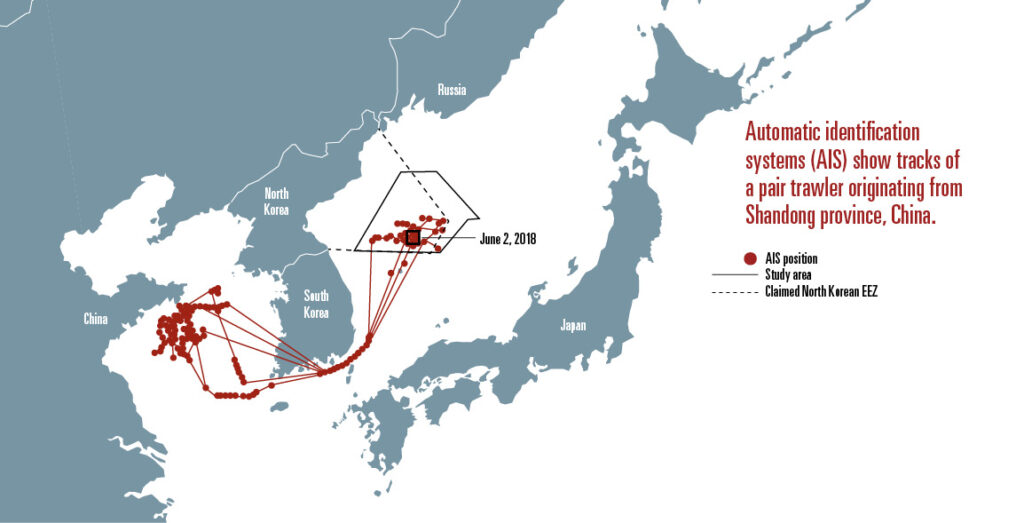 This lack of information sharing prevents accurate stock assessment in a fishery where reported catches have dropped by 80% and 82% in South Korean and Japanese waters, respectively, since 2003. This inability to assess the stock is concerning considering the critical importance of squid in the region. Japanese flying squid is South Korea’s top seafood by production value, one of the top five seafoods consumed in Japan and, until recent sanctions, was the third largest North Korean export.

In 2017, following North Korea’s testing of ballistic missiles, the United Nations Security Council adopted resolutions to sanction the country, restricting foreign fishing after September 2017. These resolutions prohibit the procurement of seafood from North Korea, joint ventures between North Korea and other countries without U.N. approval and North Korea from selling or transferring fishing rights.

Because sanctions under Chapter VII of the U.N. Charter are binding and implemented via domestic law and policy, any violations of these sanctions by Chinese vessels since September 2017 would constitute a violation of public international law and domestic Chinese law. Despite this, the South Korean Coast Guard has observed hundreds of vessels crossing into North Korean waters, and random inspections of these vessels by the East Sea Fisheries Management Service suggest that they are of Chinese origin. Evidence of continued Chinese fishing in North Korean waters is also supported by domestic Chinese documentation.

To illuminate the activities of dark fleets in one of the most contested regions of the world’s oceans, researchers combined local expertise with four satellite technologies. Individual technologies have distinct limitations but, when combined, can provide an informative picture of fishing activity. Automatic identification systems (AIS) provide detailed movement and identity information but are used by only a fraction of vessels. Satellite synthetic aperture radar (SAR) can identify all large metal vessels and penetrate clouds but lacks regular, global coverage of the oceans. The Visible Infrared Imaging Radiometer Suite (VIIRS) sensor has global, daily revisit time and can detect vessels with bright lights but is limited by clouds.

Last, high-resolution optical imagery provides the best visual confirmation of vessel activity and type but is also limited by clouds and, until recently, was not available at high enough resolution and frequent enough revisit time to monitor fishing fleets spanning exclusive economic zones (EEZs). Although these four technologies have previously been used to estimate fishing and identify individual vessels, they have not been combined to publicly reveal the activities and estimated catches of entire fleets at this scale.

To monitor the activity of these vessels, we obtained 22 days of 3-meter resolution optical imagery from Earth-imaging company Planet’s satellite constellation, PlanetScope, covering most of the claimed North Korean EEZ in 2017 and 2018. We then trained a convolutional neural network to identify pair trawlers in this imagery, as these vessels show a distinctive fishing pattern and comprise the largest proportion of foreign vessels in the region. (A pair trawler is one of two vessels towing a single trawl.) After identifying the location of the fleet with the neural network, we tasked Planet’s 0.72-meter resolution SkySat satellites to image these vessels, further verifying that they are pair trawlers. We also used SAR imagery from three satellites to verify the location and size of the fleet. With these data, we estimated that at least 796 distinct pairs of trawlers operated in North Korean waters in 2017 and at least 588 did so in 2018. Only a fraction of these vessels broadcast AIS, but the signals from these AIS-broadcasting vessels demonstrate that the vessels originated from Chinese ports and fished in Chinese waters.

To further verify their Chinese origin, we matched AIS detections from 140 of these vessels to Planet imagery. The AIS signals of these vessels corroborate the South Korean Coast Guard’s inspections, confirming that they originated from China.

The second most common fishing vessels thought to be of Chinese origin in North Korean waters are large, 55- to 60-meter “lighting vessels” that use bright lights to lure target species; we identified these vessels by using low-resolution, high-sensitivity optical imagery produced by VIIRS at night. Although several fleets in the region use lights, Chinese vessels are known to be by far the brightest, carrying up to 700 incandescent bulbs and generating over 1,000 lux, equivalent to the light of some football stadiums. This brightness allows us to distinguish these vessels from other fleets in the area, and we confirmed this vessel classification by tasking Planet’s higher-resolution SkySat to image an area where these bright vessels clustered.

VIIRS enabled us to estimate a minimum of 108 lighting vessels of Chinese origin operating in North Korean waters in 2017 and 130 in 2018. We also detected low-intensity lighting vessels, identified as the North Korean small-scale fleet. This fleet consists of small 10- to 20-meter wooden vessels with only five to 20 bulbs. We further verified vessel type through SAR and Planet imagery of the port of Chongjin, North Korea. We estimated that about 3,000 North Korean vessels fished in the Russian EEZ during 2018.

The likely Chinese fleet, however, targeting the same stock, uses brighter lighting power, pair trawling and a greater number of vessels. Given the declining CPUEs of South Korean and Japanese squid jiggers and the drastic decline in squid larval densities since 2003, the large number of vessels revealed through this study is particularly concerning.

In addition to sustainability concerns, there are substantial implications for fisheries governance and regional geopolitics. These vessels originate from China and, based on inspections by the South Korean authorities, are assumed to be owned and operated by Chinese interests. However, because the vessels often do not carry appropriate papers, they may plausibly be so-called three-no boats operating outside official Chinese authority, with no registration, no flag and no license to operate.

If these vessels do not have approval from both the Chinese and North Korean governments, they are fishing illegally; Chinese regulations require ministerial approval to fish in foreign waters, and the U.N. Convention on the Law of the Sea grants coastal states sovereign rights to manage living marine resources in their waters. Alternatively, if they are operating with approval from either or both governments, those state(s) are in violation of U.N. Security Council sanctions. Notably, the Chinese government has repeatedly refuted this latter scenario, confirming its support for the current sanctions. Regardless of the scenario, each results in the violation of either or both international and domestic law.

Bearing this in mind, our analysis identified over 900 distinct illegal vessels in 2017 after sanctions began and over 700 in 2018, representing the largest known case of illegal fishing perpetrated by a single distant-water fleet.

The presence of this foreign fleet also has severe consequences for North Korean small-scale fishers. Evidence suggests that competition from these larger trawlers displaces these small-scale wooden boats, shifting substantial effort to neighboring Russian waters. This kind of shift in response to foreign fleets has been documented elsewhere and is also consistent with local fisheries ecology in this region.

During the last trimester of the year, Japanese flying squid migrate south, through the Russian EEZ, providing an opportunity for the North Koreans to fish before the foreign fleets deplete the stock. A large portion of this North Korean fishing in Russian waters is, however, also illegal. The Russian government has authorized fewer than 100 North Korean boats since 2014, and in 2017, no permits were granted. In contrast, we estimated about 3,000 vessels fished in these waters during 2018. North Korean artisanal boats are severely underequipped for the long-distance travel required to reach Russian fishing grounds. As a result, between 2014 and 2018, 505 North Korean boats washed ashore on Japanese coasts.

These incidents frequently involve starvation and deaths, and local media report that many fishing villages on the eastern coast of North Korea have now been coined “widows’ villages.” The illegal fishing patterns documented here likely exert a heavy toll on fish and fishers alike.

We suggest that this analysis represents the beginning of a new era in satellite monitoring of fisheries. Multiple satellite sources have long been available to government agencies for targeted surveillance. However, it is only with recent increases in data availability, accessibility and computing power that these techniques can now be performed at large enough spatial and temporal scales — and by small, independent groups of researchers — to enable transparent fisheries monitoring. Although some aspects of this study are particular to the region (e.g., prevalence of pair trawlers), most techniques are easily transferable, such as matching AIS to vessel detections from freely available global satellite imagery or radar.

For the satellite data sources that are not yet freely available, such as commercial satellite radar or high-resolution optical imagery, the cost per image is decreasing rapidly. Combining these satellite technologies can reveal the activities of dark fleets, filling a major gap in the management of transboundary fisheries.

Furthermore, these technologies, when accompanied by local expertise, can identify potential hot spots of IUU fishing. Global fisheries have long been dominated by a culture of confidentiality and concealment, and achieving a comprehensive view of fishing activities at sea is an important step toward sustainable and cooperative fisheries management.

Editor’s note: COVID-19 appears to have significantly impacted the number of North Korean boats sailing into the exclusive economic zone of other countries. For example, the number of boats believed to have originated in North Korea that drifted ashore on Japanese coasts between October 2020 and March 2021 fell 90% compared to the previous year, according to the Japan Coast Guard. Research for this report was conducted prior to the coronavirus pandemic and therefore reflects pre-pandemic behavior.

This article originally was published in the journal Science Advances in July 2020. It has been edited to fit FORUM’s format and reprinted/(or translated when applicable) from Park et al. Sci. Adv. 2020; 6: eabb1197. © The authors, some rights reserved; exclusive licensee AAAS. Distributed under a CC BY-NC 4.0 license http://creativecommons.org/licenses/by-nc/4.0/