French Maritime Security In The Indo-Pacific 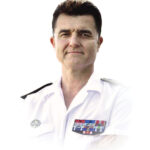 As a de facto Pacific nation, France is concerned with issues in the Indo-Pacific. Its territories in the region are home to 1.6 million people, and 200,000 French citizens live in Indo-Pacific countries, Rear Adm. Jean-Mathieu Rey, the French joint commander of the Asia-Pacific maritime zone, known as ALPACI, and the Armed Forces in French Polynesia, told FORUM. Rey served at sea for 25 years, mainly in the Indo-Pacific. A graduate of the Higher Command and Staff Course in the United Kingdom and French equivalent courses, he held positions ranging from commando platoon leader, patrol boat commander and frigate commander to chief of staff of the carrier strike group Charles de Gaulle and commander of the air defense destroyer Forbin. Detached to the Foreign Affairs Ministry, he was also advisor for security and defense cooperation in Asia and South America. From 2017-2020, he served as deputy director of Fleet Service Support, overseeing operational preparation of surface ships, nuclear submarines and aircraft carrier.

How big is the French exclusive economic zone (EEZ) in the Pacific?

France has the second-largest EEZ in the world. Among its various regional EEZs, the French Pacific EEZ is the largest with 6.8 million square kilometers distributed around four hubs between Australia and Mexico. They include Clipperton, French Polynesia, New Caledonia, and Wallis and Futuna.

How is the EEZ controlled?

What assets do the French Armed Forces use?

The French Armed Forces in the Pacific are equipped with versatile assets such as surveillance frigates, patrol ships, high seas support and assistance ships and coastal tugboats. Aircraft such as the Falcon Guardian, Casa and Dolphin helicopters are used as well. Moreover, surveillance by satellite allows wide areas to be covered.

For coast guard missions, I coordinate the action of all the sea-related services and agencies such as customs, maritime affairs department, gendarmerie, national police and Polynesian administration, which is in charge of maritime resource protection. In 2011, a Maritime Inter Agency Centre was created to improve maritime surveillance. It is composed of three cells, respectively in charge of fusion of information, fishing surveillance, and search and rescue. 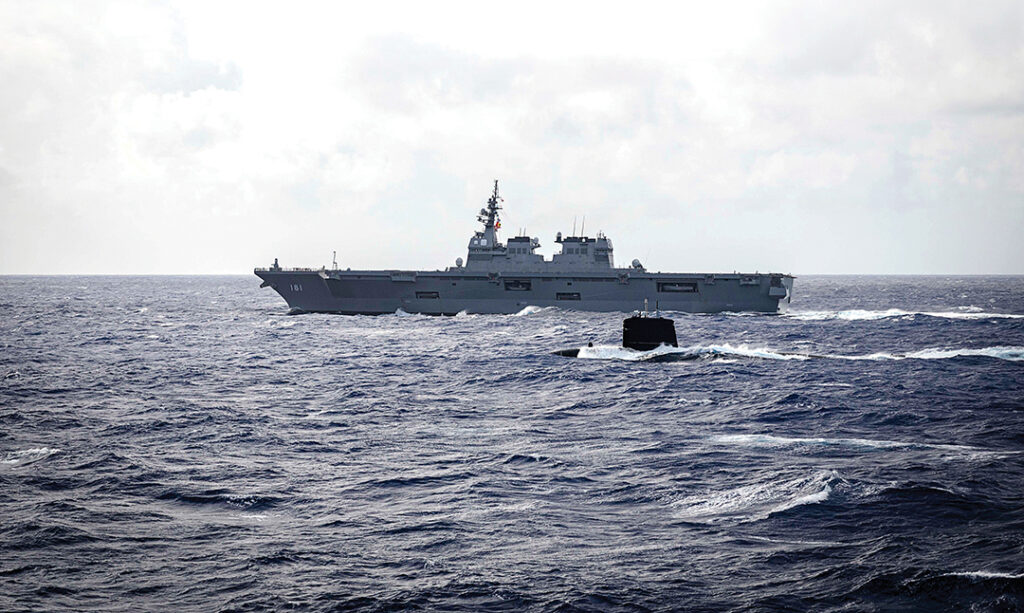 Is France’s maritime presence limited to the French EEZ?

No. Maritime security threats are not limited by national maritime limits, and I am convinced that we have to adopt a global approach to address Pacific maritime challenges.

With 7,000 to 10,000 defense personnel, France is the only European state to maintain a permanent military presence, which underlines its regional commitment and global ambition. The military organization relies on two regional commands: one for the maritime zone of the Indian Ocean in Abu Dhabi, known as ALINDIEN, and mine in Papeete for ALPACI. In addition, three local commands in Djibouti, La Reunion and New Caledonia provide assets and forward support on a regular basis, while protecting their dedicated EEZs.

In this framework, you will understand that I do not intend to limit French action to French EEZs. As a nuclear power and permanent member of the United Nations Security Council, France is fully involved in dealing with regional maritime threats and crisis prevention. Military assets permanently based in the Pacific can easily be reinforced by vessels or aircraft coming from mainland France. For example, the French carrier strike group operated in the area in 2019 when carrier vessel Charles de Gaulle made a port call at Singapore during the Shangri-La Dialogue, and French long-range aircraft offered critical support in the Pacific during the COVID-19 crisis. Other deployments, including our amphibious task group, destroyers or maritime patrol aircraft, are planned and will be renewed each year. Even if we deal with maritime concerns, an interagency approach is fundamental to reach operational effectiveness.

The armed forces under my command also deal with nuclear proliferation in North Korea, with freedom of navigation at sea and by air in the commons, and with multilateralism.

What are the main challenges in the area?

To defend freedom of navigation is paramount. Maritime security all over the world is based on the United Nations Convention on the Law of the Sea (UNCLOS), which aims to preserve freedom of navigation. France’s naval commitment across the Pacific intends to promote and defend this international rules-based order. UNCLOS was negotiated for a long time among more than 150 countries. In 1982, at Montego Bay, Jamaica, they came up with an agreement on the best compromise between the right of coastal states to exploit maritime resources and the historic principle of freedom of navigation outside territorial waters. I think we all have to defend and promote this compromise.

Narcotics trafficking is of high importance. How does France act against it?

To counter drug traffickers, our strategy at sea consists of: 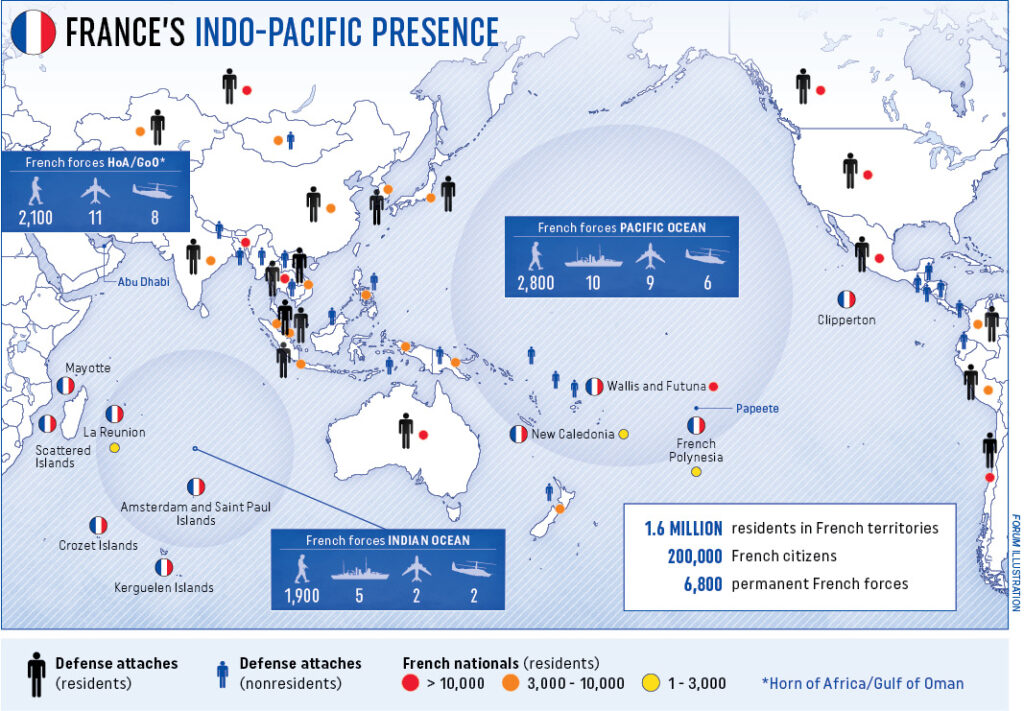 When all of these pieces of information lead to an intervention, I am responsible for the coordination at sea of all services concerned (gendarmerie, customs and prosecutor).

Thanks to this strategy, French assets seized more than 5 tons of cocaine from ships on their way from Central America to Australia/New Zealand between 2016 and 2020. Hundreds of ships were also checked by gendarmerie and customs units.

Many Indo-Pacific countries worry about overfishing. What is France’s strategy in this domain?

Regarding illegal fishing, the French strategy relies on three mainlines:

Maximizing the benefits of satellite imagery.

As a consequence, foreign fishing vessels know they are being watched, inside and outside the EEZ, and they do not venture to fish illegally in our waters.

In 2020, we continuously monitored 1,677 foreign fishing boats, and Guardian aircraft flew over 304 fishing boats in the EEZ and its surroundings.

Strong and effective cooperation practices with Pacific island countries are also in place. Examples of such measures include maritime information sharing on a weekly basis, patrols by French ships in other EEZs, deployment of liaison officers onboard Navy vessels and law enforcement training for local authorities.

How does France cooperate with other Indo-Pacific countries?

France maintains bilateral relationships with every country in the area through its important diplomatic network, as well as through regular military cooperation.

Moreover, France is fully integrated into multinational organizations, such as the Western Pacific Naval Symposium, the Joint Heads of Pacific Security meeting, and the Pacific and Indian Ocean Shipping Working Group. France participated in the most recent ASEAN [Association of Southeast Asian Nations] Defense Ministers Meeting-Plus.

Since 2002, France has also been a member of a quadrilateral defense cooperation organization. The group was created in 1992 on the initiative of Australia, New Zealand and the U.S. to provide assistance to island countries to optimize structural cooperation for bilateral military and security cooperation. The organization also strives to strengthen political dialogue between Pacific countries and to keep up with any evolution regarding security.

France takes part in many regional exercises, such as the Rim of the Pacific (RIMPAC). Even with the challenging pandemic context, we have been able to send a French Navy ship to this important exercise, which shows the strong partnership we have with U.S. Pacific Fleet as well as with all the U.S. forces in the Indo-Pacific. But RIMPAC is not the only important exercise. I cannot conclude without mentioning the Marara and Croix du Sud exercises, which are organized by France, alternating every two years, respectively, in Polynesia and New Caledonia. The Marara exercise in April and May 2021 simulated a humanitarian assistance and disaster relief operation in a Pacific island country and proved an important opportunity to train together and exchange experiences on a realistic scenario.

Regularly deploying naval and/or air assets in this wide space contributes to maintaining bilateral and multilateral relations with France’s partners. Our two frigates (one based in Tahiti and one in Noumea) are well-known not only in Southeast Asia but also in the Eastern Pacific. France also deploys, as regularly as possible from France to the Pacific region, the Jeanne d’Arc task group (nearly every year since 2013), consisting of a landing helicopter dock and a frigate, as well as its carrier strike group or destroyers.

Last, but not least, I would also highlight France’s capabilities to deploy air assets for short terms far from their bases in mainland France. In August 2018, Mission Pegase participants (four Rafale fighters and their support aircraft) visited several partner countries in Asia after attending the Pitch Black exercise in Australia.

France’s strategic priorities in this challenging region are defined in “France’s Defence Strategy in the Indo-Pacific,” published in 2019: