In the early hours of October 26, 2020, the bulk carrier El Matador was in the eastbound shipping lane of the Singapore Strait, positioned about 3.2 nautical miles (6 kilometers) off Nongsa Point on the Indonesian island of Batam. The Cypriot-flagged vessel was navigating the strait — one of the world’s busiest maritime channels — as part of its weekslong journey from the Arabian Sea port of Salalah, Oman, to Caofeidian, a port on China’s Bohai Sea, when it received a shore-to-ship alert: An unknown craft had been seen alongside the El Matador.

Crew members soon spotted intruders in the engine room and raised an alarm, sending the four perpetrators fleeing from the 200-meter-long carrier. The El Matador diverted to an anchorage off Batam, where the Indonesian Navy boarded and searched before the ship resumed its voyage east, its crew unharmed and its cargo untouched.

Meanwhile, other authorities were alerted, including the Singapore Navy’s Maritime Security Task Force and the Singapore Police Coast Guard, and a safety navigational broadcast was issued to warn mariners in the area. 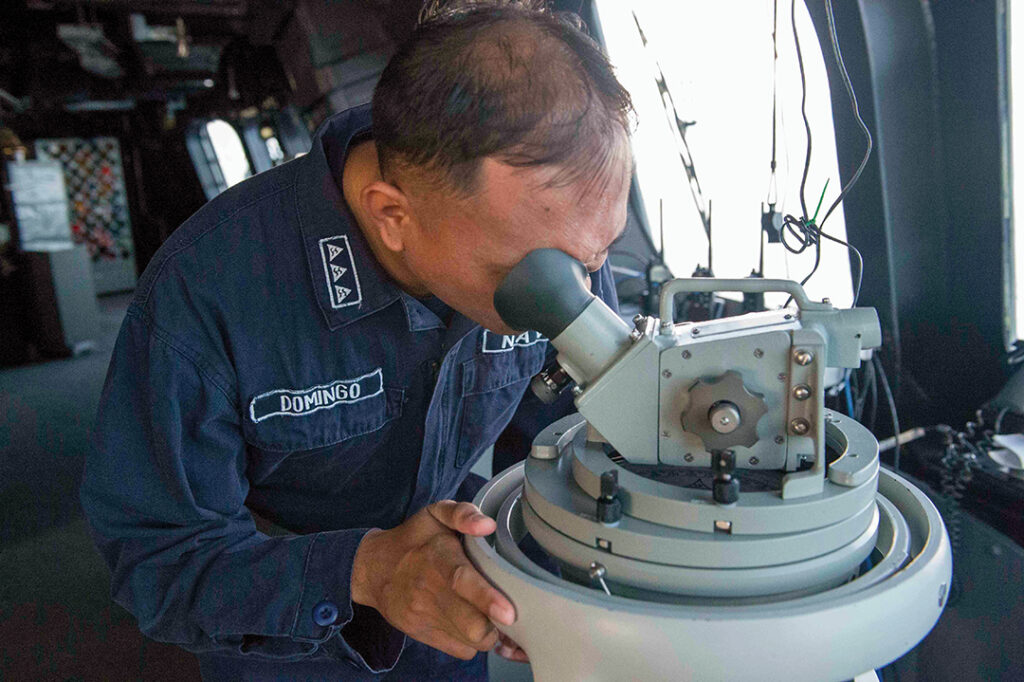 In a matter of hours, the incident aboard the El Matador had illustrated a key finding of a major report on maritime security: The Indo-Pacific is a global leader in maritime cooperation.

“In many regions, piracy and armed robbery at sea are considered by seafarers to be the most pressing maritime security threats,” according to the 2020 Maritime Security Index published by the Stable Seas program, part of the Washington, D.C.-based nonprofit One Earth Future. “Fortunately, strong communities of states, civil society organizations, and private companies have come together to address this concern.”

The Indo-Pacific’s reputation for effectively combating piracy and other maritime crime has been earned through a yearslong approach anchored in multinational partnerships, interagency collaboration and information sharing. As such, experts consider the region well-positioned to respond to a rise in maritime crime reported in 2020 — an increase believed to be, at least in part, a ripple effect of the coronavirus pandemic that emerged in late 2019 in Wuhan, China, and the resulting economic contraction.

The episode aboard the El Matador was one of 97 incidents, including two attempted incidents, of piracy or armed robbery against ships in the Indo-Pacific during 2020, according to the Regional Cooperation Agreement on Combating Piracy and Armed Robbery against Ships in Asia Information Sharing Centre (ReCAAP ISC). That was the most since 2017.

Four of the incidents in 2020 were acts of piracy, all in the South China Sea, the multinational center’s annual report found. (Although each includes similar offenses, armed robbery against ships is defined as occurring within a state’s territorial waters, while piracy occurs in international waters, often referred to as the high seas.) Overall, 74% of the incidents involved petty theft by unarmed perpetrators with no injuries to crew members.

The Indo-Pacific encompasses some of the world’s most heavily trafficked sea routes and biggest ports, with more than half of all commercial shipping traffic traversing its waters. Much of that maritime commerce passes through the 105-kilometer-long Singapore Strait, a narrow waterway between the city-state of Singapore and Indonesia’s Riau Archipelago to the south. Singapore’s port is the biggest in Southeast Asia and No. 1 globally for bunkering, or ship refueling, according to the Maritime and Port Authority of Singapore. Up to 1,000 vessels are in port at any one time, with a ship arriving or departing every couple of minutes.

At 16 kilometers wide, the strait is a shipping chokepoint, putting cargo vessels such as the El Matador within reach of smaller shore boats. Indeed, most of the 34 incidents reported there in 2020, up three from the prior year, fit a similar pattern: A handful of perpetrators, sometimes armed with knives, boarded an eastbound bulk carrier under the cover of night. Only one incident involved injuries to the crew; stolen items included ship stores, engine spares, scrap metal and construction material. 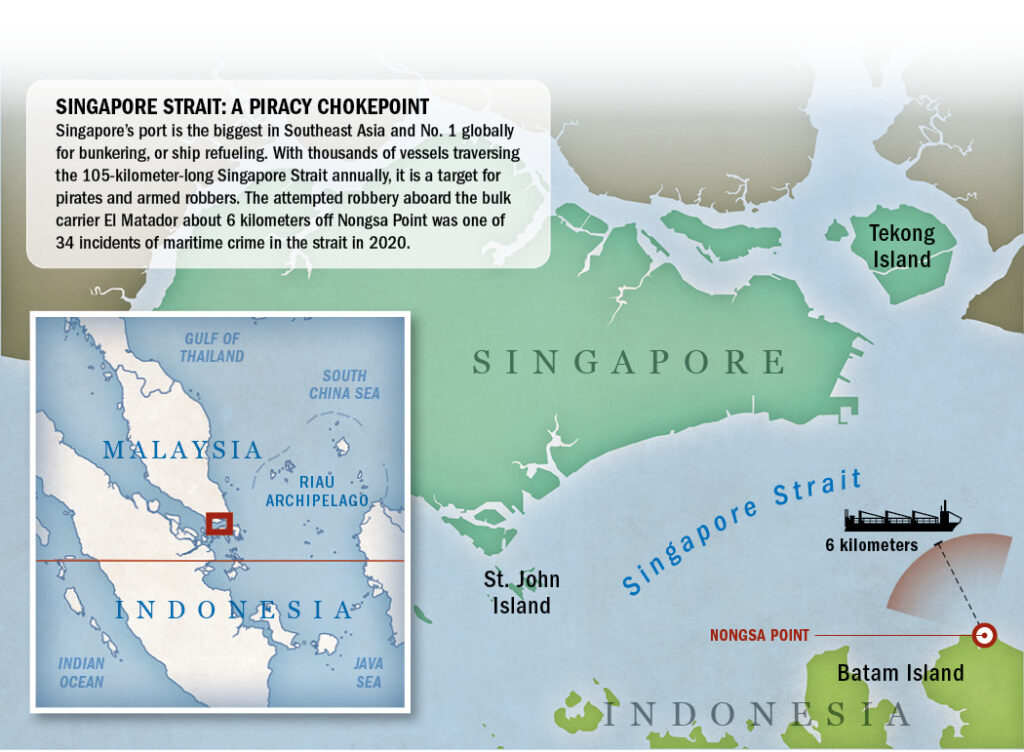 “However, if opportunistic robbers see that they can commit crimes with impunity, the theft of ship stores today can easily escalate to more serious incidents, including confrontation with crew,” Masafumi Kuroki, executive director of the ReCAAP ISC, said in releasing the report during the center’s 12th Nautical Forum in January 2021. The virtual event drew about 100 participants from military and law enforcement agencies, academic institutions, shipping companies and industry associations. Presenters included the Philippine Coast Guard and the Singapore Police Coast Guard.

“Beyond vigilance, timely reporting by ships, enhanced patrol by enforcement agencies, as well as cooperation between littoral states, we believe that arrests and bringing perpetrators to justice is an essential deterrence to stop the increase of incidents,” Kuroki said.

The November 2006 creation of the Singapore-based center was part of an initiative described as “the first regional government-to-government agreement to promote and enhance cooperation against piracy and armed robbery against ships in Asia.” As the ReCAAP ISC approaches its 15th anniversary, its 14 founding member states from North, Southeast and South Asia have been joined by six other nations: Australia, Denmark, the Netherlands, Norway, the United Kingdom and the United States. The center’s partner organizations include the Asian Shipowners’ Association, the International Maritime Organization and Interpol.

Its work focuses on three pillars: information sharing, such as weekly updates and special reports; capacity building, including workshops, executive programs and training videos; and cooperative arrangements, such as those with its partner agencies, as well as events including the forum and a piracy and sea robbery conference.

Stable Seas partners with governments, militaries and other organizations globally to eliminate maritime activities that facilitate and finance organized political violence. It launched its annual Maritime Security Index in 2018 to map and measure a range of issues — and the governmental and nongovernmental response to them — across more than 70 littoral nations in Africa, the Indo-Pacific and the Middle East. As “the maritime space gains attention as a theater for nontraditional security challenges and as space of increasingly important economic potential, so too does the need to empirically measure the scope of the challenges and the progress made in the maritime space,” Jay Benson, a Stable Seas project manager in the Indo-Pacific, wrote in a February 2020 article for the online magazine The Diplomat.

In addition to piracy and armed robbery, the 2020 index noted, the Indo-Pacific faces challenges from the illicit maritime trafficking of drugs and wildlife products. Although kidnapping for ransom by terrorists remains a threat, it has been greatly diminished through collaborative efforts, including the trilateral maritime surveillance conducted in the Sulu Sea since 2016 by Indonesia, Malaysia and the Philippines.

“The region has been quick to respond to this form of maritime crime through initiatives such as coordinated patrols … and increased information sharing through entities like ReCAAP,” Benson wrote in The Diplomat. 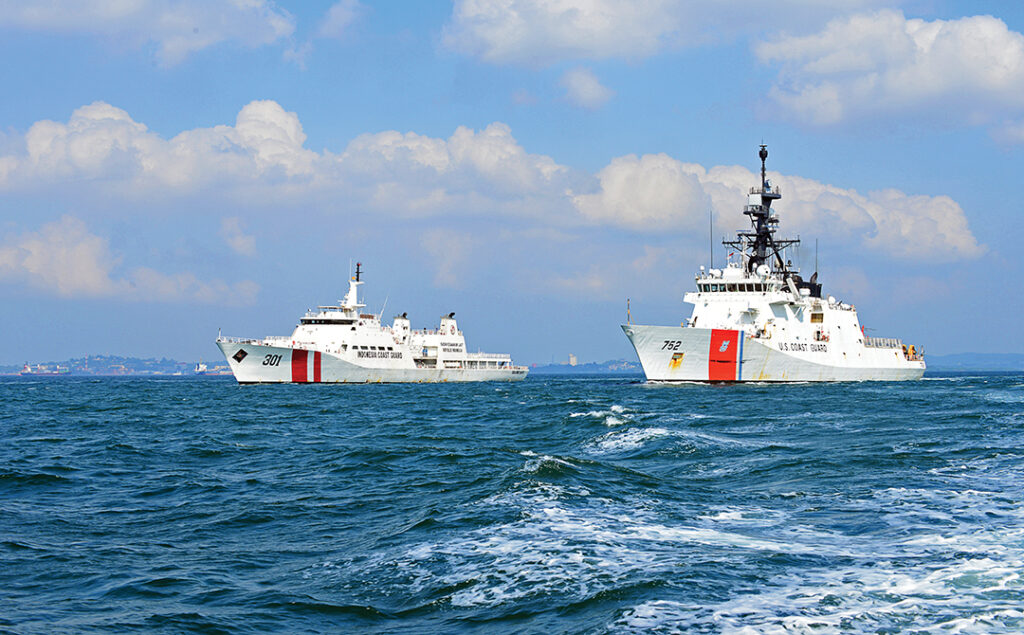 Like the waters of the Indo-Pacific, the region’s maritime crime-fighting efforts are expansive, fusing military forces and law enforcement personnel, civilian government experts, shipping operators and data scientists. In addition to the ReCAAP ISC, these collaborative initiatives include:

The International Maritime Bureau Piracy Reporting Centre in Kuala Lumpur, Malaysia, provides around-the-clock monitoring of shipping lanes worldwide. The bureau, a division of the International Chamber of Commerce, founded the center in 1992 as a conduit for reporting piracy and armed robbery incidents to local authorities and for warning shipmasters of trouble spots.

Under its Pacific Maritime Security Program, the Australian Department of Defence has committed U.S. $1.5 billion over 30 years to help Pacific island countries defend their sovereignty and security. The program will provide 21 Guardian-class patrol boats to 13 nations by 2023, as well as training, maritime coordination expertise and aerial surveillance capabilities to deter crime in the nations’ exclusive economic zones and on the high seas.

The Global Maritime Crime Programme, part of the United Nations Office on Drugs and Crime, supports security efforts across the Indo-Pacific, including through maritime law enforcement dialogues; visit, board, search and seizure training; and maritime domain awareness technology to identify and target illicit activity.

The Information Fusion Centre, established in 2009 and hosted by the Singapore Navy, seeks to enhance regional maritime security through information sharing and collaboration, with international liaison officers deployed to the center alongside Singapore Navy personnel. Developed in 2019, the center’s web-based portal, IRIS, provides a real-time picture of maritime activities and can be accessed via mobile device from ships at sea.

The Southeast Asia Cooperation and Training (SEACAT) exercise, which marked its 19th iteration in mid-2020 as a virtual symposium due to the COVID-19 pandemic, brings together military personnel from Europe, the Indo-Pacific and North America to boost maritime security through multilateral coordination. SEACAT 2020 focused on bolstering  maritime domain awareness capabilities. “Whether it’s states concerned with direct state-to-state violence in the South China Sea or everybody else concerned with overfishing, piracy and counterterrorism, this is the nexus where all those diverse security interests collide,” said keynote speaker Gregory B. Poling, director of the Asia Maritime Transparency Initiative at the Center for Strategic and International Studies.

Turning the tide of maritime crime also calls for addressing its root causes, including economic and governance factors, experts contend. “Holistic approaches which connect military and naval responses with development and capacity building efforts are most likely to undermine the socioeconomic conditions which currently drive coastal populations to commit these crimes,” the Maritime Security Index noted. “Similarly, onshore stability and strong national rule of law are linked to low levels of piracy and armed robbery; piracy incidents are less likely in states with strong economies and governments, and where efficient law enforcement exists.”

The turbulence of 2020, with its brutal pandemic, lingering lockdowns and lost jobs, may partly account for the rise in piracy and armed robbery incidents, Kuroki told Nautical Forum attendees. “The economic hardships caused by COVID-19 to coastal communities could lead to more people resorting to sea robberies,” he said. “It is also possible that prolonged work of crew on board ships, due to the difficulty of crew changes, causes fatigue to the crew and may reduce their vigilance.”

The latter part of that testing year brought some welcome relief, however, as Indo-Pacific nations resumed maritime exercises that had been scuttled by virus-related travel restrictions and quarantines. In November and December 2020, for example, U.S. Coast Guard instructors conducted small boat operations training for Philippine Coast Guard members in Manila. It was the U.S. Coast Guard’s first training event in the Philippines since the pandemic began.

Such cooperation and information sharing among partners lies at the heart of the Indo-Pacific’s world-leading maritime security efforts, organizations such as the ReCAAP ISC and Stable Seas contend. The shore-to-ship alert that averted further danger aboard the El Matador in late October 2020 was issued through the Singapore Maritime and Port Authority’s vessel traffic information system, which taps advanced technology to monitor and manage the thousands of ships that pass through the strait.

“To combat piracy and armed robbery,” the Maritime Security Index noted, “it is crucial for governments, navies, and the shipping industry to share information.”