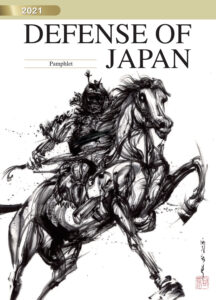 Japan must strengthen its defense capabilities and enhance its cooperation with the United States and other like-minded partners to counter the People’s Republic of China’s (PRC’s) relentless “unilateral attempts to change the status quo” in the region, according to the nation’s latest defense white paper.

The Chinese coast guard’s frequent intrusions into Japan’s territorial waters around the Senkaku Islands in the East China Sea and the People’s Liberation Army’s escalating activity around the self-governed island of Taiwan — as well as North Korea’s rapid development of ballistic missiles — highlight the acute security challenges and destabilizing factors facing the Indo-Pacific, noted “Defense of Japan 2021,” published in mid-July by Japan’s Ministry of Defense.

“Chinese military trends, combined with insufficient transparency about China’s defense policies and military affairs, have become a matter of grave concern to the region including Japan and the international community,” the paper noted.

Stoking concern are the increasing incursions by Chinese military aircraft into Taiwan’s airspace. The Chinese Communist Party has threatened to unify Taiwan with mainland China by force if necessary, even though the democratic island has never been part of the PRC, which was founded in 1949 after the communist takeover of the mainland.

“Stabilizing the situation surrounding Taiwan is important for Japan’s security and the stability of the international community,” the white paper noted. “Therefore, it is necessary that we pay close attention to the situation with a sense of crisis more than ever before.”

It marked the first time that the Defense Ministry has referenced Taiwan in its annual paper, according to Japan’s news agency, Kyodo News.

In the paper’s preface, Japanese Defense Minister Nobuo Kishi called the Indo-Pacific “the core of the world’s vitality” and noted that countering security challenges calls for a multilateral approach by nations with shared fundamental values.

“In particular, cooperation with the United States, our only ally, is of paramount importance,” Kishi wrote. “The alliance is the cornerstone of peace, security, and prosperity in the region, and we will strive to further strengthen its deterrence and response capabilities in order to further solidify the unshakable bond of the Japan-U.S. Alliance.”

Those bilateral ties have been reinforced in recent months through a series of diplomatic and defense engagements. In April 2021, Japanese Prime Minister Yoshihide Suga became the first foreign leader to visit U.S. President Joe Biden at the White House since the latter’s inauguration three months earlier. Additionally, just days before Defense of Japan 2021 was published, the armed forces of both nations participated in joint training exercises, including the bilateral Orient Shield 21-2 in Japan and the multilateral Pacific Vanguard, which also included military personnel from Australia and the Republic of Korea, off the coast of eastern Australia.

The white paper also spotlighted evolving security challenges in the cyber, space and electromagnetic spectrum domains, and Kishi noted the “grave and imminent threats” posed by North Korea’s missile development. Given its persisting expansionism and military buildup, however, communist China presents the region’s most looming threat.

Kishi pledged that Japan’s defense and military establishments would continue partnering with nations such as Australia, Canada, France, Germany, India, New Zealand, the United Kingdom and the U.S. to ensure the vision of a Free and Open Indo-Pacific.

“As the flag bearer of universal values in the Indo-Pacific region, joining hands with like-minded partners, we must cherish freedom, have faith in democracy, be deeply resentful at the failure to protect human rights, and resolutely oppose any attempt to change the order by coercion,” Kishi wrote.