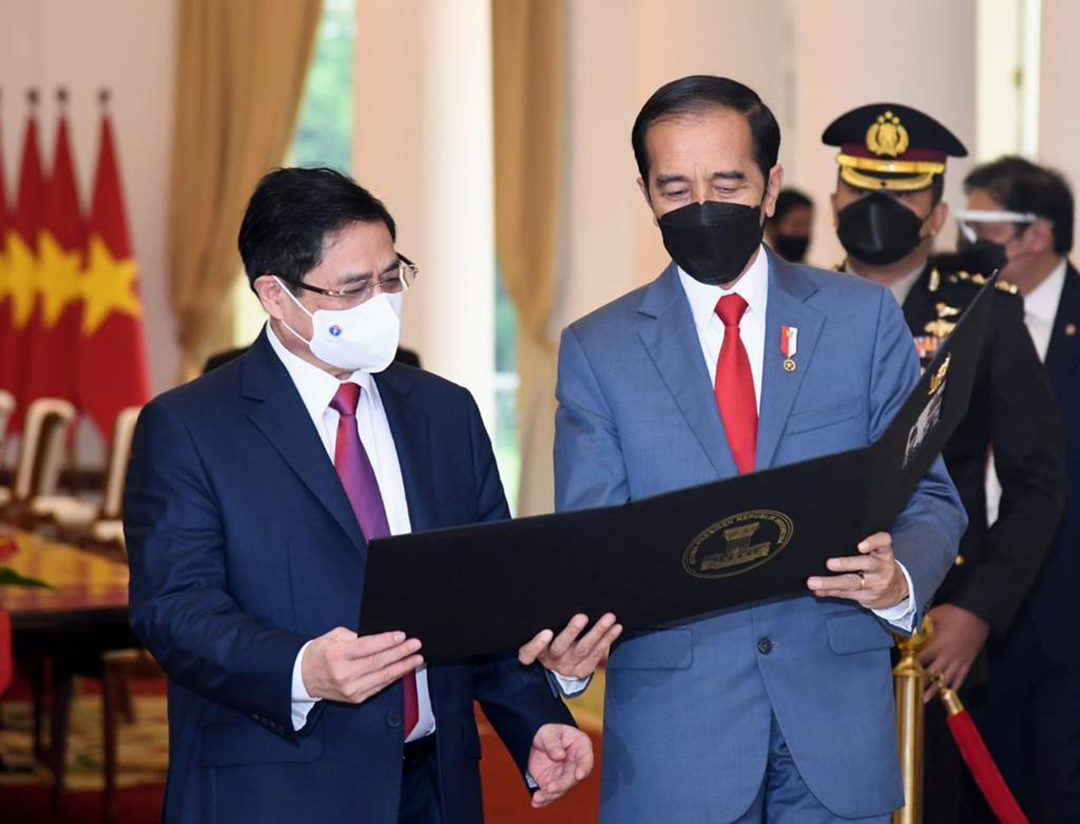 Even as the People’s Republic of China (PRC) continues its incursions into the exclusive economic zones (EEZs) of many Indo-Pacific countries, Vietnam and Indonesia are demonstrating a will to settle their own decades-old EEZ dispute. Numerous talks in recent years, including a meeting between Indonesian President Joko Widodo and Vietnamese Prime Minister Pham Minh Chinh in April 2021, indicate the two sides are nearing a solution. (Pictured: Vietnamese Prime Minister Pham Minh Chinh, left, and Indonesian President Joko Widodo meet in Jakarta, Indonesia, in April 2021.)

For decades, overlapping EEZ claims in the waters surrounding the Natuna Islands in the South China Sea have caused friction between Hanoi and Jakarta, according to Xuan Dung Phan, a researcher at the S. Rajaratnam School of International Studies in Singapore. A mutual desire to end disagreement over illegal, unreported and unregulated (IUU) fishing in the disputed waters is driving the two countries toward resolution, as is shared concern over Beijing’s aggression.

The nine-dash line is a demarcation used by Beijing to map its claims in the South China Sea, including within the EEZs of several countries. Beijing’s claims were ruled unlawful in 2016 by an international tribunal.

After meeting with Chinh, Widodo urged that technical teams from Indonesia and Vietnam restart EEZ delimitation talks and finalize the discussions, according to a statement from Indonesian Minister of Foreign Affairs Retno Marsudi.

Widodo and Chinh emphasized the need to conclude the talks as soon as possible so they can build a legislative framework to improve collaboration and eliminate IUU fishing, Vietnamese state media reported.

In 2003, Vietnam and Indonesia agreed on a continental shelf limit, although the EEZ between them in the North Natuna Sea is still disputed, Phan said.

“The issue has become protracted because of conflicting legal perspectives,” he explained. “Vietnam favors a single boundary for both the continental shelf and the EEZ. Indonesia insists on treating the EEZ and the continental shelf as two separate legal regimes and thus favors the equidistance principle as the method of demarcation. Reaching an agreement will require mutual understanding and accommodation from both sides.”

An appeal to international law may hold the key to such an agreement.

Disputes over EEZ borders between nations should be solved using international law, specifically the 1982 United Nations Convention on the Law of the Sea (UNCLOS), Marsudi said.

The parameters of EEZs are described in detail by UNCLOS, as are the rights, jurisdiction and duties of the coastal states within them. Indonesia and Vietnam repeatedly have declared their respect for UNCLOS in statements and multilateral agreements.