The Quickening Rise of Megacities Transforms the Nature of Warfare

Down streets darkened by dust and smoke and through narrow, shadowed alleys, the troops moved in teams, taking back the besieged town doorway by doorway, rooftop by rooftop. On the outskirts of town, the rotors of an MV-22 Osprey swirled dirt and debris as another contingent of liberators swarmed from the helicopter and headed into battle against enemy forces.

For more than three weeks, nearly 400 Soldiers and Marines from Australia, the Philippines and the United States engaged in urban operations training at the Australian Defence Force’s expansive Shoalwater Bay Training Area in Queensland. In reclaiming the simulated settlement, the troops tapped into skills and tactics sharpened during the mid-2019 trilateral exercise.

“Carabaroo is about learning from each other, building trust in each other, understanding each other’s different cultures and shared values and then bringing that together in a high-end combat scenario, probably the most complex of them all in urban warfare,” Australian Army Brig. Andrew Hocking, commander of the 7th Brigade, said in an article on the Australian Department of Defence website.

Throughout the Indo-Pacific and beyond, troops rehearse similar scenarios as military planners prepare for a new battlefield reality driven by population dynamics: the rise of megacities.

By 2050, more than two out of every three people worldwide will live in urban areas — a roughly 20% increase over the proportion of city dwellers in 2021. Within the next decade, the number of megacities of 10 million or more residents will jump by one-third, from 33 to 43. 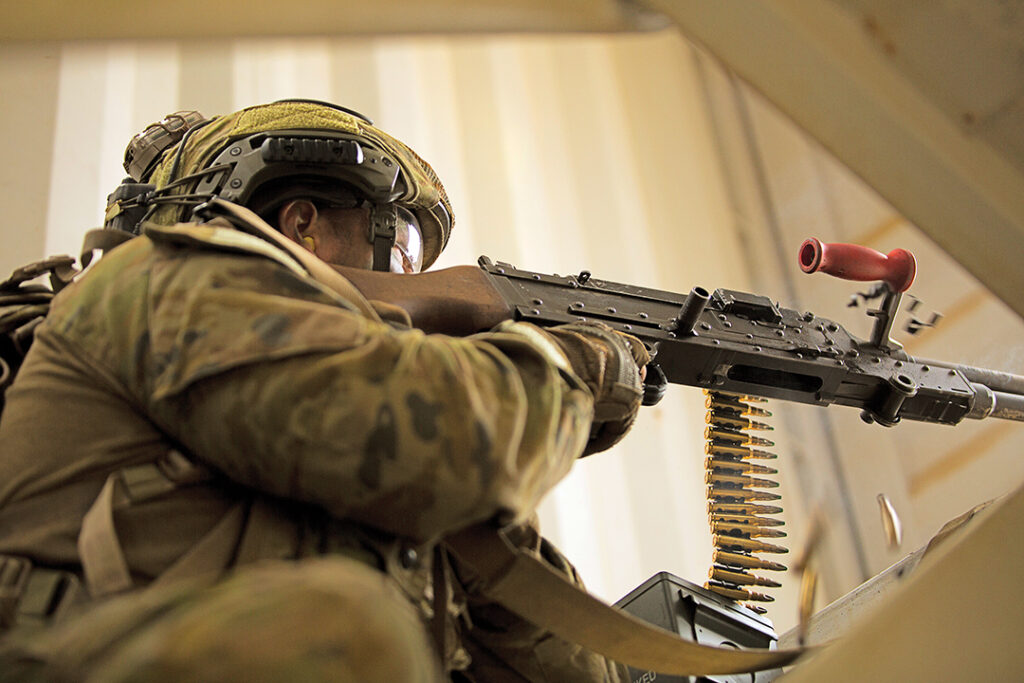 Much of that projected urban growth — which the U.S. National Intelligence Council has called a “tectonic shift” — will occur in the Indo-Pacific, a region already bulging with many of the planet’s metropolises, including Tokyo, New Delhi, Shanghai, Mumbai, Beijing and Dhaka.

“The city is the most powerful tool humanity has for social and economic development,” Antonio Sampaio, research fellow for conflict, security and development at the International Institute for Strategic Studies, wrote in a July 2018 article for Bloomberg CityLab. “High rates of urbanization are associated with many positive outcomes including higher income and lower infant mortality. This positive linkage is being threatened by the joint challenge of rapid urbanization and destabilization in some of the world’s most conflict-affected regions,” Sampaio wrote. “If aid donors, international organizations and armed forces don’t prioritize rapidly growing cities and work together to stabilize them, slow-burning tensions can escalate into violent conflict.”

Should such friction spark fighting, the density, complexity and interconnectedness of the world’s biggest population centers would present a combustible mix. “The challenge of megacities is unlike [anything] we’ve had to deal with in history,” according to Dr. Russell Glenn, director of plans and policy at the U.S. Army Training and Doctrine Command (TRADOC).

In many ways, the renewed focus on urban conflict can be viewed as a return to the past. From the campaigns of Napoleon through World War I, military studies emphasized battles on open ground free of civilians, according to a review of urban warfare published by Oxford University Press.

For much of history, however, urban warfare — often in the form of siege operations — had been the primary means of waging war. It began reasserting its dominance during World War II. In January 1944, as Allied forces prepared for D-Day landings and the eventual liberation of Nazi-occupied Europe, the U.S. War Department published its first formal urban warfare doctrine, Basic Field Manual (FM) 31-50: Attack on a Fortified Position and Combat in Towns. 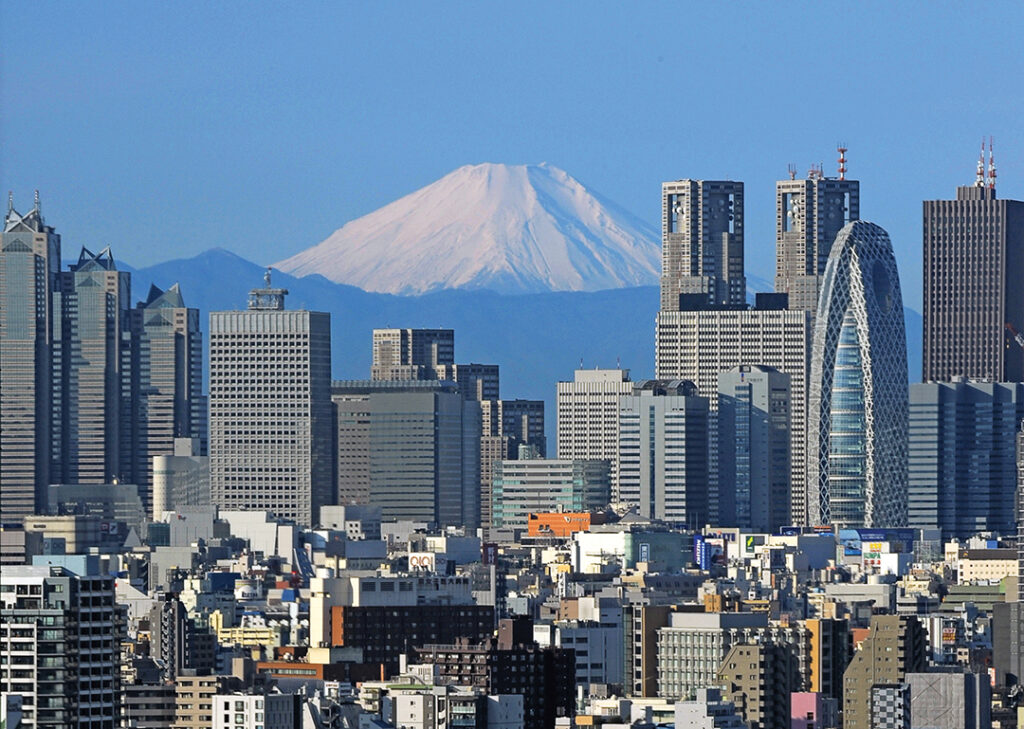 With an estimated 37 million residents, the greater Tokyo metropolitan area is home to nearly 30% of Japan’s population and is the world’s most populous megacity. AFP/GETTY IMAGES

Various factors have spurred the reemergence of urban warfare’s strategic importance. Among them, the 2017 Oxford University Press review noted: “The search by less powerful armies for an asymmetric advantage among the urban population and landscape, the increased emphasis on revolutionary (insurgency) warfare, and dramatic global population demographic shifts from rural to urban geography.”

The seismic reconfiguration of the world’s population predicted for the coming years — defined as a “megatrend” by the United Nations — promises to reshape military thinking at every level from equipment and training to tactics and strategy. Australia’s 2020 Defence Strategic Update, unveiled in July 2020, noted that population growth and urbanization are compounding threats to political stability, such as food and water scarcity and pandemics.

Australia’s military “must have the ability to have a persistent ground presence, operate in complex terrain, and defeat adversaries through close combat,” noted the companion 2020 Force Structure Plan.

Given the nature of the modern battlefield, Australia’s Defence Department announced it would establish “a contested urban environment research office” to coordinate the development and rapid implementation of “constantly evolving combat equipment.” Additionally, the Force Structure Plan highlighted the vital role of geospatial intelligence, or GEOINT, in creating 3D models of urban areas to aid deployment of precision-guidance weapons.

A 2017 report by the Rand Corp., “Reimagining the Character of Urban Operations for the U.S. Army: How the Past Can Inform the Present and Future,” gleaned several key findings from analyzing such conflicts, including:

The role of armored ground forces in allowing freedom of movement and “shrinking the operational problem of a large urban area down to a neighborhood.”

The need for “innovative forms of intelligence, including new sources and methods of collection, particularly open source information from nonmilitary sources.” 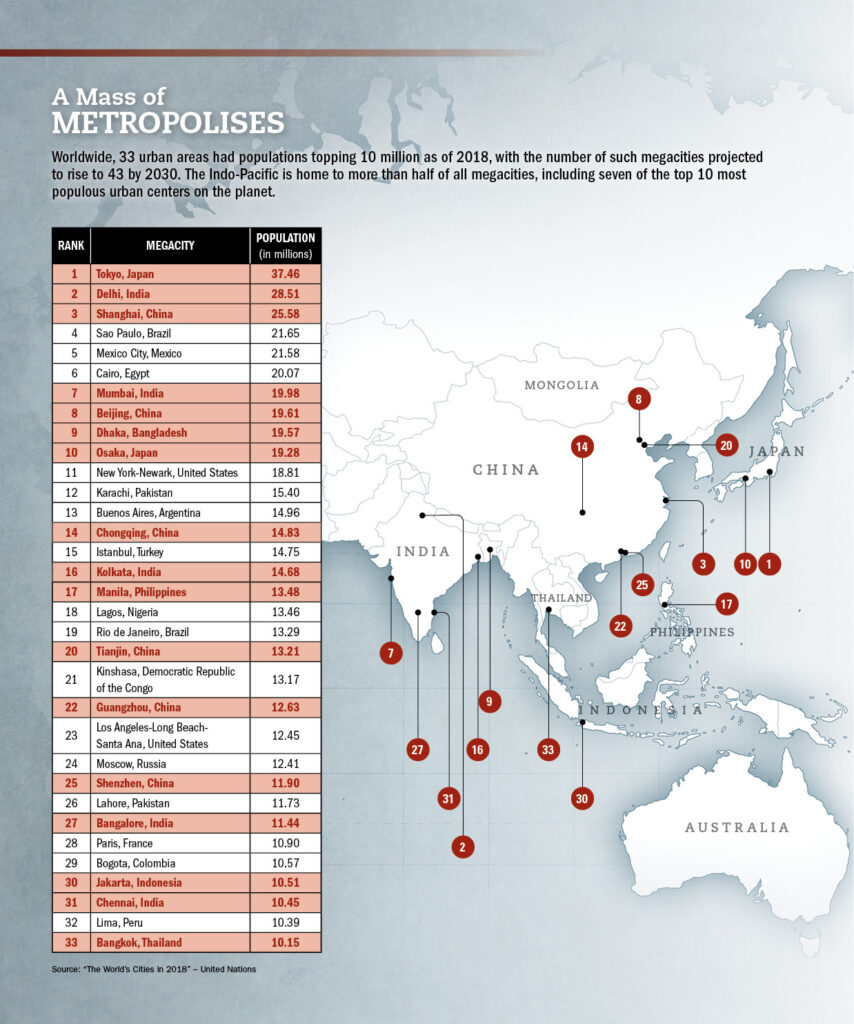 The value of military leaders who can think beyond established methods and operational norms to reduce “the challenge of urban combat to a manageable scope.”

“Urban environments pose significant challenges for ground forces and have traditionally been avoided when at all possible, but increasing urbanization of the world’s population seems to ensure that urban combat is in the Army’s future,” noted the TRADOC-sponsored report.

Indeed, the U.S. Army’s then-chief of staff had spoken of that looming likelihood a year earlier.

The future battlefield, Gen. Mark Milley told the Association of the U.S. Army in 2016, will be “almost certainly in dense urban areas, and against elusive, ambiguous enemies that combine terrorism and guerrilla warfare alongside conventional capabilities mixed with large civilian populations.”

It will be an arena far removed from the rural battlefields for which the Army historically had been “designed, manned, trained and equipped,” said Milley, who in October 2019 was appointed chairman of the Joint Chiefs of Staff, the nation’s highest-ranking military officer.

A subsequent Rand report, “The U.S. Army and the Battle for Baghdad: Lessons Learned — And Still to Be Learned,” gave impetus to such considerations, noting that the multiyear, multiphase conflict in Iraq “provides a wealth of information about how to reimagine future urban combat.”

The 2019 U.S. Army-sponsored report outlined a slate of recommendations, including a call for military planners and leaders to continue studying “the broader question of urban operations and megacities but understand that, because each city is an independent entity, studies should focus on specific cases of where the Army might be engaged in urban combat and what types of adversaries it will likely face.”

A CRUSH OF CHALLENGES

Beyond a crush of humanity, whether packed into sprawling slums or sleek skyscrapers, what might armies encounter in the world’s megacities? Transportation systems — at, above or below street level — may be efficient or overwhelmed. Municipal governments and civil authorities might provide stability and support or, simply, corruption and chaos. Certainly, tens of millions of smartphones and digital devices will create a cacophony of electronic noise that could swamp networks and disrupt battlefield communication and navigation.

For the adversary, “mega-urban terrain will be a great equalizer,” Alex Ward, assistant director of the Brent Scowcroft Center on International Security, wrote in The National Interest magazine. 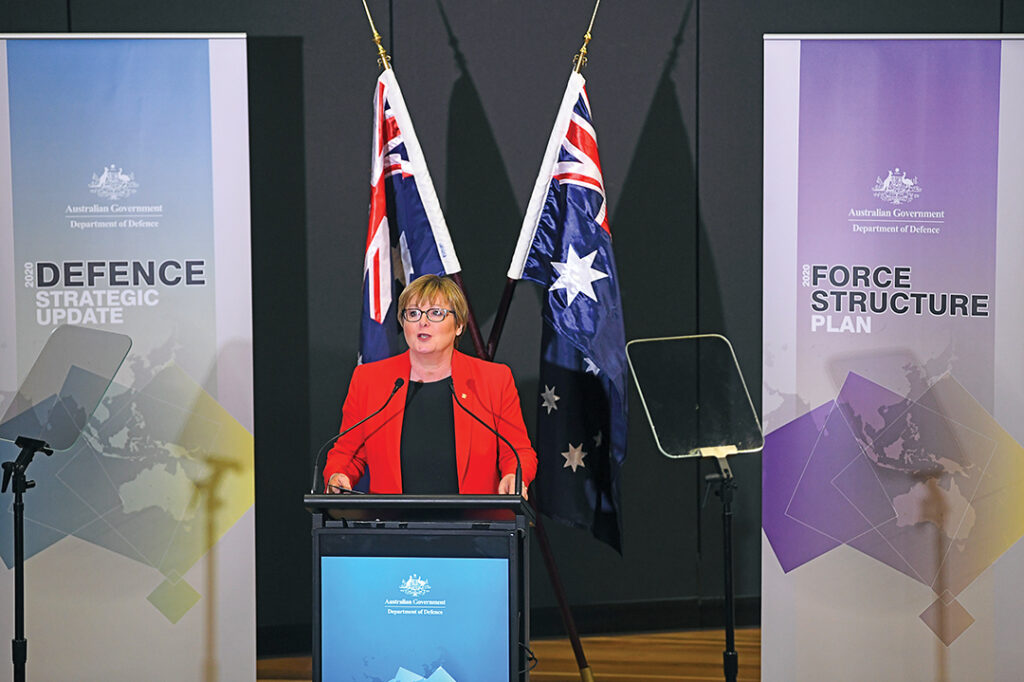 This punishing, on-the-ground reality demands that troops be equipped for a unique battlespace. Beyond light weapons for increased agility, Ward wrote, forces will require command, control and communication systems that are difficult to intercept, sensors and surveillance cameras, and 3D printing and visualization tools. With many megacities situated in littoral zones, amphibious capabilities also will be vital to military success.

It is essential, too, Ward noted in his 2015 article, that company and battalion leaders be trained to make “split-second decisions in ambiguous circumstances” while balancing a city’s regional and cultural dynamics.

In the information age, victory on the battlefield also requires a fighting force that can overmatch the enemy in the cognitive domain, according to U.S. Army Col. Todd Schmidt. “We must be able to gather, decipher, process, and understand tremendous amounts of data and information faster than an adversary,” Schmidt wrote in an April 2020 article for the Modern War Institute at West Point. “This capability must be fused with advanced technological capabilities — such as cloud-enabled computing, robotics, artificial intelligence, and virtual or augmented reality — and the ability to communicate the knowledge we derive from the data internally and externally faster than our enemy.”

Reflective of this growing nexus between urbanization and security, Katoch noted that militaries from Europe to the Mideast and beyond have established synthetic training environments that mimic high-rise apartments, stores and marketplaces, schools and other public buildings. Some of these military operations on urban terrain, or MOUT, facilities are constructed of modular systems that resemble oversized Legos and can be rapidly reconfigured and customized. 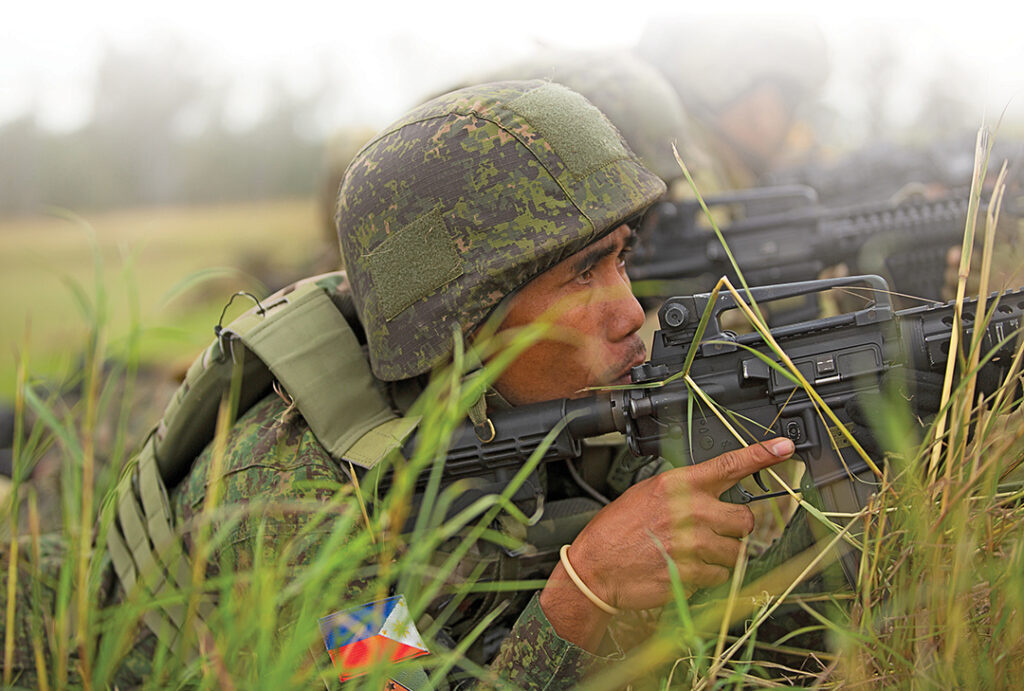 A Soldier of the Armed Forces of the Philippines participates in an assault on a fictional town during Exercise Carabaroo 2019. CPL. DESTINY DEMPSEY/U.S. MARINE CORPS

Further complicating military planning for urban conflict is the role of cities as “centers of gravity” — hubs of finance, governance, industry, communication and transportation, according to “A Concept for Future Military Operations on Urbanized Terrain,” a 1997 report by the U.S. Marine Corps Combat Development Command. Armed forces may find themselves simultaneously conducting combat operations, peacekeeping functions and humanitarian assistance in different neighborhoods — a military concept known as the “Three-Block War.”

Nearly a quarter century after that report, ensuring readiness for urban warfare remains a fast-moving target. The U.S. Marine Corps Warfighting Laboratory in 2019 began soliciting information from defense companies and academic institutions for the development of weapons technologies and other systems for a multiyear series of experiments to sharpen city-combat capabilities, Military.com reported.

A CUE FOR ACTION

Participants tested next-generation technology such as air- and ground-based sensors integrated with perimeter and overhead surveillance systems to identify enemy-occupied vehicles and structures and to detect movement inside and around buildings.

“Our aim is to give our men and women on the front lines useful technology that produces timely, high-caliber information,” Dr. Justin Fidock, group leader of human domain analytics with Defence Science and Technology, part of Australia’s Defence Department, said in a 2018 podcast about the exercise. “They need to be confident they know what they’ll be facing when they step onto a street or into a room in a contested urban environment.”

Two years after the inaugural event, the annual CUE Strategic Challenge moved to New York City, a metropolis of 8.5 million residents on the cusp of megacity status. More than 150 engineers and scientists from the five member nations descended on the city for two weeks of testing emerging technologies.

The 40 projects tested focused on analytics, force protection, reconnaissance and surveillance, command and control, and counter-unmanned aircraft systems. In one experiment, engineers from Australia and the U.S. teamed to develop a robotic platform that can navigate and map spaces autonomously — or guided by a Soldier’s hand and body movements. Augmented reality allows human operators to see what the robot sees.

“The overarching objective of CUE is to get greater insights into the nature of urban challenges and increase our understanding of the limitations of technologies that support operational concepts,” Mary J. Miller, principal deputy, director of defense research and engineering for research and technology, U.S. Department of Defense, said in the 2019 article. “Ultimately,” Miller said, “we will use this information to create capabilities that increase mission success while reducing risk to our military forces in urban operations.”