Amid its devastating cost in lives and livelihoods, the coronavirus pandemic has also revealed a strength. It highlighted the power and resilience among communities that recognize their connectedness and cultivate rich relationships.

The U.S. Agency for International Development (USAID), the U.S. Defense Department’s Overseas Humanitarian, Disaster, and Civic Aid (OHDACA) program and U.S. Indo-Pacific Command (USINDOPACOM) bear testimony to this. The partnerships among them and Indo-Pacific nations and organizations allowed a nearly seamless pivot to meet regional challenges and responses to the coronavirus pandemic.

U.S. government representatives credit the swift shift in focus and resources to their enduring presence in the region and long-standing disaster response exercises and exchanges with partner nations. A level of trust and understanding about the way each component communicates was already established, making it easier for host nations to request assistance from USAID, OHDACA and USINDOPACOM. 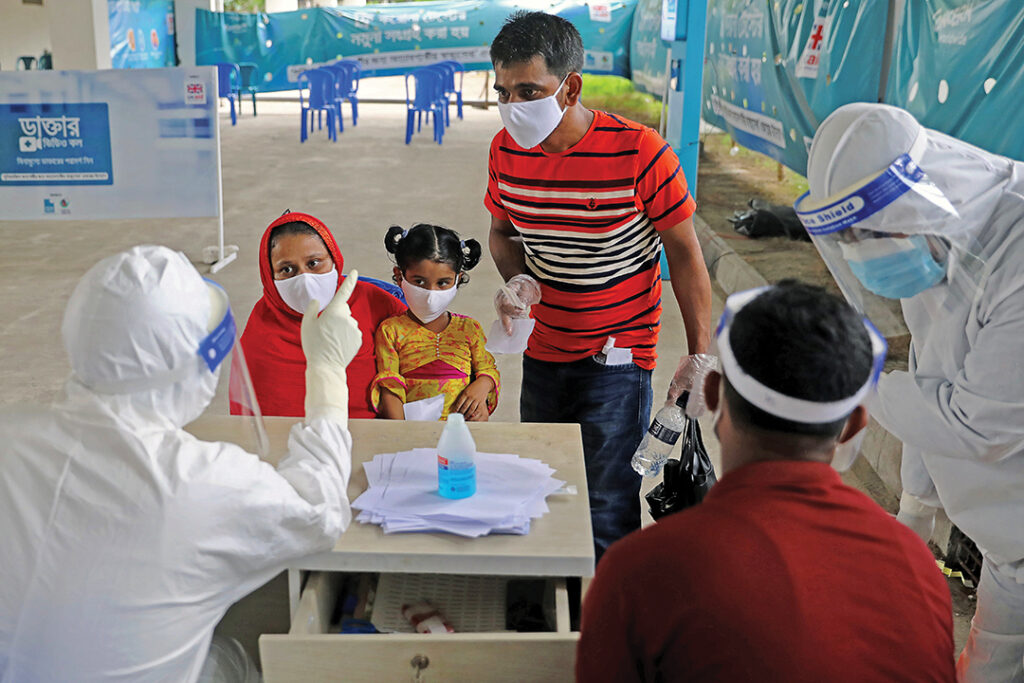 Family members discuss their upcoming COVID-19 tests with a doctor at Mugda Medical College and Hospital in Dhaka, Bangladesh. The U.S. is supporting Bangladesh’s efforts against COVID-19.
REUTERS

As the coronavirus spread, USAID in February 2020 performed an analysis of countries worldwide to decide which might be most at risk and began to secure funding to provide assistance. “As time went on, we realized all countries were going to be affected by this,” Miller said.Coordination with USINDOPACOM components U.S. Army Pacific (USARPAC) and Special Operations Command Pacific (SOCPAC) helped USAID bolster its mission and expand capacity to respond to the virus.

“Through USAID civilian military coordinators in the region, USAID already has a natural and effective relationship with USARPAC and SOCPAC teams, built on trust and open communication,” Miller said. “This relationship facilitated the prompt identification of priority needs and the thorough design and implementation of OHDACA-funded projects that responded to critical needs that USAID’s funding could not meet.”

USAID remains committed to assisting the world’s most vulnerable countries, including 28 countries in the Indo-Pacific region with more than U.S. $145 million of health, humanitarian and economic support funds, in addition to over 2,000 ventilators. 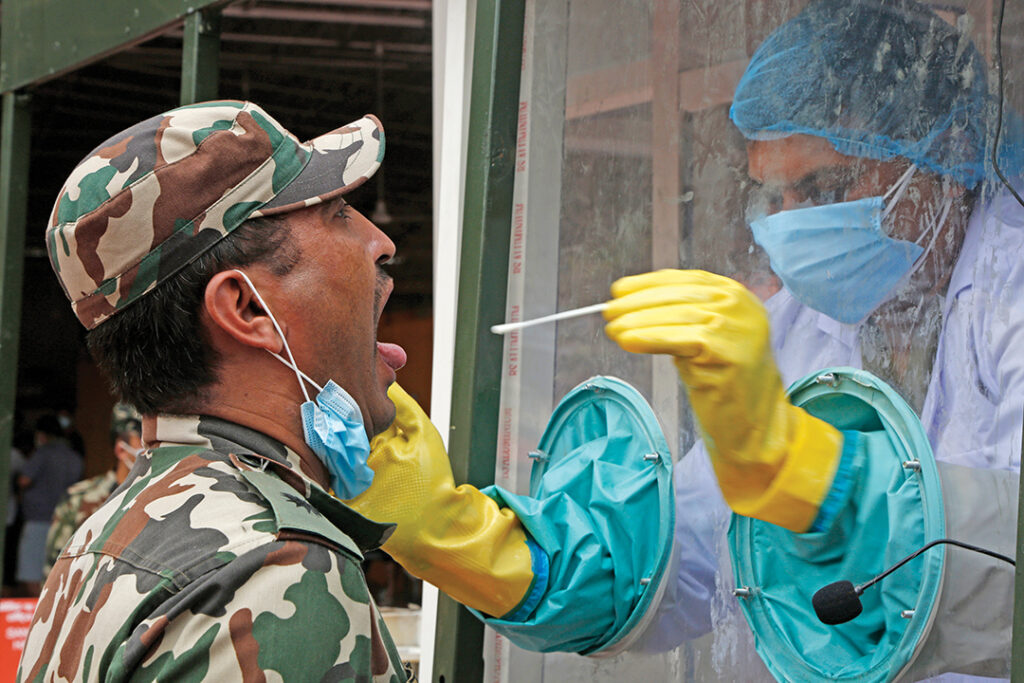 A health worker collects a sample from a Nepalese Soldier for a COVID-19 test in Kathmandu, Nepal, in July 2020. THE ASSOCIATED PRESS

‘IT’S NOT BUSINESS AS USUAL’

The implementation of social distancing measures has meant reinventing how U.S. government agencies operate in the region in the near and long term.

“It’s not business as usual,” Lt. Col. Mark Mudrinich, a USARPAC Oceania team lead, told FORUM. “We’re looking at innovative ways to conduct training. A lot of future engagement USARPAC will do is created virtually. We’re continuing to assist with projects and work hand in hand with USAID. We’re ensuring that we take extreme cautions with our partners and allies.”

That includes periods of quarantine to ensure U.S. Soldiers deployed to the region are virus-free before engaging with locals.

“Once COVID hit, it restricted our ability to work with any host-nation counterpart,” Lt. Col. Jason Hanson, branch chief for civil affairs at SOCPAC, told FORUM. “Exercise exchanges and training exchanges normally taking place had to shut down. That made it difficult for us to engage with our counterparts.”

In a lot of situations, it can prove difficult for force providers and militaries to maintain heel-to-toe continuity in country, Hanson said. That’s why CMSEs on the ground are so important, he said, as was making sure those positions did not go unfilled as routine rotations occurred in the midst of the pandemic.

“If those positions had gone gapped, the risk of inaction would be high and would be alarming,” Hanson said.

It would prove difficult for U.S. personnel to deploy to a host nation and try to establish a relationship that had been temporarily severed. “But because we do have heel-to-toe rotations there, the partnership is manicured,” Hanson said.

U.S. Soldiers and personnel conduct daily or weekly virtual visits as in-person meetings have been restricted.

To prevent gaps in those relationships, rotational teams extended in-country deployments for two to three months because of restrictions getting replacements.

“Instead of sending the team home and gapping it, which was the biggest risk for us, we wanted to extend the team already in country,” Hanson said. “We realized the importance of continuing the relationship.”

USAID evacuated at least 50% of its foreign service officers in the region due to coronavirus, and “that’s been a challenge,” Miller said. However, because USAID representatives have a more permanent presence in the region — and strong partnerships with nongovernmental organizations that remained in country — USAID maintained a high level of effectiveness despite its shift in personnel presence.

THE JOURNEY TO SELF-RELIANCE

Mudrinich said that when it comes to disasters in the Indo-Pacific, “it’s not if, but when they get hit.” That mindset has aided the region’s resilience to face challenges brought on by the coronavirus. It’s that spirit of resilience that will also aid long-term recovery efforts.

U.S. officials have begun transitioning pandemic relief into recovery that ultimately converts full control of the way forward to the host nation.

“USAID is working to achieve greater development outcomes so that one day, foreign assistance is no longer necessary. This is called the journey to self-reliance,” Miller explained. As partners on this journey, USAID and the host nation government work to strengthen the country’s ability to plan, finance and implement solutions to challenges. Even during the pandemic, this remains as important as ever.

USAID, OHDACA and USINDOPACOM have paid particular attention during coronavirus response to advancing peace, security and gender equality. In Timor-Leste, for example, U.S. agencies provided funding for PPE produced by local female-owned businesses. Seeking out rural recipients also injected money into the economy and provided women with transferable skills, according to Miller and Mudrinich.

USINDOPACOM’s J91 (Mil-Civ Outreach) OHDACA team coordinated, staffed and approved 165 project nominations worth over U.S. $12 million with USAID, U.S. country teams, security cooperation officers (SCOs), USARPAC, SOCPAC, Defense Security Cooperation Agency (DSCA) and the Office of the Deputy Assistant Secretary of Defense for Stability and Humanitarian Assistance to support partner nation efforts to mitigate and respond to the effects of COVID-19. U.S. military personnel in country, including civil affairs teams and SCOs, specifically targeted these projects by working with and through partner nation civilian agencies to execute high-impact projects at a relatively low cost to fight COVID-19 in the theater.

“This effort has clearly shown the value and ability of the J9 and interagency team to synchronize and execute command priorities from the tactical level all the way up to USINDOPACOM and DSCA,” said Maj. Jim Towle, OHDACA program manager.

Tied to all this is messaging — the message that the U.S. has a vested interest in the region as an enduring partner and respecter of sovereignty. It’s therefore important that U.S. assistance packages carry the partner nation’s flag, Hanson said. “If these donations only had a U.S. flag, I think we would be missing our mark,” Hanson said.

The goal, he said, is always to emphasize the partnership. Doing so builds a community’s confidence in its government and military. “That’s really good messaging,” Hanson said. “It demonstrates to a community that not only has our country taken care of us, but they also have a strong partnership.”

Hanson recalled a coronavirus relief distribution center in Nepal, where on one side of the room, 100 boxes of donations carried the U.S. and Nepali flags side by side. “And on the other side of the room, three or four boxes from China,” Hanson told FORUM. “That registered immediately with a lot of people. It registered with the partner nation.”

Beyond the immediate response to the pandemic, Hanson said it’s important to have a lasting impact. It’s one thing to provide PPE such as disposable masks that might be worn for a day. The U.S. also provides hospital beds and ventilators, items that help the host nation on its road to recovery and remind recipients of the U.S. government’s long-lasting commitment to the region. “We want to be the partner of choice,” Hanson said.