In its 55 years of independence, the island nation of Singapore has grown from a colonial outpost into a prosperous powerhouse of global trade and finance — a flourishing manifested in its neck-craning skyline.

Regularly among the world’s top 10 for per-capita gross domestic product, the city-state is home to Southeast Asia’s largest port and exports goods ranging from electronics to pharmaceuticals and medical devices. Its educated, productive populace, which has tripled to 5.7 million since 1965, enjoys a high standard of living.

What has stayed largely unchanged over the past half-century, however, is the nature of the land itself — 720 square kilometers of mostly hardscrabble terrain unsuitable for crops.

“Singapore has never quite been an agricultural nation by virtue of our limited arable land,” Kee Ai Nah, an executive director with the government’s development agency, Enterprise Singapore, wrote in 2019. “Today, only 8% of the vegetables we consume are produced in local farms, making us highly dependent on food imports.”

Even for this resourceful country that produced an economic miracle, ensuring that it can feed its people remains a mammoth undertaking, one with implications not just for food security but also national security.

It is a reality faced across the Indo-Pacific, a truth made worse by the grinding spread of a pandemic that has left crops to wither and supply chains to stall amid lockdowns while pushing people out of work and into poverty — and the prospect of hunger. 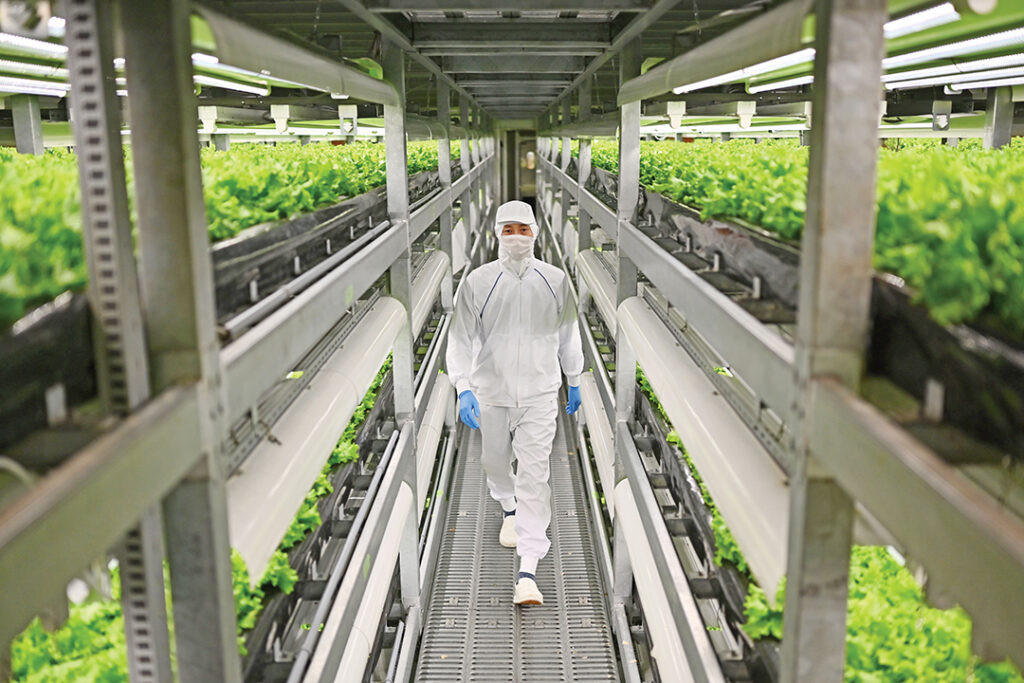 In March 2020, for example, Vietnam temporarily halted rice exports due to COVID-19 fears. Trailing only India and Thailand in rice exports globally, Vietnam exported 6.37 million tons of this staple food worth U.S. $2.8 billion in 2019 to markets including China, Malaysia and the Philippines, the Vietnamese newspaper VnExpress International reported.

Facing a food security dilemma, many nations, like Singapore, are finding answers in regional partnerships and the blossoming promise of technology.

“One of the greatest global development challenges that wealthy and poor countries face together is increasing agricultural production to meet shifting consumer preferences and a growing population while using less water and fewer hectares and managing the unpredictable effects of climate change,” Kimberly Flowers, director of the Global Food Security Project at the Center for Strategic and International Studies, wrote in an essay for the Washington, D.C., think tank.

Worldwide, nearly 690 million people, or about 9% of the planet’s population, went hungry in 2019, more than half of them in Asia, according to a July 2020 report by the United Nations. The coronavirus outbreak could push that number above 820 million by 2021, further casting doubt on the U.N.’s goal to “end hunger, food insecurity and all forms of malnutrition” by 2030.

“The report warns that if the trends in the past few years continue, we will be moving away from zero hunger rather than towards it. This is highly worrying,” Johan Swinnen, director general of the International Food Policy Research Institute (IFPRI), said in an article on the agency’s website. “What’s even more worrying is … that COVID-19 is making matters much worse for the poorest people in the world.”

Long viewed as a potent catalyst for civil unrest and conflict, food insecurity may be one of the 21st century’s most intractable problems, one already exacerbated by a growing population and mass human migration even before the deadly virus struck.

Factors such as disrupted production and transportation and weak purchasing power likely will increase the risk of food insecurity through the mid-2020s, the U.S. Office of the Director of National Intelligence (DNI) forecast in its 2015 intelligence community assessment “Global Food Security.” 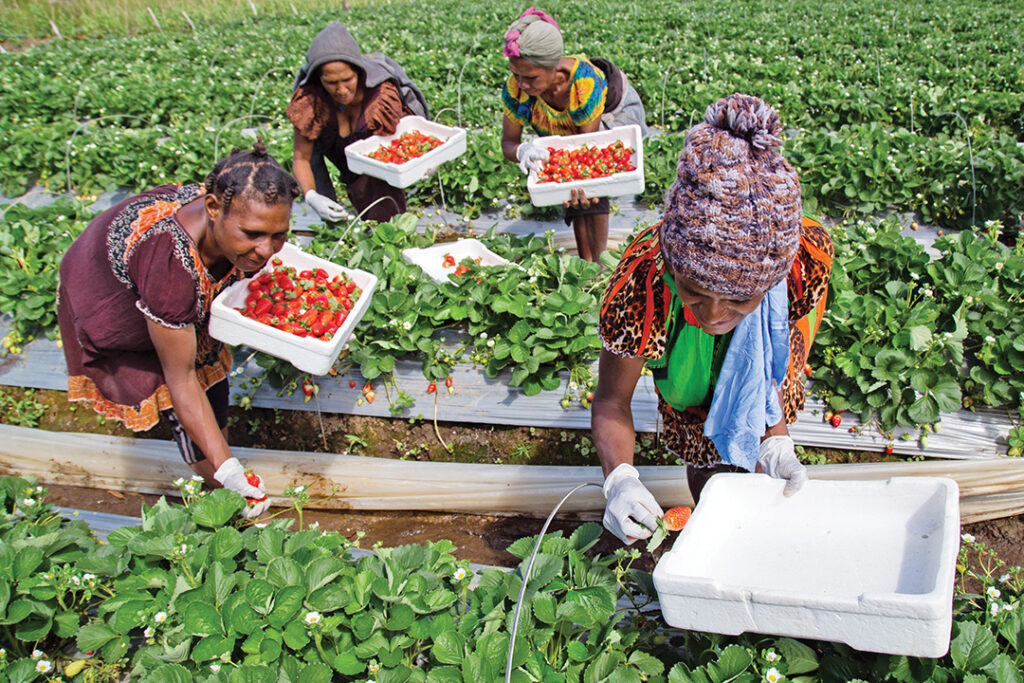 In Papua New Guinea, government agencies and the International Food Policy Research Institute are analyzing the production, pricing and consumption of strawberries and other crops to help communities respond to fluctuating food supplies. AFP/GETTY IMAGES

“In some countries, declining food security will almost certainly contribute to social disruptions and political instability,” the DNI noted.

Lack of food can prompt mass relocations, whether within or across national borders, as the hungry go in search of sustenance. In sowing discord and disaffection among the populace, hunger may be at the root of extremism and violence. Such unrest, in a vicious cycle, further undermines food security by hindering trade and overwhelming civil authorities.

In a study published in Stability: International Journal of Security and Development, researchers found that a large increase in the number and severity of armed conflicts around the globe in 2011 “closely followed spikes in international food prices — in late 2010 and early 2011.”

Across the globe, Flowers noted in her 2016 essay, “escalating and volatile food prices have resulted in urban riots, toppled governments, and regional unrest.”

Dynamic demographic shifts and gender disparities, particularly in the Indo-Pacific, are raising the stakes, according to the U.S. National Intelligence Council.

“Insufficient natural resources — such as water and arable land — in many of the same countries that will have disproportionate levels of young men increase the risks of intrastate conflict breaking out, particularly in Sub-Saharan African and South and East Asian countries, including China and India,” the council reported in “Global Trends 2030: Alternative Worlds.”

Fighting hunger in the Indo-Pacific calls for collaborative projects and substantial spending in areas such as rural infrastructure, irrigation, and agricultural research and development, according to an October 2019 report by IFPRI. Over the next decade, annual agricultural investments must double, to almost U.S. $79 billion, if the region is to achieve the U.N.’s per-capita hunger threshold of 5%, the Asian Development Bank-commissioned report found.

The cost of failure, too, would be immense.

In the archipelago nation of Indonesia, the world’s fourth largest by population, almost one-third of its
267 million people are employed in the agriculture sector, which is vital to Southeast Asia’s biggest economy. Although Indonesia has made significant strides in boosting production through measures such as high-yielding rice varieties and fertilizers, the sheer scale of its population growth continues to stretch resources, according to IFPRI. 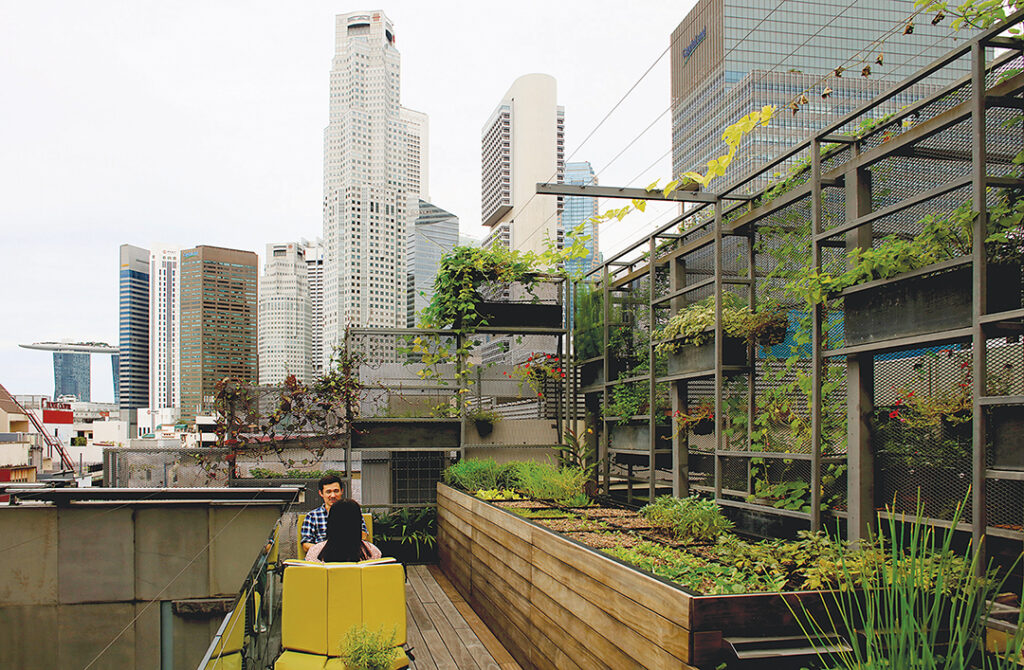 Singapore’s “30×30” goal calls for the city-state of 5.7 million people to meet 30% of its nutritional needs with locally produced food by 2030. Reuters

“Food security is one of the national development priorities,” researchers noted in a supplemental analysis to the institute’s 2019 report, which recommended steps ranging from fostering participation by youth and entrepreneurial farmers to greater adoption of “precision agriculture” through use of satellites, sensors and digital technology.

Regional efforts to bolster food security gathered pace at the beginning of the millennium, when the 10 member states of the Association of Southeast Asian Nations (ASEAN) joined with Japan, the People’s Republic of China and South Korea to establish the ASEAN Food Security Information System (AFSIS).

The initiative seeks to improve the collection, analysis and dissemination of data to build information networks that provide early warnings and commodities projections so member nations can better manage food security threats and emergency reserves.

The battle to eradicate hunger in the Indo-Pacific is fortified by U.S. resources and expertise. Since the infancy of the Cold War era, the United States has been the world’s biggest provider of food assistance, serving more than 4 billion people in over 150 countries through the U.S. Agency for International Development (USAID) Office of Food for Peace.

USAID provided more than U.S. $4.4 billion in development and emergency food assistance in fiscal year 2019, including food donations, vouchers, cash and locally purchased commodities, according to its website. The agency’s Famine Early Warning Systems Network can predict food assistance needs up to eight months in advance of an emergency, speeding humanitarian aid response.

Such efforts by the U.S., ASEAN and like-minded partners are saving lives and seeding peace.

“If food insecurity is a threat multiplier for conflict, improving food security can reduce tensions and contribute to more stable environments,” researchers Cullen Hendrix of the University of Denver’s Korbel School of International Studies and Henk-Jan Brinkman of the U.N.’s Peacebuilding Support Office wrote in their 2013 study published in the journal Stability.

In fields and paddies throughout the Indo-Pacific, advances in science and technology are allowing farmers and growers to reimagine their vocation from planting season to harvest time, while underpinning local and regional food security.

In northwest Bangladesh, USAID’s Feed the Future initiative collaborated with partners including Cornell University to introduce a pest-resistant eggplant variety that drastically reduced crop infestation and toxic pesticide use. In 2018, eggplant farmers saw their yields leap by 42% and their per-hectare profits increase by U.S. $400.

In the drought-prone district of Kalahandi, India, scientists with the International Crops Research Institute for the Semi-Arid Tropics partnered with the Power Grid Corp. of India Ltd. to implement a rainwater management system, including construction of 32 farm ponds in seven villages as of mid-2020. Soil health mapping revealed degradation and deficiencies that research teams countered with nutrients and improved crop varieties, generating greater yields, the institute reported.

The crops research institute also is working with scientists in Australia and India on a genome-sequencing project to boost drought tolerance in chickpea, a food rich in protein, fiber and iron, among other nutrients.

In Papua New Guinea, IFPRI researchers are teaming with government agencies to develop a digital database to analyze food production, pricing and consumption, which will allow communities to better respond to fluctuating food supplies.

The Philippines-based International Rice Research Institute, in conjunction with a consortium of scientists from the Americas and Europe, is developing disease-resistant rice varieties. The partnership also led to the creation of a diagnostic kit for rapid detection of pathogens such as the potentially devastating bacterial blight.

Such investments in research and development enhance agricultural yield and production, IFPRI noted in its 2019 report. That, in turn, lowers food prices, raises household incomes, increases food availability “and consequently reduces the number of malnourished children and hungry people.”

LOOKING TO THE SKIES

For many Singaporeans, the high level of living they enjoy on their densely populated island is also literal. Ranked 191st globally by land area, the city-state has built thousands of high-rise blocks to maximize its minimal real estate; today, these owner-occupied units are home to about 80% of the population.

In recent years, Singapore has started taking the same approach to farming as it has with housing: It has gone vertical.

Describing itself as the first low-carbon, hydraulic-driven vertical farm in the world, Sky Greens began commercial operations in 2012 with the goal of “ensuring food supply resilience … to land-scarce” locations such as Singapore. The award-winning, public-private endeavor grows cabbage, lettuce, spinach and other vegetables on aluminum A-frames up to 9 meters tall. Each frame has dozens of rotating tiers that allow plants to get enough light, water and nutrients indoors year-round.

Flowing water combined with gravity generates the rotation, cutting each tower’s electricity needs to the equivalent of one light bulb, according to Sky Greens’ website. The water that powers the hydraulic system is recycled for irrigation.

More than 30 indoor vertical farms have sprouted around the island, a fivefold increase in just a few years, according to Enterprise Singapore. With advances in artificial intelligence, smart sensors and other digital technology — plus investment by agri-tech startups and multinational conglomerates alike — the nation’s indoor agriculture industry is projected to jump almost 20% annually through 2023.

As it has done in the fields of trade and finance, Singapore seeks to become the next great hub of urban farming. In September 2020, the Singapore Food Agency announced almost U.S. $40 million in grants for nine high-tech urban farms as part of the nation’s “30×30” goal to meet 30% of its nutritional needs with locally produced food by 2030.

“There is urgency for us to accelerate local production to reduce our reliance on imports and provide a buffer during supply disruptions, amidst the COVID-19 pandemic,” agency CEO Lim Kok Thai said in a statement. “We will continue to work with the agri-food industry and support them to grow more and grow faster to enhance our food security.”