Declining fertility rates and improved health care are creating a global aging phenomenon that is straining entitlement programs, slowing economic growth and raising security questions. Nowhere is this societal graying more acute than in the Indo-Pacific, which is home to the world’s oldest country by percentile — Japan — where 28% of the population is 65 or older. That means for every person between the ages of 20 and 64, there is one person over 65, or roughly 35.2 million people over the age of 65 in Japan.

The region’s dwindling number of working- and military-age citizens may strain government budgets and turn militaries toward technology to compensate for shrinking ranks, experts predict. Facing its most precipitous population decline in decades, the People’s Republic of China (PRC) harbors more than 176 million people age 65 or older or roughly 12.6% of its population, yet the PRC extended its reach in the South China Sea, militarized shoals claimed by its neighbors, and built runways and weapons installations to defend them. Such actions by a country facing future gross domestic product (GDP) declines and bankrupt pension funds might seem counterintuitive.

“What we see is that if perceived threats are sufficiently high, even aging countries are willing to do what it takes to invest in defense,” said Dr. Jennifer Sciubba, the Stanley J. Buckman professor of international studies at Rhodes College in Memphis, Tennessee, and a global fellow with the Environmental Change and Security Program at the Wilson Center in Washington, D.C. 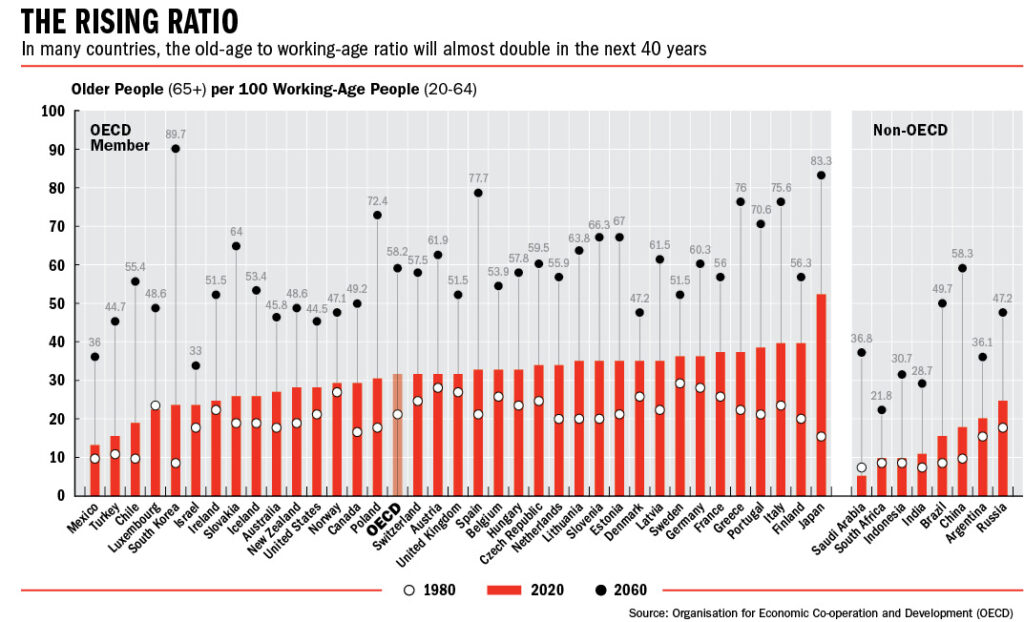 Sciubba told FORUM that the Indo-Pacific’s aging patterns, though costly, have not curbed appetites for defense spending. In fact, the region’s leaders seem more likely to invest in protecting their resources and territories as their populations age. “The Indo-Pacific is a tense region with a lot of competing powers, even though those powers are experiencing intense population aging. Japan is the world’s oldest country in terms of median age,” she said.

THE END OF THE BOOM

The world was inhabited by 703 million people over the age of 65 in 2019, according to an October 2019 report by the United Nations Department of Economic and Social Affairs. East Asia and Southeast Asia are home to the world’s largest population in that age group — 261 million people — followed by Europe and North America.

Those parts of Asia, which include the world’s most populated country, China, will see their populations of seniors grow to 573 million by 2050, the U.N. report states. This increase will be coupled with China’s largest population decline in decades, setting the stage for a rapidly intensifying set of challenges.

• Shrinking Workforce: Government researchers at the China Academy of Social Sciences predict that the nation’s population will peak at more than 1.4 billion by 2029 and then experience an “unstoppable” decline that could see it drop to 1.36 billion by 2050, reducing the workforce by as much as 200 million. “From a theoretical point of view, the long-term population decline, especially when it is accompanied by a continuously aging population, is bound to cause very unfavorable social and economic consequences,” the academy said in a 2019 report. India is expected to surpass China as the world’s most populous country as China’s contraction begins.

• Vanishing Pensions: An April 2019 report by the same think tank said the PRC’s state pension fund will run dry by 2035. Pensions are already straining government budgets. Pension payouts reached 640 billion yuan (U.S. $90 billion) in 2016, up 140% from five years earlier. Analysts suggest this figure could rise as high as 60 trillion yuan annually by 2050, accounting for more than 20% of total government spending, according to a September 2019 report in The National Interest magazine. This budget strain will occur despite the PRC’s limited commitment to pensions and health care. An estimated 900 million Chinese citizens — almost two-thirds of the population — live with little social safety net.

• Signs of Unrest: The pension system’s financial instability is fueling public worry, according to an April 2019 Voice of America report. On the microblogging site Weibo, a young Chinese tech worker complained that his long hours won’t guarantee him a retirement check. “The point of [encouraging] us to work the 996 schedule [9 a.m. to 9 p.m. six days a week] is that we can work to death before we retire so as to perfectly save the country’s under-funded pension system a problem. Is it?” he wrote. Military veterans are also speaking out. The Chinese military has embarked on a program to streamline personnel and improve technology, and many demobilized soldiers took to the streets over the past few years to protest a lack of jobs, health care and other benefits. The Chinese Communist Party (CCP) used a heavy hand to quash the dissent. In April 2019, Chinese courts sentenced 47 people to up to six years in prison for their part in the 2018 protests, which involved hundreds of former soldiers, The Associated Press reported.

Seen from a distance, the PRC’s massive infrastructure and military spending campaigns convey the trappings of a rising power. The PRC has reasserted its dominance over its domestic peripheries and increased military pressure against its neighbor countries. For example, the PRC engaged in a border skirmish with India, militarized shoals in the South China Sea, cracked down on freedom of speech in Hong Kong and pressured Taiwan during a presidential election. Simultaneously, it is investing billions of dollars in emerging technologies and has embarked on a U.S. $1 trillion infrastructure scheme known as One Belt, One Road (OBOR) to link China with the rest of the world through railway, airport, port and highway projects.

The combination has demographers and social scientists asking how the PRC can continue the spending spree when its population and economic growth are about to decline. One scholar said the answer is simple: It can’t. 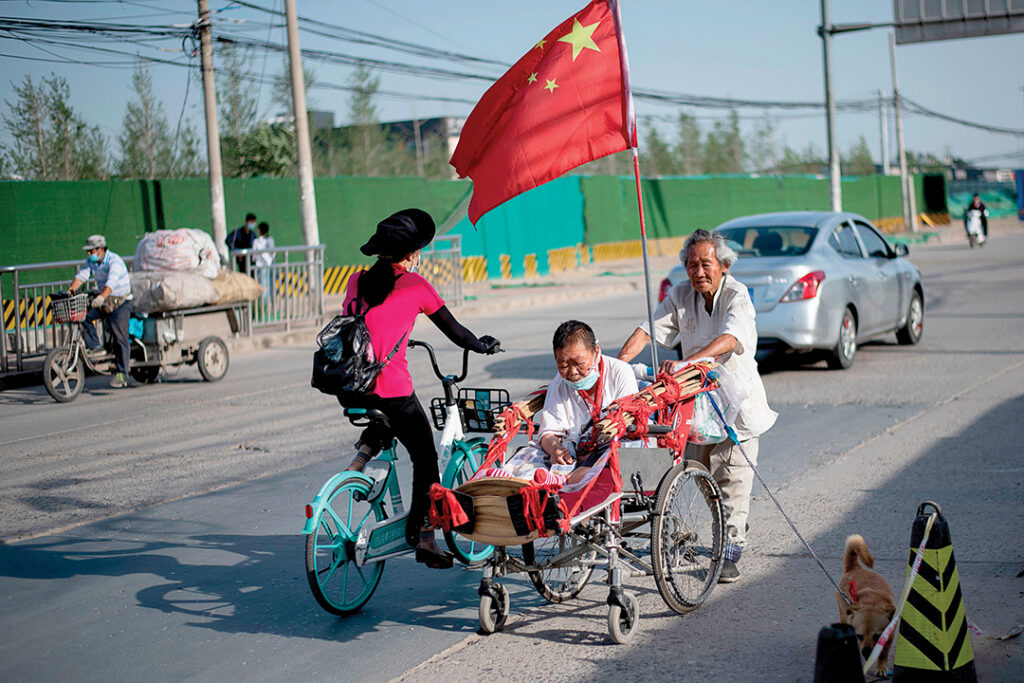 An elderly man pushes a woman in a wheelchair along a Beijing street in June 2020. AFP/GETTY IMAGES

“Predictions of future Chinese power are all ultimately based on multiplying rapid per capita economic growth by an enormous population of 1.4 billion,” said Salvatore Babones, an adjunct scholar at the Centre for Independent Studies in Sydney, Australia, and an associate professor at the University of Sydney. “Now that economic growth has ground to a halt” and the population is expected to decline, “those predictions must be revisited,” Babones told FORUM. “China will not become a global superpower. Like Russia before it, it will become “just another middle-income country stalled on the path to growth,” he said.

In a July 2020 article for Foreign Policy magazine, Babones painted a vivid picture of an imminent financial reckoning. Even before the coronavirus pandemic struck, the PRC’s economic growth had slowed from double-digit rates in the early 2000s to 6.1% in 2019, according to government figures. The reality is probably worse: The Brookings Institution reports that the PRC historically overestimates GDP growth by about 1.7 percentage points each year.

The country’s tax revenues grew just 3.8% in 2019 compared with 6.2% in 2018 and 7.4% in 2017, Babones wrote. Its spending grew by 8.1% in 2019, however. “Throughout the 2010s, China spent like there was no tomorrow, confident that tomorrow would always bring enough economic growth to cover today’s excesses, with a little left over to grease the wheels of corruption,” Babones told FORUM. “Now that tax receipts have faltered, it faces ever more severe budgetary constraints. Cue delayed projects, canceled warships and demands that international partners pay more of the costs of their China-sponsored infrastructure development. The fact is that China has had to buy its friends, and now that it can no longer afford to do so, those friends are deserting China.”

The COVID-19 pandemic brought some of the PRC’s signature infrastructure projects to a crawl, including the China-Pakistan Economic Corridor, Cambodia’s Sihanoukville Special Economic Zone and the Payra power plant in southern Bangladesh, according to an August 2020 analysis published by The Financial Express, an English-language newspaper in India.

“Even before COVID-19 wreaked havoc on supply chains and imposed travel bans on Chinese workers, many of China’s [OBOR] projects especially in Africa were coming under scrutiny. African countries have already called for $100 billion in bailouts and debt relief to help them cope with the devastating effects of the pandemic,” global affairs analyst Syed Ali wrote.

Infrastructure projects will surely resume as lockdowns are lifted. However, a contracting Chinese economy slowed by demographic changes likely will lead Beijing to “prioritize mitigating the financial impact of the virus and resolving the trade war with the United States over rolling out new overseas infrastructure projects.” While OBOR projects might not be shelved, “they will most certainly be plagued by delays,” Ali wrote.

Even though birthrates in China were starting to decline before the implementation of the country’s notorious one-child policy, the government’s population control program clearly curbed China’s growth. The policy was introduced in 1979 and wasn’t officially ended until 2015. To enforce compliance, provincial governments required the use of contraception and mandated abortions and sterilizations.

With China’s aging population and slowing economic growth, Indo-Pacific neighbors are watching to see what the CCP will do to continue its quest for superpower status as demographics work against it. “The regime’s assertiveness and incompetence have done more to decouple China from the respected international community than anything done by the Western allies,” wrote Ross Babbage, a nonresident senior fellow at the Center for Strategic and Budgetary Assessments in Washington, D.C., and CEO of Strategic Forum in Canberra, Australia. In an August 2020 piece for The Australian newspaper, he added that the communist nation “finds itself with few international friends, no trusted allies and an alert set of Indo-Pacific nations that are cooperating more closely to thwart its ambitions.”

That need to keep a wary eye fixed on the expansionist PRC won’t subside just because China is going gray. Sciubba pointed out that populations of prime working-age people — those 20 to 64 years old — have already peaked in China, Germany, Japan, Russia, South Korea and the U.S. “These are some of the key states from a national security perspective, and they are all going through similar demographic changes. So, we need to be careful not to assume that they’ll all of a sudden not have goals to project power or secure borders just because they’re aging. We just don’t see that going away so far.”

Vietnam is a case in point. The Southeast Asian nation’s population is expected to peak at 107.2 million in 2044, a decade earlier than forecast by the U.N. in 2019, according to a July 2020 study published in The Lancet medical journal. Yet, in part due to Chinese encroachment in its exclusive economic zone, Chinese oil exploration in its waters and the militarization of islands in the South China Sea, Vietnam continues to spend more on defense.

The Vietnamese government projects that its defense spending will increase from U.S. $5.5 billion in 2020 to U.S. $7.9 billion in 2024, allowing it to buy fighter and multirole aircraft, armored vehicles, ships, maritime patrol aircraft and surveillance equipment.

As the region’s defense spending rises, the future of the PRC’s ruling regime remains a question. The CCP “might muddle through, it might reform or it might fail,” Babbage wrote. It’s a fourth possibility, however, that keeps Indo-Pacific allies and partners on alert. “There is also a risk that the leadership might resort to international adventures to distract the public and bolster the regime’s security.”