At first sight, the Indo-Pacific doesn’t appear to be of strategic interest for Russia.

Geography makes Russia a remote extraregional player. Russia is not a full-fledged maritime power, and its traditional focus has always been on continental geopolitics. Moscow does not act as a rule-maker in the region. Since the concept of the Indo-Pacific was introduced and started to reshape international relations in the region, Russia has remained inactive and has failed to present a coherent Indo-Pacific doctrine or vision. Not only has Moscow not systematically engaged with the United States version of the Indo-Pacific, but it also failed to contribute to the debate over the concept among states with differing visions or even to the dialogue among regional states on good terms with Russia. Finally, with Russia’s reorientation to Asia strategy, intended to diversify Russia’s regional links, increasingly turning into a pivot to China strategy, one might conclude that Russia and the Indo-Pacific are worlds apart and the role of the former in the latter is marginal and inconsequential.

Nevertheless, this conclusion is misleading. Behind the facade of disengagement are fast-growing arms and energy deals that make Russia a substantial player in Indo-Pacific geopolitics. Moreover, Russia’s naval activities in the Indo-Pacific have increased in recent years and included drills in the Philippine and Coral seas, with calls to the ports of Malaysia, Singapore and Indonesia. Since 2015, the Pacific Fleet of Russia has conducted numerous maneuvers with the Navy task groups, either passing through the South China Sea (SCS) or nearby areas to demonstrate Russia’s capacity to project considerable military presence in the region.

Also, Russia has been assisting Vietnam in building a submarine base and repair dockyard at Cam Ranh Bay, a former Soviet military base in Vietnam, which was used as a U.S. base during the Vietnam war for ships and aircraft. While this will not transform this facility into Russia’s own military base, the Vietnamese leadership emphasized that Russia would enjoy strategic privileges there, according to Dr. Grigory Lokshin of the Russian Academy of Sciences’ Institute of Far Eastern Studies.

What often escapes observers’ attention, which is predominantly focused on high-profile deals between Russia and other large powers such as the People’s Republic of China (PRC) and India, is the rather surprising fact that Russia has become the largest supplier of major arms to smaller Southeast Asian states, which now purchase more arms from Russia than the PRC and India combined, according to a 2019 Stockholm International Peace Research Institute report. Within the Association of Southeast Asian Nations (ASEAN), Russia also outsells the U.S., the report said. 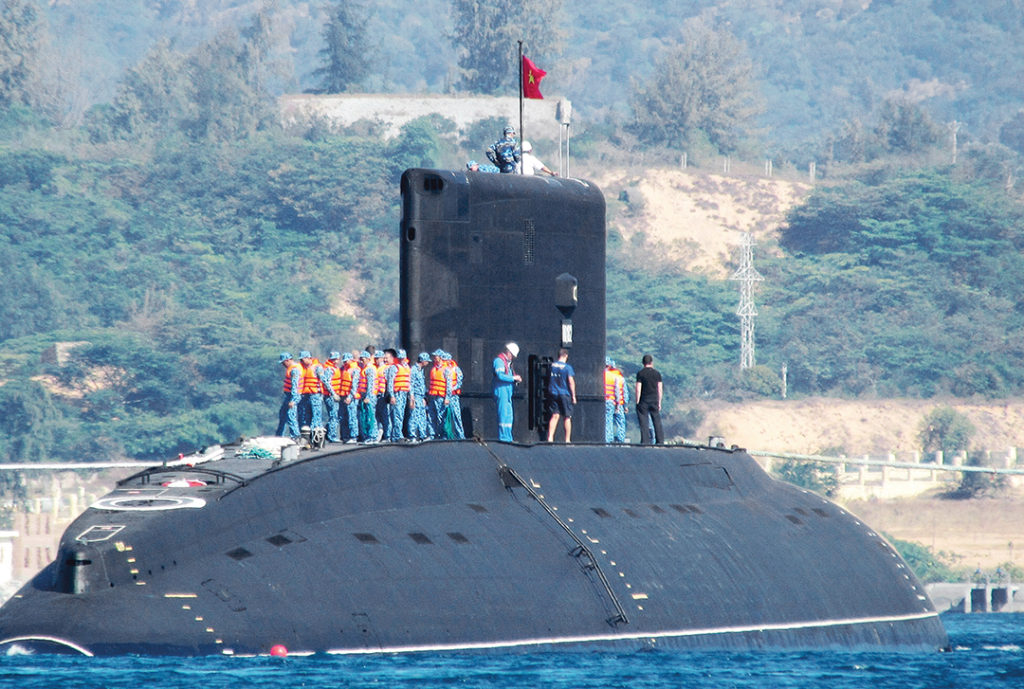 This despite Russia lagging the U.S. as a global arms exporter and Southeast Asia presumably not being a strategically important region for Russia. According to some assessments, Russia has leapfrogged other countries in its arms exports to the Indo-Pacific, which now accounts for more than 60% of its total arms sales, the Lowy Institute’s online publication The Interpreter reported in 2019.

Is Moscow trying to balance against the PRC by arming up the PRC’s strategic rivals in the SCS region and thus compromise the PRC-Russia alignment? Or does Russia’s alignment with the PRC come at the cost of Moscow’s relations with Southeast Asian states?

The answer to both questions is no. The geopolitics that surround this puzzling dynamic involving Russia, the PRC and the Indo-Pacific states turns out to be more complex than a simple zero-sum logic would suggest.

Building on Soviet era experience in the area during the Cold War, Russia has historical ties to many countries in the region, many of which were either communist-led or nonaligned former Western colonies. In addition to the historical ties, a geopolitical rationale behind Russia’s behavior in the Indo-Pacific has to do with checking, blocking or otherwise frustrating the geopolitical goals of the U.S., not the PRC. It is the U.S., not the PRC, which the Kremlin views as a major existential threat. Moscow reads the Indo-Pacific project through the lens of its systemic balancing against the U.S., especially in the context of Washington labeling Russia a “revitalized malign actor” in the Indo-Pacific, according to the U.S. Defense Department’s 2019 “Indo Pacific Strategy Report: Preparedness, Partnerships, and Promoting a Networked Region.” What Russia does in the Indo-Pacific region, toward both the PRC and smaller Southeast Asian states that are threatened by the PRC, is in accord with its larger global strategy of balancing against the U.S. 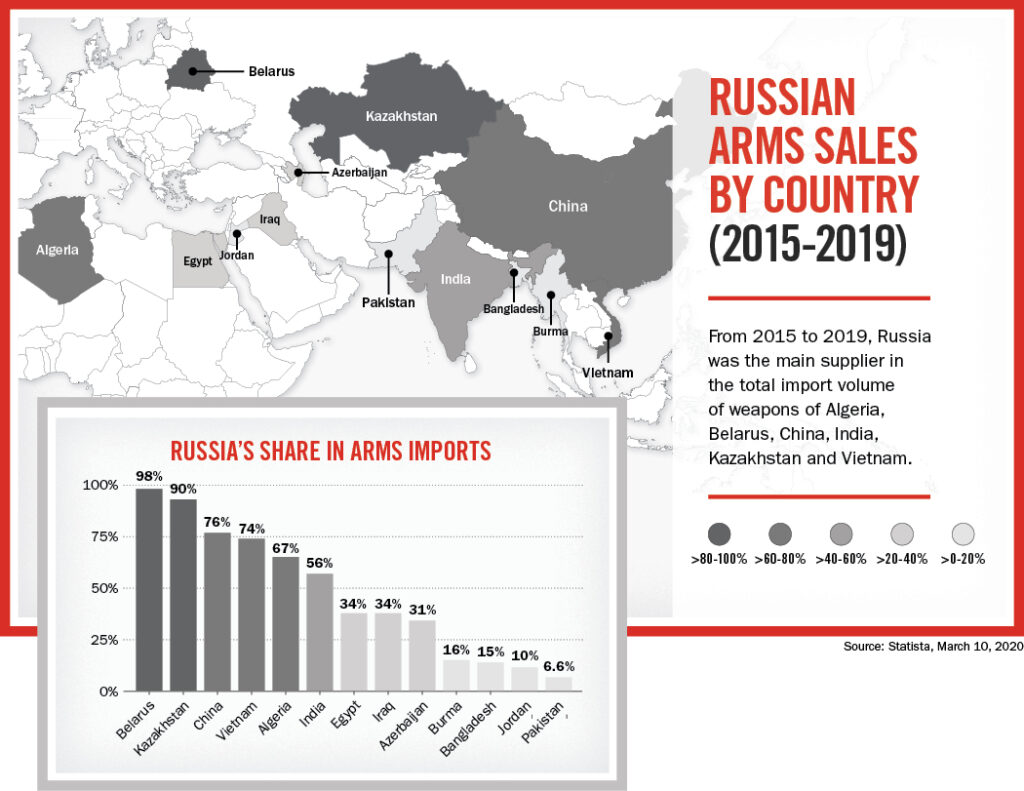 Especially telling in this regard is the Russian State Duma’s internal discussions of reestablishing a military presence in Vietnam. The return to Cam Ranh Bay military base, for example, is justified on the basis that Russia’s strategic partners in Washington “do not understand the language of diplomacy and rattle the sabre,” according to an October 2016 analysis in the Russian newspaper Parlamentskaya Gazeta [The Parliament Newspaper]. “Russia undoubtedly needs military bases in Cuba and Vietnam,” Franz Klinzewitsch, Russia’s first deputy chair of the Federation Council’s Committee on Defense and Security, said in the article.

Indeed, Russia stationed IL-78 tanker aircraft at Cam Ranh Bay that were used to refuel Tu-95 nuclear strategic bombers for resumed patrols near Japan and the U.S. territory of Guam. Washington admonished Hanoi in January 2015 for letting Russia use the base, which, Washington believed, raised tensions in the region, as researchers Nhina Le of George Mason University’s School for Conflict Analysis and Resolution and Koh Swee Lean Collin of Nanyang Technological University’s S. Rajaratnam School of International Studies in Singapore described in The Diplomat in March 2015.

The logic of balancing against U.S. policies also permeates Russia’s reaction to the U.S. version of the concept of the Indo-Pacific. Moscow believes the term Indo-Pacific to be an artificial construct based on Cold War-style bloc mentality that is explicitly aimed at undermining ASEAN’s regional centrality and creating containment rings around the PRC. That’s how Observer Research Foundation scholars Nivedita Kapoor and Nandan Unnikrishnan described Russia’s stance in a January 2020 post on the Valdai Discussion Club website. As a result, Moscow has preferred to use the terms Asia-Pacific or Eurasian Partnership, which bring the PRC back into the picture.

Some leading Russian experts on Southeast Asia have advised that because the PRC, India and ASEAN member states are all Russia’s close and highly valued partners, Moscow needs to consider how to neutralize “unhappy trends” among them. Moreover, Moscow’s special relationships with these states should not be underestimated in this regard, as Russian Academy expert Dr. Victor Sumsky has described. Russia should also encourage the formation of some sort of PRC-Vietnam alignment, according to the Russian Academy of Sciences’ Dr. Dmitry  Mosyakov. Thus, Moscow’s dominant geostrategic aspiration in the region is not to use smaller Southeast Asian states to hedge against the PRC’s growing clout. Instead, it is to figure out how to make balancing against the U.S. a common denominator in its dealings with the PRC and its actual and potential rivals.

This logic of systemic balancing on Russia’s part explains why the PRC — concerned about the growing military capabilities of its SCS rivals due to Russia’s arms transfers — is satisfied overall with the situation. First, Russia’s presence contributes to slowing down, if not preventing, the Southeast Asian states’ strategic turn to the U.S., which would close the containment ring around the PRC. While the current trend might not be ideal, the alternative is worse for Beijing. Second, and given Moscow’s aspiration to iron out unhappy trends among the PRC, India and Southeast Asian states, Russia’s growing role in the region creates extra channels for Beijing to engage with its otherwise opponents — something the PRC values a lot. Third, decision-makers in Beijing understand that Russia agrees with the PRC on major issues of global politics — a crucial asset for Beijing, especially in the context of deteriorating PRC-U.S. relations. As confirmation of Russia’s special status in the PRC’s regional geopolitical calculus, one can look at the fact that Beijing, while pressuring Indian, Malaysian and U.S. energy companies not to cooperate with Vietnam in the SCS, has remained silent about Russia’s involvement in Vietnam’s offshore energy projects. Russia’s arms transfers to Southeast Asia or other military engagements with the region are equally immune from criticism by Beijing.

The implications of these intricate geopolitical configurations for the U.S. are significant. Russia is gaining access to more instruments for promoting its version of multipolarity. The PRC will receive Russia’s political backing and access to energy resources and military technologies, which are important for the PRC in its growing tensions with the U.S. in the Indo-Pacific. Closer PRC-Russia relations in the region also mean limited Russia-U.S. and PRC-U.S. cooperation on issues of crucial strategic importance for the United States. Moreover, given that not all Indo-Pacific states fully share the U.S.’ geopolitical vision for the region, Russia’s growing military-technical connection with Southeast Asian states and the PRC’s acceptance of it can deepen the fault lines that exist between different interpretations of Indo-Pacific.

Because the way Russia approaches the Indo-Pacific is affected by the logic of system-level balancing against the U.S., the only possible effective response for Washington must be at the same level. Fighting a war on multiple fronts against the PRC and Russia at the same time doesn’t seem a leading strategy, as some U.S. strategists have pointed out. Instead, the U.S. should take advantage of the ample opportunities the Indo-Pacific presents to slow down, if not reverse, undesirable trends in PRC-Russia military cooperation.