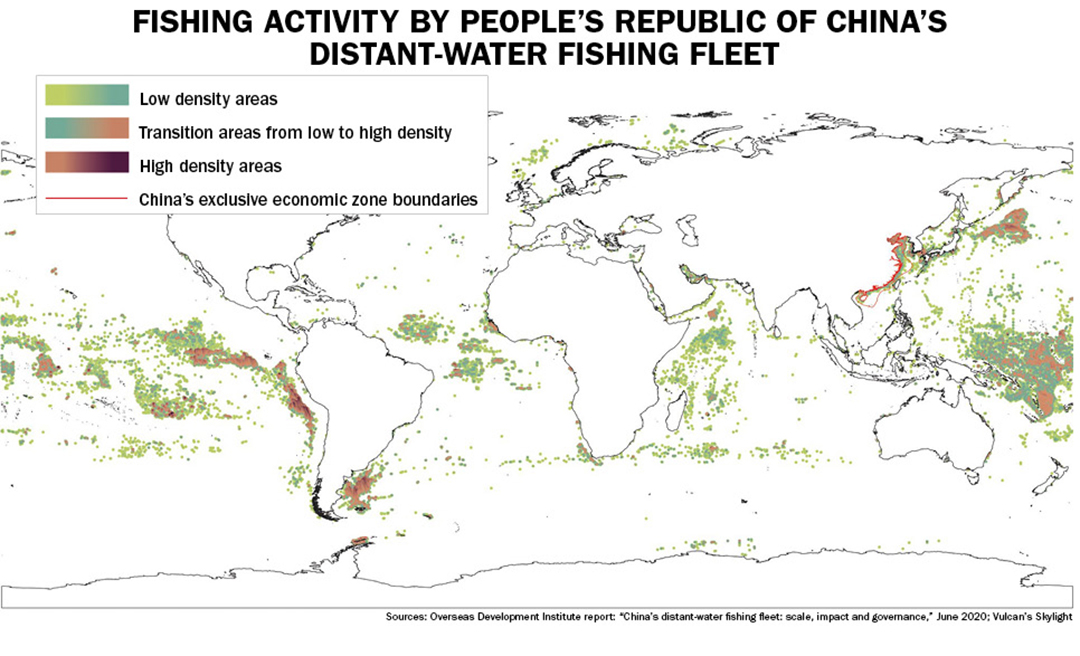 The People’s Republic of China’s (PRC’s) distant-water fishing fleet continues to harm developing countries through the loss of billions of dollars in revenues and by contributing to unsustainable levels of illegal, unreported and unregulated (IUU) fishing, all of which threaten the livelihoods and food security of legitimate fishers and communities, according to a series of reports released in the past year.

Having exhausted much of its fish stocks in domestic waters, the PRC has amassed the world’s largest distant-water fleet with close to 17,000 vessels, five to eight times more than previously documented, according to the Overseas Development Institute (ODI), an independent global think tank.

Moreover, PRC vessels account for more than 58% of those suspected or confirmed to be involved in IUU fishing worldwide, ODI revealed in its June 2020 report, “China’s distant-water fishing fleet: scale, impact and governance,” which used big data analytics, algorithms and geographic information systems. The violators include vessels owned by some of China’s largest, state-owned distant-water fishing companies and more than 100 Chinese-owned vessels flagged outside the PRC.

Yet “Chinese engagement in IUU activities is most probably more extensive,” the report said.

Another 2020 study, led by Jaeyoon Park of Global Fishing Watch and based on satellite imagery, found more than 900 vessels of Chinese origin in 2017 and more than 700 in 2018 fished illegally in North Korean waters. They caught an amount of Japanese flying squid approximating the combined catch of Japan and South Korea (more than 164,000 metric tons worth over U.S. $440 million), according to the journal Science Advances. Park and his colleagues also found 3,000 small-scale North Korean vessels fished, mostly illegally, in Russian waters.

A third study focused on the discovery of increasing numbers of Chinese fishing vessels off Ecuador’s Galapagos Islands, which climbed to over 350 at its peak in 2020, according to the Center for International Maritime Security (CIMSEC) website. Researchers determined the increased fishing was a product of the PRC’s global fisheries strategy, which entails generous subsidies to the industry, based on their analysis of data and insight from Windward, a predictive maritime intelligence platform.

The researchers found that several challenges remain in the South American region. “While the fleet appears to largely be operating legally, some behavior indicates exceptions. Furthermore, despite any seemingly technical compliance with existing laws and regulations, some Chinese fishing activity falls into the unreported and unregulated categories and deserves careful consideration in terms of the sustainability of such operations,” Dr. Tabitha Grace Mallory, founder and CEO of the consulting firm China Ocean Institute, and Dr. Ian Ralby, an expert in maritime law and security, wrote in the CIMSEC article.

Fleets from countries besides the PRC are also engaged in overfishing globally, the experts noted. The international community needs to establish better monitoring of distant-water fleets and IUU vessels, they said. Many governments in developing countries, in particular, need to improve monitoring of distant-water fleets, Park and his co-authors wrote. They hope their “results can inform independent oversight of transboundary fisheries and foreshadow a new era in satellite monitoring of fisheries.”

Although the PRC is “not solely responsible for the global fishing crisis, China is the most significant actor,” the ODI report concluded, given the sheer size and global presence of its fleet.

“This makes low levels of transparency and control over the operations of its fleet of particular concern. Improving the governance of this fleet is central to efforts to combat overfishing and IUU fishing, and to prevent the degradation of global fish stocks,” the ODI report said.

“IUU fishing is much more than an environmental crime. It is a global, strategic challenge that must be met with a collaborative, international, strategic response,” according to U.S. Coast Guard Cmdr. Ben Crowell of Joint Interagency Task Force West and Wade Turvold of the Daniel K. Inouye Asia-Pacific Center for Security Studies, in the book Hindsight, Insight, Foresight: Thinking about Security in the Indo-Pacific.

“The businesses, vessels, owners and operators, sometimes state-sponsored, are functionally acting as transnational criminal organizations and are having an outsized impact on the ecological health, economic security, food security and overall maritime security of the world’s oceans,” they wrote.

“Vessels and nations engaged in IUU fishing must have their actions disincentivized. Until the cost becomes greater than the reward for the countries, owners and operators of IUU fishing vessels, these criminal behaviors will continue across the maritime commons.”