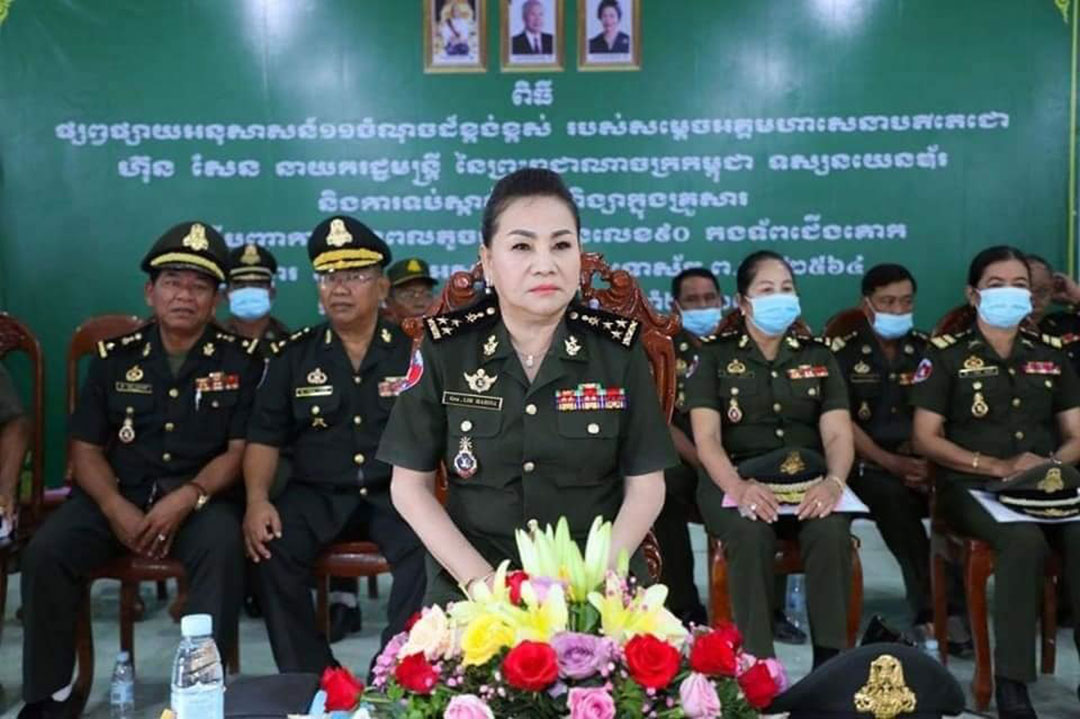 The Cambodian military is launching an initiative to erase gender inequality at a time when the country’s government is fending off criticism from United Nations investigators for its crackdown on human rights workers and political opponents.

The military said its initiative mirrors an effort by Prime Minister Hun Sen to address gender inequalities in government workplaces. Lt. Gen. Marina Lim, deputy director-general of the Department of Military Service and deputy chairwoman of the Gender Working Group, Ministry of National Defense, presented recommendations on October 6, 2020, to officers and Soldiers of the Cambodian Army’s 90th Infantry Brigade.

The aim was to “make the Army aware of the Royal Government’s policy,” Lim said in a news release. The policy ensures the right of Cambodian women to “participate in all sectors.” It also seeks to raise awareness of “gender perspectives” and prevent domestic violence among Soldiers and to communicate an in-depth understanding of gender equality and the empowerment of women in the Royal Cambodian Armed Forces.

The recommendations outlined by Lim, pictured, included: preventing sex trafficking, domestic violence and discrimination against women and children; understanding gender equality; and researching “difficult situations” involving women and men. Each of these, she said, contributes to the larger goals of “sustainable peace under leadership” and preserving “the cultural traditions of the Cambodian nation.”

“Brigade No. 90 continues to support women and provide opportunities for women Soldiers to participate in all work activities,” she said.

While the Cambodian government promotes gender equity, it remains under fire for its treatment of human rights workers and political opponents.

Mary Lawlor, a U.N. special rapporteur on human rights in Cambodia, released a statement on November 16, 2020, that called for an immediate end to the systemic detention of human rights defenders in Cambodia and the use of excessive force by Cambodian authorities.

“I am increasingly concerned by the circular pattern of detaining them for advocating against the detention of or violations against fellow defenders,” Lawlor said in the statement. “This cycle must end.” She added that 21 Cambodian human rights defenders had been subjected to threats and arbitrary arrest in the past three months.

Meanwhile, the military is pushing forward with the plan it says will eliminate barriers for women. Lt. Gen. Chap Vanny, deputy commander of the Army, said commanding officers are asked to provide women with encouragement and career opportunities to “eliminate discrimination against women,” according to a news release.

The recommendations parallel similar measures being taken across all ministries and institutions to promote gender equality, he added.

Cambodia has consistently deployed women to serve in U.N. peacekeeping missions. Between 2006 and 2019, it sent 285 women to countries including the Central African Republic, Chad, Cyprus, Lebanon, Libya, Mali, South Sudan and Syria. Cambodia also has promoted women in its military ranks. Eighty-eight women held the rank of general in the Cambodian Armed Forces as of March 2018, according to the Cambodian Ministry of Women’s Affairs.