As fireworks light up the winter night, scores of men, women and teenagers crying washoi, washoi (meaning wonderful) haul the last of six towering, lantern-covered floats up a small hill and into the town center, the culminating moment of a Shinto festival that has evolved from a harvest thanksgiving into a once-a-year meeting between two local gods.

The Chichibu Night Festival, which has roots stretching more than 1,000 years, is one of three famous Japanese festivals to feature huge floats, which can top 7 meters and weigh up to 15 tons. They are pulled through the streets on large wooden wheels by hundreds of residents in traditional festival garb — headbands, black leggings and thick cotton jackets emblazoned with Japanese characters — to drums, whistles and exuberant chants.

Shinto is Japan’s indigenous religion that goes back centuries. It is an animism that believes there are thousands of kami, or spirits, inhabiting nature, such as forests, rivers and mountains. People are encouraged to live in harmony with the spirits and can ask for their help. Ancestors also become kami and can also help the living.

This two-day festival is rooted in an older tradition of villagers giving thanks to the nearby mountain god for helping them during the planting and harvesting season, said Minoru Sonoda, the chief priest of the Chichibu Shrine and a former Kyoto University professor of religious studies. In 2016, the United Nations Educational, Scientific and Cultural Organization designated the festival an intangible cultural heritage. “It’s a time to celebrate the bounty of nature,” Sonoda said.

During medieval times, the festival evolved into a celebration of an annual rendezvous between the nearby mountain god and the goddess of the town. The latter is carried in an ornate ark-like box by a group of white-clad men through streets to the central park, where it rests while the six floats slowly converge on the crowded square, each one’s arrival celebrated with a burst of fireworks. 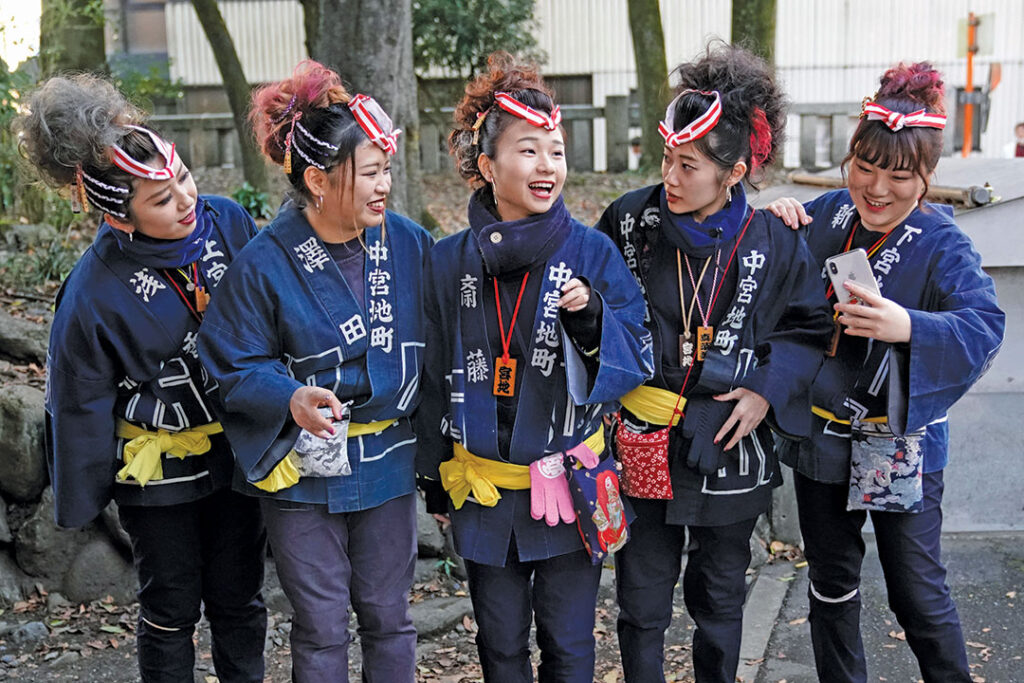 Participants clad in traditional happi coats prepare for a selfie before the Chichibu Night Festival in Chichibu, Japan. THE ASSOCIATED PRESS

These days many Japanese who flock to the festival, which draws about 200,000 people every December, don’t know either of those stories and say the event holds no religious meaning for them — but they do want to maintain the tradition. They visit the town, about 90 minutes by train northwest of Tokyo, simply for a fun, cultural experience.

“I like the fireworks and the food. Purely to enjoy. I don’t really think about the religious aspects,” said Mitsuo Yamashita, a 69-year-old retiree who has come to the festival for the past 15 years. “Japanese aren’t very religious, and in other ways we’re all over the place religiously.”

Many Japanese freely mix religions depending on the occasion, visiting a Shinto shrine at New Year’s, holding a Buddhist funeral or getting married in a Christian wedding, a popular option even though only 1% of the population is Christian. “I don’t know if that means we’re flexible or if we don’t have convictions,” Yamashita said.

Roaming the streets in the afternoon, a group of high school girls decked out in festival garb who later joined in pulling the floats said the festival wasn’t religious for them. Yet they emphatically said they believed the story about the two gods meeting that evening. The girls also said they would celebrate Christmas with a decorated tree and gift-giving and didn’t see any problem mixing religions.

“No problem! That’s normal. Most Japanese do that,” said Rio Nishimiya, 18.

Such views are shared by many Japanese. Attitudes toward religion are ambiguous. Many would say they aren’t religious — and yet every year millions of Japanese visit Shinto shrines and Buddhist temples across Japan and have little shrines in their homes where they pray.

Religion is viewed differently in Japan, and in some other parts of Asia, than in the West or the Islamic world, where there is an emphasis on individual faith and a set of beliefs, or a creed, based on a sacred text such as the Bible or Koran.

In Japan, religion is more of a cultural, communal and ritualistic thing than a personal faith.

Shinto has no sacred text or clearly defined theology, and many Japanese would be hard-pressed to summarize it. “It’s a religion of life,” said Sonoda, the chief priest. “It’s something inherited from ancestors that provides a spirituality passed on from parent to child. And this isn’t just for humans, but we are also linked to animals and all living things. It’s because of them that we’re alive.”

“Worldview may be a better way to describe it,” he said.

There are no definitive numbers on Shinto believers in Japan simply because there’s nothing definite to count. “We don’t use the phrase ‘believers,’” Sonoda said. There are no weekly services and no missionaries to spread Shinto.

There are more than 80,000 Shinto shrines across Japan, and nearly as many Buddhist temples. The two have generally coexisted peacefully after Buddhism’s introduction to Japan in the sixth century, along with Confucian thought from China.

That long history of coexistence is one key reason behind Japanese attitudes toward religion. “Each religion had a different role, and these three — Shinto, Buddhism and Confucianism — shaped Japanese culture,” said Susumu Shimazono, a professor of religion at Tokyo’s Sophia University, a Jesuit school. “There was some dogma, but none of these religions stressed exclusiveness. This sort of combination of ideas and philosophies is typical of East Asia.”

Interest in Shinto among ordinary Japanese is holding steady or even increasing, experts say. Visits to the Ise Grand Shrine, Japan’s most important shrine, have grown in recent years, running to 8.9 million through November 2019, up from 7.8 million during the same period in 2018 and 8.5 million for all of 2017.

Shinto is also entwined with the Japanese imperial family, holding that the emperor is a descendant of the sun goddess Amaterasu Omikami.

During World War II, Shinto was elevated to the state religion, and the war effort was fought in the name of the emperor, who was considered divine. After the war, the emperor was stripped of his divine stature, and the U.S.-drafted Constitution ensures freedom of religion and the separation of religion and state.