Diseases rarely seen in the developed world — tuberculosis, leprosy, rheumatic fever —  still persist in many remote islands of the Pacific. Adding to the health challenges for island residents are conditions linked to either local culture or the environment, such as injuries caused by billfish and motorboats and even cancers caused by the custom of chewing betel nuts.

Oceans of distance and a lack of access to cutting-edge medical care once proved insurmountable for many of these patients, but U.S. military doctors in Hawaii established what has become the longest-running telemedicine program in the world providing humanitarian care, according to an article written by the program’s founder in the medical journal Frontiers in Public Health.

The Pacific Island Health Care Project (PIHCP) has been a lifeline for Pacific islands patients and an educational training ground for physicians at Tripler Army Medical Center (TAMC) in Honolulu, Hawaii, since 1990. 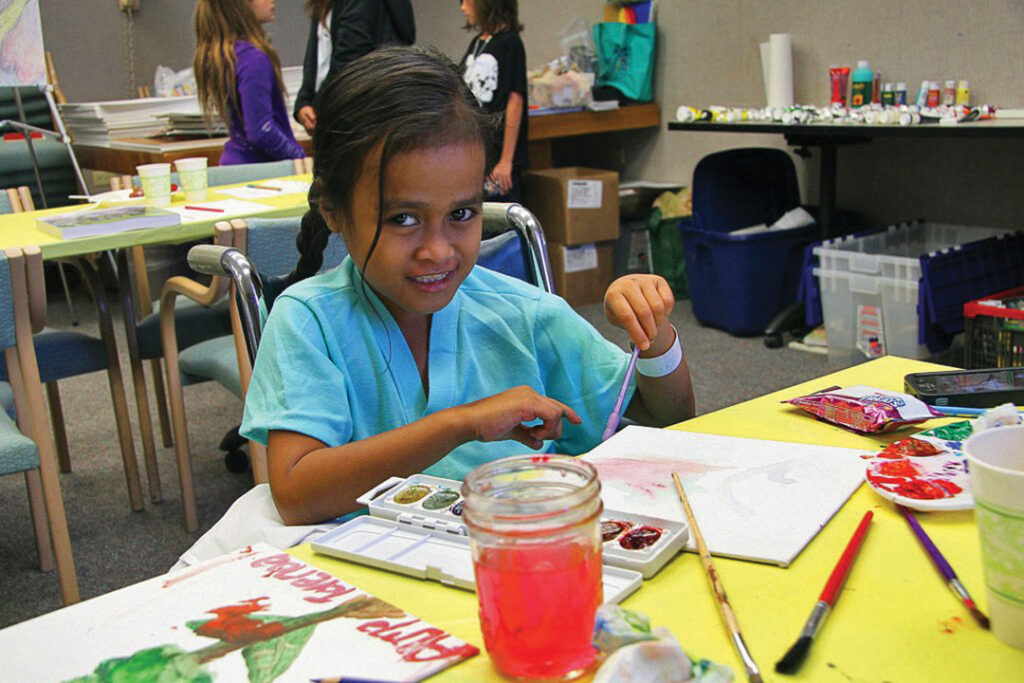 This 10-year-old girl from the Federated States of Micronesia was referred to Tripler Army Medical Center to be treated for a genetic condition. REGIONAL MEDICAL COMMAND-PACIFIC PUBLIC AFFAIRS

“It’s a great learning experience for medical personnel, and these patients are so appreciative of the care they get,” said U.S. Army Col. Mark Burnett, PIHCP medical director and a pediatric infectious disease and travel medicine physician at Tripler.

The PIHCP is federally funded through the U.S. Army Medical Command to provide humanitarian care to underserved people of the U.S.-affiliated Pacific islands and to create graduate medical educational experiences for Tripler residents and staff. The program serves patients from the Marshall Islands, the Federated States of Micronesia (FSM) and the Republic of Palau. It also serves the U.S. territories of American Samoa, the Commonwealth of the Northern Mariana Islands and Guam. These remote islands are home to approximately 500,000 people scattered across more than 18.1 million square kilometers of Pacific Ocean. Many survive by farming and fishing. Under the Compact of Free Association, citizens of Palau, the Marshall Islands and FSM are entitled to care through the military health system with the proper referral from their health care systems.

A Wisconsin native, Burnett came to the program as a medical student in 1992 and then returned as a resident from 1993 to 1997. In the earliest days of the program, critically ill patients would arrive at Tripler with little advance warning. “They would just fly over here, and we would have little idea what we were getting ourselves into,” Burnett said.

The project has undergone many changes since 1990 to improve outcomes and make the educational experiences more valuable. Unlike the earliest days of the program, when island doctors would call and immediately send ill patients to Hawaii, the program slowly equipped many island clinics with computers, digital cameras, scanners, printers and video equipment to support a web-based consultation system. The success of the program is the result of the foresight and ingenuity of retired U.S. Army Col. Donald Person, a former chief of pediatrics at Tripler who recognized how new technologies could benefit patients in remote areas. 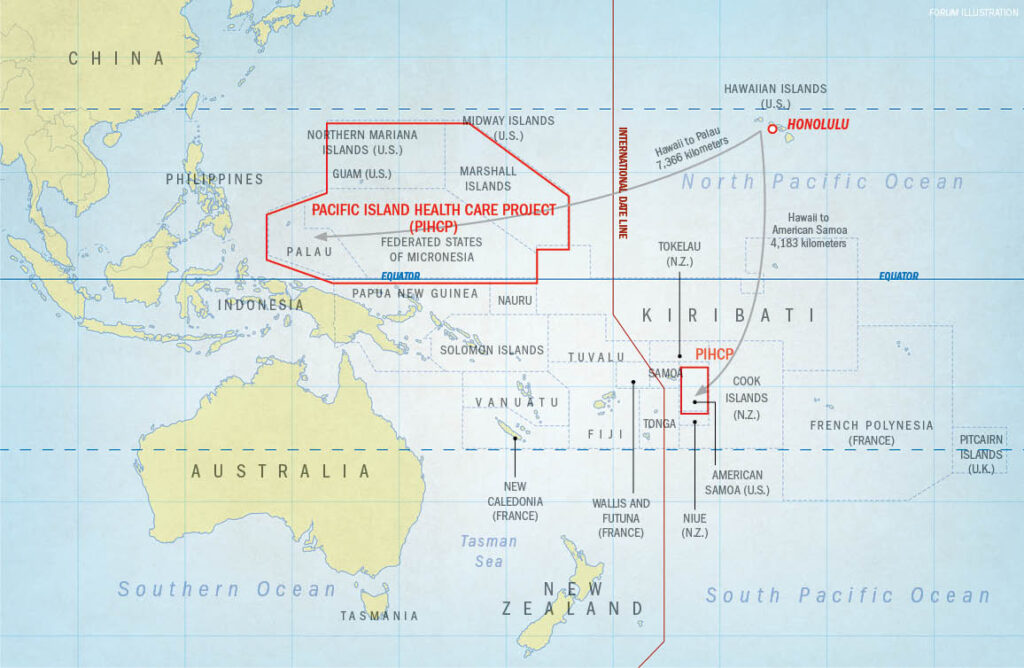 Burnett became director in March 2012 following the retirement of Col. Person, who remains actively involved in the program and maintains many friendships with physicians in the Pacific islands. With differences in time zones and the complexity of getting patients to Tripler, the program is judicious about which patients become one of the approximately 100 to visit Tripler each year. Many are treated at local clinics on the islands after their doctors consult with Tripler physicians. “Now we’ve got a system that really works well where they will, following consent from the patient or parent in the case of a minor, upload information about the patients — name, background, past medical history,” Burnett said. “They can upload pictures, and some places [in the islands] can do CT scans.”

Doctors attempted real-time consultation with video teleconferencing between U.S. Army Missile Defense Command on the Marshall Islands and Tripler as early as 1992. However, with major time zone differences and the ease of emailing documents and image attachments, the project moved toward a “store and forward” web-based system for nonemergency patients.

“It works out well for the doctors here,” Burnett said. “There have been attempts in the past to do synchronous telemedicine, but store and forward works better. They upload information to the system. They shoot it to us, and Dr. Person and myself will screen it.”

Mary A. Takada had never heard about the health care program when her husband, Uchel Naito, was referred to Tripler in 2002. Naito was diagnosed with a slow-growing blood cancer called hairy cell leukemia. His treatment from 2002 to 2005 was a complete success. “He is here to tell the story,” Takada said. “He is one of the survivors.” During the treatment, Takada volunteered to help other patients coming from Palau to Hawaii. Many required interpreters, and they also needed rides to appointments.

In 2005, Takada officially became coordinator for the Palau Medical Referral Program in Hawaii and case manager for patients coming from the nation to Tripler. “I realized this was a one-sided relationship,” Takada said. “We were the recipients, and we wanted to give something back and to be by the side of the patients coming from Palau.” 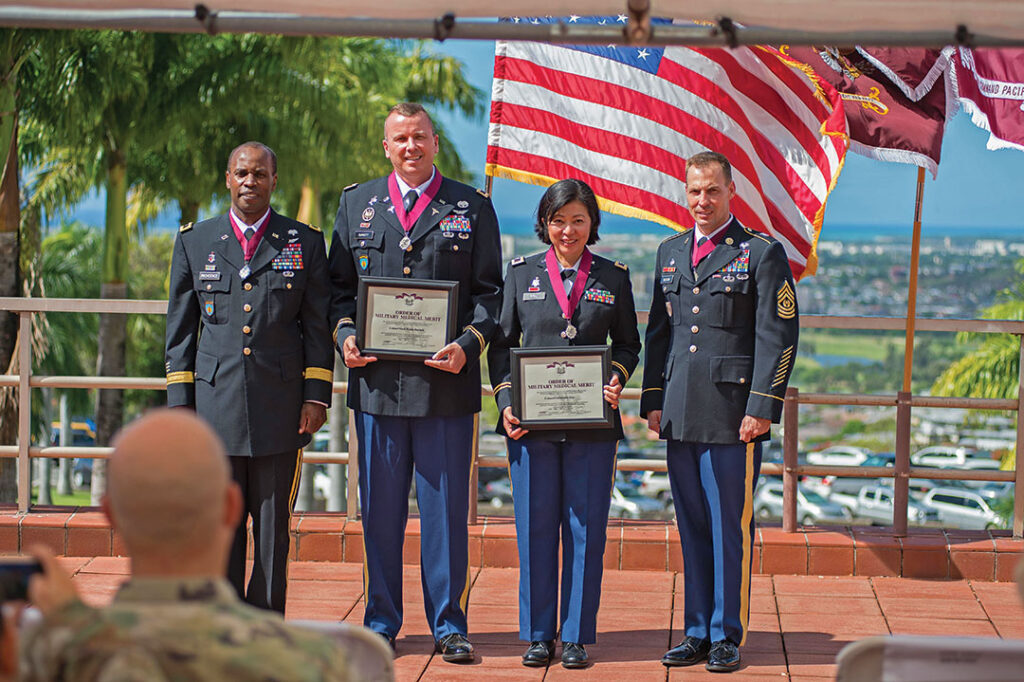 Patients referred to Tripler must have precisely defined and treatable conditions because the U.S. government doesn’t fund long-term needs that involve durable equipment, such as dialysis. The patients must have a good chance of making a healthy return to their lives on the islands after treatment.

For those who are sent to Hawaii, the program pays for their airfare to and from Honolulu and their inpatient and outpatient care. It doesn’t pay for durable medical equipment, transportation to and from clinic visits, or food.

Although all of the islands can consult with Tripler, their governments must provide housing in Hawaii to be able to refer patients. Right now, it’s offered only by the governments of Pohnpei State in the FSM, the Marshall Islands and Palau.

Palau provides housing in Hawaii for up to eight patients and eight family members at one time. “We are operating at full capacity right now,” Takada said.

The global COVID-19 pandemic caused the program to temporarily suspend the acceptance of  new cases at Tripler. Patients already in Hawaii are continuing to receive care and will return home after their care is complete.

More than 50 physicians from throughout the islands can refer patients from their clinics or consult with Tripler physicians. By doing so, they are providing valuable experiences for residents at Tripler, who are seeing maladies they would rarely see in the U.S., Burnett said. Patients coming from outer atolls sometimes have advanced cancers with large head and neck lesions that would have been treated much earlier in the U.S. Coming to Tripler, Burnett said, “is the only chance for these patients to survive.”

Other cancers are linked to a local custom. Many island residents chew betel nuts, for example, which are seeds from a type of palm tree. The nuts are chewed after being ground up or sliced and then wrapped in leaves and coated with lime. Sometimes tobacco is mixed in, creating a carcinogenic and addictive paste. “Their teeth turn bright red, and they spit it out, and it’s bright red,” Burnett said. “It’s incredibly addictive.” 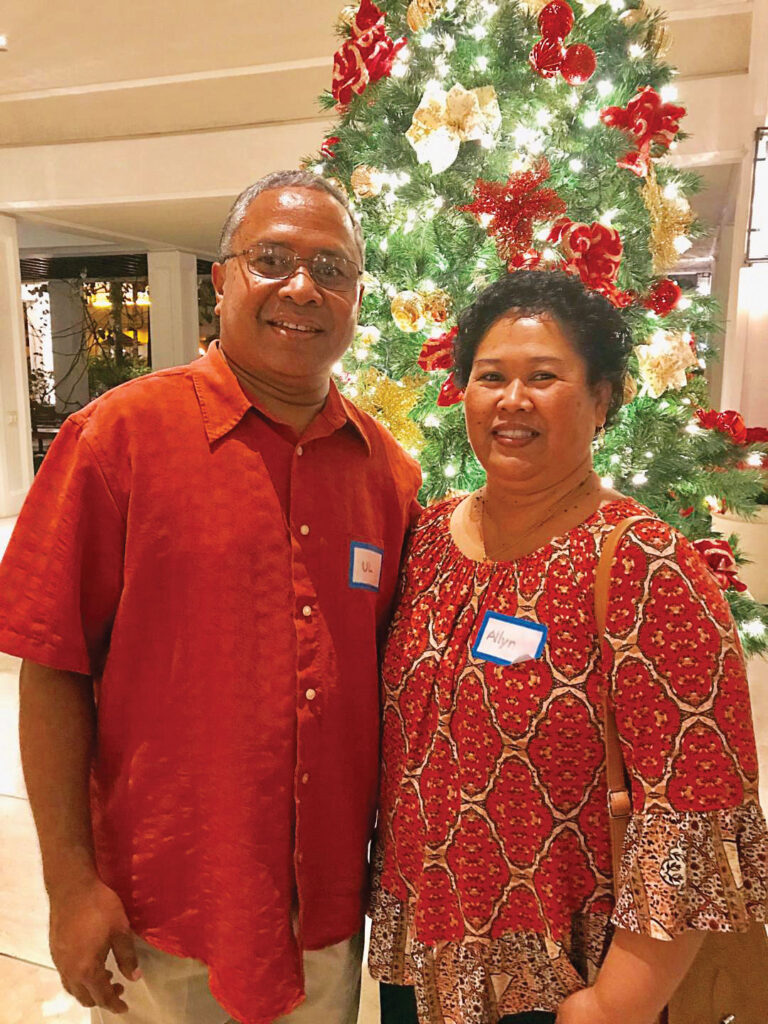 Palau resident Uchel Naito, left, was successfully treated for a blood disease by the Pacific Island Health Care Project. His wife, Mary A. Takada, right, has been the coordinator of the Palau Medical Referral Program in Hawaii for the past 15 years. Naito is now the consul general of the Republic of Palau to the state of Hawaii. PALAU MINISTRY OF HEALTH

Children with cleft palates are a common ear, nose, throat referral to Tripler. Oral cancers are prevalent in Palau and the states of Yap and Pohnpei in the FSM, where both men and women chew the betel nut-tobacco mix, according to a report on the PIHCP penned by Person.

The telemedicine program is especially useful in assessing patients with gynecological cancers, the report said. Women with advanced but treatable uterine and ovarian cancers are treated in the program. In one case, Tripler surgeons removed a 90-pound benign ovarian cyst from a Marshall Islands woman.

Sometimes, maladies are unique to the environment. A boy from Kosrae state in the FSM, for example, fell on a coconut husker (spike buried in the ground) and lacerated his trachea. Life-threatening emphysema ensued before a Tripler pediatric surgeon operated. The child returned home healthy a week after the surgery.

When patients are successfully treated — either through telephone and web consultations or visits to Tripler — lifetime bonds are formed between caregivers and patients. “Patients from 20 years ago are searching me out on Facebook,” Burnett said. “We see some incredible cases. You remember these patients forever.”

Takada traveled back to Palau in October 2019 and came into contact with a high school boy who had been treated at Tripler for a heart condition when he was 3 years old. “He said, ‘Do you remember me? I play basketball now. My mom told me I was a patient of yours,’” Takada said. Such experiences make the job worth doing. “We have patients who are here 20 years later to attest to this program,” she said. “And the relationships I have with these providers has developed over the years. They make me feel like I am a part of something.” 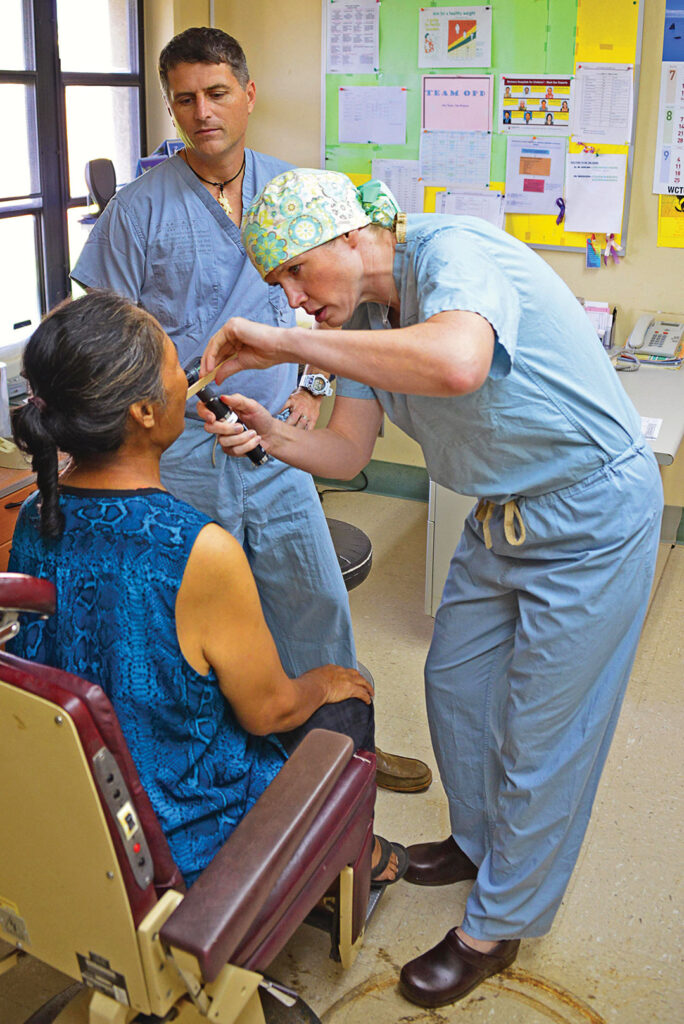 Ear, nose and throat specialists from Tripler Army Medical Center conduct a clinic in Palau in 2016 and screen a patient for possible surgery. U.S. ARMY

Dr. Gregory Dever, a Palau pediatrician, remembers a case when a young boy entered the emergency room at Belau National Hospital with a headache. A CT scan revealed a mass, so the case was referred to the PIHCP website for interpretation of the images. The diagnosis was meningioma, a tumor that develops from the membrane that surrounds the brain and spinal cord.

Doctors at Tripler removed the nonmalignant mass and implanted a shunt to relieve fluid buildup. The boy eventually was operated on a second time at Tripler, according to Dever, the former director of hospital and clinical services for the Palau Ministry of Health. Now, for almost a decade, the patient hasn’t needed to return to Hawaii for additional treatment.

Without the program, Dever said, the case could have had an entirely different outcome. “This is just one story and shows the humanitarian value of the program to the islands,” Dever said. “The patient came from a humble family. The family is very appreciative that TAMC [Tripler] saved his life and that he could go on to become a substance abuse counselor.”