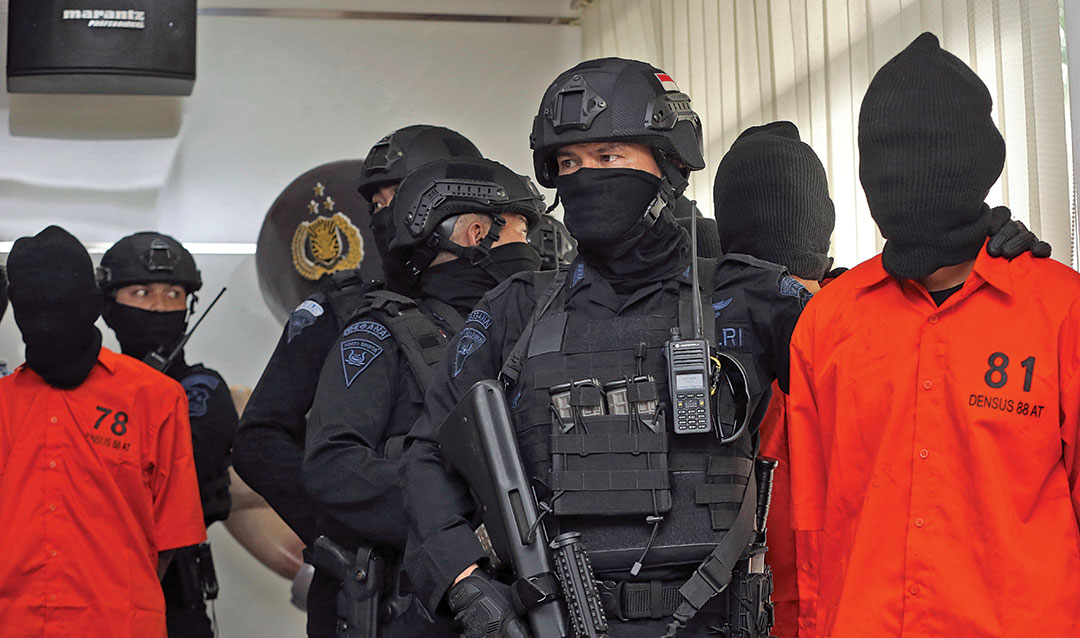 Indonesia has sentenced two leaders of an al-Qaida-linked group behind the 2002 Bali bombings that killed more than 200 people. The accused were convicted on terror charges related to sending militants to fight in Syria.

Story by THE ASSOCIATED PRESS AND AGENCE FRANCE-PRESSE

photos by THE ASSOCIATED PRESS

“The defendants prepared cadres to go to Syria, as well as supported them financially while on the mission,” presiding Judge Alex Adam Faisal told the East Jakarta District Court.

The court said Wijayanto, 56, who took over JI’s leadership in 2009, recruited Indonesians to fight and train with groups opposed to Syrian leader Bashar al-Assad between 2012 and 2018.

Indonesia outlawed JI in 2008 and cracked down on its network as the world’s biggest Muslim-majority nation grappled with a string of extremist attacks.

Counterterrorism police detained Wijayanto and his wife in July 2019 following the arrest of nine suspected JI members who had returned from fighting in Iraq and Syria. Wijayanto, a civil engineer who received military training at a terrorist camp in the southern Philippines in 2000, had eluded capture since 2003.

Police said Wijayanto replaced another militant, Zarkasih, as JI’s leader. Zarkasih was arrested in 2007 and sentenced to 15 years
in prison.

Prosecutors said Wijayanto recruited and trained members of JI’s military wing, sending some to Syria to fight with the al-Qaida-affiliated group Jabhat al-Nusra. He also was accused of helping make bombs used in a series of attacks, including a 2004 bombing at the Australian Embassy that killed nine, and of involvement in sectarian conflict in Poso, a hotbed of Islamic militancy on Indonesia’s Sulawesi island.

JI, which also carried out a 2003 car bombing at the JW Marriott hotel in Jakarta that killed a dozen, has been overshadowed in recent years by militants loyal to the Islamic State group. The sentencing of the two JI leaders came weeks after a married couple with links to the Islamic State were jailed over a failed bid to assassinate Indonesia’s former chief security minister Wiranto in 2019.

In March 2020, Indonesia’s police anti-terrorism squad shot and killed one suspect and arrested two others in a raid on the main island of Java, seizing weapons and chemicals allegedly used for bomb making. Officials said the man fatally shot
by police resisted arrest by wielding a sword.

The suspects were linked to a banned militant organization responsible for recent attacks on police. The group is a local affiliate of the Islamic State known as Jamaah Anshorut Daulah, National Police spokesman Argo Yuwono said.

The country’s last major terrorist attack was in May 2018, when two families carried out suicide bombings in Indonesia’s second-largest city, Surabaya, killing a dozen people including two young girls whose parents involved them in one of the attacks. Police said the father of the girls was the leader of a Jamaah Anshorut Daulah cell.

A radical cleric who founded that group, Aman Abdurrahman, was sentenced to death in 2018 for inciting attacks including a 2016 suicide bombing at a Starbucks in Jakarta.

Indonesia has been battling militants since the Bali bombings. In recent years, attacks aimed at foreigners have been largely replaced by smaller strikes targeting the government, police and anti-terrorism forces and inspired by Islamic State attacks abroad.

Indonesian security forces continue working to address terrorism. For example, they have conducted raids that led to hundreds of arrests and killed more than 179 suspected militants between 2003 and early 2020, The Associated Press reported.

“Indonesia has also mulled other measures as well in order to manage its terrorism challenge, including refusing to repatriate former Islamic State fighters domestically and advancing intelligence-sharing mechanisms with neighboring Southeast Asian states,” according to the online magazine The Diplomat.