International concern is mounting over the debt burdens faced by many developing countries as the economic crisis induced by the COVID-19 pandemic intensifies. The International Monetary Fund (IMF) and World Bank, for example, recently sounded an alarm about the financial stability of nations that have a dwindling ability to service massive debt, given catastrophic reductions in export incomes. The two organizations compiled their concerns in a March 25, 2020, statement and call to action on the debt of International Development Association countries.

Defaulting debtor nations pose a risk to the stability of the international financial system. A range of international humanitarian organizations, meanwhile, are similarly distressed at an emerging crisis likely to affect millions who are already vulnerable. Warnings about the widening gap between haves and have-nots are being issued with greater frequency, highlighting consequent risks to stability, security and fragile governance structures.

The dangers to the rest of the world as a result of these deteriorating conditions are stark and real.

While these concerns provide persuasive rationales for a focus on the debt question, there is one additional dimension we should consider that gives compelling cause. Against a backdrop of geopolitical strategic competition, addressing debt — particularly through a multilateral effort led by the United States and like-minded nations — can be a highly effective way to weaken the economic and political leverage that the People’s Republic of China (PRC) possesses over debtor nations. Played well, the approach may even enable a reversal of the inroads the PRC has made against nations and at the expense of the international rules-based system. 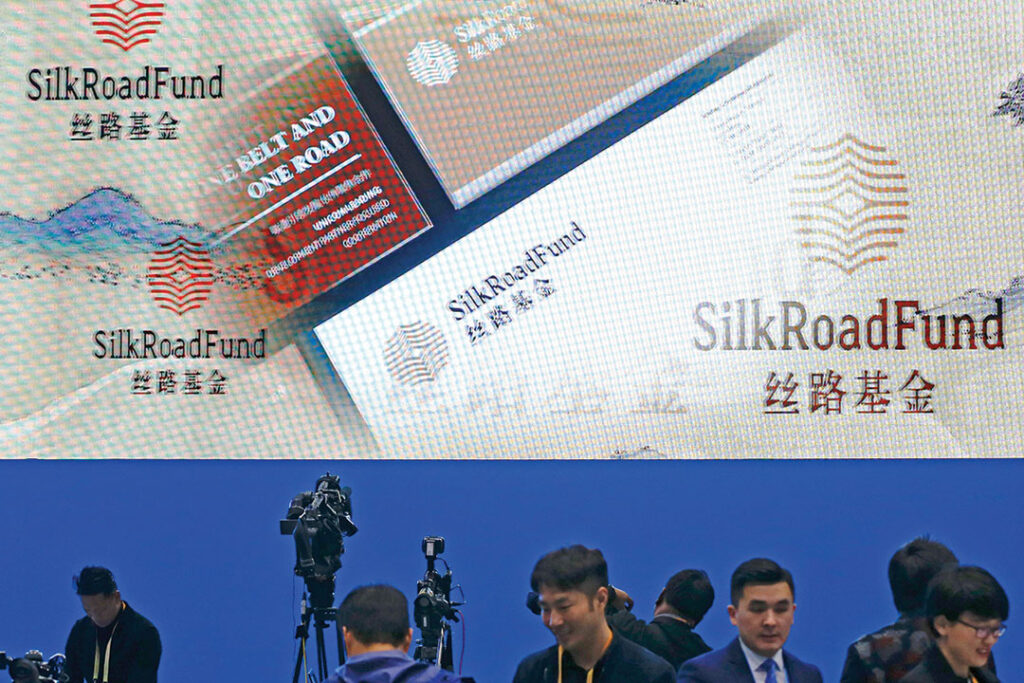 Journalists work near a screen promoting the People’s Republic of China’s One Belt, One Road (OBOR) infrastructure scheme at a Beijing forum in April 2019. At the time, many countries were pulling out of OBOR projects, which are now struggling under the economic effects of the coronavirus pandemic. THE ASSOCIATED PRESS

Without question, the immediate concern relates to relieving the debt burden faced by debtor nations. In international discussions, a variety of measures are proffered, ranging from the suspension and deferral of servicing repayments to emergency credit lines to enable these nations to meet their obligations. Both the IMF and World Bank, for example, have called for bilateral and multilateral creditors to urgently support a suspension of debt repayments. Both have also made available special credit lines that may be tapped to assist nations at greatest risk of default. These discussions emphasize a unified international approach to providing relief. It’s encouraging that such multilateral approaches are gaining traction among the world’s larger lenders.

However, one key lender has remained silent and eschewed such multilateralism: the PRC. Consistent with its debt-diplomacy playbook, it has chosen to engage bilaterally with individual debtors rather than risk being bound by any multilateral agreement aligned more consistently with internationally recognized financial norms. The PRC’s rejection of a multilateral pathway for debtor nations has sent a chilling message. Debtors are growing uneasy that Chinese relief may not be in the offing or, even if it is, that it will be insufficient and perhaps tied to conditions that may worsen their predicament. Alarming news concerning the impact of the economic crisis in China and widespread doubts about the robustness of recovery have only heightened fears that the PRC government will be less than magnanimous.

In this context of doubt, a more aggressive and unified international effort to provide urgent relief to debtor nations will yield huge dividends. Juxtaposing a unified multilateral humanitarian rescue package against a stubborn insistence on bilateral negotiations will throw into sharper relief the predatory nature of the PRC’s intent and marginalize it even further. A carefully constructed multilateral approach, built with safeguards preventing leakage or transfers to repay Chinese debt, will isolate any Chinese lending and facilitate direct attribution to Beijing of financial fallout resulting from such debt turning sour. Financially separating other assets from Chinese debt in this manner insulates debtor nations from deleterious consequences of default. With a lifeline tied to an alliance of international lenders, default on Chinese debt will have marginal impact on their credit standing. Should the PRC seek redress through punitive debt recovery measures, the world’s moral censure likely will be heaped on such an attempt. In the end, for the PRC, it may be less of a “debt trap” cunningly laid and more of a “credit trap” inadvertently fallen into — the only way out being to write off that debt, evaporating any strategic advantage. 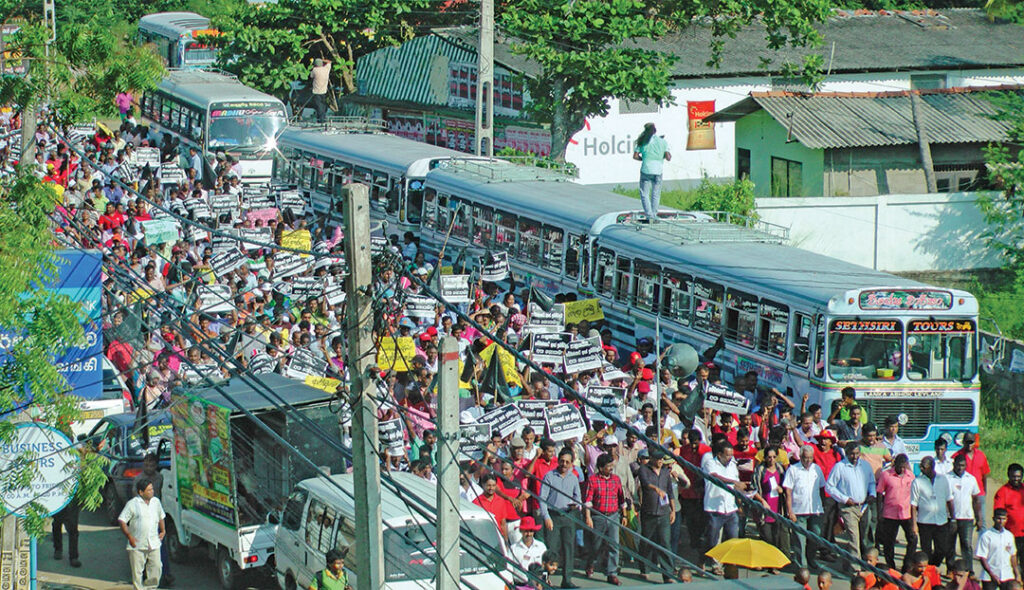 Sri Lankans protest in January 2017 the government’s plan to lease part of the Hambantota port to a Chinese-controlled joint venture in exchange for large loans. Unable to pay outstanding debt to Chinese firms, Sri Lanka handed over the main port to China on a 99-year lease in December 2017. THE ASSOCIATED PRESS

Looking beyond immediate debt relief priorities, debtor nations in the short to medium term will also need significant support to stabilize and eventually resuscitate their economies. Much in the same way advanced nations are embarking on fiscal stimulus packages of historic proportions, debtor nations will need similar measures to prevent their economies from collapsing. In all likelihood, new lending will be required to support such programs, together with some restructuring and refinancing of existing commitments, and perhaps even the retirement of some past debt. No doubt, the PRC may compete to offer lending to support fiscal stimulus and recovery processes. As suggested above, the PRC may be severely constrained by its own economic challenges and political priorities. Given this, a multilateral alliance of lenders may have a unique opportunity. Taking advantage of historic lows in interest rates and Chinese constraints, an aggressive push to fund government fiscal efforts may succeed in crowding out Chinese lending and rebalancing debt portfolios in debtor nations in favor of multilateral lenders. Any hegemonic economic and political influence the PRC may have enjoyed by dint of being a principal lender to the nation will be diluted or even reversed, denying it further strategic advantage.

The economic crisis also has contributed to a significant weakening of the PRC’s One Belt, One Road (OBOR) infrastructure scheme. It appears increasingly likely OBOR will not survive in its present form and will be reshaped significantly. To a degree, this was already in the cards with China’s slowing economic growth, demographic constraints, the trade war with the U.S. and a heavily overleveraged economy. The economic crisis has amplified these vulnerabilities and, with unemployment rising and business failures increasing, it is highly probable the policy focus will turn inward to domestic economic revival and political stability. A much-reduced OBOR program, together with more-diligent scrutiny on the economic viability of these projects, is likely. No doubt, the resulting reductions will be cushioned by state banks. There will be casualties, perhaps including delays to some OBOR projects that were already on hold around the world. Other initiatives that are tied to OBOR such as the state-owned investment fund known as the Silk Road Fund, which primarily covers Eurasia, may also be curtailed.

In that event, a big question for debtor nations will be: What do we do with these projects we have been saddled with, many with huge price tags and debt commitments? Some of these — for example, those in the vanity project category — can only be written off. Others may be economically viable and capable of contributing to development. An international alliance of lenders can save worthy projects, placing them on a sounder footing to resume and with a refinancing package to make them financially sustainable. As if the failure of OBOR projects would not be embarrassment enough for the PRC, this rescue would be further indictment of the folly and bankruptcy of the entire OBOR effort.

Some may ask: Where is all this money coming from? How can such a massive program of debt relief be underwritten? Isn’t this extremely risky? Without doubt, mind-boggling amounts will be involved. The U.S. and like-minded partners will have to dig deep to fund this effort. And there will be risks, with inflation a prime one to consider, particularly as a recovery gathers pace. These are all reasons why it is crucial to transition the conversation from nation-focused stabilization strategies to a broader international-focused discussion, emphasizing cooperation and coordination among major economic powers to amass the wherewithal to undertake this mission and guard against risks. What is needed is on the order of a global Marshall Plan rescuing not only nations but also the rules-based system itself. In the context of a strategic competition between a communist, authoritarian command system and a democratic, market-led system, the question should not be: Can we afford to do this? Rather: Can we afford not to do this?

This is not mere rhetoric. It is important to remember that one of the PRC’s key objectives in geopolitical competition is to weaken the international multilateral financial system and create a parallel rival centered on OBOR and the so-called Beijing Consensus. A multilateral approach led by the U.S. and like-minded partners in addressing the urgent debt challenge — especially if nested within key organizations and processes of the international rules-based system — will be a powerful antidote to these destabilizing efforts. Much as the foundations of post-World War II prosperity were laid prior to the end of hostilities through the Bretton Woods Agreement, we face a similar pivotal moment. Make no mistake, what we do now in answer to the debt challenge has the potential to shape the economic and financial order of the post-pandemic world to come. We cannot afford to let this opportunity to shape our economic and financial destiny slip by.

This article first appeared April 17, 2020, on Security Nexus, a free, open-access, international, peer-reviewed online publication for the Daniel K. Inouye Asia-Pacific Center for Security Studies. It has been edited to fit FORUM’s format.