Canada, France and the U.K. invest time and money to promote a free and open Indo-Pacific

The concept of a Free and Open Indo-Pacific region is gaining support globally. An increasing number of nations support  the notion that a prosperous, peaceful and stable region aligns with their own national strategies. Partnerships and programs are emerging in the Indo-Pacific with countries such as Canada, France and the United Kingdom, all aimed at ensuring the region thrives economically and politically. “For the first time, there’s a genuine appreciation that the center of gravity has shifted from the Atlantic to the Indo-Pacific,” Kasi Rao, Canada India Business Council president and chief executive officer, told Forbes.com in October 2019. “Therefore, we must get it right with Asia.”

The region for some time has captured the world’s attention due to its strategic importance. Roughly one-third of global maritime trade passes through the South China Sea alone, according to the U.S. State Department. Plus, nine out of the world’s busiest seaports are in the region. “The story of the Indo-Pacific in recent decades is the story of what is possible when people take ownership of their future,” U.S. President Donald Trump said in November 2017 at the Asia-Pacific Economic Cooperation Chief Executive Office Summit. “This region has emerged as a beautiful constellation of nations, each its own bright star, satellites to none.”

No wonder so many countries continue to cast their attention to what’s happening inside the Indo-Pacific. What follows is a synopsis of how Canada, France and the U.K. have invested time and money to show their commitment to the region and its sustained peace and prosperity. 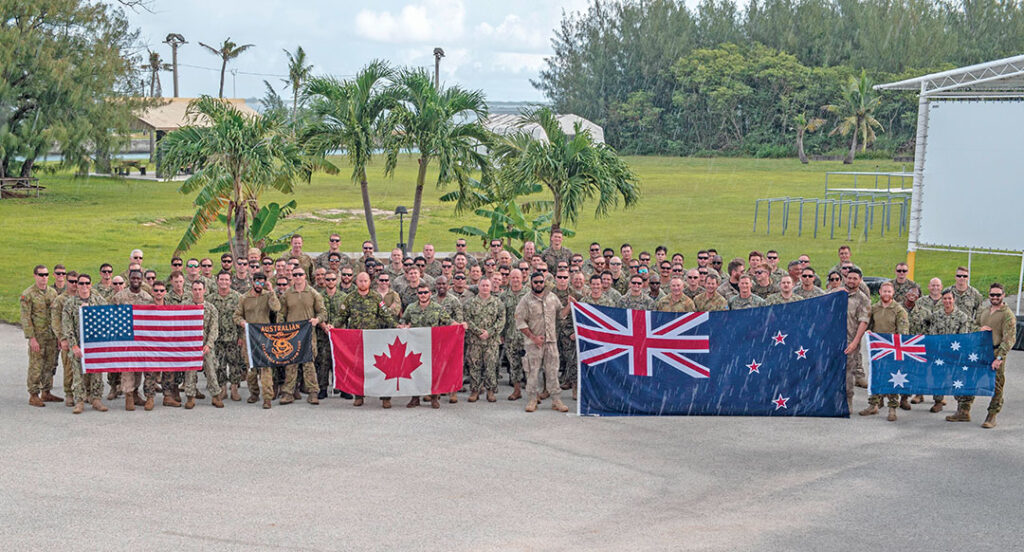 The growing economic and political events of the Indo-Pacific are of critical importance to Canada’s regional strategy regarding prosperity, development, inclusion, sustainability, peace and security. Since 2006, Canada has added 10 new diplomatic offices in China and India, committed new resources to the Association of Southeast Asian Nations (ASEAN) and, in March 2013, appointed Canada’s first resident ambassador to Burma.

Canada continues to power up its focus on the Indo-Pacific with plans to double its overseas exports by 2025. For context, the U.S. accounted for about 76% of Canada’s trade activities in 2000 while the Indo–Pacific accounted for only 10%, according to Forbes.com. In 2018, the figure for the U.S. shrank to 63%, while that of the Indo–Pacific grew to 17%, Forbes.com reported.

Canada is part of the Comprehensive and Progressive Agreement for Trans-Pacific Partnership, a free-trade agreement between Canada and 10 other countries operating in the Indo-Pacific, including Australia, Brunei, Chile, Japan, Malaysia, Mexico, New Zealand, Peru, Singapore and Vietnam. Once fully implemented, the 11 countries will form a trading bloc representing 495 million consumers and 13.5% of global gross domestic product, giving Canada increased access to key markets in the Indo-Pacific and Latin America.

As one of ASEAN’s longest-serving partners, Canada has made notable efforts recently to boost its engagement with Southeast Asia. Canada remains a key partner in counterterrorism efforts and disaster relief. With Vietnam stepping into the ASEAN chairmanship role in 2020, Canada has taken a keen interest in that bilateral relationship. Canadian vessels have increasingly visited Vietnam, and a formalized agreement was recently inked for Vietnam’s participation in Canadian military training. 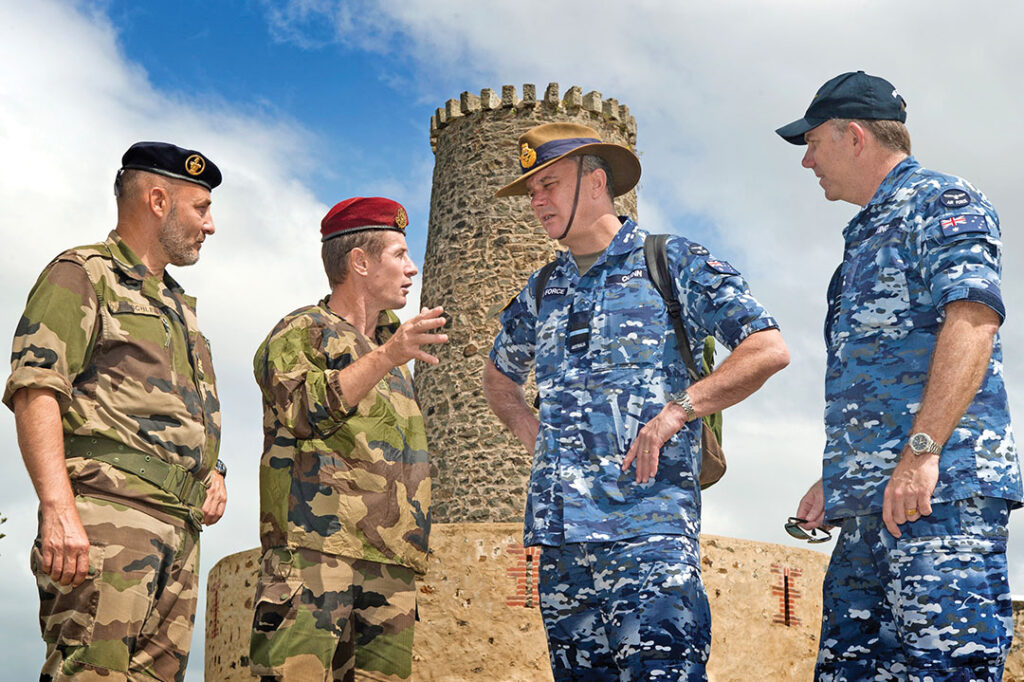 In May 2019, Vietnamese Defense Minister Ngo Xuan Lich became the first sitting defense minister to visit Canada since bilateral ties were established in 1973. In addition to talks on personnel training and sharing expertise on areas such as United Nations peacekeeping operations, the two countries discussed common regional and global interests, including the South China Sea and ASEAN. They also discussed ways to advance their defense relationship. Options include cyber security, disaster relief, and rescue and maritime security, including expansion of a law enforcement agreement between the two coast guards and welcoming Canadian naval ships for visits and drills, according to the online magazine The Diplomat.

In Northeast Asia, Japan has also asked for more Canadian engagement in the region. Japanese Prime Minister Shinzo Abe pitched closer defense cooperation with Canada, among other things, during a meeting with Canadian Prime Minister Justin Trudeau in April 2019. Abe wants increased information and personnel exchanges between the two militaries, and he also wants to work with Canada in international peacekeeping, an area where both countries share strengths.

“We share a lot of common value systems … in terms of human rights, support for democracy, good economic linkages,” Dave Perry, a defense expert at the Canadian Institute of Global Affairs, told the Canadian Broadcasting Corp. “But I think we’re also on the same side of some of the strategic issues in the region, where we want to promote open access, free trade and freedom of movement … something that has been in place for the last several decades enforced by the U.S. Navy in the Pacific, which has benefited both of our countries.”

According to a statement by the government of Canada, “Canada is committed to promoting a progressive approach to trade that fosters open markets, creates jobs, helps business become more competitive and drives growth across the Asia-Pacific region. To this end, Canada is working to ensure that trade discussions are informed by, and respond to, issues such as workers’ rights, the environment, gender equality and reinforcing the continued right of governments to regulate in the public interest.”

France has a significant military presence in the Indo-Pacific region, with 4,100 personnel permanently stationed in the Indian Ocean and another 2,900 personnel permanently stationed in the Pacific Ocean. These forces primarily ensure the protection of French territories and surveil exclusive economic zones. They also participate in humanitarian assistance and disaster relief (HADR) efforts and fight trafficking. “With territories and population in both the Indian and Pacific Oceans, France is a nation of the Indo-Pacific region and holds a distinctive place in this part of the world, from the African coastline to the seaboard of Americas,” Florence Parly, French minister of the Armed Forces, wrote in the foreword of the 2019 report “France and Security in the Indo-Pacific.” “France permanently maintains sovereignty and presence forces in the region to defend its interests and to contribute to the stability of the region alongside its partners, primarily India, Australia, the United States, Japan as well as Malaysia, Singapore, New Zealand, Indonesia and Vietnam.”

When it comes to HADR, France regularly offers its support by mobilizing its Army, Navy and Air Force assets. In the South Pacific, France works with Australia and New Zealand in accordance with the FRANZ Agreement among the three countries to coordinate disaster relief actions to states in need. A French advisor for civilian security is also based in Singapore to coordinate civil protection and crisis management cooperation in Southeast Asia.

France is the sixth largest economy in the world, and it boasts comprehensive and independent military resources as illustrated by its autonomous design and manufacturing of nuclear deterrence capabilities, satellites, fighter aircraft, submarines, ships, tanks and other combat vehicles.

France has a vested stake in the region with 1.6 million French nationals, several island territories in the Indian and South Pacific oceans and vast exclusive economic zones.  “France is not going anywhere, because we are part of the region,” Parly said in June 2019 during her speech at the Shangri-La Dialogue. “Our forces will be ready to face any kind of threats, whether from terrorism, organized crime, and any attempts to undermine French sovereignty. Some of these threats are straightforward, some insidious. We will confront them anyway. We will organize our presence, our prepositioned forces, our temporary deployments, to ensure a robust defense of our interests.”

France has five military commands and three sovereign bases in the region. In 2018, French forces seized 15 tons of drugs in the Indian Ocean — “enough to dope all the region’s sharks into oblivion,” Parly said. France supports building a regional security architecture and has taken steps to work closer with ASEAN, Parly said.

She also spoke to France’s commitment to a Free and Open Indo-Pacific, saying open access to maritime lines of communication in the region is key to the prosperity of Europe and the preservation of trade arteries that remain vital to the world. “This is a question of principle. Where rules are no longer the boundary of ambition, what security can there be for smaller states in the region? What is the meaning of sovereign equality, that cardinal principle of the U.N.?” Parly said during her Shangri-La Dialogue speech. “As for us, we will go about this issue in our own, steady, nonconfrontational but obstinate way. We will continue to sail more than twice a year in the South China Sea. There will be objections, there will be dubious maneuvers at sea. But we will not be intimidated into accepting any fait accompli, because what international law condemns, how could we condone?”

How a refocused U.K. will fit into the Indo-Pacific once Britain leaves the European Union remains unclear, but analysts expect a realignment of foreign policy interests to soon follow. In the meantime, the U.K. maintains strong ties with Australia and Japan, two of its closest Indo-Pacific security allies, and is working to raise its profile among Southeast Asian nations.

“The very nature of the U.K.’s future profile as an international leading actor is likely to be defined in the Asia-Pacific as a result of the country’s choices on how to engage with its complex security landscape,” Alessio Patalano, an East Asian security specialist at King’s College London, wrote in a 2019 report, according to Asia Times, a Hong Kong-based English-language newspaper. “As the region continues to ascend to prominence in international affairs, the U.K. faces a hard choice. It has to decide whether it intends to actively shape the regional security landscape, or merely to contribute in managing its transformation.”

The British government has shown that it plans to take an active role in its future relationships in the Indo-Pacific.  “The Pacific region is becoming ever more important to the U.K., with growing trade links and regional security issues that have global implications,” according to a December 2018 British Ministry of Defence report, “Mobilising, Modernising and Transforming Defence. We will increase our presence in the region, through our bilateral relationships and the Five Eyes and Five Power Defence arrangements groups. Together, we will stand up for the global rules, including freedom of navigation, that underpin our security and prosperity as an island trading nation.”

Then-British Defense Secretary Gavin Williamson spoke in early 2019 about getting as many British military resources forward based in Southeast Asia, further shedding a spotlight on the U.K.’s desire to be closer to its Indo-Pacific allies, strategically and physically. “This is our biggest moment as a nation since the end of the Second World War,” Williamson told the Sunday Telegraph newspaper in January 2019. “This is our moment to be a true global player once more — and I think the armed forces play a really important role as part of that.”

Williamson said during the June 2018 Shangri-La Dialogue that Britain intended to demonstrate its solidarity with the “rules-based system” in Asian waters by sending its warship to sail through the hotly contested South China Sea. “We have to make it clear that nations need to play by the rules and that there are consequences for not doing so,” Williamson said. “We must speak with one voice. … We want to look and see how we can do more with our allies in the region, have a bigger effect and make a bigger difference.”

Britain also promised to sail aircraft carriers in the Pacific once they’re operational in 2020. “Certainly, as we bring our two new aircraft carriers onstream in 2020, and as we renew and update our defense forces, they will be seen in the Pacific,” Kim Darroch, then-Britain’s ambassador to the U.S., announced in December 2016, according to Reuters. “And we absolutely share the objective of this U.S. administration, and the next one, to protect freedom of navigation and to keep sea routes and air routes open.”