The Asian Development Bank promotes growth, prosperity and sustainability in the Indo-Pacific

By tackling issues that range from economic disparity to disaster resilience, a Philippines-based multilateral development bank has been an engine for socioeconomic progress in the Indo-Pacific for decades.

The Asian Development Bank (ADB) was established in 1966 and headquartered in Manila. Its vision is to achieve a prosperous, inclusive, resilient and sustainable Asia-Pacific region, from Tbilisi to Tarawa. ADB uses a blend of loans, grants, equity investments, guarantees, technical assistance and policy dialogue as the primary instruments for achieving its objective to eradicate poverty and foster economic growth in its developing member countries (DMCs) across the region. ADB has played a central role in the region’s socioeconomic development, and as its largest donor, it will continue to play a forward role in the Indo-Pacific’s political, social and economic transformations.

In 2018, ADB provided more than U.S. $20 billion in sovereign loans and grants as well as private sector investments in development assistance to its DMCs. The majority of its resources are financing infrastructure, supporting policymaking and good governance, and improving socioeconomic development outcomes. In 2018, some of ADB’s major commitments by sector included energy (24%), transport (23%), natural resources and rural development (11%), public sector management (11%), and urban and water (10%).

ADB’s assistance is based on close consultations with its shareholders and DMCs as well as other development partners active in the region. The United States is one of the bank’s founding members and its “co-equal” largest shareholder, along with Japan. Collaboration between ADB and the U.S. has supported the steady growth of resources available to the bank’s member countries, and in turn, has played a key role in strengthening U.S. relations with countries across the region. 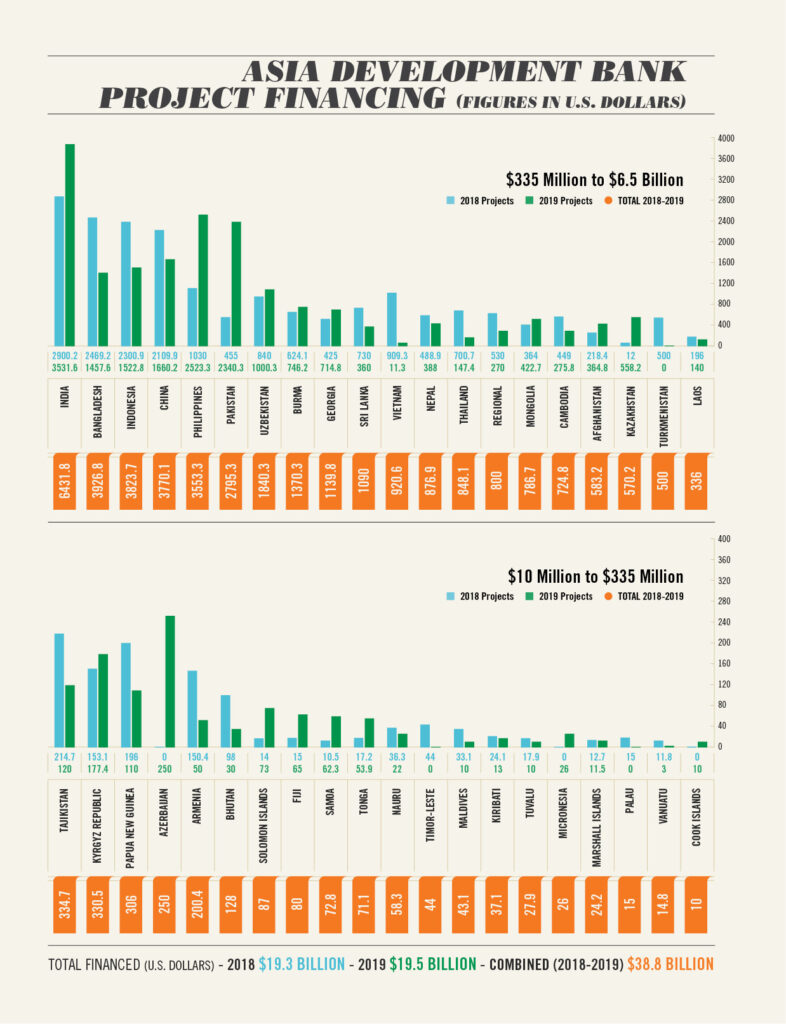 ADB is owned by 68 member countries. Of its 49 regional members, 44 are classified as DMCs and are therefore eligible to borrow and receive assistance. Ownership by regional and nonregional members is based on the purchased number of shares. The largest shareholders are Japan (15.6%) and the U.S. (15.6%), followed by the People’s Republic of China (PRC) (6.4%), India (6.3%) and Australia (5.8%).

The board of directors represents shareholders’ interests at the bank and approves all strategies, policies and economic assistance. The board of directors is in continuous session throughout the year and comprises 12 chairs, each led by an executive director. Nine of the chairs represent groups of countries, while three of the chairs are single constituency chairs from Japan, the U.S. and the PRC. ADB’s president is the chairperson of the board of directors and guides the bank’s operations, staff and management. ADB historically has been led by a Japanese national. ADB’s newest president, Masatsugu Asakawa, took office on January 17, 2020.

Operationally, ADB is organized into regional and support departments. The regional departments coordinate assistance between ADB and its borrowers. They oversee ADB’s field offices in borrowing countries and work closely with governments, the private sector and development partners to plan and implement country-specific assistance portfolios. The regional departments design and implement ADB’s country assistance, including ADB’s country partnership strategies and the country operations business plans.

ADB’s regional departments — listed according to their share of new commitments made in 2018 — are: South Asia (32%), Southeast Asia (29%), Central and West Asia (21%), East Asia (14%), and the Pacific (2%). The majority of regional departments are “on the ground” with 59% of ADB’s regional department staff located in resident missions in DMCs. This enables ADB to tailor its assistance so that it is responsive to domestic needs and aligned with ADB’s broader strategic priorities. ADB’s Private Sector Operations Department complements its regional teams by focusing on nonsovereign transactions to catalyze private investment.

ADB’s support departments provide a range of help for ADB’s internal operations (such as communications, legal counsel and internal evaluation) but also in designing and implementing projects in thematic or sectoral areas such as climate change or energy. Some examples of ADB’s nonregional departments include the Economic Research and Regional Cooperation Deparment, the Sustainable Development and Climate Change Department, the Department of Communications, and the Independent Evaluation Department.

All of ADB’s departments, staff and consultants strive for a “One ADB” approach, which encourages sharing knowledge and expertise across the organization to effectively implement ADB’s guiding strategy.

Although Strategy 2030’s priority areas provide the framework for ADB’s operations, its country programming is carefully designed around a DMC’s needs, financial and technical absorptive capacity, and each DMC’s socioeconomic development status. ADB’s blend of concessional and market-based lending modalities, paired with grants and technical assistance, allows it to deliver country-appropriate financial assistance alongside constructive policy dialogue and support for private sector development.

ADB has different lending terms for its DMCs. It uses a three-tiered classification system to determine whether a DMC is eligible to borrow at near-market rates from ADB’s ordinary capital resources (OCR), at concessional loan terms, or to receive grants from the Asian Development Fund (ADF). Lending terms are based on the DMC’s gross national income per capita, creditworthiness and risk of debt distress. ADB’s lending operations generate income that covers administrative expenses, grow the bank’s capital base, and help finance technical assistance and grants. Donors fund the bulk of ADF, replenishing the grant window on a four-year cycle. The U.S. is the second-largest historical donor to ADF after Japan.

ADB in the Indo-Pacific

ADB is the largest regional development bank in the Indo-Pacific region, with more than U.S. $20 billion of assistance in loans, grants and other commitments per year. ADB also has one of the longest legacies of providing development assistance in the region— more than 50 years — allowing it to establish unparalleled relationships with governments and private sector stakeholders throughout the region. But ADB’s financial capacity and deep relationships are not the only reasons it is a premier development bank. ADB’s suite of policies, covering debt sustainability, environmental and social safeguards, procurement, anticorruption and integrity, are a cornerstone of the institution. These policies are in line with best international practices and represent the gold standard of high-quality, sustainable investments.

As a trusted multilateral development partner, ADB often plays a convening function for governments, development partners and bilateral donors active across the Indo-Pacific. U.S. leadership at ADB is therefore an important element for planning and delivering assistance programming and investments in the region.

Due to its established role in the region, a recent report by the Center for Strategic and International Studies (CSIS) recently characterized the ADB as a “strategic asset of the United States.” The report noted that: “As of 2018, the U.S. had $23 billion committed in overall capital subscription, with an additional $1.9 billion committed to co-financing projects. The co-financed programs have been spread across several countries in the region, including India, Vietnam and Nepal. The U.S. has also invested in multidonor trust funds, such as the Afghanistan Infrastructure Trust Fund, which has pursued private sector co-financing for infrastructure improvement.”

Though the Treasury Department leads the U.S. engagement at the ADB, the bank also regularly engages with a variety of U.S. departments and agencies including the State Department, the U.S. Agency for International Development, the U.S. DFC, the Environmental Protection Agency and the Interior Department, among others. The CSIS report highlighted the collaboration between ADB and the U.S. Trade and Development Agency to launch a global procurement initiative with bankable projects for the Indo-Pacific region. The Overseas Private Investment Corp. also worked alongside ADB to co-finance a bank and a private equity fund, both in India. Finally, U.S. companies such as General Electric and Citibank have worked closely with ADB as co-financers providing private sector capital and expertise.

As one of the largest shareholding members in the bank, the U.S. has been supportive of ADB, and at the same time, benefits considerably from its membership. The U.S. provides financial capital and technical expertise while ADB provides a highly visible multilateral platform from which the U.S. can support and direct sustainable development efforts across the Indo-Pacific.

Paul Curry is the principal operations coordination specialist at the Asian Development Bank.