U.S. Sen. Daniel K. Inouye called for the development of a center to serve the Indo-Pacific region after the success of the George C. Marshall European Center for Security Studies, which serves the European region. Inouye, a recipient of the Medal of Honor and the Purple Heart in World War II, represented Hawaii in the House of Representatives and the Senate for 53 years until his death in 2012. 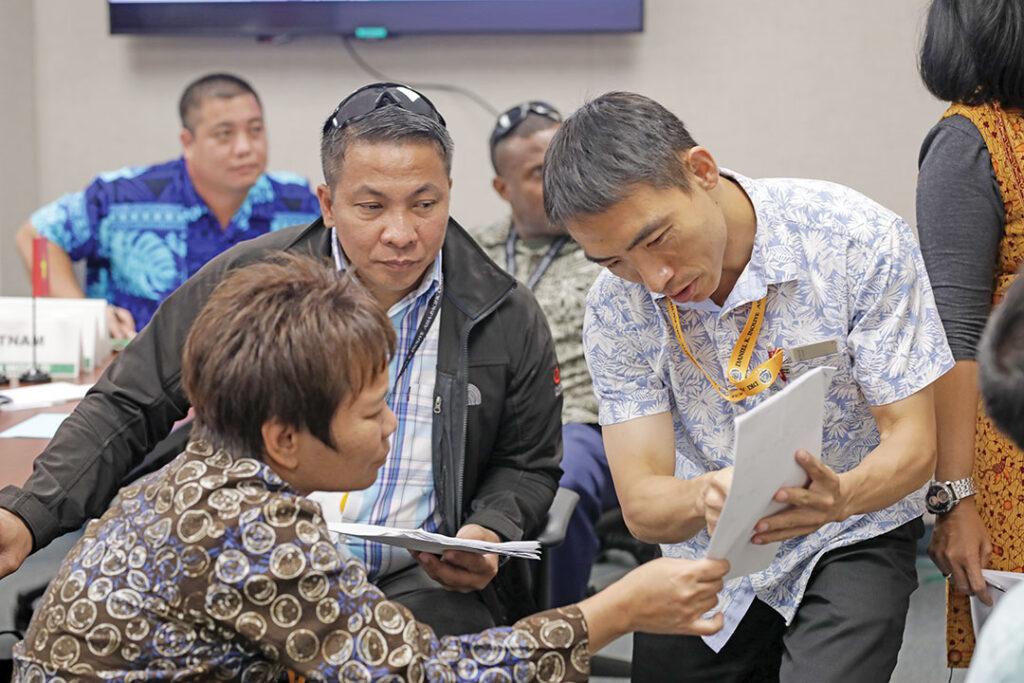 Fellows from the Advanced Security Cooperation course collaborate during an exercise.

In December 1994, the then-commander-in-chief Pacific Command (today known as commander, Indo-Pacific Command) approved the formation of a center working group headed by Col. Jimmie Lackey, who would become executive director in 1997.

The institute, based in Honolulu, Hawaii, was established in 1995, with Lt. Gen. Hank Stakepole as president, to foster understanding, cooperation, and study of security-related issues among military and civilian representatives of the United States and other Asia-Pacific nations.

Before opening its doors, however, the center was officially named the Asia-Pacific Center for Security Studies. The organization started with fewer than 10 employees and grew to about 120 staff and faculty members today.

“The center started out literally in a broom closet at PACOM [Pacific Command] headquarters,” according to one of the center’s first employees, Lenore Patton, who still serves as head of the Regional Engagement Outreach program. “Eventually, we needed to move into a space where we could hold our courses and which would also provide easy access to housing for our fellows.”

The center’s curriculum has come a long way since its founding. Today’s five-week Advanced Security Cooperation (ASC) course is a far cry from the first executive course. In the recent ASC course, 117 fellows came from 34 locations around the world. Demographics of attendees included 49 (42%) military, 57 (49%) civilian (including nongovernmental organizations, media, think tanks and regional organizations) and 11 (9%) law enforcement. Twenty-seven women, or about 23% of the total fellows, attended the course.

“I’ve been to several other courses like this before, but what I found unique here is that APCSS makes us feel to be part of a big family, where we share about our own cultures and we get to learn about other cultures,” explained Lailufar Yasmin, a recent ASC fellow and professor of international relations, Daka University, Bangladesh. “We learn about the differences, we are able to get rid of our preconceived ideas and biases. While we’re talking about security cooperation, if we cannot get rid of our biases, we cannot thrive, we cannot cooperate with each other. So this is something we learned in negotiation skills that was extremely valuable.”

In addition, DKI APCSS started a tradition of hosting a number of conferences to bring together security practitioners on such issues as global security trends and U.S.-China defense relations, food security and political stability, and island state security. 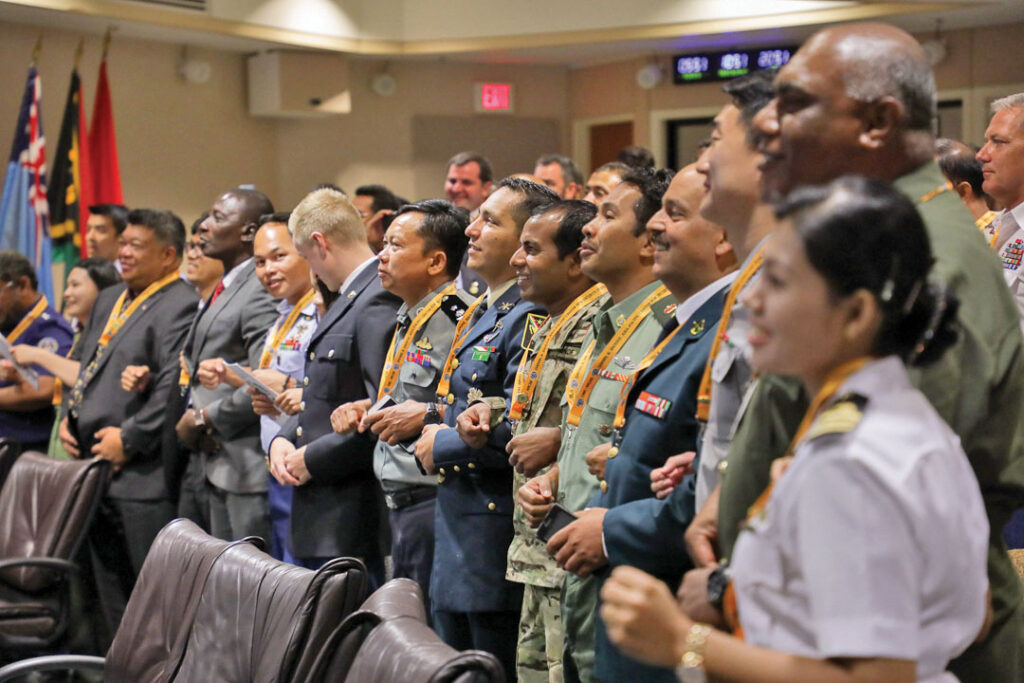 Faculty and fellows participate in the Comprehensive Maritime Security Cooperation course. About 25% of the attendees were women.

In 2012, retired U.S. Air Force Lt. Gen. Dan “Fig” Leaf took over as director. During his tenure, he promoted “women, peace and security” and “good governance” as topics for center courses and workshops. In mid-2012, the APCSS opened Maluhia Hall. The dedication ceremony was the last time Sen. Inouye visited the center. After Inouye died, a Hawaii legislator submitted a bill to the U.S. Congress to rename the center the Daniel K. Inouye Asia-Pacific Center for Security Studies. The name change took effect in 2015.

Retired U.S. Navy Rear Adm. Pete Gumataotao joined the center in 2018. Since then, DKI APCSS has supported the Office of the Secretary of Defense for Policy with special workshops on topics such as a Free and Open Indo-Pacific strategy, Association of Southeast Asian Nations defense ministers working group meetings on disaster management and many others.

Over the years, DKI APCSS has opened its doors to more than 14,000 security practitioners from not just ministries of defense, but ministries of foreign affairs, customs and immigration, justice, social services, emergency services, as well as law enforcement, think tanks, academics, and members of the media. Six of the center’s alumni have gone on to become presidents or prime ministers, 11 have become vice presidents or deputy prime ministers, and 33 have become chiefs or deputy chiefs of defense.

DKI APCSS continues to foster the relationships made with the fellows who attend courses and workshops individually and through 59 DKI APCSS alumni associations around the world.

Today’s alumni are celebrated for the completion of their fellows projects, which include drafting national policy documents, writing analytical papers, reforming procedures, among other works. DKI APCSS alumni have executed successful security plans for national elections and major international sporting events, and even peace treaties.