Almost half the global population uses social media daily, according to WeAreSocial.com’s 2019 digital report, a global social media agency that tracks usage worldwide. While personal connections remain the top reason for social media use, other areas such as e-commerce and research have grown significantly in the past five years, as illustrated by a 2018 study by GlobalWebIndex, a market research firm.

“There’s an ongoing and gradual transition taking place, whereby personal sharing is becoming more of a side dish than the main fare,” said Olivia Valentine, an insights analyst at GlobalWebIndex. “It’s now purpose-led activities that traditionally lay outside the social arena that are drawing consumers in.” 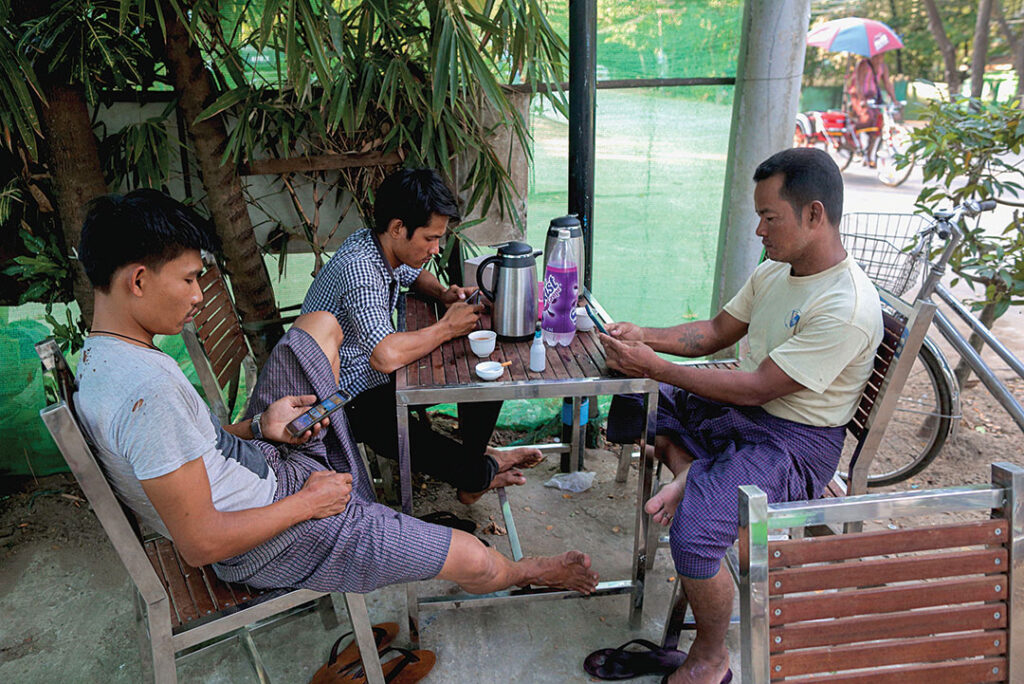 Men use smartphones at a tea shop in Yangon, Burma. AFP/GETTY IMAGES

With the Israel and Hamas war spillover onto Twitter in 2012, military and security sectors began embracing social media as an operational tool. The online platform has become another battlefield, as described in the book LikeWar: The Weaponization of Social Media, by P.W. Singer and Emerson T. Brooking.

“Through the weaponization of social media, the internet is changing war and politics, just as war and politics are changing the internet,” according to the LikeWar website. “Terrorists livestream their attacks, ‘Twitter wars’ produce real‑world casualties, and viral misinformation alters not just the result of battles, but the very fate of nations. The result is that war, tech and politics have blurred into a new kind of battlespace that plays out on our smartphones.”

Social media has long been the domain of public affairs offices. However, the need to share or gather information has expanded into other operational areas to include information operations, intelligence, as well as disaster and crisis management. With the operationalization — and even weaponization — of information, the ability to clear data for public release has gone beyond the public affairs realm.

While legitimate concerns and risks associated with using social media as a staple communications platform exist, the advantages it provides to organizations outweigh those concerns. Social media is not a phenomenon that will go away in the near future, thus, if implemented correctly, it can be a force multiplier. 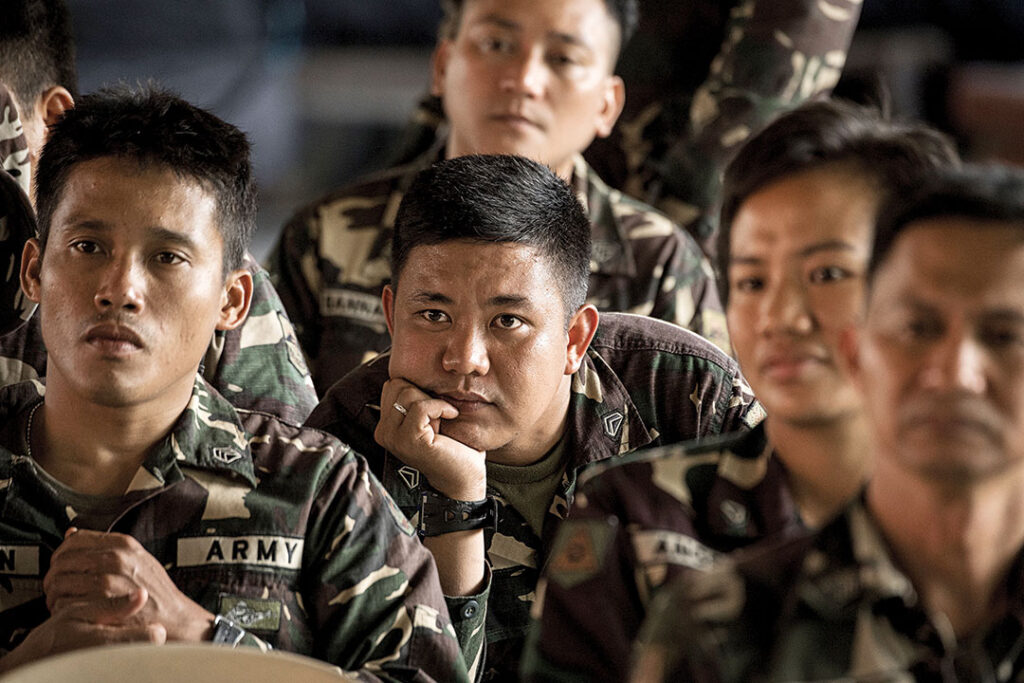 The biggest risks come from lack of planning

With the operationalizing of information, especially in areas of disaster management or counterterrorism, the authorization process to clear information for timely public release can overwhelm an understaffed public affairs office. Most public affair offices are not staffed to track, maintain and analyze information on multiple social media channels to support these additional functional areas.

At a November 2018 conference on social media in the military and defense sectors, a U.S. Army digital communications specialist stated, “You wouldn’t send a Soldier into a battle without a rifle,” as he explained the importance of providing training for Soldiers who work on social media accounts.

Clear planning and training are essential to meet the growing demands of a presence on social media. When planning to implement social media and other apps for military or security programs, it’s essential to determine:

Facebook continues to dominate the global social landscape and remains strong in places such as Burma, Indonesia and the Philippines. However, many young people, especially in the U.S., have stepped away from Facebook in favor of Instagram and Snapchat. Many also skip Google and use YouTube as their main search engine, an indication that producing quality video is as important as written text in the virtual world.

Such platforms are restricted inside China, where Tencent is the primary social media platform that continues to weave into people’s everyday life. With it, comes government approval for its use and government tracking. Because of such restrictions on how certain populations consume information, it’s important to not only understand the intended audience but also where they live both physically and virtually. 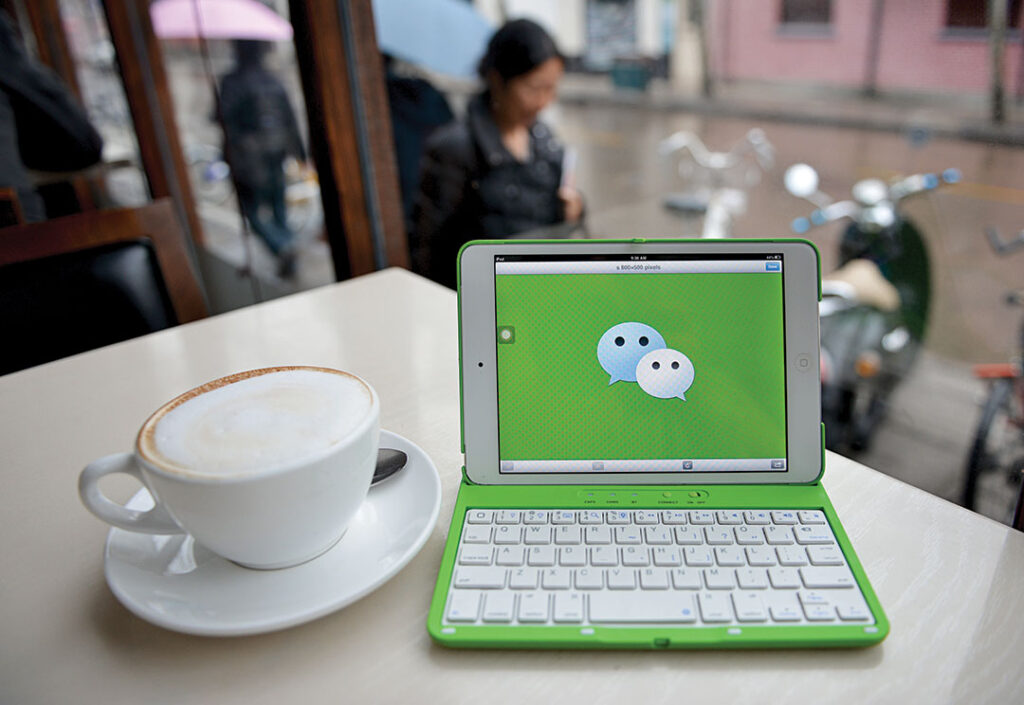 Many social media platforms have figured out how to monetize information flow. As a result, a simple post on a Facebook page may have little or no impact. These posts no longer automatically appear in people’s newsfeeds — even if they are page subscribers. For posts to get the intended reach, the disseminator of the information must build engagement. This means having someone dedicated to responding to every comment and asking questions to start conversations.

The alternative is paying for post promotion. The notion of paying for information promotion on social media varies by country. In the U.S., payments for social media boosts are only authorized for the recruiting services. As a result, many military public affairs offices have seen engagement rates on social platforms fall, forcing them to focus on organic engagement.

Social media and disaster management
Many governments are creating apps to help better coordinate information during disaster response. Some apps are operated at the federal government level. In large geographic areas, many operate at city levels.

For example, in 2014 the government of the Philippines partnered with Rappler, a Philippines-based online news website, to develop an app to share information called Batingaw. Since then, a number of other apps have appeared to support specific areas such as metro Manila.

Sharing bad information is a risk on social media; however, what is riskier is often the lack of sharing — resulting in not meeting the audience’s expectations.

Audience expectations often defy government approval process timings. During the Hawaii missile scare in 2018, the Hawaii Emergency Management Agency (HEMA) shared information about an imminent attack through television and mobile phone alerts. It took 15 minutes for the situation to be identified as an error and receive approval to release all-clear messages. HEMA posted a correction on Twitter 17 minutes after initial message and 45 minutes later on the same channels where the erroneous messages were broadcast. It took 38 minutes before authorities issued an official statement, according to most news reports.

While a half hour may seem a quick response in a normal working environment, it can be excruciatingly long in crisis situations. While people were angry about the mistake, the perception that the government took an excessive amount of time to share corrected information and even useful information on how to protect themselves made them even angrier.

Nongovernmental organizations (NGOs) are also getting into the information-sharing business, especially in situations where people do not trust government-released information. While having an NGO assist with the process can be beneficial, especially where there are manpower constraints, it also means abdicating responsibility for information sharing to a third party.

Social media usage continues to evolve, according to WeAreSocial.com’s “Social in 2028” report. Messaging platforms such as WhatsApp and Snapchat continue to expand their reach. Virtual reality and augmented reality continue to change the user experience. Some argue that Facebook will overpower all other platforms to become a super platform, while others expect that the entire networking experience will change as social media becomes fully integrated into basic work and home applications.

Privacy issues and both government and corporate controls are still being debated. There are those willing to give up their privacy for convenience. Still, strong concerns remain about governments taking over social media and using it to track citizens.

There tends to be three different philosophies when it comes to controlling social media. The U.S. philosophy leans toward supporting corporate interests. The European Union policy is to protect individual privacy over corporation profits. The People’s Republic of China philosophy is to support full government control of social media.

The world won’t see a particular social media policy become the global norm for some time. Whether a uniform policy or myriad approaches evolve, one thing remains clear that the military and security sector should note: The use of social media is unlikely to go away.