Soldiers could control defense systems with their minds

The arrival of user-friendly computer tablets, smartphones and smartwatches accelerated the adoption of wearable technologies that provide everything from biometric monitoring of blood pressure, heart rates and hours slept to weather updates and navigational guidance.

The world’s militaries have taken this technological evolution to new levels with increasingly sophisticated human-machine interfaces, such as wearable devices that diagnose and treat combat illnesses and wounds, augmented reality programs that aid battlefield decision-making and exoskeletons to help Soldiers increase their strength and endurance. A growing field of research promises a much deeper connection between humans and machines.

Defense researchers are developing neurotechnology that could one day enable warfighters to interact with artificial intelligence-enabled machines without the need for a keystroke, voice command or even flipping a switch. Using neural interface technology, pilots theoretically could control swarms of unmanned aerial vehicles (UAVs) using only their minds. 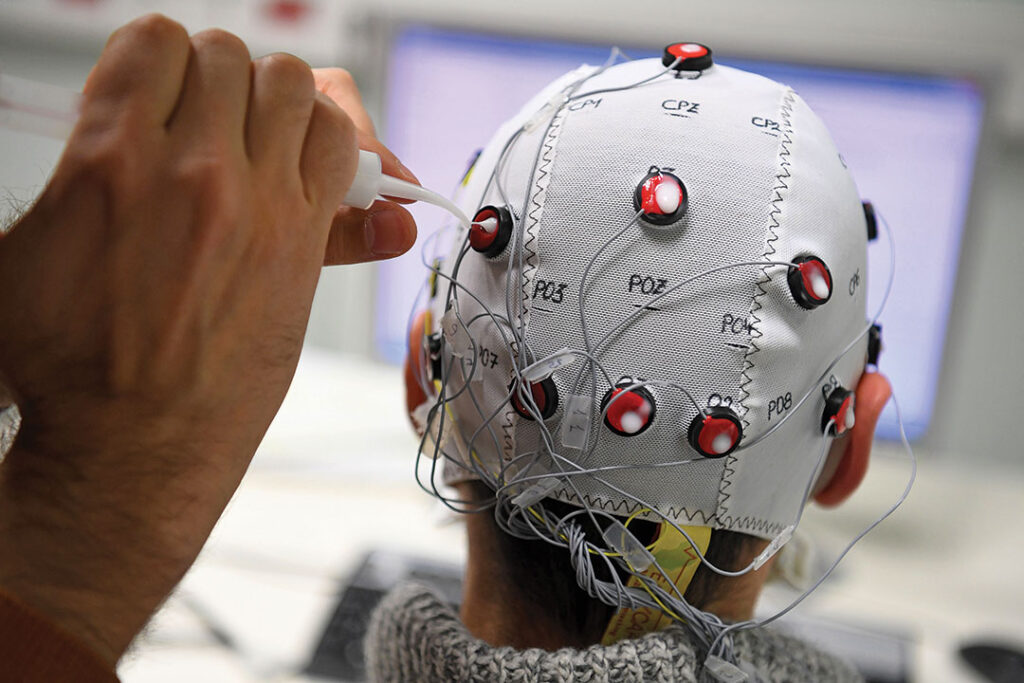 A researcher at the French National Center for Scientific Research tests a brain-computer interface. The interface allows the user to select symbols on a screen without using voice or hand commands. AFP/GETTY IMAGES

“Neural interfaces are tools for conveying information to and from a human and a machine,” Dr. Al Emondi, program manager at the Biological Technologies Office at the U.S. Defense Advanced Research Projects Agency (DARPA), said in an interview with the Nextgov.com website. “The concept is roughly similar to any other means of communicating with a computer or smartphone to accomplish a task — think about voice commands, a touch screen, a keyboard or a mouse — but this technology bypasses the intermediate step of a physical action.”

“What neural interfaces promise is a richer, more powerful, and more natural experience in which our brains effectively become the tool, enabled by the interface system,” Emondi said. “For the first time, rather than adapting ourselves to the tools we use to accomplish a task, neural interfaces have the potential to adapt to us.”

The government is working with Battelle Memorial Institute, Carnegie Mellon University, Johns Hopkins University Applied Physics Laboratory, Palo Alto Research Center, Rice University and Teledyne Technologies on the N3 program. Until now, neural interfaces have been surgically invasive and mostly used to restore motor functions to injured troops. The goal of the N3 project, however, is to quicken data processing and decision-making without surgery for use on able-bodied Soldiers.

The technology could give Soldiers and commanders a “superior level of sensory sensitivity and the ability to process a greater amount of data related to their environment at a faster pace, thus enhancing situational awareness,” according to an August 2019 article by Chatham House, an independent policy institute in London. “These capabilities will support military decision-making as well as targeting processes.” 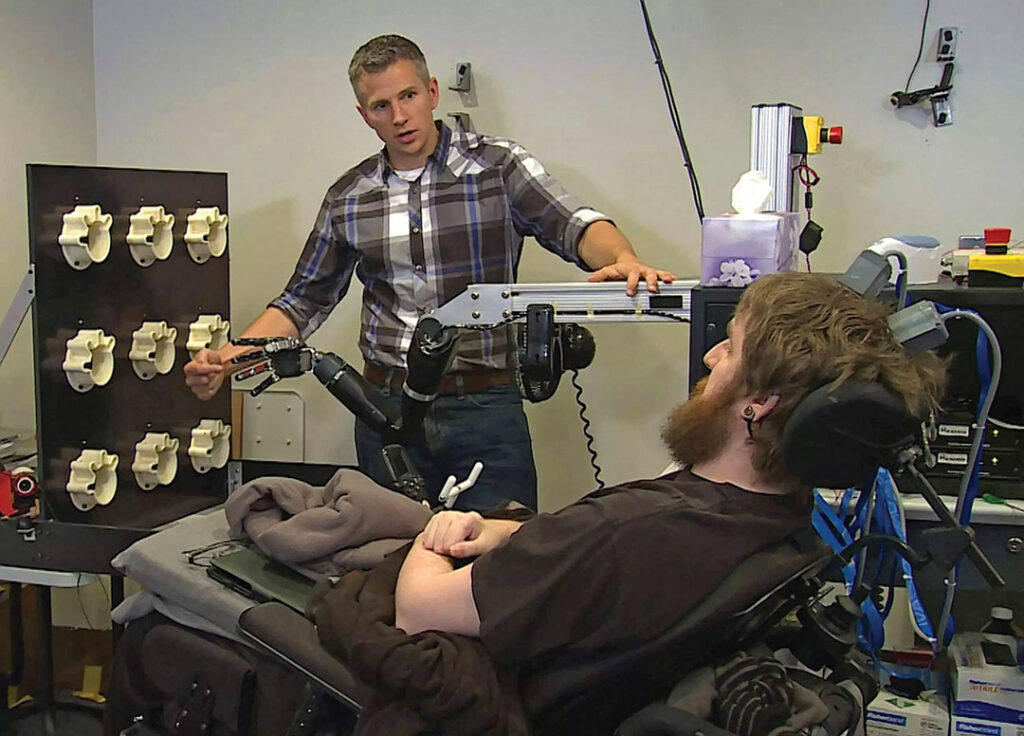 Quadriplegic Nathan Copeland underwent surgery to have four microelectrode arrays placed in his brain. The arrays connect to a robotic arm, which contains sophisticated sensors that detect pressure applied to its fingers. University of Pittsburg medical Center/Pitt health sciences

The challenge for DARPA’s partners is to eliminate the need for surgery. “DARPA has made impressive progress in recent years demonstrating what is possible using electrodes implanted in or on the brain for the purpose of restoring function to ill or injured service members and veterans,” Emondi said. “However, because of the inherent risks currently involved with brain surgery, these invasive technologies are not ethically justifiable except in cases of medical necessity.”

The N3 teams are all pursuing projects that would make brain signals easier to read, such as developing injectable, inhaled or ingested nanoparticles that would bind to neurons and amplify the signals. The signals would be read by a system placed in a cap or embedded in a headrest.

In addition to controlling ground robots or drone swarms, the technology could allow militaries to monitor a complex cyber network with a neural interface or keep up with huge flows of data by presenting information in a digestible way at machine speed, DARPA officials said.

Leading one of the teams is a scientist from the Indo-Pacific region. India native Gaurav Sharma, a senior research scientist at Battelle, is leading a team that won a U.S. $20 million contract from DARPA to develop a system that could allow a Soldier to control multiple UAVs or a bomb disposal robot with his thoughts. Battelle’s N3 program has been named BrainSTORMS (Brain System to Transmit Or Receive Magnetoelectric Signals).

“This is one of the most exciting and challenging projects I have worked on,” Sharma said, according to a May 2019 report in The Tribune, a newspaper in northern India. “With BrainSTORMS, we will again be pushing the limits of engineering and physics.”

The idea of improving human learning, healing, performance and decision-making through neural interface technology is drawing worldwide interest. The People’s Republic of China reported in May 2019 that its scientists had achieved a breakthrough with a brain-computer interface (BCI) chip, according to state news agency Xinhua. Called Brain Talker, the technology debuted at the World Intelligence Congress in northern China.

Brain Talker allows a person to control a computer or electronic device using only brainwaves, Xinhua reported. Co-developed by Tianjin University and China Electronics Corp., Brain Talker identifies minor neuron information sent by the brainwave from the cerebral cortex and then decodes the information and speeds up the communication between the brain and the machine. The scientists hope to enhance the chip for use in the fields of medicine, education and gaming. 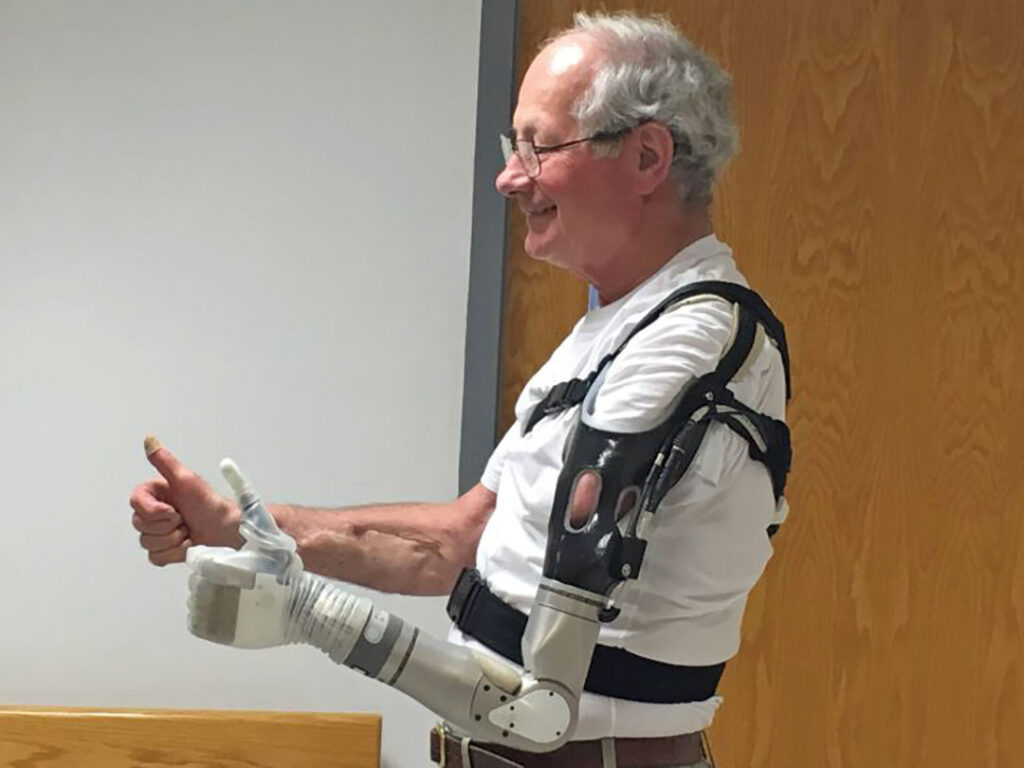 A military veteran demonstrates the Life Under Kinetic Evolution arm system, which promises near-natural arm and hand motion. The arm is part of the Revolutionizing Prosthetics Program at the U.S. Defense Advanced Research Projects Agency. DARPA

South Korea is conducting similar research at the Brain Signal Processing Lab of Korea University. Researchers there are using magnetic resonance imaging, commonly known as an MRI, and electroencephalography with a goal of constructing either a brain-computer interface or a brain-machine interface. The lab wants to use data analysis and machine learning to diagnose psychiatric conditions and neurological diseases, including mild cognitive impairment, Alzheimer’s disease, sleep disorders, epilepsy and depression.

Two U.S. companies are even researching how neural interface technology can improve driver safety. Trimble Inc., based in California, and Massachusetts-based Neurable Inc. have entered a partnership to explore the use of brain-computer interfaces that will track brain signals and eye movements to improve training efficiency and driver safety.

While controlling robots with brain waves could be on the horizon for able-bodied troops, injured Soldiers can also benefit from neural technology advances. DARPA in February 2019 launched a program geared toward smart and adaptive wound recovery through the use of bioelectronics, artificial intelligence, biosensors, tissue engineering and cellular regeneration. The Bioelectronics for Tissue Regeneration (BETR) program aims to limit the prolonged pain and hardship for Soldiers who suffered blast injuries and burns.

“Wounds are living environments, and the conditions change quickly as cells and tissues communicate and attempt to repair,” BETR program manager Paul Sheehan said in a statement. “An ideal treatment would sense, process and respond to these changes in the wound state and intervene to correct and speed recovery. For example, we anticipate interventions that modulate immune response, recruit necessary cell types to the wound or direct how stem cells differentiate to expedite healing.”

DARPA intends to use any available signal — optical, biochemical, bioelectronic or mechanical — to monitor physiological processes and then stimulate them to bring healing and speed recovery.

“To understand the importance of adaptive treatments that respond to the wound state, consider the case of antibiotic ointments,” Sheehan explained. “People use antibiotics to treat simple cuts, and they help if the wound is infected. However, completely wiping out the natural microbiota can impair healing. Thus, without feedback, antibiotics can become counterproductive.”

Civilians and Soldiers who have lost the function of their limbs or have undergone amputations are also benefiting from BCI technology. Scientists in Japan are using it to improve the limb function of stroke patients. Researchers at Tokyo University of Agriculture and Technology have found that stroke patients who observe their own hand movements in video-assisted therapy can speed up rehabilitation.

A stroke can paralyze a patient by obstructing blood flow to the brain, so promoting brain plasticity where a healthy region of the brain fulfills the function of a damaged region can help a person recover motor functions, the scientists said in a July 2019 reported in IEEE Transactions on Neural Systems and Rehabilitation Engineering, a monthly peer-reviewed scientific journal. To promote plasticity, stroke patients may incorporate motor imagery, which allows them to mentally simulate an action by imagining themselves going through the motions. BCI technology detects and records the motor intention while they observe the action of their own hand or the hand of another person.

Brain research has generated increasing publicity as high-profile players such as Tesla billionaire Elon Musk and Facebook have unveiled brain-machine interface projects. Musk established a company called Neuralink, which in July 2019 revealed a project to use a brain-machine interface to help paralyzed people type with their minds. Facebook, on the other hand, is working on a noninvasive, wearable device that would allow people to type by simply imagining themselves talking.

These new frontiers raise fundamental ethics questions. One concern, according to ethicists, is that linking machines with a human brain could raise a question about whether that person remains self-governing.

“In the case of a device for monitoring blood glucose that automatically controls insulin release to treat diabetes, such decision-making on behalf of a patient is uncontroversial,” stated a July 2019 article in the scientific journal Nature. “But well-intentioned interventions in the brain might not always be welcome. For instance, a person who uses a closed-loop system to manage a mood disorder could find themselves unable to have a negative emotional experience, even in a situation in which it would be considered normal, such as a funeral.”

While it’s common for militaries, governments and research hospitals to work with ethicists to establish ethical guidelines for applying new technology, commercial operations are often “notoriously covert and subjected to minimal oversight,” the Nature article said.

A key challenge will be how much effort countries exert to maximize the potential of the technology while still protecting privacy. Digitally stored brain data could be stolen by hackers or used by companies to whom users grant access, said ethicist Marcello Ienca at the Swiss Federal Institute of Technology in Zurich, according to the Nature report. “Brain information is probably the most intimate and private of all information,” Ienca said.